Not all supercars have to be hard work and feel brash. So says Maserati, whose MC20 picks up the mid-engined reins from the 1971 Bora as a usable, liveable and above all likeable supercar.

Yellow and blue – the colours not only of the flag of Ukraine, but also the city of Modena, and by association, the most famous child of that city, Maserati. Yellow and blue – the colours at two opposite ends of the Maserati supercar spectrum, separated by 50 years. You might think there’s an insurmountable divide between the 1971 Bora and the 2022 MC20, but this pairing of first and last mid-engined Modena mounts has more in common than you might at first suppose. Those similarities extend well beyond their shared mid-engined format. For instance, both were marketed as grand touring supercars, easy to live with on a day-to- day basis, in sharp contrast to the highly challenging nature of most rival supercars. Rarity also links them. Between 1971 and 1978, just 524 Boras were built, a mere 42 of which were right-hand drive (as here), 38 of which came to the UK. The UK allocation for the MC20 is also very limited – for instance, just 40 of the new open-top Cielo will arrive here in the first year. Citroën owned Maserati from 1968 to 1975, and in a twist of fate Maserati is today alongside Citroën again (as part of Stellantis). And both cars cost the same to buy today: the MC20’s £190k price tag is roughly what you’d pay for a nice Bora. 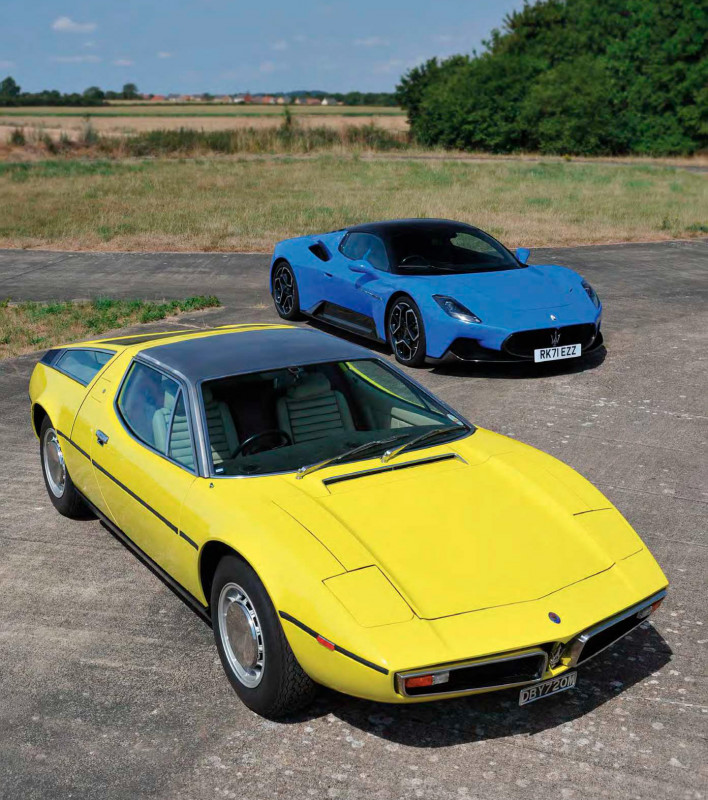 Don’t they look great in their respective colours? Blu Infinito for the MC20 and Giallo Sprint for the Bora, an official but modern Maserati hue that zings much more than the original 1970s yellow (which owner Matt Briffa describes as “eggy”). Personally, I’d be inclined to swap them around: I think the MC20 looks best in yellow, while the Bora suits a more subtle shade. But I’m certainly not complaining.

“ There’s a definite link with the Bora’s oh-so-seventies ‘banana’ seats in the MC20’s curvaceous chairs, even if they channel ultra-modern sci-fi vibes ” 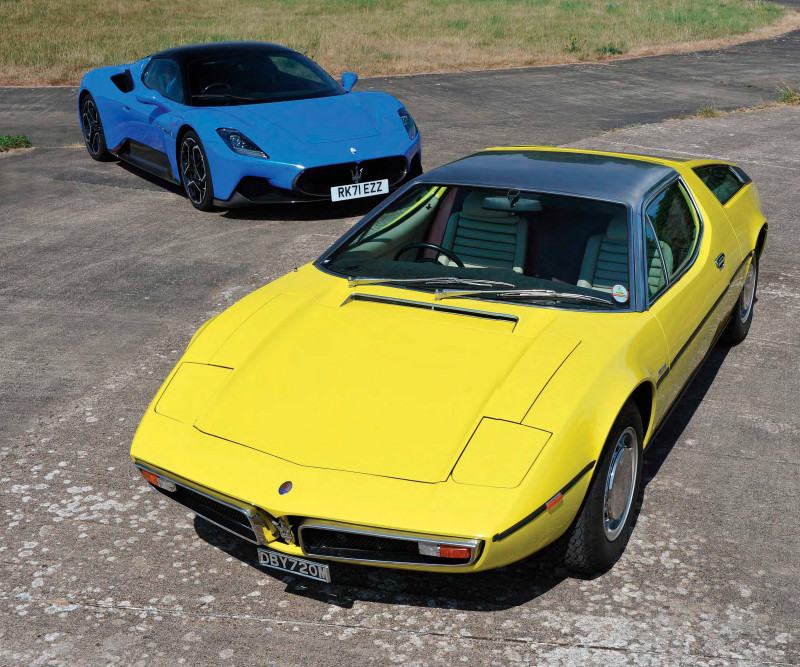 No qualms about either car’s styling, with a definite family feel to them, even though the MC20 is much longer, wider and taller. The Bora has stood the test of time incredibly well. Some have described Giugiaro’s masterpiece as the most beautiful Maserati of all, and I wouldn’t disagree: the uninterrupted ellipse of its silhouette; side windows tapering elegantly away; stainless steel roof and moon disc trims over Campagnolo alloys – all lovely. The MC20 echoes the Bora’s subtlety by relegating its sophisticated aero downforce package to the separate lower-body zone, leaving the upper body to form a fluid, organic sculpture.

The Bora had a difficult birth. Just as Enzo Ferrari balked at the idea of a mid-engined road car, so did Maserati. In fact, it was not until Citroën took the company over in 1968 that new French manager, Guy Malleret, persuaded Giulio Alfieri to create a midengined supercar using Maserati’s trusted V8.

“ With 310hp, the Bora builds speed nicely and is an effortless cruiser, although it doesn’t feel viscerally fast ”

Famously, Maserati’s long-standing test driver Guerino Bertocchi hated the notion, and his long-windedly critical approach delayed the car’s launch until 1971. But the Bora still stole a march on Ferrari in getting a V8-powered mid-engined car to market. Although quite advanced for Maserati – a steel monocoque, for instance, with independent rear suspension in place of cart springs – the Bora very much feels its 50 years compared to the MC20’s exotic conception of a carbonfibre chassis tub co-developed with Dallara. 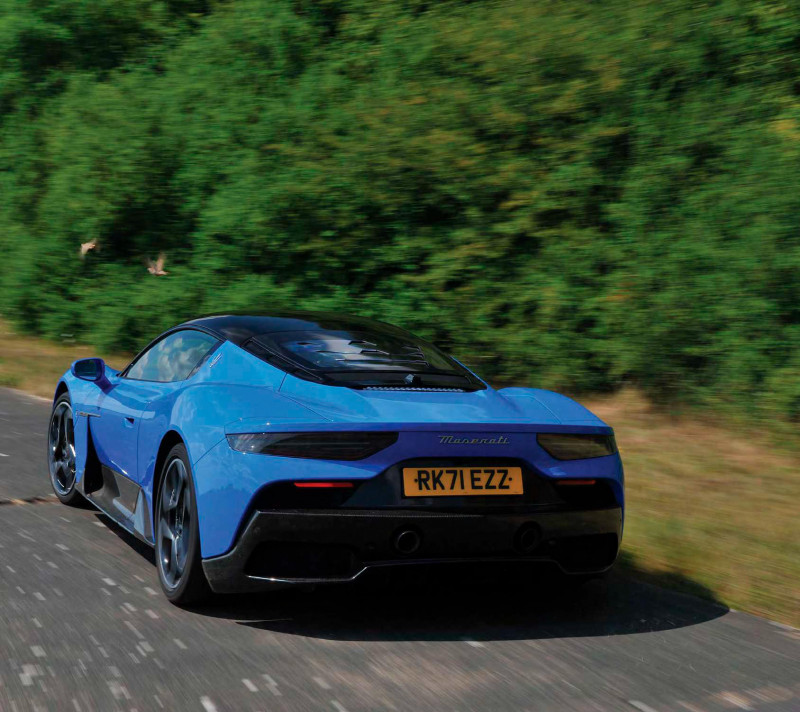 Getting in is not the hokey-cokey of contorted limbs enforced by most supercars. The MC20’s doors open up scissor-style (take care as they swing outwards slightly, as well as upwards) to reveal a surprisingly minimalist cabin. There’s very little switchgear here, the carbon dashboard banishing virtually everything to a 10-inch central touchscreen (shared with the Fiat 500 electric and a bit slow to respond). I note with pleasure that this right-hand drive model offers plenty of space for my left foot to rest, unlike the LHD MC20, whose wheel well intrudes massively.

The Bora’s cockpit is a masterclass of classical design, the multiple gauges angled towards the driver, switchgear readily to hand. The colour scheme is the personal choice of owner Matt Briffa, who is an architect by trade and understands colour. It’s certainly unusual: cream seats and a burgundy, cream and black dash. It feels utterly different to the MC20, except in one regard: the seats. There’s a definite link with the Bora’s oh-so-seventies ‘banana’ seats in the MC20’s curvaceous chairs, even if their black-and-blue ‘laser’ pattern channels ultra-modern sci-fi vibes. Oh, and offer far more lateral support than the Bora’s loungers (which, incidentally, are fixed – it’s the pedals that adjust). 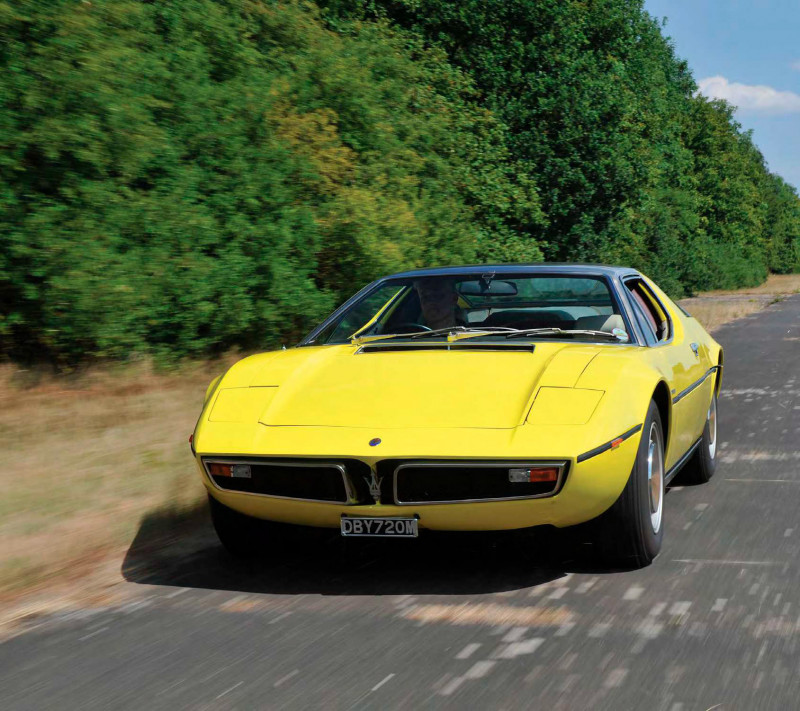 OK, time to fire the engines up, and to confirm that these cars are like chalk and cheese to drive – or should I say marble and parmesan? After some hesitation, the quadruple Weber 42DCNF carbs allow the Bora’s quad-cam V8 to settle into a smooth, burbling idle. Blip the throttle and a gruff thrum greets you. At low revs, the V8 is smooth and refined but at higher revs it really starts to scream. The 4.7-litre version in this 1973 example (it grew to 4.9 litres from 1975) has an abundance of torque. With 310hp, it builds speed nicely and is an effortless cruiser, although it doesn’t feel viscerally fast.

The MC20’s ‘Nettuno’ V6 may have only 3.0 litres, but with twin turbos it delivers fully 630hp and 730Nm of torque. With just 1470kg to haul, it’s properly quick: 202mph tops, 0-62mph in 2.9 seconds and 0-124mph in 8.8. But here’s the thing: it doesn’t feel fast. Pace is piled on with deceptive ease and in a surprisingly muted fashion. This is a source of disappointment for me: how has Maserati – the arch-sorcerer of sizzling sounds – conspired to deliver such a downright dull soundtrack?

The dual-clutch eight-speed transmission works brilliantly in all driving modes (Wet, GT, Sport, Corsa and ESC Off), especially Corsa with its rifle-sharp yet super-smooth changes. While the Bora’s ZF dog-leg five-speeder has well-chosen ratios – you can reach 100mph in third! – it’s compromised by a very long lever throw. But it’s effortless: owner Matt says of his recent 1500-mile continental trip: “It drives beautifully, sitting easily on the torque on the motorway. It’s great over long distances.”

Everyone says it but nothing prepares you for it: just how on/off the Bora’s brakes feel. That’s because paymaster Citroën insisted the car use its LHM hydraulics for the brakes (and indeed the clutch and adjustable pedal mechanism). The tiniest blip of foot pressure makes the car stand on its nose. You quickly learn to compensate by resting your foot lightly over the pedal before you need to brake, then squeeze down gently.

Otherwise, the biggest challenge of driving the Bora is its steering. Even with the engine in the back, there’s an awful lot of weight over the front end, and no power assistance to draw on, so at low speeds the heft required is bicep-building (easing greatly as your speed increases, though). Even with holes drilled in the sills and engine cover to save weight, the Bora’s a bulky thing at 1545kg. You do feel that heftiness around corners, with body roll, mild understeer and the potential for tail-out antics if you’re over-enthusiastic.

There’s a certain sensitivity to mid-corner bumps, but you feel the inherent balance in the chassis. The Michelin XWX tyres are narrow and high-profile (215/70 VR15) – good for ride but not necessarily grip. On early cars like this, significant airflow goes under the car, creating high-speed lift; Maserati introduced a grille in the front bonnet on later cars to counteract this.

The MC20 feels mighty impressive, seemingly whatever you do with it. Raw grip is astounding. You really have to try hard to induce oversteer but in Corsa mode, it’s possible to drift the car with an easy progressiveness. It even rides comfortably – almost as well as the high-profile-rubbered Bora – although it bottoms out on bumpy roads. That’s supercars for you. Boring though practicalities may be when talking about this sort of beast, these are supposedly ‘subtle supercars’ that can take on grand touring. Surprisingly, the Bora is superior in this regard. Firstly, it has almost twice the luggage capacity. Then there’s fuel range. The MC20’s 60-litre tank is meagre, especially if you’re pushing on hard and mpg drops to the low teens.

Visibility is excellent by supercar standards in both cars: you can actually see out of the side windows at angled junctions, unlike 99% of supercars, while the upright windscreens offer a great view out. But there’s a slight ointment-fly with the MC20’s rear-view mirror: since the Lexan rear screen offers no view out, Maserati has fitted an LCD camera which is tricky to focus on and behaves oddly in certain lights.

This pairing of Maseratis proves that supercars don’t have to be brazen and vulgar: there can be subtlety in sensationalism. There’s almost nothing to dislike about either of them. To look at, the MC20 is a bastion of restrained taste, while the Bora’s charms sing with crystal clarity 50 years on. As well as looking incredible, both cars feel lovely to sit in and offer very rewarding drives.

Yet their character is peculiar among supercars: each one feels unexpectedly relaxed, with a refinement and ease of driving that’s far removed from the extremes of mid-engined supercar rivals like the Ferrari Berlinetta Boxer of the 1970s, or the Ferrari F8 today. Both Maseratis are just so comfortable, with a great ride, easy cruising ability and a forgiving nature around bends. In short, all the glamour but none of the hardship. And all the good will, too, as both cars seem to bring out the best from bystanders. I guess that’s the true power of beauty.

Heavy low-speed steering and on/off brakes aside, the Bora is an effortlessly rewarding car to drive.

MC20 is properly quick in a straight line and superbly balanced through corners. The ideal daily supercar?