This innocent-looking Fiat Topolino hides a big secret. Under the skin, it’s a full-on 180hp hot rod with a real Jekyll/Hyde character.

Camped out by the start line at the Prescott Italia hillclimb a few months back, as the Ferrari 250 GT Breadvan and various other exotic beasts fire off, an innocuous-looking Fiat Topolino lines up. Surely this pre-war Fiat with its 569cc engine has to be the slowest car to go up the hill today? Then the lights go green and all eyebrows raise as the baby Fiat fairly shoots off the line and disappears under the bridge in a haze of burnt hydrocarbons. 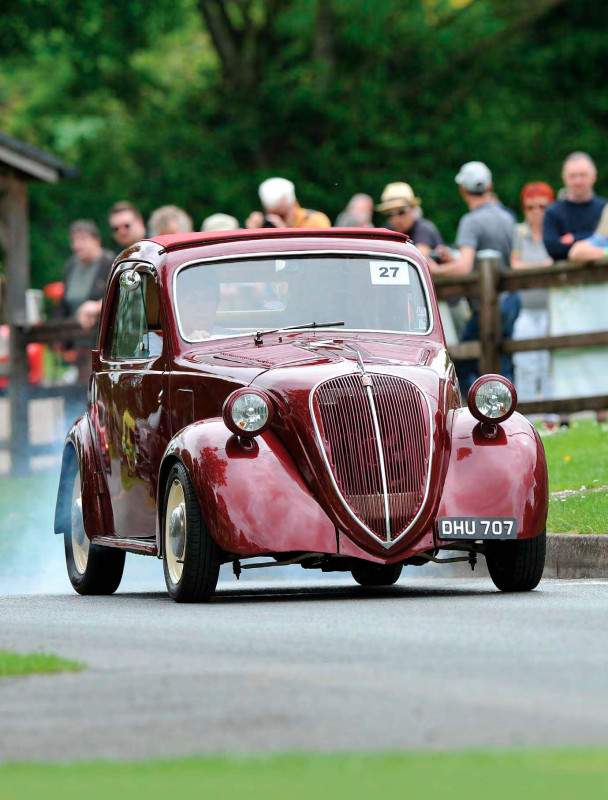 This is clearly no ordinary Topolino. In fact, it’s an absolute beast under the skin. It’s the work of an extraordinarily talented builder called Jacqui Kowalewsky who is a mechanical design and tooling expert by trade – for instance, she designs the robots that make today’s production cars. She is also an oldschool hot rodder, which begins to explain why this baby Fiat has some very grown-up manners. “I used to be a drag racer,” says Jacqui, “and I remember seeing lots of Topolinos on the drag strip, usually with replica glassfibre bodyshells. I was always a fan of the Topolino’s shape but once I saw what they are supposed to look like, I fell in love with it. In 2014, I found a very early 1937 example that was originally built in Lingotto within the first nine months of production starting. Sadly it was in a terrible state because it had been kept in a garage with the door left open. It was complete but it was in pieces. I bought it with the idea of turning it into a discreet hot rod, keeping the shape as close as possible to standard.” Despite doing pretty much all her work these days on a computer, the skills that Jacqui learnt as an apprentice stood her in good stead when it came to restoring the bodywork. It’s remarkable that this was the very first time she’d ever tackled a steel body (she has built several glassfibre-bodied hot rods over the years).

Amazingly, it’s still possible to buy some reproduction Topolino body parts – like sills and floors – but most of the damaged bodywork had to be fabricated by Jacqui, including the inner wheelarches, front three-quarter panelling, inner A-pillars and vents. The doors had to be welded in place to maintain the integrity of the shell while the sills and so on were repaired. Even the underbody louvres were pressed out by Jacqui herself. One modification was a cut in the scuttle panel to make the whole front bodywork above the engine removable for easier access. Jacqui has also fabricated an alternative-style ‘waterfall grille’ front end but she prefers the original style. Pretty much the only thing Jacqui didn’t do in the whole build was shotblast the wheels.

The chassis was painted the same colour as the body, namely Nouveau Red, a 1990s Ford colour. Using clear over a base coat really makes it gleam in sunlight. The wheels and engine bay were painted in contrasting Ivory. The repair process took fully 18 months. Only then could the process of hot rodding the Fiat begin – which took another 18 months. An engine upgrade was top of the list. While Jacqui would have loved to use a Fiat twin cam, they are very expensive these days. Instead, she chose a 2.0-litre twin cam from a 20-year old Ford Focus. It retains its standard valves and cams but has a ported head, higher compression ratio, uprated conrod bolts, motorcycle carbs and lightened flywheel, and is running about 180hp.

The Quaife-manufactured four-speed manual gearbox is basically Ford 2000E. It’s Quaife’s close-ratio dog ’box version, chosen because the ultra-close-ratio alternative would have been unsuitable for drag racing (first gear is too high). Jacqui has employed a vintage trick by lubricating the engine with castor oil. The gear lever looks authentic but it’s actually a Ford Anglia item with a Fiat knob. Likewise, the handbrake looks convincing even though it’s from an MG Midget.

At first glance, the lowered stance is one of very few things to mark out Jacqui’s Topolino as non-standard. The original car’s 15-inch wheels were made of solid steel and very thin – great-looking but far from ideal for the extra power and performance of this car. Jacqui searched for more robust wheels that resembled the originals and settled on Triumph Spitfire 13-inch fronts and Morris Minor 14-inch rears, suitably modified to accept the original Fiat hubcaps.

As for the suspension, that’s essentially 100% homemade. The hubs are Triumph Spitfire up front and Mazda MX-5 at the rear, the Mazda also donating its limited-slip differential. Everything else is Jacqui’s own design from scratch. The independent front end uses an A-arm, lower and upper wishbone and coil-over dampers, with the bigger engine dictating two towers to support the A-arm. The rear end consists of a caged ‘module’ welded into the chassis, with a removable rear casing in case Jacqui ever needs to drop the diff out. The fuel tank was originally front-mounted but it’s now relocated to the rear. The question of where to put the fuel filler vexed Jacqui initially, as she didn’t want to cut the bodywork if possible. In the end, an ingenious solution was found: the centre of the spare wheel cover flips up to reveal the filler tube.

The interior has quite a few changes over the original Fiat, without looking over-the-top in any way. Some alterations were forced by the new engine installation, which is considerably longer and wider than the 569cc in-line four of the original Fiat. The bigger central tunnel resulted in a loss of some four inches of cabin length. It also forced Jacqui to move the pedals to the right, as well as the original steering column, resulting in the Fiat Bakelite steering wheel nudging the door. Jacqui simply couldn’t find a replacement in the style she wanted so she built her own ‘banjo’ spoked wheel from scratch, keeping the centre moulding from the Fiat with its horn button.

“The seats were pretty much shot, with rusted-out springs,” recalls Jacqui. “It’s possible to buy reproduction seats but they aren’t cheap. The seat backs were solid enough to be restored, though, so I made new marine-ply bases and foam, while I used the original covers as patterns to make new ones in vinyl. I’d never done any sewing before and had to buy a sewing machine especially, educating myself on YouTube.”

The convertible roof frame was intact with the remains of the canvas still present. Jacqui used this as a pattern to make a new roof out of triple-layer Mohair, colour-matched to the bodywork. “It felt very dark, though,” she recalls, “so I added an extra layer of cream-coloured vinyl inside to brighten things up. The car leaks like a sieve, but not through the roof – water comes in around the pedals and doors, while the bonnet vents allow water to collect in the twin cam head covers. And because there’s no heater, the windows do steam up quite badly.”

The headlights are original, restored using new lenses. Originally, the Topolino had just one rear light – cost-cutting was pretty extreme back then! – but Jacqui has extravagantly opted for two. They’re non-original but look great: 1939 Ford teardrop units that are much favoured in hot rodding circles. The bonnet ornament, meanwhile, is Jacqui’s own version of Fiat’s. The project was finally finished in August 2017 after a three-year build. It’s been nicknamed ‘Shortcake’ by Jacqui’s daughter. Is that because it’s short and sweet, we ask? “No,” replies Jacqui, “it’s the red-and-cream colour scheme which reminds her of a strawberry cheesecake!” And how about usage? “I drive the car all year round, going to meets and events,” says Jacqui. “I do use it in winter, provided it’s dry and there’s no salt on the roads. It’s pretty sketchy in the wet!”

So how does it drive? As we head off, I’m immediately struck by how stiff the suspension is, crashing over the slightest bump. That’s because the engine sits very low, with a notably low-hanging exhaust (it exits under the sill because there’s no room for it to be routed to the back), so the stiff set-up is needed to avoid bottoming out.

As soon as we’re on the open road, a hearty dab of throttle reveals this baby Fiat to be an absolute beast. It weighs around 750kg, which is truly featherweight by modern standards but actually about 50kg heavier than the standard Topolino. The power-to-weight ratio is around 240hp per ton, so the car’s exceptional pace shouldn’t be too surprising – but it certainly surprises other road users. The Topolino has no problem keeping up with modern traffic and can happily see off a large proportion of new cars. It sounds great, too, with an urgent twin cam revviness.

It hugs the road with a darty, pointy feel from the front end. But if you’re injudicious with the loud pedal, oversteer awaits in large measure. The short wheelbase certainly gives it a feisty feel – readiness to apply opposite lock is definitely required! Jacqui reports being very pleasantly surprised by her Prescott hillclimb experience: “It was great fun!”

With a drag racing background, it’s only natural that Jacqui should give the little Fiat a go up the strip. So far she’s only dragged the Topolino once, at the Hot Rod Drags at Santa Pod in September last year. There she achieved a quarter-mile time of 14.39 seconds with a terminal speed of 94mph. That’s very impressive by any standard, and the NSRA (National Street Rod Association) understandably rewarded Jacqui with a ‘Dirty Dozen’ trophy.

Restoration pics give clue of shocking state as found. Wheelspin and oversteer readily available on request. Lowered stance is virtually the only clue to this car’s radical underpinnings. Hot rod techniques abound. Interior is remodelled around much bigger engine – a 2.0-litre twin cam lump with no less than 180hp.