All-wheel-drive technology has defined the Audi brand for more than four decades, so it’s a moment to savour when the latest model to wear the famed quattro badge meets its formidable forebear.

As a motoring enthusiast, what’s your go-to on-screen car moment? While a timely revisit to the car chase scenes in Ronin nears the top of my list, I have been known to skirt a deadline, typing the name “Walter Röhrl” into my YouTube search bar. Questionable accompanying soundtrack aside, the video that tops the search list reveals one of the greatest racing drivers of all time manhandling his Group B Audi Sport Quattro S1 through a timed rally stage. Despite a parting sea of supporters playing a deadly game of dare, trying to touch the car as it powered past, the footage regularly cuts to the German driver’s blue Adidas driving shoes as his feet perform a delicate dance across all three pedals. This sequence of left-foot braking and simultaneous command of the throttle to ensure the car’s turbocharged engine remained within its optimal power band through regular frantic manual gearshifts remains one of the most spectacular pieces of driving ever filmed. 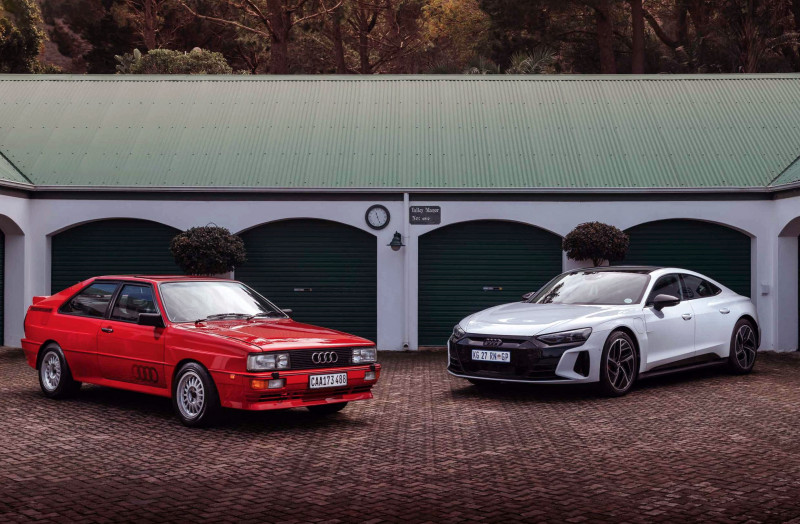 Röhrl joined the Audi Sport team in 1984, four years after this Ingolstadt-based manufacturer had rewritten the rule book of what was possible in its racing cars and the road-going models on which these were based.

At a shared Volkswagen Group testing facility in Scandinavia in 1977, Audi engineers noted the impressive levels of all-weather traction achieved by a VW Iltis military vehicle. Quickly realising the potential of the unit’s all-wheel-drive system, they fitted it to a turbocharged inline five- cylinder Audi 80 sedan. Unveiled at the 1980 Geneva Motor Show, the Audi Ur-Quattro would herald a new era of performance possibilities for both its maker and the broader automotive landscape. Forty years later, by 2020, the brand had not only sold more than 11 million vehicles fitted with quattro technology, but had evolved this surefooted system to feature in several of its all-electric e-tron products.

While the sight of a flame-spitting, airborne white-and-yellow Audi Quattro rally car would eventually epitomise Group B’s take no- prisoners notoriety, the road-going cars built by each competing manufacturer for purposes of homologation would inevitably benefit from this spectacle. Of the 11 452 units built between 1980 and 1991, it is difficult to imagine many can still be in the same neat condition as the Tornado Red 1986 Audi Quattro currently residing in a leafy Western Cape suburb.

With its WR model designation, this example features several small cosmetic and interior upgrades handed to the range ahead of a significant update in 1987.These include single-piece headlamp units that replaced the original car’s dual-split items, as well as a futuristic-looking digital instrument readout to replace the analogue cluster introduced in the Geneva show car.

This car features a longitudinally mounted turbocharged 2,1-litre, inline five-cylinder engine with 10 valves (a 20-valve version was introduced in 1989).Via a five-speed manual transmission, 147 kW and 285 N.m of torque is distributed to all four wheels using a Torsen type differential. Led by engineer Walter Treser and overseen by former VW Group boss, the late Ferdinand Piëch, this ground-breaking permanent all-wheel-drive system introduced a hollow shaft to drive the centre differential (and rear wheels) from the back of the gearbox, while also accommodating an output shaft to simultaneously send 50% of available torque to the front wheels. As demonstrated on rally stages across the world, the success of this streamlined packaging was that drivers could access the full potential of a turbocharged powertrain, with the assurance of optimal traction regardless of the prevailing road surface conditions.

With Herr Röhrl’s handy footwork and a previous drive of a “widowmaker” Porsche 930 Turbo in mind, I’d expected driving an original Audi Quattro to be a similar exercise in turbo management, watching the rev counter in anticipation of an unceremonious dump of force-fed performance. Yet, unlike its more powerful and particularly unwieldy rally-car progenitor, a steady evolution of the turbocharging technology featured in the roadgoing version revealed an impressively linear power delivery throughout the rev range. From a driver’s seat that could easily have been lifted from the Mk2 Golf GTI parts bin (much of the interior is sourced from VW), the original Quattro’s suspension setup is remarkably forgiving for a car designed for time-trial runs. Leaning into a tight corner, I realised why they called for an adjusted approach to being driven hard, despite these road-focused cars weighing less than 1 200 kg. Not unlike the newer-generation combustion-engine quattro models, the reward lies in a slow-in, slingshot-out approach. A benefit of being able to left-foot brake is it enables you to manage any potential turn-in understeer while still feathering the throttle.

As with the latest iterations of the TT RS, RS3 and RS Q3, it’s the distinct thrum associated with the brand’s legendary turbocharged inline five-cylinder engine that crowns the respective characters of these special quattro family members.

As Audi moves towards a prescribed all-electric future, the brand’s famous all-wheel-drive technology has realised its most significant evolutionary step to date. No longer mechanically linked, the front and rear axles of the brand’s new e-tron range work in harmony via a digitised understanding between two electric motors, their performance dictated by a battery pack. Despite the low-slung e-tron GT quattro carrying over 1 000 kg more than the original ’86 model coupé, the newer car will sprint from standstill to 100 km/h three seconds faster than its forebear … and this with an even faster RS version waiting in the wings.

A further advantage gained by the future-focused version of quattro technology is the ability to not only adjust the amount of torque distributed to an individual wheel in an instant, but also to retard the flow of energy to a specific corner of the car to aid mid-corner traction. The ferocious accompanying exhaust note and iconic turbo flutter from the original Audi Sport Quattro racing cars – including the versions that dominated on South African circuits and stage events – will remain a large part of what made these cars (and their drivers) so special. However, what price would each of these teams have paid for the kind of instant throttle response and unrelenting performance gained by electric assistance?

Going forward, this would make quite the two-car garage, would it not?

02 This updated Ur-Quattro featured single-piece headlamps. 03 An auto ‘box was trialled in the racecar, but the road car always featured a five-speed manual transmission. 04 The driver can manually lock the differential.

06… including the Golf GTI-inspired front seats.

03 The e-tron features a charging point on either side of the car.

By 1985, Audi had evolved its Sport Quattro rally cars to include a steeper raked windscreen for reduced glare into the cabin, significantly updated aero and a 320 mm shorter wheelbase to make the car that much more agile and fearsome-looking. The brand would also use some examples of this car to hone early versions of its now-common DSG dual-clutch transmission. Walter Röhrl powered his 368 kW Sport Quattro S1 E2 to its final WRC victory at the ’85 San Remo rally.