One innovative Austrian inventor fancied an alternative to the ski-lift. The VW Half-Track Fox was his solution, and it’s just been restored.

Has there ever been a more universally adored – not to mention more versatile – van than the Volkswagen Type 2? The ‘split-screen’ bus isn’t just an automotive icon, but also a seriously important piece of cultural history. Its legacy remains powerful to this day, keeping the Volkswagen scene both vibrant and huge. Having said that, we’ve never seen one quite as versatile as this before. 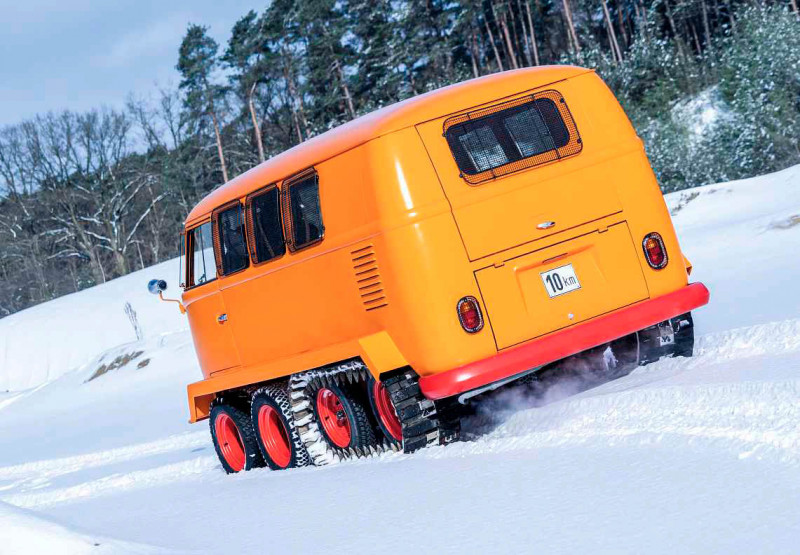 Say hello to the Half-Track Fox, described as ‘probably the most off-road-capable Bulli ever to be seen on the mountain slopes of this world’. Fresh from an extensive restoration, it currently resides in Volkswagen Commercial’s Hanover heritage collection and its restoration has been a labour of love for the team. 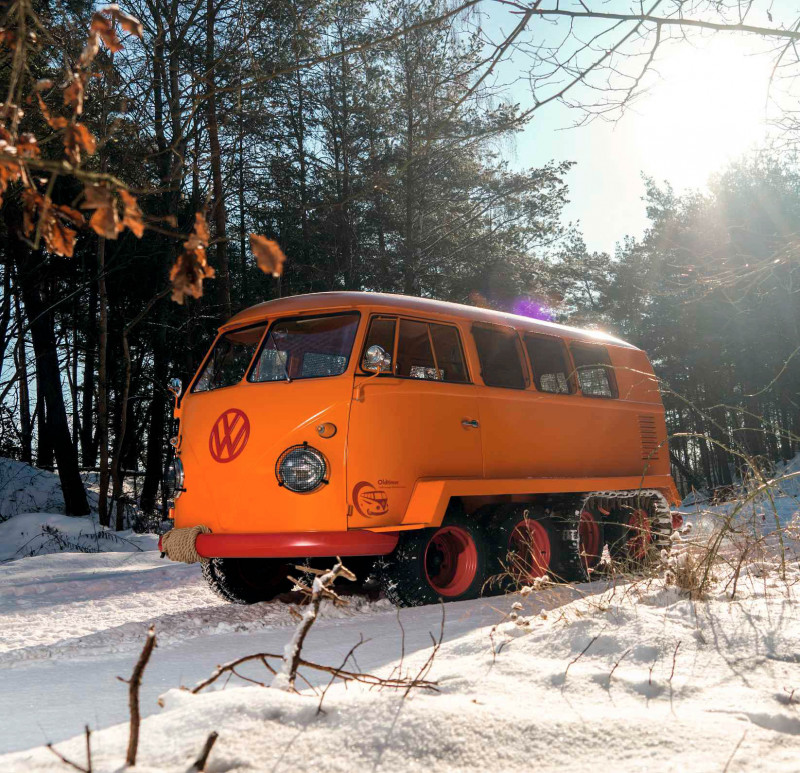 Versatility was among the Type 2’s major selling points when Volkswagen launched the new model – based on the underpinnings of the Beetle, or Type 1 – in 1950. The original inspiration for the Type 2 van is credited to the Dutch Volkswagen importer, Ben Pon Sr. It was during a visit to the factory to discuss importing the Type 1 into The Netherlands that he spotted a Plattenwagen (a custom-built factory parts transporter) running around, which used the Beetle’s running gear. 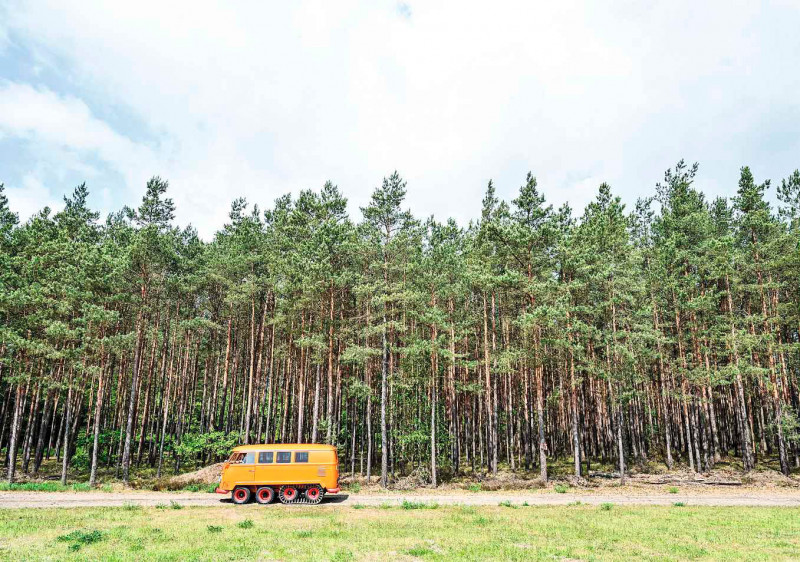 The original sketch for the Type 2 – or ‘Bulli’, as it is nicknamed in Germany – featured revolutionary cab-forward styling and the rear-mounted flat-four-engine, making a side-opening door the best option. It could transport cargo or people, or be used as a camper van. One of the few things it didn’t boast from the factory, however, was the ability to drive up a snow-capped mountain. This was a problem that Vienna-based inventor, engineer and keen skier Kurt Kretzner set out to rectify. 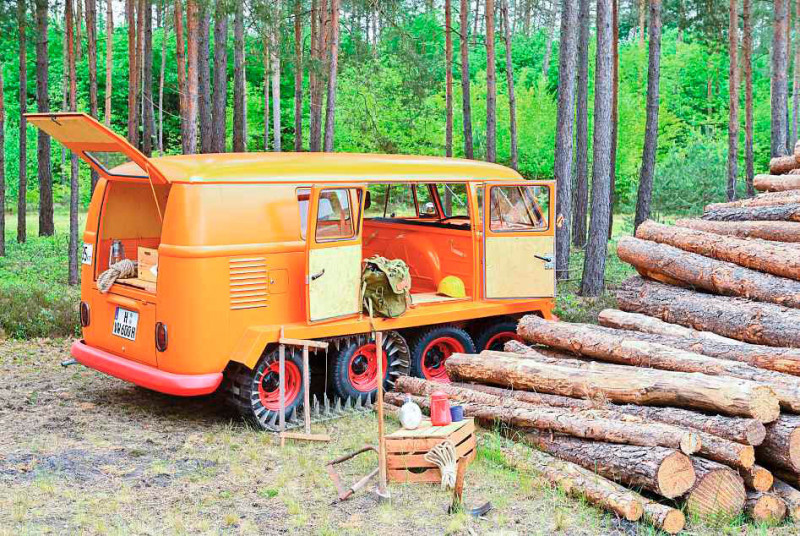 Kretzner’s problem was that there were very few readily available off-road vans for sale in Austria. He wrote in the original sales literature for the Half-Track Fox: ‘At first, I had a look around, but couldn’t find the vehicle I was dreaming of. So I decided to build it myself.’ Specialist machinery did exist but it wasn’t easy to operate, so this resourceful engineer built his own. It had to be easy to drive, just like a normal van – yet this one came with a twist.

His original brief was that he wanted ‘an ideal helper for everyone: mountain hut keepers, hunters, foresters, doctors, maintenance engineers for ski-lifts, TV and radio masts, pipelines and the like’. What better starting point than the much-loved Volkswagen Bulli? This particular example began life as a standard Type 2, built at the Hanover plant in 1962 and delivered to its new owner in Vienna. It spent the first few months being used as a road van before Kretzner began his conversion. 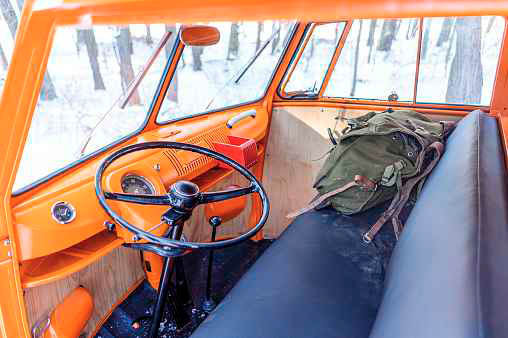 Over the next four years it was completely transformed by the inventor into what you see here. Gone are the rear wheels, and in their place is a chain-driven double axle. The outer tracks are driven by internal 13-inch wheels, and were designed, developed and built by Kretzner. His unique track design features aluminium links fitted with 2cm rubber feet designed to make the Type 2 drivable on the road without damaging asphalt.

Kretzner had denied himself a fully tracked vehicle, like a bulldozer, because it would have been difficult to drive. Their unconventional steering demands a different set of driving skills, which would detract from the Fox’s planned ease of use, so Kretzner kept his van’s standard set-up at the front. Obviously it had to be modified in order to keep ahead of the huge traction of the rear tracks, so a second steering axle was fitted behind the original. Both feature dual 14-inch wheels with all-terrain tyres. 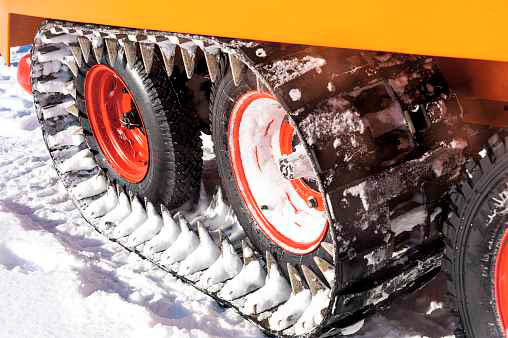 Each axle had its own set of brakes, too, but the biggest advantage of the new set-up was the 10m turning circle. To fit all this hardware under the Type 2, the lower portion of the body was significantly modified, with new full-length fenders to cover the tracks and which drastically altered the Bulli’s looks. The changes to the body also meant a reduction in interior space, leaving just enough room for some bench seating.

Due to the changes in the rear axle, the gearing was significantly lower than a standard Type 2’s, but the biggest change came in the form of a limited-slip differential – vital for maximum off-road ability. Despite all the extra hardware, the engine remained entirely untouched, meaning the Fox had to make do with the Type 2’s unmodified air-cooled 1.2-litre, 34bhp flat-four.

Ultimately, though, this would prove to be sufficient given the Fox’s road-legal maximum speed of just 35km/h. What’s it like to drive? Christian Schlüter, product manager at VW’s commercial vehicle division (and a die-hard Bulli enthusiast), drove the Fox after its restoration. ‘There’s a rattle and hiss as the sound of the chain-drive combines with the familiar sound of the boxer engine. At low speeds, the rubber blocks of the tracks are strongly perceptible, and the road-legal maximum speed of 35 km/h is to be approached only by the daring! First gear is a very short ratio, therefore in everyday driving you can start in second. Otherwise, everything inside feels like a VW bus and can be operated in the same way. It shows its true qualities off-road and on snow, where it can also be driven more swiftly than on the road. The track links bite into the ground and the front tyres can be equipped with metal spikes.’ 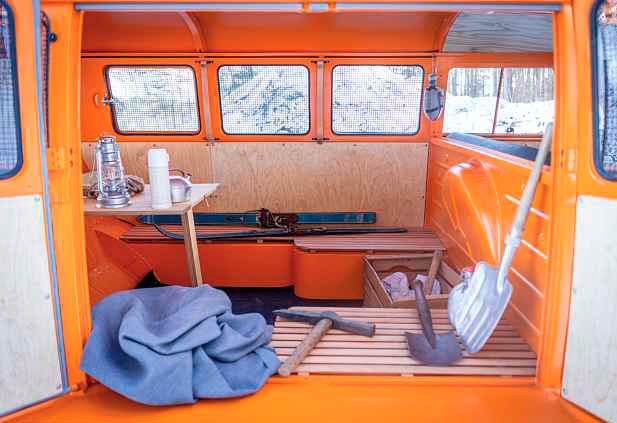 The Half-Track Fox looks like a VW Type 2 on steroids. It backs up those looks with genuine off-road capability, and is as easy to drive as you could expect of a van converted in such a specific way. Surely Kretzner was onto a winner? His advertising certainly suggested that should be the case: ‘The new, ideal, easy-to- drive Half-Track Fox that lets you safely and comfortably master all difficult terrain. Snow, sand, stony ground, mountain meadows, small streams and woods can all be driven through in this vehicle.’

Yet Kretzner built only two Foxes before moving on to other projects in 1968 – and this one is believed to be the sole survivor. It was Kretzner’s personal vehicle, and was apparently a regular sight around Vienna until the mid- 1980s. It became a bit of a local legend, and was purchased by the Porsche Automuseum in Gmünd in the late 1980s. It then found its way into the possession of a Frankfurt VW Bus collector in the early 1990s, who in 1994 passed it into the stewardship of the German Type 2 club Bullikartei eV.

Although it was still running and driving at the end of the 1990s, the Fox was soon decommissioned, and Bullikartei began the process of restoring it in 2005. It was disassembled, but the club struggled to make progress as most of its members are spread throughout Germany. It remained in pieces until it was acquired by VW Commercial Vehicles’ own classic vehicles department in Hanover in 2018.

The process of restoring the Fox to its former glory began in haste. Schlüter notes: ‘The vehicle was completely disassembled and the body showed some maintenance issues. The reassembly was based on drawings and pictures.’ The team was passionate about getting the Half-Track Fox back up and running, being guided by the principle of ‘Erinnern. Erleben. Erhalten’ (‘Remember. Experience. Receive’).

As with all restorations carried out at VW’s Hanover factory, the body was completely stripped and all the necessary metalwork repairs carried out before it was protected with a cathodic dip. And then, just as it was in 1966, the body was finished in matt orange paint – chosen by Kretzner to make his special vehicle instantly recognisable in the Austrian countryside, and also the reason for its name.

The Fox’s track links were made by Kurt Kretzner, so they are unique and irreplaceable, and the tyre sizes required intensive research, yet most of the other components – even on the dual front axle – were standard to the Type 2, which made their restoration much more straightforward.

Although originality was important, there were very few details, photos or even drawings of the interior as it would have been back in 1966. The team created a brand new and unique rear cabin for the Fox, making use of beech and pine for this Alpine explorer. Not just pretty, but practical as well, with plentiful storage for tools or skiing equipment.

After more than 25 years of sitting still, the Fox finally stretched its legs in the mountains for the first time during the ski season in early 2022. ‘The vehicle was a popular project within our small team of mechanics because of its exclusivity. A lot of ideas, work and passion went into it,’ says Schlüter.

The Fox will remain in the VWCV heritage collection and is set to star in next year’s VW Bus Festival, a three-day extravaganza held in Hanover. Fancy being among the 100,000 Bulli fans who’ll be there to see it? Find out more at vw-bus-festival-2023.de.

Left and below In its element in the forest; restoration work was carried out by VW’s own commercial vehicle heritage department in Hanover. Right There’s no record of the Half-Track Fox’s original rear cabin, so VWCV created wooden benches and storage.

Clockwise, from top left Half-Track is limited to 35km/h on the road; front cockpit is standard Bulli; traction on snow is provided by specially made wheel-driven tracks; there’s no stopping it.