The new open-top 296 GTS F171 aims to deliver the same sensational driving sharpness as its fixed-roof GTB sister – but how well does it actually perform?

Bang! Jeepers. Has something exploded on my 296 GTS? Blitzing along a section of autostrada near Bologna, a quick check of the gauges reveals nothing untoward. Then, glancing in my mirror, I witness the remains of an exploded truck tyre unravelling in the carriageway behind. Phew, so it’s nothing to do with my Ferrari. Well, this is not how I expected to get my heart pounding in the new open-roof 296 – nor how I’d experience the promised “new dimensions of sound” the GTS offers. 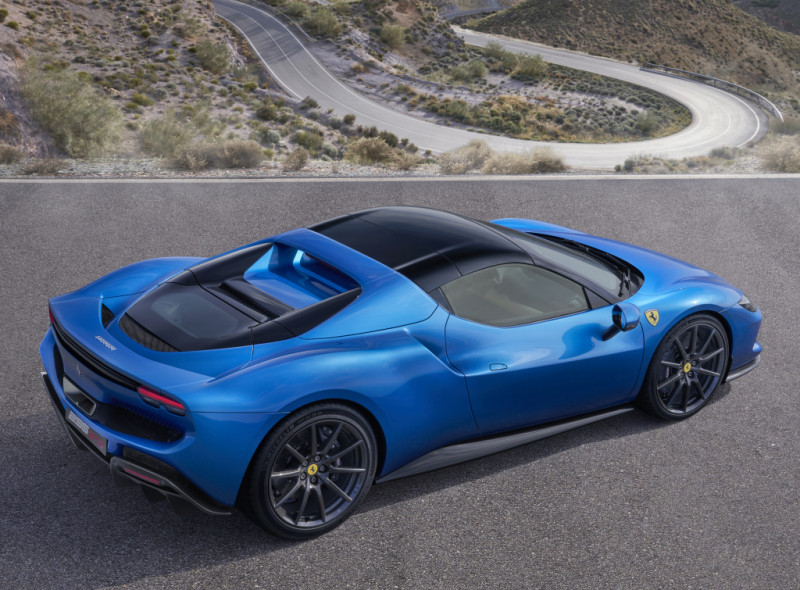 Shock mellowing to relief, as a tunnel approaches on the autostrada I get a sudden frisson of elation. As we all know, the ‘tunnel test’ is the definitive way of establishing how good a car’s soundtrack is. Roof down, tunnel empty of traffic, I rifle down the gears using the paddles nestling behind the steering wheel. Blap – each downchange engages with ferocious certainty. Reading 4000rpm on the clock, I hammer the accelerator hard. What starts as a growl quickly turns into a searing scream as the digital rev counter rotates to its peak of 8500rpm. Yes! The tunnel test is a five-star pass. 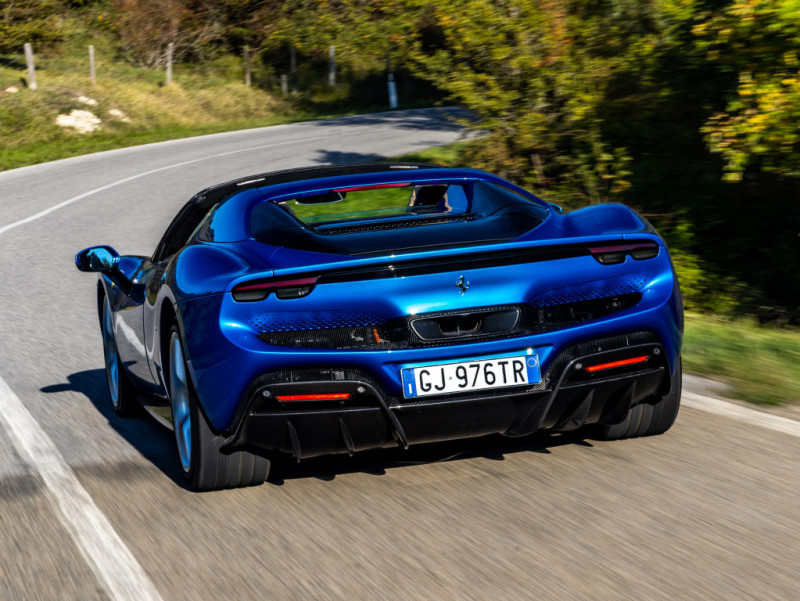 The GTS has a different hot tube system and a more intense sound, the exhaust fizzing away like popcorn in a pan 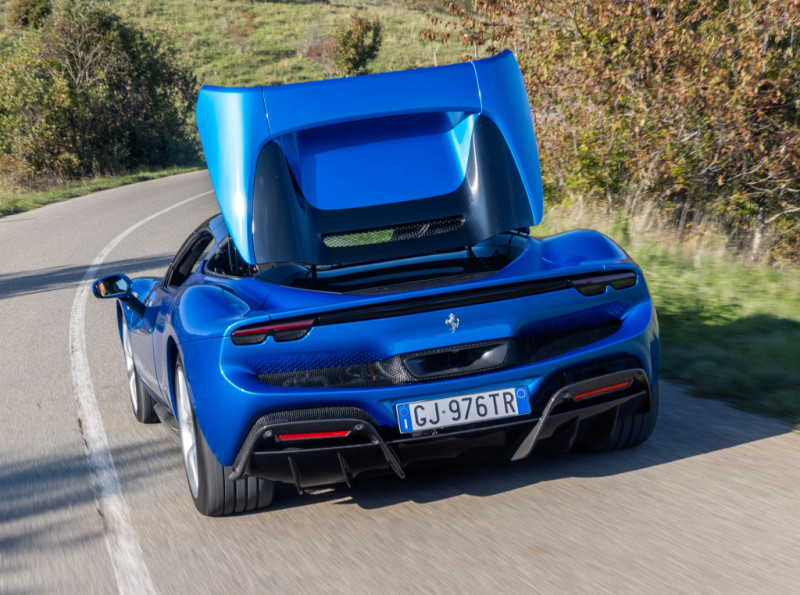 More relief. You see, one of the main reasons to buy the new 2023 Ferrari 296 GTS F171– the open-roof sister model to the 296 GTB coupe – is the greater intimacy you feel with the engine. And Ferrari has changed quite a lot in that department in creating the GTS. The area where the retractable hard top stows is exactly where the (wonderfully named) ‘hot tube resonator’ lives in the GTB. This stethoscope-like system pipes the engine’s raw, analogue sound straight to the cabin. The GTS has different hot tube pipery and larger openings to increase the intensity of the sound. Top up, it’s every bit as engaging as the GTB, while top down, you can hear the single-exit exhaust much more clearly. And what a noise it pumps out! The V6’s engine’s slender 120-degree angle between banks allows the twin IHI turbos to sit within the vee, giving a very short, straight exit to the exhaust tailpipe. When you throttle off, it fizzes away like popcorn in a pan, but never feels too lairy. 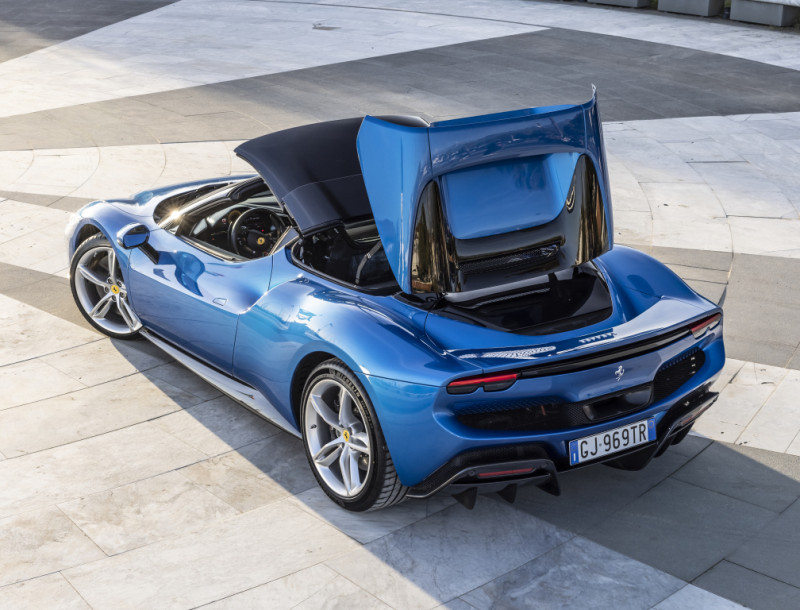 The auditory element of my test drive had started so differently. The default mode on start-up is ‘H’ (Hybrid), which means you set off using electricity alone, and therefore in complete silence. Not that the 296 GTS feels sluggish as an EV – it’ll reach a peak of 84mph and accelerate nimbly thanks to 167hp of battery power – but your thumb will be twitching to change the steering wheel’s eManettino button to ‘Performance’ mode and get that wonderful V6 singing along. No road car engine in the world has a higher specific power output than Ferrari’s 3.0-litre V6 (221hp per litre). Despite this, it never feels peaky in the way it delivers its power. The combination of two turbos and one electric motor completely fill in any torque gaps, with zero lag. It’s like supercharged treacle, effortless at low engine speeds, yet wonderfully scintillating further up the rev band. Oh, and incredibly quick. You have to switch to ‘Qualify’ mode to squeeze every ounce of the powertrain’s 830hp headline figure, but when you do, the acceleration is phenomenal. How about 0-62mph in 2.9 seconds (same as the GTB) and 0-124 in 7.6 (a mere 0.3sec slower)? 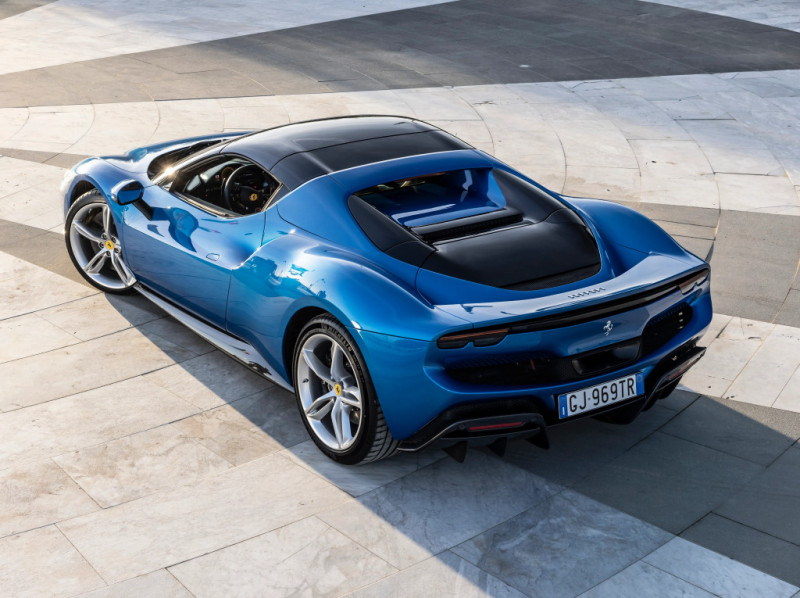 The gearbox is an eight-speed dual-clutch automated unit with shifts that are, claims Ferrari, faster than anything else on the market. I have no reason to doubt that. While the classic-look gearshift gate offers you a fully automated option, I had much more fun switching to manual mode and using the paddle shifters instead. 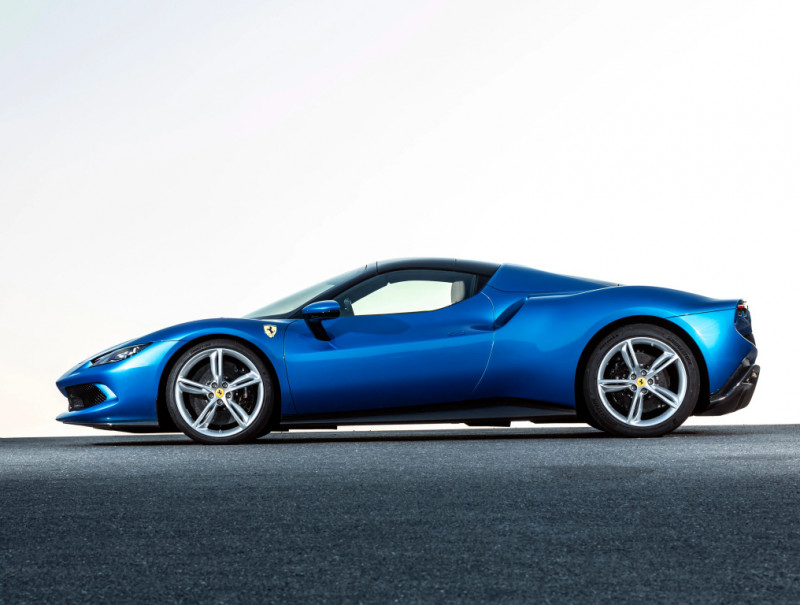 With the roof up, the GTS’s silhouette looks very similar to the 296 GTB’s, complete with its flying buttresses that reference the 1963 250 LM (except that Ferrari never made an open-roof 250 LM, of course). The profile of the wings and roof produce the same aerodynamic performance and cooling efficiency as the 296 GTB, while the active aero rear spoiler is retained unchanged. Only the ‘flying bridge’ behind the passengers is significantly different. 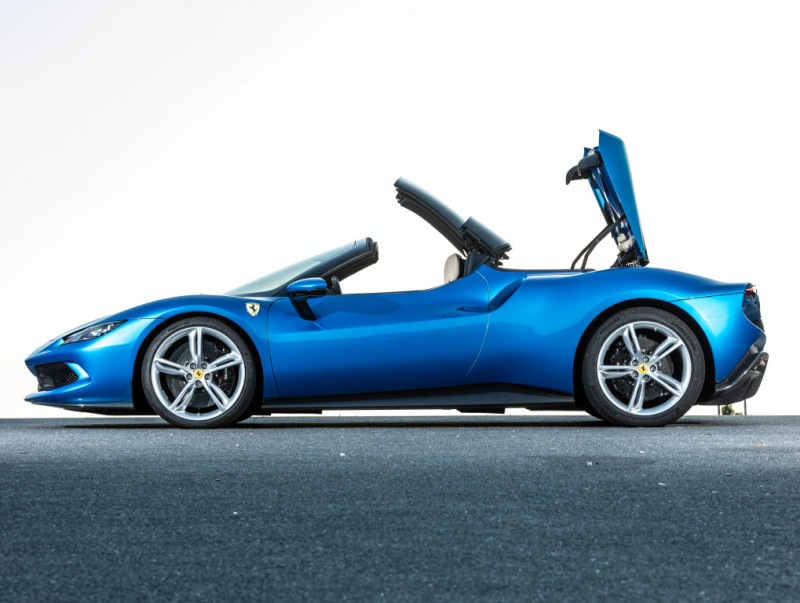 Folding the two-piece aluminium roof takes 14 seconds, which you can do at any speed up to 27mph. It stows neatly above the front half of the engine (there’s a neat smoked glass window behind that lets you see the V6, by the way). Top down, it feels like a proper open-roof experience: much better than a ‘targa’ top, with full wind-in-the-hair fun. There are a lot of aero mods – new trims, new headrests, modified windscreen – that combine to keep buffeting down (unless you open the side windows, that is, when it gets very blustery). Overall, it’s a very refined experience and I was perfectly happy to travel virtually the whole of my 90-mile test drive from Maranello to Forte dei Marmi near Pisa with the roof down. The cabin is every bit as comfortable as the GTB’s, with the same generous space and excellent seats. By the way, you probably don’t need the optional ‘air scarf’ that blows hot air around your neck – it’s just fine without. 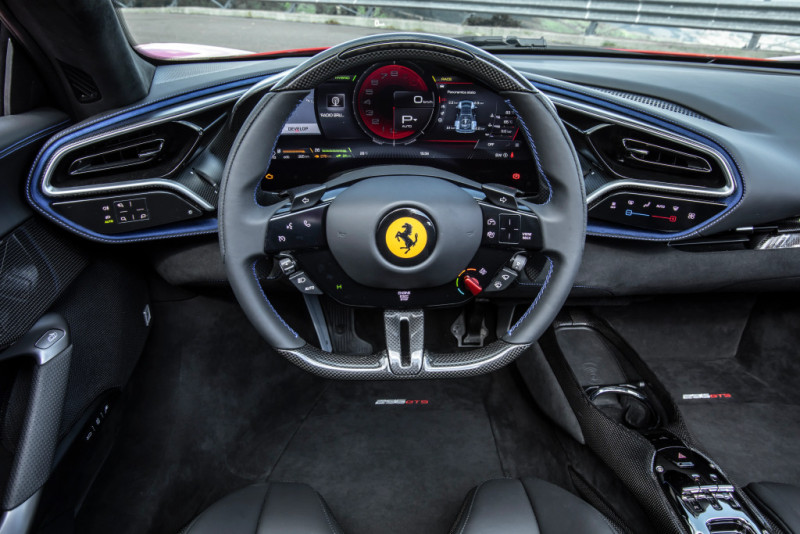 One word on the glass rear screen behind you. Unlike the fixed pane in the GTB, the GTS’s screen can be raised and lowered via a button. It may be tiny but its position makes a huge difference to the experience. Not only does lowering it maximise auditory thrills, it also – weirdly – minimises buffeting. Another downside of having it raised is worse visibility, since the demisting element is so obtrusive. 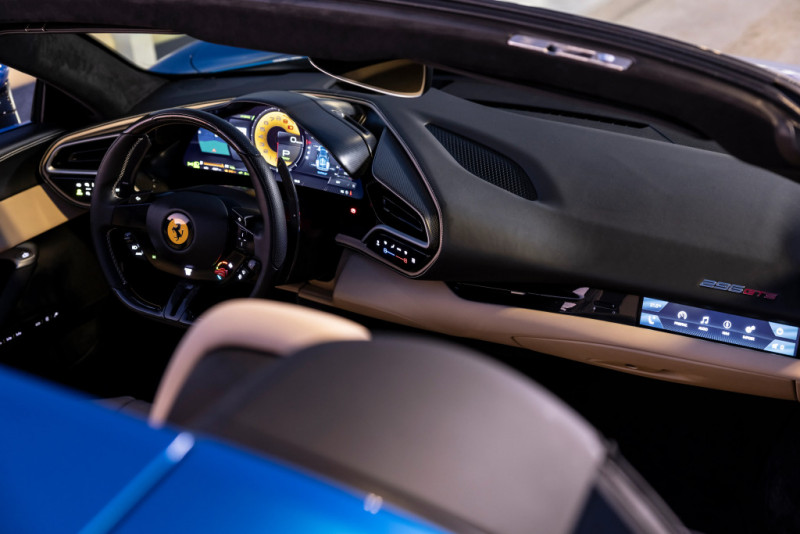 Many convertibles suffer in terms of rigidity, and the 296 GTS is no exception, despite the chassis being heavily reinforced in the sills and A- and B-pillars. Once you fold the roof down, the difference is discernible in some scuttle shake, but rigidity is much better than it was in the old F8 Spider. The roof mechanism adds about 70kg to overall weight, by the way. 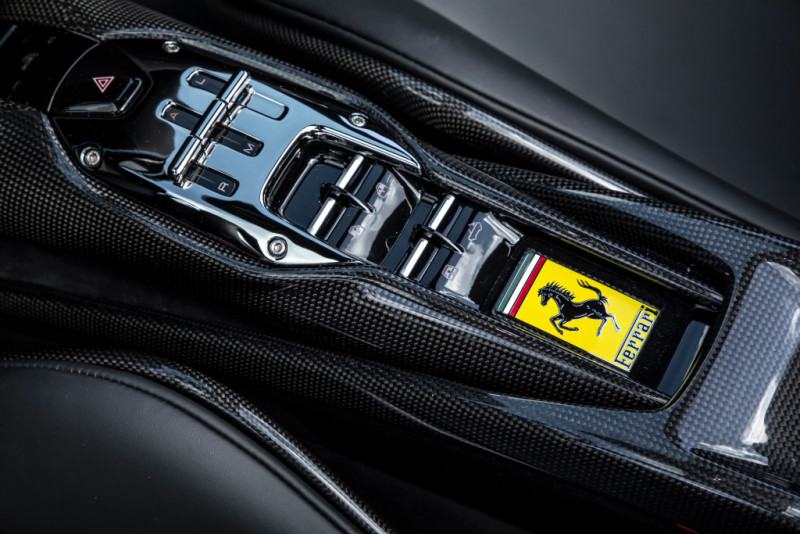 Thankfully, the cornering experience is sublime. The 296’s short wheelbase and low centre of gravity – 10mm tighter to the ground than the old F8 – make it feel supremely darty, with a nimbleness and an alacrity for directional changes that are simply sensational. The sense of connection through the steering wheel is brilliant, while the front end turns into corners with an almost psychic sharpness. Even on the poor road surfaces on the Futa and Raticosa passes in Tuscany, the 296 GTS proved brilliantly predictable and reactive, becoming even better resolved on more sweeping roads. There’s also epic grip: on the dry roads of my test, it proved very difficult to unstick the back end, even with the traction control turned off. Bumpy roads don’t faze it, either, since there’s a ‘bumpy road’ damper setting.

The SF90 Stradale-derived brakes are astonishingly good. One curious sensation is how the hybrid system regenerates the batteries under deceleration. Even when you don’t use the brake pedal, you can hear the callipers gripping the brakes. If you’re wondering about the 296 GTS name, incidentally, it comes from the displacement (2.9 litres), cylinder number (six) and the Gran Turismo Spider acronym. Another factoid for you: this is the first ever six-cylinder road-going spider to wear the Prancing Horse badge (the 246 GTS of the 1970s was only ever a Dino).

It’s a joy to report that, overall, the GTS succeeds in its mission to drive as much like the superb GTB as possible. This shouldn’t be too surprising considering that both cars were developed alongside each other. Yes, scuttle shake and extra weight do have a very slight negative impact on how it derives, but the benefits of open-air motoring will swing the deal for many (and Ferrari reckons about half of all 296 customers will buy the spider). At almost £280,000, the GTS costs about £35k more than the GTB. The bad news, if you want one – and you should – is that the waiting list is already over two years long.

An optional track-focused Assetto Fiorano package is available, consisting of race-derived Multimatic adjustable dampers; carbonfibre front bumper add-ons that deliver an extra 10kg of front downforce; and more use of lightweight materials inside and out (saving 8kg in all). Two further options are exclusive to the AF package: a striped livery inspired by the 250 Le Mans (not entirely aesthetically resolved in our opinion) and Michelin Cup2R semi-slick tyres. The Assetto Fiorano pack costs £25,920 and Ferrari reckons about one third of 296 GTS buyers will go for it.

Silhouette looks very similar to GTB, roof up or down. Weight is up by 70kg, rigidity not overly affected

Top down, GTS is a proper wind-in-the-hair spider, with a differently nuanced soundtrack to the GTB