With aggressive carbon styling and some serious power on board, R44 Performance’s G80 M3 is not messing around.

Opening a feature about a G80 M3 by talking about its looks might seem like picking low-hanging fruit, but far be it from us to turn down an easy meal, so pick we shall. However, the difference here is that we’re going to open this feature by telling you that, actually, we like the G8x M duo, which is probably not what you expected to hear (read?). Admittedly, it took us a while to warm to the styling, and while it’s not BMW’s finest design hour, it’s got a hell of a lot of presence, and we find ourselves drawn to the shape more and more. Our epiphany happened when we came across a G80 M3 at a show, and approaching it from the rear, we were struck by how incredibly fat and wide it looked. There was just something about it, and at that moment, we realised our minds had been changed. It’s a car that’s very colour-sensitive – the darker, the better, in our opinion – and we also prefer the M3 over the M4, the narrower four-door body accentuating the wide arches in a way the coupé does not. When all these elements combine, suddenly, the G80 M3 becomes a far more appealing prospect, and R44 Performance has absolutely nailed it with its awesome build.

As well as being a rolling showcase for everything that tuning and styling specialist R44 Performance (@r44performance) can offer, this G80 M3 belongs to company owner Rhys Herd (@r44erd), but his interest in BMWs extends far beyond simply business. First of all, there’s the extensive selection of other BMs that make up his collection, and they include an F20 M140i, G42 M240i, F80 M3 and G82 M4, and then there’s his long-standing love for the marque. “Since I can remember, I always had a soft spot for the brand; when I was studying motorsport, I rebuilt an E46 and the rest is history,” Rhys smiles as we chat. “The main reason for BMW being so special is the build quality, the engineering of the cars, which makes them easy for us aftermarket manufacturers. They also make a killer track car,” he adds with a grin. “My first BMW was an F22 M240i: it’s a mini M-car with the great B58 engine. I was 18 years old, and this was the easiest car to get my hands on and insure. It ticked all boxes, was fast, comfortable and can handle track days.” 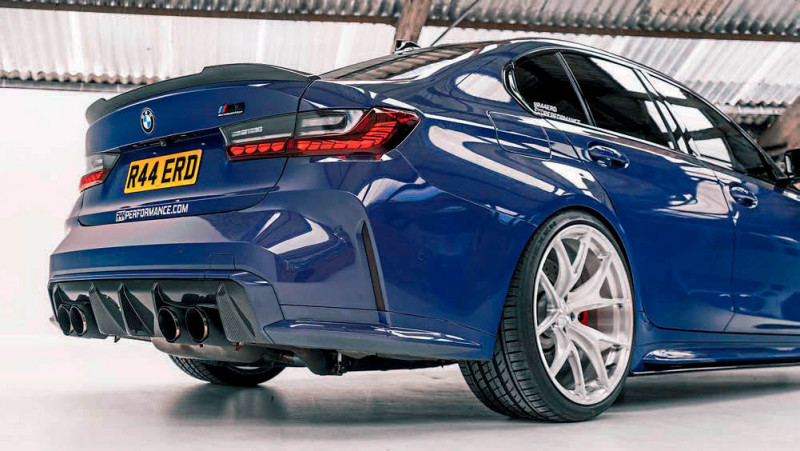 As far as the G80 is concerned, naturally, it was purchased for the company, but beyond that, Rhys had been eyeing one up for a while. “I had always wanted an M3 after having an F87 M2. I then started R44, and we manufacture carbon fibre aero kits, so this was our first full start-to-finish development car,” he says.

“I bought it brand new from BMW Park Lane. It was actuallythe first customer car to be collected.” As for the plan, well, there was only ever going to be one possible course of action… “To go full send!” Rhys exclaims with a laugh. “We wasted no time and had it fitted with a full carbon kit, lowered, and with an exhaust system in three days from the car being released.” 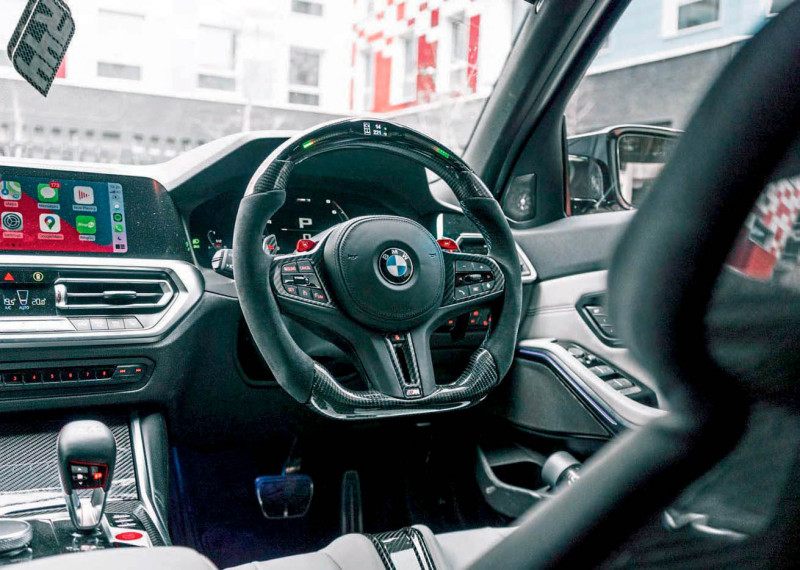 It’s only been modded further since then, and it’s a seriously comprehensive project. Seeing as the G8x styling is still something of a touchy subject for a lot of people, let’s attack that first because we reckon the R44 G80 gets everything right. As we said, dark colours work best, and Rhys has had his car wrapped in Inozetek Super Gloss Violet. It’s an awesome-looking colour that switches shades depending on the light, shifting from a dark indigo blue, through aubergine, to a full-on violet in direct sun, and it’s simply stunning. The colour makes the prominent grille seem farless so and does a wonderful job of accentuating the many curves across the G80’s body.

Of course, carbon is the name of the game with this build, and this G80 has been decked out in R44 MHC Plus carbon styling, and it’s really doing it for us. It starts at the front, where there sits that aggressive SP1 splitter that juts out past the bumper.

the fully forged RH82s, in staggered diameters, with 19s up front and 20s at the rear, fit perfectly and suit the whole look of the car so well

It’s joined by aggressive twin-fin front ducts, and the entire grille has been replaced with a carbon GT item. We’re not always huge fans of carbon grilles, but in this case, when you’ve got such a huge one, it really works, and these three elements combine to give the front end some serious visual impact. Working your way down the car’s flanks, you will notice the SK1 side blades, and if you look closely, you will also spot the replacement carbon side trims on the front arches, while at the rear, you meet the aggressive CS-style boot spoiler and MHC OEM+ diffuser. It’s finished off with the R44 OLED-style lights, which are inspired by the F8x CS and GTS rear clusters, look fantastic and don’t cost north of £7000 like the genuine F8x offering… 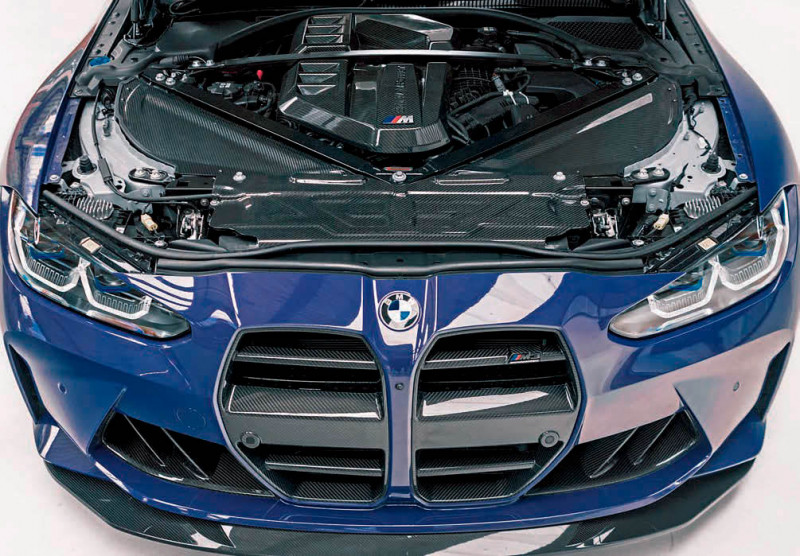 Even if you’re not a G8x fan, you’ll surely agree that all that carbon looks sexy as hell, it works so well on the M3, and R44 has done a fantastic job of enhancing the car’s appearance.

While we’re talking about carbon, it would be silly not to take a peek inside this G80’s cabin because if you’re a carbon fan, you’re going to feel very at home in here. First of all, you’ve got those incredible M Carbon Bucket Seats, arguably the sexiest seats BMW has ever offered in a car, and they are joined by lashings of carbon trim across the cabin, but the most interesting element is unquestionably the steering wheel. “I wanted to replace the OEM wheel as it gave me thumb cramp when using it on the track,” Rhys explains, “so I made a steering wheel that was shaped to suit your hands better. It was then wrapped in Alcantara and leather,” and while most people change steering wheels for aesthetic purposes, it’s rare to come across someone who’s changed their steering wheel because they wanted toimprove the driving experience. Of course, this wheel is a seriously sexy thing with its sculpted Alcantara grips, carbon upper and lower sections and digital display, making it a fitting interior centrepiece for this build. Naturally, with any modded build, we need to talk wheels.

Firstly, at a time when black wheels remain so popular among both manufacturers and modders, it’s great to see another car running something silver, it’s just refreshing, and they really stand out against the purple bodywork. And, secondly, well, there’s the simple fact that they look so sexy. “The wheels I am running at the moment were designed by me and built by my friend George at West Forged,” says Rhys, and the fully forged RH82s, in staggered diameters, with 19s up front and 20s at the rear, fit perfectly and suit the whole look of the car so well. We’re suckers for a concave design, and these are seriously deep, there’s detail in the scalloped edges, and the brushed finish is simply gorgeous.

The G8x M cars might serve up some awesome handling even in stock form, but the 4x4 ride height they come with from the factory is no good, and R44 has done away with the massive arch gap on the G80 via a set of MSS height-adjustable springs. The Extra Low kit allows you to drop your M car by up to 30mm front and rear while retaining the stock electronically adjustable dampers. What makes the MSS springs unique is that the kit uses a double-stacked setup at the rear, combining three different spring rates, which helps the car to retain the stock ride comfort, without resultingin an overly stiff ride, as is often the case with lowering springs. They’re not cheap for lowering springs, but we’ve not heard a bad word said about them; the visual results speak for themselves, and you can get Rhys’s thoughts on how they perform on the R44 YouTube channel. With this being a comprehensive build, the car has also been treated to some brake upgrades, and these include a pair of EBC two-piece floating discs accompanied by EBC RP-X brake pads plus HEL braided hoses, which all combine to deliver improved stopping power.

In terms of performance the standard G8x M cars aren’t exactly lacking, thanks to the 510hp and 479lb ft of torque on tap that the S58 lurking beneath the bonnet delivers. However,with a twin-turbo straight-six to play with, the gains that can be had from performance mods are huge. The temptation to tweak the S58 is impossible to resist, and this G80 boasts some serious power. Under the bonnet sits an Arma Speed high-flow carbon intake system, a pair of R44 200-cell sports cats have also been added, along with an R44 titanium exhaust system complete with carbon tips, and it’s all finished off with an R44 Stage 2 map. That’s all you need to extract some serious numbers from the S58, and while Rhys hasn’t had the G80 on the dyno since fitting all of the performance upgrades, on its last trip to the rollers, it made a substantial 650hp and 516lb ft of torque, so it goes without saying that this is a serious performance machine. As impressive a build as this G80 M3 is, it’s already been through four previous iterations before getting to this point, and Rhys is far from finished with it. “We have changed all the parts on the car four times now, so we are on the V5 look, and it has taken us one year to get here.

R44 Performance will be bringing out a new aero kit, so this will be next, as well as a carbon bonnet,” and there’s clearly no rest when it comes to developing car parts. In fact, with both a G81 M3 Touring and a G87 M2 already on order, Rhys and R44 Performance are going to be very busy indeed going into 2023.

And while the new M2 is another controversial-looking machine, judging by its G80 M3, we reckon R44 will be able to get it looking good enough to change pretty much everyone’s minds, and that says a lot about the power of a well-modded BMW.

Under the bonnet sits an Arma Speed high-flow carbon intake system, a pair of R44 200-cell sports cats have also been added, along with an R44 titanium exhaust system complete with carbon tips, and it’s all finished off with an R44 Stage 2 map