The Z4 M Coupé is a well-regarded modern classic, but why is there seemingly less love for the ever so slightly lesser-engined 3.0si?

The Z4 M Coupé gets all the attention, but the 3.0si is a superb sports car that deserves a lot of love.

There’s always a frisson of excitement when attending a motor show, and that was certainly the case at the 2005 Frankfurt event, as on the BMW stand was a brand new coupé that the company had previously stated it wouldn’t build. Was this a one-off design study, or would it make production? The answer was succinctly given by a genial member of BMW UK’s press office who was on the stand: “If a concept has towing eye covers, you can just about guarantee it’s more or less production-ready.” 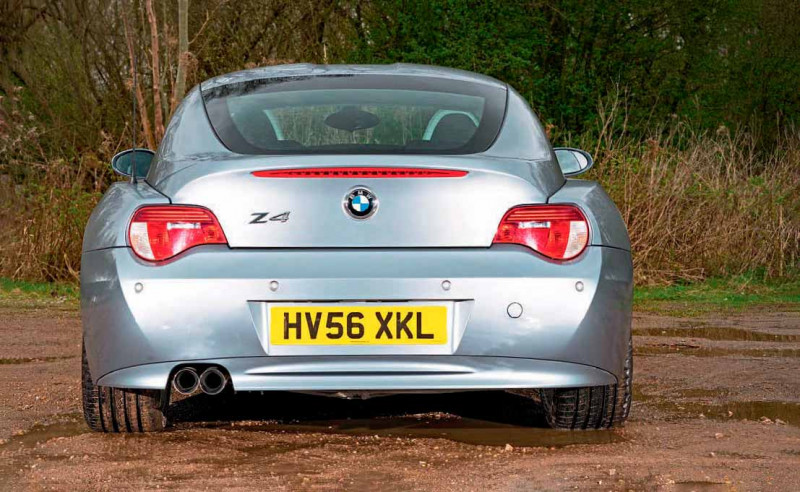 And in the latter part of 2006, the Z4 Concept Coupé entered the market in the UK, in the guise of the 3.0si and the fire-breathing Z4 M. While the Glacier silver paint of the show car had been lost, and a couple of details had been toned down, the production models were, more or less, as per the concept. While the M-powered model has forged a niche for itself as being one of the last of the naturally aspirated straight-six models, the 3.0si seems to have slipped under the radar and is today fast becoming a bit of a forgotten classic.

It’s got all the right ingredients to be a BMW great, from its sexy styling to its mechanical makeup, and despite its diminutive size, it’s actually remarkably practical and perfectly suited to everyday duties, providing two seats is all you need. 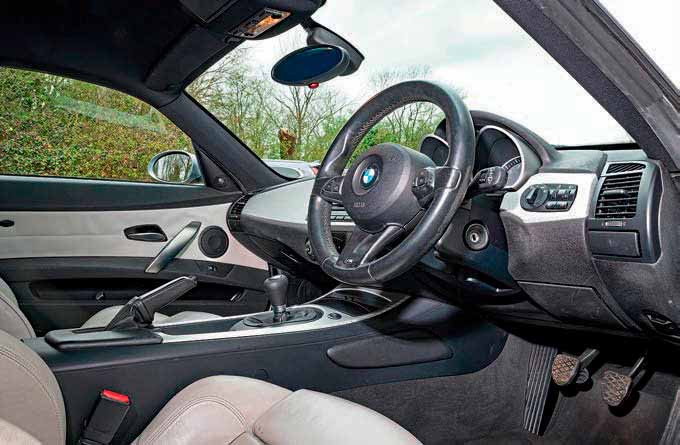 The Z4 Roadster had always been a stylish machine, fresh and modern when compared to the unashamedly retro Z3, but it really came of age when BMW took the plunge and built the coupé version it had always stated wouldn’t come. Along with its classic coupé proportions came a wild riot of flame surfacing and stylish Z-themed styling cues, and it still looks smart and stylish today. Conceived as a pocket GT, the Z4 Coupé took the Grand Touring concept and shrunk it into a compact two-seater.

Externally, the coupé received a double-bubble roof design, which acted as both aerodynamic aid and a means of generating increased headroom for the two occupants. Being introduced in late 2006, the year in which the roadster received its face-lift, the coupé shared that car’s updated looks. Thanks to its hatchback, the Z4 Coupé offered up a generous 340 litres of luggage space, plenty for two people venturing on a road trip, and much more useful than the roadster’s 260 litres. While the soft-top could be bagged with both four- and six-cylinder engines, there was only one engine variant for the coupé, and it was a peach.

Nestled up front under that long, sculpted nose was BMW’s latest incarnation of its 3.0-litre straight-six, which generated 265hp at 6600rpm along with 232lb ft of torque at 2750rpm. With the Z4 Coupé’s slim frame, this meant a 0-62mph sprint of just 5.7 seconds with an electronically limited top speed of 155mph. But performance didn’t come at the expense of economy, with the coupé returning a combined figure of 31.7mpg while emitting 213g/ km of CO2. As standard, the car was equipped with a six-speed close-ratio manual gearbox, though a Sport automatic gearbox was also available, its new torque converter and software offering a 40% improvement in the gearbox’s response time compared with a conventional auto and gearchanges that were twice as fast.

With the roadster having been designed as a standalone entity, its structural integrity was guaranteed, and BMW achieved its goal of creating a roadster with the stiffest body of any open-topped car. Adding a roof to the equation meant that the coupé enjoyed even greater structural rigidity, at an impressive 32,000Nm/degree, giving it one of the stiffest body structures of any production car at the time. And the addition of a solid metal roof didn’t harm the Z4’s impressively low weight, the coupé tipping the scales at 1395kg.

When we drove the car back in 2006, we were hugely impressed, especially with the car’s performance. The 3.0-litre straight-six was brilliant; gutsy in the mid-range, happy to chase the last few hundred rpm and with a zingy, metallic soundtrack that had BMW written all over it. The interior was also good, emitting a classic sports car ambience that sees you sat nice and low toward the rear of the chassis, gently rising bonnet in your sight. Sure, the dials might seem a bit fussy, and the optional sports steering wheel wasn’t the best, but overall the Z4 Coupé was a nice place to be. While the cockpit was nice and snug and cocooned you and gave the impression of having a sporting ambience, we did feel that it was woefully short of storage space. There were awkwardly shaped and hard-to-access door pockets and very little else in the way of stowage for assorted odds and sods.

We also weren’t huge fans of the electronic power steering, though, which could feel inconsistent and disconnected from the front wheels, robbing you of confidence and making the transition to oversteer – already tricky because of the Z4’s short wheelbase – slightly unnerving. If the M car’s hydraulic setup hadn’t been so good, the si’s electric setup might have attracted less criticism. The brakes, too, felt a touch overservoed, but once you got used to the feel they certainly felt more than capable of stopping the lightweight Coupé.

But how does the Z4 Coupé stack up today? The car you see in the pictures here belonged to photographer Rafe Abrook, and he certainly rates it as a forgotten modern classic. Since we photographed the car, Rafe has been seduced by a rather more potent weapon and has actually sold the Z4, but who could blame him when a Vauxhall Monaro, complete with a 5.7-litre LS1 V8 was the replacement! Don’t worry, though, he’s still very much a BMW fan with an E36 328i Touring with Sport kit preceding the Z4 and an E34 540i having recently joined his stable, too.

“I think had it for about a year which is about normal for me,” Rafe tells us, “I tend to chew through cars pretty quickly, so I can tick another one off my bucket list before it’s too late. This is the cause of much amusement among my friends as I usually end up pouring a fortune into correcting faults with them and then selling them after a year for less than I paid for them, plus the cost of the repairs! I do the work as I tend to think: ‘this one’s a keeper’, and then something else distracts me, and then I end up selling it on.”

Rafe can struggle to find cars that are suitable as he’s pretty tall, but despite its size, he found the Z4 was actually very practical. “I’m 6’ 8”, so I’m right at the limit of what’s comfortable, but the double-bubble, almost Zagatostyle roof really helps with the headroom. The boot’s really decent on it, too – much better than a Nissan 350Z. I’m a professional photographer by trade ,and I can easily fit all my kit in the boot, no problem at all. It’s a surprisingly practical car, so long as you don’t mind a low driving position and a reasonably firm ride.”

The Z4 proved to be a pretty reliable prospect in the year that he owned it, with just about the only major failing being a set of rear springs which had cracked – a fairly common fault on this model. He also carried out an Inspection 2 service on the 3.0si just after he purchased it, more for peace of mind than any real need, but it emerged from the garage with a clean bill of health. In the past, Rafe has carried out modifications to his cars – his E36 328i received hotter cams and an M50 manifold, along with a live map – but there’s not a huge amount to be gained from trying to tweak the N52 in the 3.0si. He did add the shorter, weighted gear knob that’s a popular modification on E46s, as he felt the original one was a bit plasticky and had an overly long throw, and the new one made the shift quality much more positive.

Changes to the exhaust were perhaps not quite so successful. “I fancied hearing a little more noise from the straight-six, and I did a bit of a cheap and cheerful rear silencer removal. In retrospect, it wasn’t the best idea, and although it sounded great when you were in the mood, eventually did become a bit wearing. It was boomy and tended to drone on the motorway, which got a bit painful,” he says with a laugh.

Overall though, Rafe loved his time with the Z4 3.0si. “The Z4 was a really fun car and is genuinely quick,” he says, “It feels like a proper sports car and is an absolute delight on the bends. The electronic steering is perhaps not quite as good as the setup on the M car, but the engine is an absolute marvel. I loved the engine in my 328i, but the N52 in the Z4 really is something else – I think it’s one of BMW’s great engines. There’s torque throughout the rev range, and it loved to be revved to 6500rpm and never felt strained, but it was still capable of returning over 30mpg.”

We’ve always admired the Z4 3.0si, and listening to Rafe chat about the car we can’t help but think that it really has been a little bit overlooked in the modern classic world. “Prices haven’t moved all that much recently, and it looks like really good value in today’s market,” says Rafe. “And even today, it still feels fun and interesting, and I really can’t see how you could justify the extra £10-15k to buy the Z4M – the 3.0si really is quick enough and a thoroughly enjoyable drive. I loved owning it, and you never know, once I’ve scratched that V8 itch, I might get another.” Sound advice from Rafe: get a Z4 3.0si before they all get snapped up.

The Z4 was a really fun car and is genuinely quick. It feels like a proper sports car and is an absolute delight on the bends

3.0-litre N52 straight-six is an absolute gem of an engine.

Figures in brackets for automatic transmission

The cabin is short on stowage space, but there’s a surprising amount of headroom.