How exactly is the car you’re looking at here the most sensible choice in the entire BMW 5 Series line-up? It looks astoundingly good, the regular M Sport image improved upon further by the addition of the Pro Package. That brings with it darker sun protection glass for the rear, BMW Individual high-gloss Shadow Line extending to the grille and exhaust outlets, and a body-coloured M Sport spoiler on the boot lid. Small additions, perhaps, but effective in terms of highlighting the ‘LCI’ facelift that was introduced to the 5 Series last year. 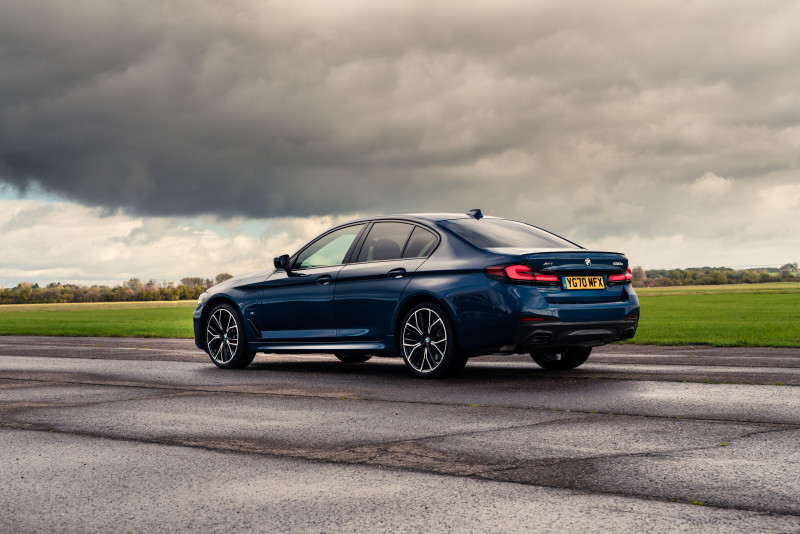 Anyway, we’re not advocating for this model purely because it looks the bee’s knees. After all, you can marry the M Sport Pro image with any of BMW’s fine engines. This car, however, is the latest evolution of the 530e, the – for want of a better word – entry-level plug-in hybrid model. Sure, in left-hand-drive markets, there’s a 520e or, if you have deep pockets, you can order the six-cylinder 545e in the UK, but ignore all that, as the 530e is the one you really want. 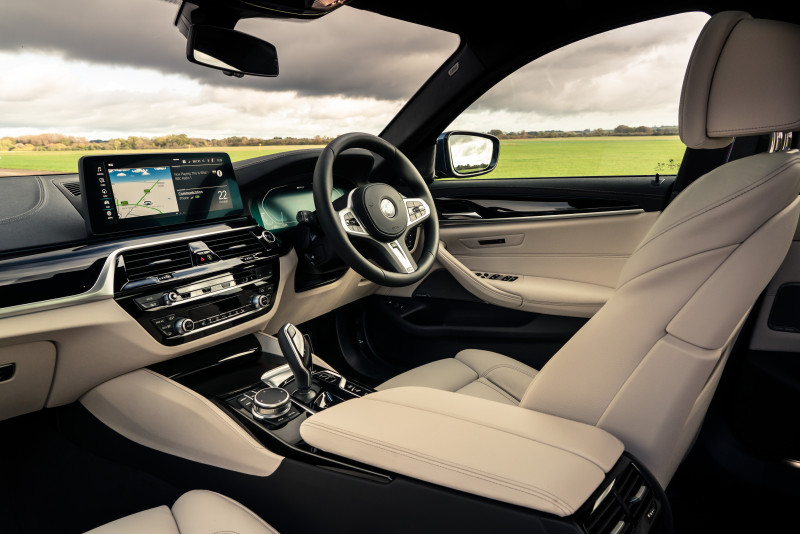 The thing is, while the BIK and the headlong rush toward electrification of the car might be the catalyst for a potential buyer to check the 530e out, once they do, they’ll realise what a superb car it has evolved into. The 530e first launched in 2017, bearing the ‘iPerformance’ tag to show that BMW was pairing its electric ‘i’ brand with, well, performance. Under the bonnet was a turbocharged 2.0-litre petrol engine making 184hp. Between it and the usual ZF eight-speed auto sat a 95hp electric motor, for system maximums of 252hp and 310lb ft of torque. It did 0-62mph in 6.2- seconds and was officially capable of over 30-miles on purely electric power with zero nasties coming out of the exhaust.

Fast forward to today, and you’d be forgiven for initially questioning where the progress is. BMW still quotes about the same electric-only range. Nonetheless, it’s more impressive when you realise that the new car has been tested on the much more stringent WLTP regulations, which means that the quoted figures are more realistic. Though as with all plug-in hybrids, the ludicrous sounding mpg numbers are only achievable if you religiously plug the car in to charge up the battery pack whenever possible.

For the record, BMW has upgraded the electrical system in the 530e, adding a more powerful motor – now a 109hp unit for a total system maximum of 292hp – and upping the energy capacity of the lithium-ion battery pack from 9.2kWh previously to 12kWh now. That explains the longer real-world electric range. That 292hp output, meanwhile, is available for up to 10-seconds as part of the standard ‘XtraBoost’ feature (you can’t criticise the Germans for coming up with imprecise descriptions, can you?). Choose Sport from the Driving Experience Control system, slot the lever across into the M/S position, put your foot all the way down to activate the kickdown function and that’s where it comes into play, allowing the car to hit a sensational 0-62mph time of just 5.9- seconds.

Ten seconds of XtraBoost doesn’t sound like a lot, but how often on the public road can you really hold the throttle open fully for? It feels rapid whenever you want it to, like a proper sports saloon should. When you’re not testing that out, the 530e is wonderfully quiet and refined and, while the hybrid system does add weight to the car, BMW’s engineers have done a brilliant job of disguising it and ensuring that the suspension can comfortably cope with it.

The M Sport Pro package brings with it adaptive dampers, and the 530e is comfy and smooth by default, despite the presence of lush 20-inch alloy wheels and low-profile tyres. Things firm up notably in the Sport setting, allowing you throw this big car around with no small amount of pleasure.

Thankfully, that is not lessened when you look at the car, as BMW has not grafted the huge radiator grille of the latest 7 Series, X5 and X7 onto the front of the 5 Series (never mind that of the 4 Series). Yes, the 5 does get an enlarged one-piece kidney grille, but we feel it works quite well with the redesigned front bumper and headlights. New wheels and colours are complemented by a restyled rear end, too, featuring new LED lights, new bumpers and snazzier looking exhaust outlets across the range. You can have red-painted callipers for your M Sport brakes for the first time, as well, instead of the standard blue. Nothing drastic, then, but the newer model is certainly fresh looking, and more handsome than ever.

BMW has, arguably, done more obvious work on the interior, where new materials and switchgear are hardly noticed as the focus is on drafting in the latest infotainment technology. To that end, the BMW Live Cockpit Professional system is standard, with its large digital instrumentation screen and a responsive centrally mounted touchscreen, too. As we’ve tested elsewhere in the range, the rotary controller remains, almost pointless gesture control is a feature and there’s a pretty decent voice control function, too. The latest BMW operating system upgrades include a cloud-based navigation system called BMW Maps, remote updates for the software and smartphone mirroring for both Apple and Android devices.

The passenger space is unaffected by the packaging of the 530e’s hybrid components, but one of the few drawbacks of the car is reduced boot space. Although the boot floor is flat, and even has space underneath that could accommodate the car’s charging cables, the measuring tape shows that it holds 120-litres less than, for example, the 520d’s, meaning a reduction in capacity from 530-litres to 410-litres. Rather than look at that as a negative, think of it as all the excuse you need to go for the Touring alternative. As part of the LCI update, the 530e model range has been expanded to include the estate body style, and it’s also possible to pair the hybrid powertrain with xDrive all-wheel drive.

Start thinking like that and suddenly the 530e doesn’t appear to be the sensible option after all, with the price rising rapidly. And we’d be doing our readers a disservice if we didn’t point out that the 530e makes most financial sense as a rear-wheel-drive SE saloon. Still, think of the money you’re saving on BIK by going for the hybrid, and then spend it all on the M Sport Pro version. It’s the most sensible thing you could do.

It feels rapid, like a proper sports saloon should