It’s clearly been a labour of love. A high school crush consummated after decades of yearning, you can tell just from the way he looks at it.

I’m standing outside the weathered roller doors of a closed factory as a gleaming cobalt blue Giocattolo Group B rumbles quietly up the driveway, gravel clings then drops from it’s sticky rubber. 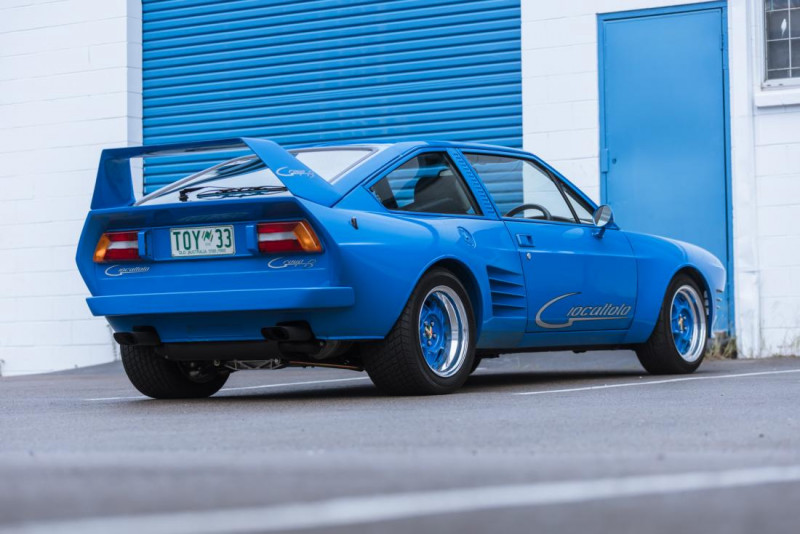 Harsh Australian sunlight plays over the sculpted curves, vents and flares. The colour mirrors the Queensland sky, reflected clouds distort as they trace the flanks. The cars profile is at once familiar yet alien, the throaty engine sound is at odds with its diminutive stature. It’s low slung yet compact.

The colour and the styling are so very 1980s, a dab of excess with loud graphics trumpeting its identity to the world.

It’s a unique collision of Italian silhouette, interpreted styling and racecar pragmatism. The understated V8 growl from the rear mutters at passers by as it rolls to a stop.

Some may even call it crass, but there’s function in its form. 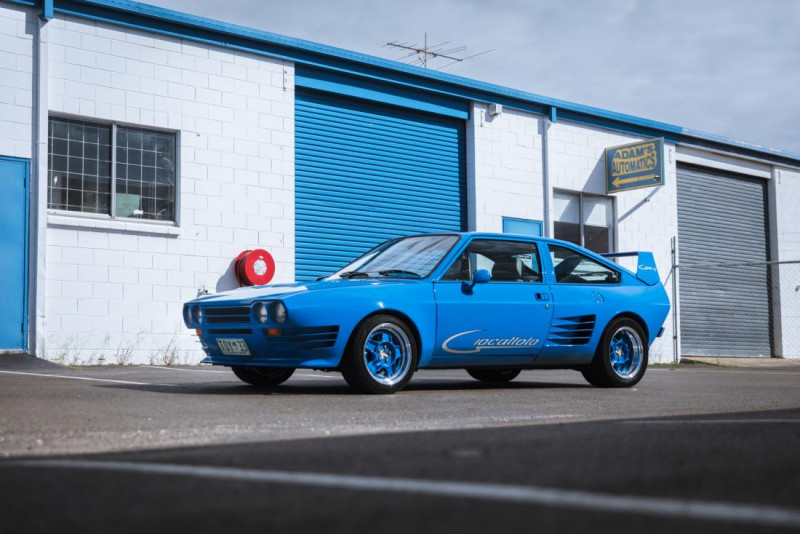 The 1980’s saw fortunes being made and lost as brash entrepreneurs and property magnates gambled and spent. And nowhere in Australia was this more so than in the state of Queensland, a place of sun drenched beaches and rapidly growing high-rise towers.

Time-shares and barely paid for Porsches and Ferraris’ rubbed shoulders on the shiny new promenades, along with Ray Ban sunglasses, peroxide, skinny ties and pointy shoes.

Think of it as Florida with less Zimmer frames. An antipodean episode of Miami Vice, that is if you’re old enough to remember who Don Johnson is.

THE COLOUR AND THE STYLING ARE SO VERY 1980S, A DAB OF EXCESS WITH LOUD GRAPHICS TRUMPETING ITS IDENTITY TO THE WORLD.

In-your-face V8 adaptations of family haulers featured bolt on body kits that resembled a Storm Trooper’s lunch box and paid homage to a homegrown touring car racing series that worshipped at the altar of burning rubber. DTM it was not.

As space shuttles soared overhead and the mortar holding the Berlin Wall together fatigued, a couple of guys figured that Australia needed a world-class super car. Something more than a massively overpowered chassis from either GM or Ford. A driver’s car to flaunt of the world stage.

Entrepeneur Paul Halstead rode the early wave of computer technology through the 1970s. But away from the black screens and blinking green cursors he steadfastly remained a fan of high performance cars and motor racing. 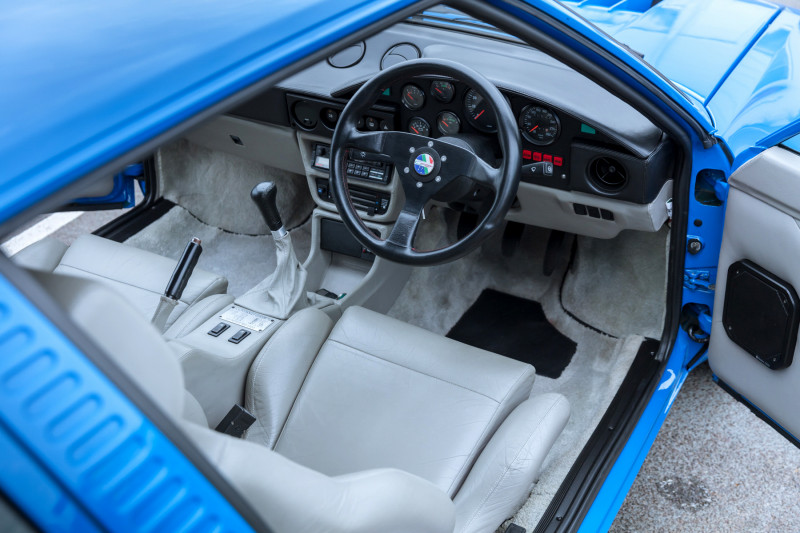 Back then Halstead’s Sydney based Toy Store imported CKD Detomaso Pantera’s as well as retailing Porsche, Ferrari and Choppard bling for the nouveau riche. The Italian connection remained as Halstead’s engineering business also built and exported Cleveland engines back to Italy to power the De Tomaso brand.

Lock cut his race engineering teeth with the McLaren Formula 1 team; fettling cars for the likes of James Hunt in the devil may care F1 racing days of the 1970s.

'To build an entire car from the ground up was going to be a nightmare', says Lock. 'Every door handle and lock has to pass design rules to be legal, so the decision was made to use an existing car as a platform'.

That platform was the Alfa Romeo Alfasud Sprint. The germ of the idea stemmed from a one-off lightweight Group B homologation special built by Alfa in the early 80s. This car used Alfa’s 2.5 litre V6 nestled in the rear hatch.

Lock set to work using the Alfa V6 and the Alfasud Sprint the basis, along with a ZF 5-speed transaxle to turn the rear rubber.

Underneath, Lock re-engineered the Sprint, equipping it with a new strong, yet lightweight rear sub frame. The frame and body of the car, soon to be dubbed ‘Giocattolo’ (Italian for Toy), made extensive use of carbon fiber and kevlar. Materials almost unheard of in a time when a mobile phone was the size of a beer cooler.

The Australian arm of Alfa Romeo wasn’t exactly enamoured with the notion of a business remanufacturing its cars at the time and sourcing the V6 engines was proving to be an issue. 'We couldn’t buy bare shells or engines for the cars, we had to buy complete brand new Alfas and strip them down,' says Lock.

Perhaps unsurprisingly, given the team’s penchant for Italian lookers with a Detroit heart, the Giocattolo found power in the form of a pushrod V8, though not of the Ford variety. GM’s Australian brand, Holden had a 5-litre (305ci) fuel injected V8 on offer, But not without some significant Modifications. British touring car veteran Tom Walkinshaw had set up shop in Australia and was breathing life into factory high performance Group A specials as well as Holden’s touring car race team.

The Giocattolo Group B uses a Walkinshaw manipulated Holden V8, however, Lock’s team also added a custom plenum and a proprietary twin throttle body set up to make that cast iron powerplant breathe. GM even allowed testing at its test track.

In 1988 the car saw the light of day. The result was a 2-seat mid-engined 220kW (300hp) supercar with a leather interior and Recaro seats that, despite being equipped with little luxuries like air conditioning and a premium sound system, tipped the scales at a mere 1085kg.

Top speed is a claimed 260km/h. Which according to anyone who’s driven a Giocattolo fast is an attention getting experience, mainly due to its claimed tendency to lift its front wheels of the ground.

Caloundra, on Queensland’s Sunshine Coast was home to the rather bespoke little Giocattolo factory. It’s humbly tucked away in amongst some other old industrial units.

This car is production number three, only 15 Giocattolos were ever made. Government funding for a low volume-manufacturing scheme was pulled in 1989 and Halstead was forced to close the doors on his vision of an Australian supercar.

Fourteen examples are still in existence, one having been involved in a fatal high speed racing accident. Jason Overland owns this example. As a born and bred Caloundra kid and as a car nut, Overland grew up with a fascination for the Group B that was being built in his home town. 'We’d ride around on our bikes as kids just trying to spot one', he says. 'We’d hear rumours of where they were going to be'.

Overland admits it a stretch to find one of his own, and grins sheepishly when I ask him how much he’s spent on getting this example back to its current gleaming condition. However, it’s also the expression of a man smitten, after a stream of lesser vehicles passing through his possession he has found 'The One.' It’s clearly been a labour of love. A high school crush consummated after decades of yearning, you can tell just from the way he looks at it.