It’s very easy to go fast in modern cars. Well, that’s a flippant generalisation; it’s easy to go fast in a lot of old cars too, and many new cars are slow; what we’re getting at is that the relentless march of consumer-pleasing in terms of soundproofing, lightness of touch and the anaesthetising of the driver experience means that the modern motorist has lost a certain sense of wonder. If it’s easily achievable for any old humdrum hatchback to crack 70mph and onwards without the driver having to hang onto the wheel for dear life and try to make their peace with the almighty as they weave between the catseyes, then where’s the sense of achievement? 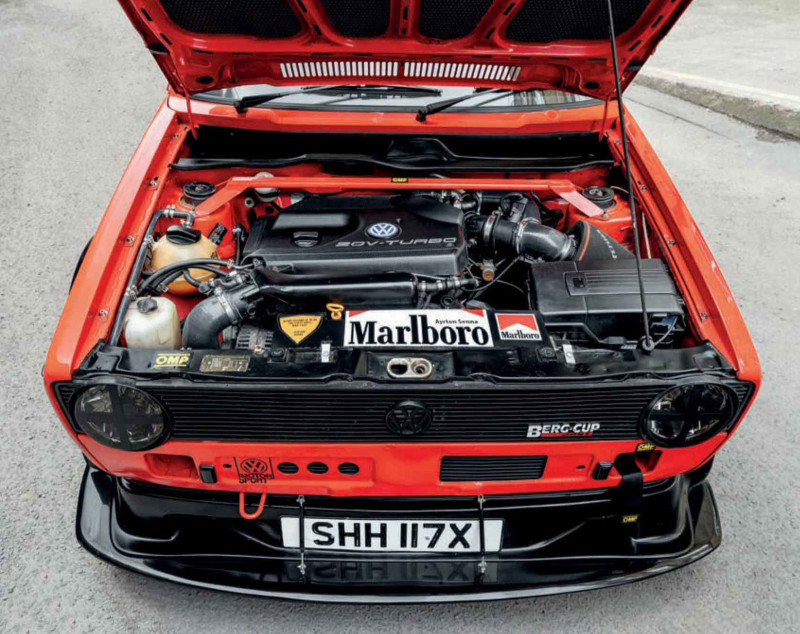 There have, of course, always been people keen to tap into the inherent adrenaline of the act of going fast, who appreciate that speed thrills and it should be a visceral experience. Since the dawn of the motor-car itself, frazzled hedonists have been trying to make them go as fast as possible, and these white-knuckled lunatics have been taking to race tracks, dragstrips, salt flats and banked ovals for well over a hundred years in search of those mythical, intangible speeds. 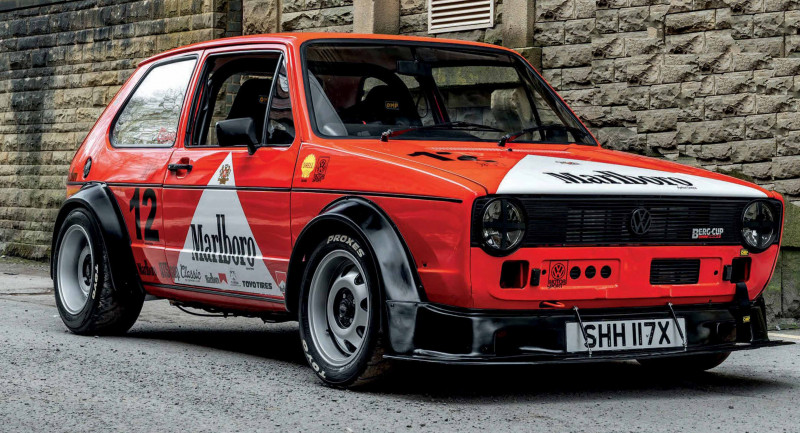 Lee Walmsley is one such lunatic. The car you see here began life as an unassuming 1.0-litre Golf C back in 1983, a lowly trim level sitting at pretty much the furthest end of the spectrum from its GTI stablemates. But as you can see, there’s nothing lowly about it now. This isn’t just a rebuild, it’s a full-on rebirth. 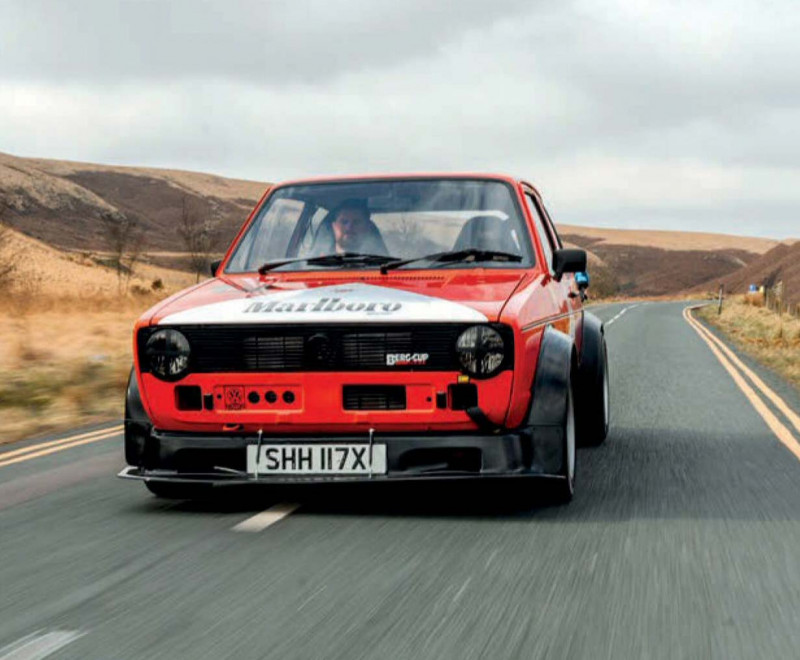 “I’d always wanted a Mk1 Golf, ever since my dad had one when I was a child,” Lee explains. “After all those years of dreaming, my partner bought me this car for my 30th birthday! At the time it was running a Mk2 KR 16v engine, with Dell’Orto twin 45 carbs and high-lift rally cams.” The evolution had evidently already begun, as is so often the case with old Golfs, but it’s safe to say that simply enjoying the fruits of someone else’s labours wasn’t going to be enough for Lee. It wasn’t just the lifelong desire for a Mk1 Golf that was feeding his momentum monster; the need for speed was deeply interwoven with his frontal lobes, and there was no way this Golf wasn’t going to end up going faster. Although perhaps he didn’t imagine things going quite this far…

“My plan was to give it some modern reliability,” he says, “and there was the added benefit that a modern engine would be easier to tune.” He’s not wrong, and once you plunge down that particular rabbit-hole there’s no telling how deep it’ll go. ‘Very deep indeed’ appears to be the answer in this case, and it all unfolded for Lee as he was peeling apart a Mk4 Golf donor car. Said Mk4 was running an AUM 1.8T in 150bhp guise, but this was merely the starting point. Lee knows whereof he speaks when it comes to mucking about with VAGs, as his car history is positively dripping with the stuff: having learnt to drive in a breadvan Polo at 16, he then graduated to a couple of ABF-powered Mk3 Golf GTIs, a Mk3 VR6, and a Mk2 GTI 8v. He’s also had an Audi A4 DTM, a Skoda Octavia vRS, and co-owns with his partner a Corrado VR6 that’s been fully rebuilt by JMR Racing. Long story short, he knows how to play the VeeDub game.

So this was never going to be a case of simply dropping a stock 1.8T into the Mk1 and seeing what happened. The AUM was treated to a K03S turbo along with a custom air intake, a bespoke 2.5in downpipe, and a straight-through stainless steel exhaust system.

Naturally a little ingenuity is required when you’re fitting an engine somewhere that it ought not to be, and sparkles of this lateral thinking can be found liberally sprinkled throughout the engine bay. The intercooler was originally designed for a Mercedes Sprinter van, while the radiator that’s neatly wedged into its compact slot is a Mk2 Golf item with twin fans. With a Stage 2 remap, peak power is up to a hysterical but still eminently usable 246bhp. And it follows that further magpie parts liberation would be necessary throughout the install – after all, throwing that sort of grunt through the stock Golf C’s transmission and driveshafts would most likely have everything melting like chocolate in no time, so Lee has sensibly upgraded things a bit… the gearbox is an 02J five-speed unit from a Mk4, while the driveshafts are stronger Mk2 items. Indeed, he’s completed a comprehensive beefing-up throughout the chassis, with the front brakes having been liberated from a G60, and the suspension being totally reworked with KW coilovers, polybushes everywhere, and a whole bunch of bracing to get everything stiffer than a Pfizer test facility.

The most noticeable chassis alteration from outside is that the Golf’s running extremely wide wheels – 7in at the front, and a sodding great 9in out back – although you’d be forgiven if your eye wasn’t immediately drawn to those, as it’s the brawny Berg Cup bodykit that’s doing the figurative heavy lifting here. Wide as hell with aggressive race-bred aero to augment the de-bumpered look, it creates a massive visual impact – and the artful livery makes clever use of the original Mars Red paint.“I wanted to have this livery because it really fits in with the Berg Cup racers of the 1980s era,” Lee explains. “The Marlboro livery was first seen on Mk1s in 1980, so this is all period-correct – but I also love Formula One, so I decided to replicate the ’80s style decals and dedicate the whole look to Ayrton Senna.” It’s an awesome look that suits the old-school racer vibe so well, and as we’ve seen from the specs, this perky little Golf is more than paying lip service to motorsport pretensions. This thing is serious.

“For the sake of maintaining a little originality, the car is still fitted with its factory head unit,” says Lee, “although all of the speakers have been removed to save weight – the sound of the exhaust is music to my ears!

“I own the Classic VW Owners Club, and I would like to say a massive thank-you to all our members for their support,” he continues. “We have lots of meets and events coming up soon, all of which can be found on our Facebook group.” It’s a good way to keep up with Lee’s manoeuvres in the Golf, as he’s extremely keen to get out and about and stretch its legs whenever possible. The car has been built to be used, and used hard… and that includes all the entertaining foibles that driving a classic car entails.

“I love the seats, but they are hard work to get in and out of,” he laughs. “And the wing mirrors do have a habit of folding themselves in above 50mph.” All just character though, isn’t it? The give-and-take inherent in owning a proper car rather than a generic semi-autonomous box on finance. It’s this physical and emotional connection that ensures Lee’s creativity is never sitting still: future plans include swapping out that 1.8T motor for an eraappropriate 16v ABF on lumpy cams, to fully complete the Berg Cup vibe. But for now, with flames spitting and gravel scattering, Lee is busying himself with that simple and noble pursuit – going fast in old cars. Not always easy, but boy does it feel good.

ABOVE: With all those braces, Lee’s Golf is stiffer than an overdose of Viagra. Bucket seats, harnesses and rollcage complete the racing vibe. Flat bottomed suede steering wheel is dripping with race car chic. Marlboro livery is a tribute to F1 icon Ayrton Senna. 1.8T may not be period correct, but boy, does it pack a punch!

The roots of the Berg Cup stretch back to 1987, as motorsport authorities sought to find a home for all the Group 2 and 5 cars that had recently been outlawed. After much head-scratching, there was a groundswell of enthusiasm for the Berg Cup series – held across a dozen hillclimb venues in Germany (‘berg’ translating as ‘mountain’), the Cup was embraced by fans and entrants alike, and has been running ever since. There are various different classes in which entrants can compete; for example, Group H is a pretty extreme set of regs in which cars such as Mk1 Golfs and Polos run bespoke 1,300cc engines with ITBs, bike heads, high compression and lairy cams, kicking out 200bhp or more. You also see a lot of 2.0-litre 8v and 16v builds, and all manner of drivetrain layouts. It’s not just VAG either, you see Opels, BMWs, Porsches and all sorts competing. But the aesthetic is unmistakable across the classes: extreme aero, wide footprint, massive contact patch – everything required to get up the mountain as quickly as possible. We approve!

“My plan was to give it some modern reliability”

Nice job for this Mk1 Golf/Rabbit!

I owned a red  1983 Volkswagen Golf Mk1 GTI from the first series with the 1.8-litre engine and 5-speed manual. Till today I have found no other car that was so much fun to drive like the little GTI, by today standarts it is slow… but it was a pleasure to drive, unfortunatly a drunk woman with here BMW drove into my parked GTI.