My first encounter with the Lancia B20 GT Outlaw came out of nowhere. It was the Tuesday morning of Monterey Car Week, just before my favourite event takes place: the Carmel Concours on the Avenue. I was driving a bit of an outlaw myself, a GTO Engineering Ferrari 250 SWB Revival car.

Just as I parked in my habitual parking spot in front of Bruno’s Market off Ocean Avenue, I heard a rumble coming down a small side road. I quickly jogged through an intersection only to be narrowly missed by this devilish looking hot rod, which looked anything but American Muscle. Chopped and lowered, blacked out and not declaring its origins, it compelled me. I searched the concours field until I found it again. Still enamoured, that evening at a friend’s car week party, I mentioned this astonishing machine to a stranger over cocktails. 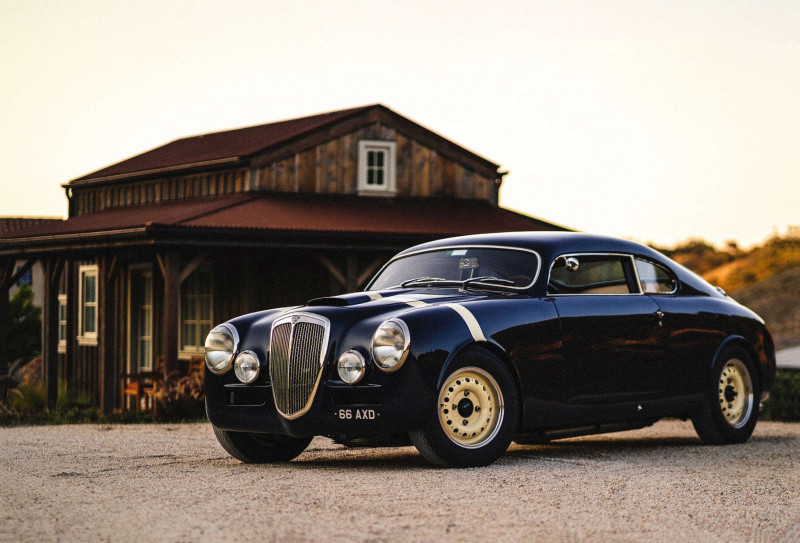 ‘Oh yes, well, that’s my car. I built it,’ said Wayne Kelham in a modest tone that matched his attire. I was stunned and excited to dig deeper into what the vision really was. Little did I know that, on the same day, someone else had taken notice of the build and wanted one himself, but we’ll get to that later.

EVERYWHERE YOU LOOK, YOUR EYES WILL SETTLE ON SOMETHING NEW AND AESTHETICALLY PLEASING

A Lancia Aurelia may not be something you think of initially when it comes to 1950s Italian sports racers. But in fact, the Lancia GT20GT car was probably the very first Gran Turismo. Equipped with a V6 engine in a strong tubular chassis and possessing an Italian pedigree, the Aurelia GT was embraced by aficionados and competed in such legendary races as the Mille Miglia and Targa Florio. For decades, these cars have been campaigned by many significant drivers. 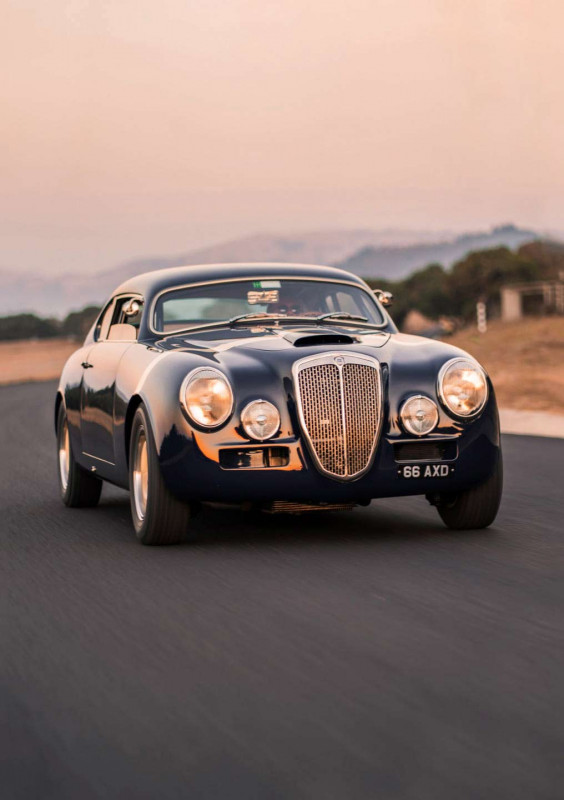 Enter Thornley Kelham with a solid career of fine restoration and service in Gloucestershire. One standout car was the Bracco Aurelia B20GT, a special racer with a record including second outright in the 1951 Mille Miglia and a class win at the 24 Hours of Le Mans. The Bracco was an ambitious project for Lancia, featuring a chopped roofline, an uprated motor and a streamlined body to keep it competitive in a heavily populated race class.

Fast forward to 2015 on the lawn at Pebble Beach where Wayne and company were displaying the B20GT in front of a captive audience. They were quickly approached by a collector in the US, who was interested in something similar with modern upgrades. This is the essence of the outlaw, isn’t it? ‘We had little to no hesitation when it came to agreeing to this build. We couldn’t wait to get back into the workshop and get started on a game plan.’ 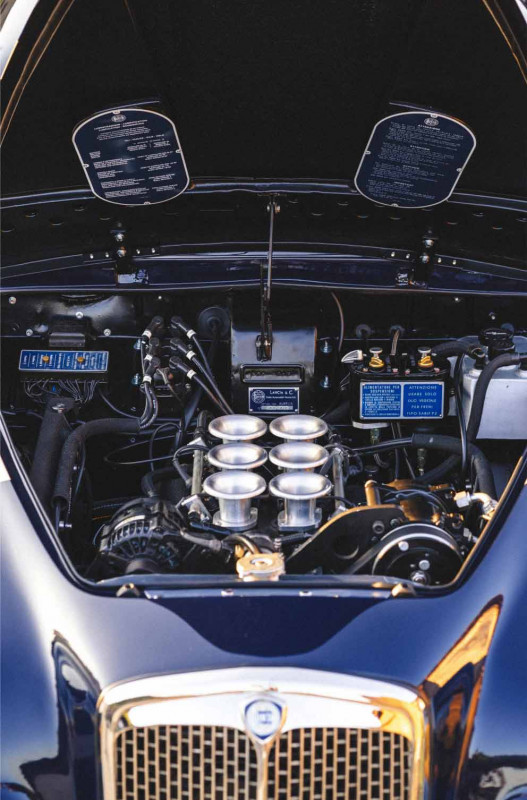 And getting their hands dirty both inside the shop and in the design studio they did. From start to finish, it takes an average of two and a half to three years from concept to completion. But these new outlaws couldn’t come from a significant race car or prototype – no, they always get built from more standard machines modified to fit a customer’s vision.

‘Where did we find donor cars? Little barns I suppose,’ Kellam said with a laugh. ‘Could be in Europe or in the US – wherever we could get them, frankly.’

After knocking on enough barn doors, they found a dishevelled sixth-series Aurelia, stripped it down to the bare bones, and began to chop, widen, and create an outlaw. More than 5000 hours were invested in that first car, as a kind of test case. Having a large amount of creative licence to construct what they thought would be the best interpretation, Thornley Kelham and team penned something truly remarkable.

Whenever I come across a car like this, one looking to break a mould and show us something we never thought we wanted, I always think about the challenge and tribulations it took to get there. Wayne was quick to tell me that the biggest challenge was the metal work. An estimated 1500-1800 hours of work just to repair rust and body work with a myriad of passes on each panel – extensive work with the English wheel and countless trips to the tool room with work by gifted craftsmen. A passion project on both ends of the court, the first car was completed and shipped over to US, right onto Ocean Avenue.

Now to our subject car, number three. I was far from the only one to take notice of the Lancia Outlaw that day. Circling the B20GT like a curious shark in Monterey Bay, Tex Otto was enthralled by the overall essence of the build and had to know its origins. He soon connected with the owner and the craftsmen behind it all. A build slot was locked in, and the fun was about to begin. 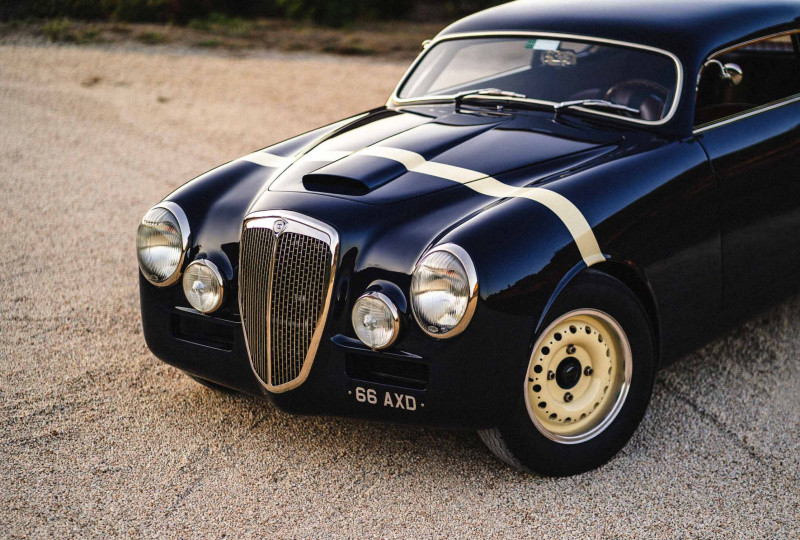 Without question, Tex Otto is the right custodian for this special Lancia Outlaw. His background as a creative director and graphic designer has given him such a keen eye and attention to detail – both elements required to create this wonderful rolling sculpture.

Combining his professional experiences and personal automotive passions, Tex had no shortage of vison and input, which was something welcomed by Wayne and staff. It’s a collaborative effort, supported on all fronts. What was delivered was something exclusive and exceptional. For the car to set itself apart from its predecessors cosmetically was not something Tex had expected, but that was absolutely what this build achieved. Nickelplated brightwork items such as the grille, headlight surrounds and windshield trim really make Tex’s car pop and not seem as sinister in style as many other outlaws. To complement the phone-dial lightweight rims, painted in a contrasting cream, are the frosted art deco headlights. They were only offered on the earliest Aurelias in the day and this will be the only Kelham Lancia outlaw that's equipped, says Tex. 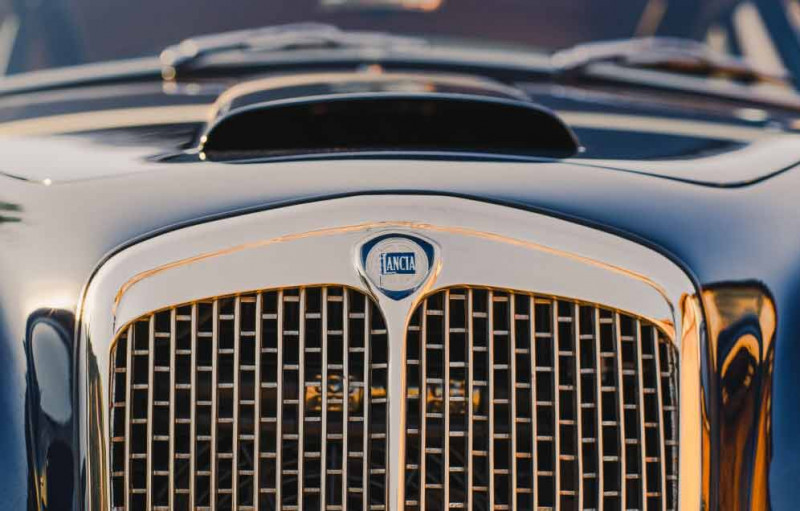 ‘When I was in England looking at the car during Retromobile, I noticed them fitted on another donor car. When Wayne offered them up for my build, it was just so easy to say yes.’ Everywhere you look, your eyes will settle on something new and aesthetically pleasing. From the diamond-stitched red leather race seats, to the upgraded pedal box, the six carburettor trumpets and the knurled wooden steering wheel, every detail seems right. A wonderful surprise was seeing a rear licence plate light housing become more than normally meets the eye. When I asked Tex to open the rear boot to get a peek at the spare, he gave a push and twist: there was the space for the key tumbler and lock.

‘The cosmetics are really a composite of many collector cars I’ve owned over the years. Ferraris, Cobras and hot rods. This was a way to honour all of them and make something unique to me and my automotive journey.’ Power comes from a 2.8L Lancia Flaminia motor with a different cam profile, making a stout 225hp (165.49kW). There is also a Flaminia gearbox with much taller ratios. The Nardi floor shifter is a major aesthetic element for me and pairs nicely with the optional Nardi bonnet scoop. Rack and pinion steering, air-conditioning and Wilwood disc brakes make the Aurelia useable in modern traffic.

‘On the Tour D’ Alps we were chasing this long hood Porsche 911 RS. Just right on his hip all morning, you know? Once we got through a long pass, he pulled over and waved us through. He just couldn’t believe we were as quick and consistent as we were. Just demonstrates the overall drivability of this car – it’s fantastic,’ said Tex during the photoshoot in Carmel.

THE COSMETICS ARE REALLY A COMPOSITE OF MANY COLLECTOR CARS I’VE OWNED OVER THE YEARS. FERRARIS, COBRAS AND HOT RODS. THIS WAS A WAY TO HONOUR ALL OF THEM AND MAKE SOMETHING UNIQUE TO ME AND MY AUTOMOTIVE JOURNEY

Wayne is currently finishing car number five while number six is in metal work at the moment. As far as cars seven to nine are concerned, well they are still up for grabs. The buzz within the car community is enthusiastic. ‘Hearing Danny Sullivan (former Indianapolis 500 winner) say that the car was fantastic was rewarding in itself. We knew we were doing good things, but the reception from our peers made it all worth it,’ said Wayne. ‘Tex’s car was absolutely an “ah-ha!” moment for me and our team wanted to use it as the starting point for the next build.’ 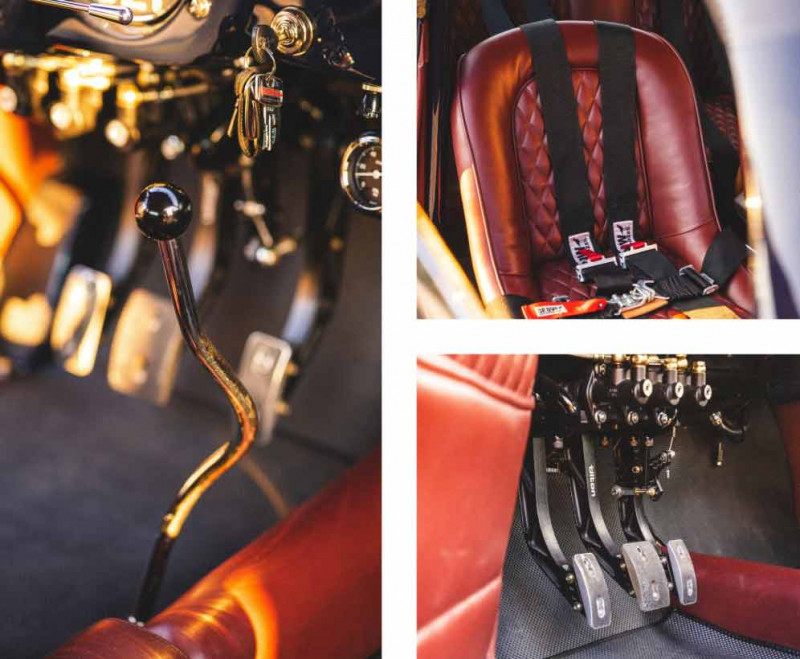 RIGHT: B20GT is widely recognized as the first true Gran Turismo and quickly acquired a following among racing drivers.

THE AURELIA GT WAS EMBRACED BY AFICIONADOS AND COMPETED IN SUCH LEGENDARY RACES AS THE MILLE MIGLIA AND TARGA FLORIO.

Power up x2 is an series car?