With a 760bhp supercharged V8, the GT500 is the most powerful production car ever built by Ford, and – no spoiler alert required – it’s a bit of a beast. Words by John Barker. Photography by Aston Parrott.

We can hear it coming for miles, the heavy V8 beat rising and falling as the car accelerates and brakes, getting closer. Any moment we expect it to appear around the corner closest to us and, confusingly, it doesn’t. The sound gets louder and louder and when the Mustang eventually bursts into view it assaults our eyes and ears simultaneously. 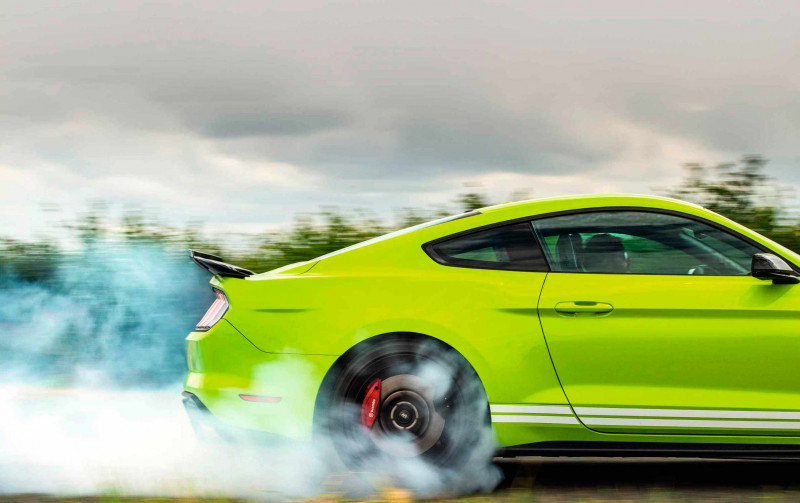 ‘A crazy, monumental last hurrah for the V8 Mustang’

The colour! The stripes! In the insect world this sort of colour scheme is a warning that shouts ‘stay away or I’ll leave a bad taste in your mouth!’ But as digital news editor Jordan Katsianis attests, when applied to a Mustang, it draws interest; as he headed up the M1 from London, every BMW M and Mercedes-AMG wanted to race him. Maybe it was the noise that attracted them, or maybe they knew exactly what they were looking at and, like moths to a flame, were drawn inexorably to it. This is the Mustang Shelby GT500, all 760bhp of it, which makes it not only the most powerful production Mustang that Ford has ever made but the most powerful Ford production car of all time, bar none. Forget the mid-engined GT; the accolade for peak piston power in a Ford Will most likely rest with the long-serving Mustang. Given the recent launch of the all-electric Mustang Mach-E, that feels right somehow. 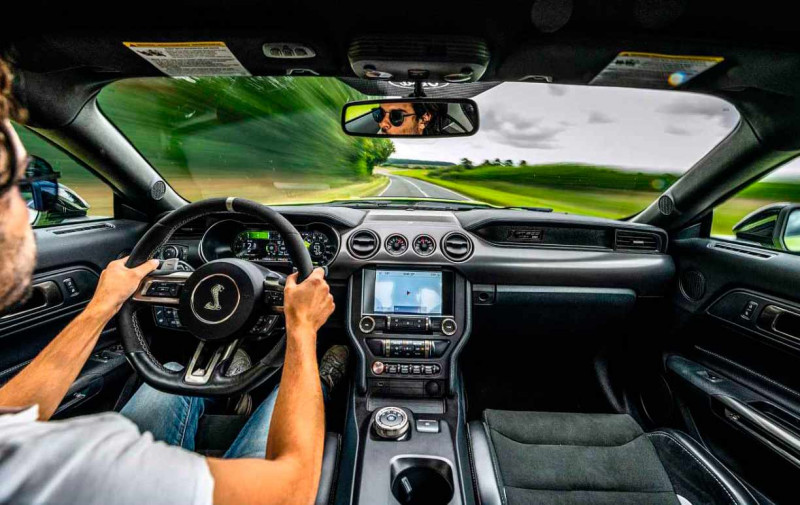 Big-power Mustangs are almost as old as the hills of course, but once the ringing in your ears has subsided and your eyes have adjusted to the ‘Grabber Lime’ paint, you can’t fail to notice that there’s a lot that’s special about this Mustang, that it’s a serious bit of kit. Mind, at $74k – double the price of the base V8 Mustang – you’ve every right to expect that.

This Shelby has a great stance, sitting wide and low, its arches crammed with wheels and tyres, rather like the Hot Wheels version of itself. Those front tyres are massively wide – 305 section, only a smidge slimmer than the 315 rears – and they’re bespoke Michelin Pilot Sport 4 Ss, too. Sitting in the shade of the front alloys are the most enormous Brembo brakes with six-pot calipers and plain discs of 420mm(16.5in) diameter. They’re the biggest ever fitted to a Ford road car, offering 40 per cent more surface area than the stock front discs, and it’s a similar story at the rear.

The redesigned front end features an acreage of honey combmesh and a deep splitter that can be optionally extended up the front arches with ‘splitter wickers’. On top of the bonnet is a large vented bulge to help pull hot air out, and at the rear there’s a boot spoiler with a prominent Gurney flap.

Pop the bonnet and, once you’ve finished gawping at the diameter of the intake pipe feeding air to the shiny, Roots-type supercharger squeezed into the cleavage of the V8, take a moment to admire the fine, crackle-finish, die-cast strut-brace. It’s a work of art, like an intricate footbridge from a model railway. At the front of the engine bay the ‘slampanel’ announces that it’s made from carbonfibre composite, as it was on the now-discontinued Shelby GT350.

The GT500 is based on the track-focused GT350 but it’s not simply a supercharged version. The GT350 was fitted with the wonderfully named ‘Voodoo’ 5.2-litre flat-plane-crank V8 that revved to over 8000rpmand sounded like a V8 Ferrari, whereas the GT500 uses the traditional and equally well-named ‘Predator’ 5.2-litre offset crank V8 and sounds like Armageddon with a melody. It’s full-blooded and bass-rich; classic American with a menacing edge.

The additional performance of the GT500 doesn’t come for free, and we’re not talking about the horsepower needed to drive the twin lobes of the 2.65-litre supercharger. The supercharger itself adds mass, there are additional coolers and Ford has also chosen to make the GT500 available only with the Tremec seven-speed dual-clutch gearbox, which altogether help push the mass to a US kerb weight of 2040kg. Given that, how the GT500 drives is even more remarkable.

It may be a traditional offset-crank V8 but the GT500 V8 is all aluminium-alloy, has four valves per cylinder and produces its stupendous 760bhp at a heady 7300rpm, so it’s no lazy lump. Callme old-fashioned but the smooth, four-pot-like sound of the GT350’s flat-plane-crank V8 just isn’t right, in the same way a rumbling V8 would sound wrong in a Ferrari. An American-muscle car needs the heavy-metal pulse of a traditional V8.

Sitting in the generous embrace of the deep-top-sided Recaro, you press the start button and ba-boom!, you’re at the epicentre of your very own thunderstorm. Amusingly, this is ‘normal’, the key-on exhaust setting, and it’s louder than the loudest setting of most cars. There is a ‘quiet’ setting and it’s remarkably, unsettlingly quiet – as if you’ve popped on a pair of noise cancelling headphones. I guess it’s for appeasing neighbours you want to stay friends with when you pop out for an early run on Sunday morning. And you will want to; you won’t be able to resist exercising this monumental Mustang, and you will need plenty of space and quiet roads. That’s roads that are quiet of traffic; they’ll be noisy when you get within a mile.

Despite its weight, the pace of the GT500 is phenomenal, and not just in a straight line. Happily, for a big car it feels properly handy. The steering wheel is a good size, the weighting is fine (there’s a choice of three settings) and the response keen, so you quickly feel comfortable with the dynamics, in charge, though a bit more detail in the steering would be welcome. And you need to feel comfortable and confident with such humungous power at your disposal. I tried the 720bhp Steeda Bullitt Mustang earlier in the year (evo 282) and, frustratingly, it never ran right on full throttle. Now I know what I was missing. Leave all the GT500’s electronic aids on, nail it from rest and it will expertly broker a truce for the conflict that breaks out at the rear axle, maximising the traction of the Michelins and the Torsen limited-slip diff and ensuring that the torque of the V8 doesn’t spill over into anymore than a slur of oversteer. On dry, warmasphalt, once the rear tyres have hooked up in first, the GT500 stays hooked up and hoons forward, pinning you to your seat, the dual-clutch ’box ensuring seamless shifts for a seemingly unrelenting lunge for the horizon. If you’ve picked a long enough bit of road you’ll soon be deep into three figures and, with the furious, determined V8 howl swirling around you, you’ll be wondering if the shove from the insane supercharged V8 will tail off noticeably before you hit the 180mph limiter.

The days of autos being slower than manuals are long gone, of course. The manual-equipped, 519bhp GT350 hits 60mph in just over 4sec while the GT500 can hit 60mph in just 3.3sec and nail the standing quarter-mile in just 10.7, with no skilled upshifting/clutch work required. We use the word ‘can’ because Ford says these figures are achievable on a prepared surface, i.e. the start-line of a drag strip or similar.

You’d probably expect that those numbers would also rely on the stickier Michelin Cup 2s that come as part of the optional, $10k ‘Carbon Fiber Handling Pack’. The pack also adds carbonfibre wheels, a carbon rear wing and adjustable front suspension top-mounts and deletes the rear seat (saving about 50kg in all). However, the standard PS4 Ss give similar traction, says Ford, the Cup 2s specced to give a significant uplift in lateral grip. The car here wears $10k of options but they are a pick ‘n’ mix: the tech pack, leather Recaros, the stripes and the base handling pack, which includes the top- mounts, Gurney flap and those splitter wickers. So, how good is the two-ton GT500 in the corners? Rather good. I’m pretty certain that, at a mere 60mph, the extra downforce provide by the sticky wickets is not a significant factor, but turn-in is undoubtedly sharpened by those wide front tyres. And as standard the GT500 comes with MagneRide adaptive damping, which has the bandwidth to smooth out your typical, busily surfaced UK B-road and also keep this Mustang nicely poised well into three figures.

Maximum torque, a staggering 625lb ft, is delivered at 5000rpmbut it’s amusingly obvious that a large proportion of this is available at not much more than tickover. Turn off the electronic traction and stability control and a little low-speed probing of the traction shows that the GT500 feels comfortable and smooth over-speeding the rear axle… and leaving a couple of black lines behind as you wind on opposite lock.

So, if you’re up for it, corner oversteer is available. Steering feel is nothing special, but the long throttle pedal is an advantage, allowing you to regulate the demand more easily and finely, so you get what you want. Just be aware this is two tons of car and, once it’s going, it’ll want to keep going, so choose your moments.

You don’t have to use big throttle openings to enjoy the GT500’s V8, of course. It sounds epic just ambling about, and even better if you use the paddles to make early upshifts with a loaded throttle, delivering glorious, lip-smacking changes. All-out there’s an initial trill of supercharger whine that is soon drowned by the V8’s howl, but on a moderate throttle you get more of it. To be honest, it wouldn’t seem out of place if the supercharger was screeching like the Mad Max Interceptor.

The GT500 won’t be sold by Ford in Europe but a few specialists are offering imports. There’s not a great deal that needs to be done to satisfy UK individual vehicle type approval, but you will end up sitting on the ‘wrong’ side as it will be left-hand drive only. One UK dealer is asking ‘from £120k’, which is a lot. The GT500 isn’t as sophisticated as the European opposition but as the lime paint and stripes show, Ford really doesn’t give a flying fig. In the US, its enormous performance, character and attitude will cost you a fraction less than an M4 Competition, which feels about right.

The GT500 is hugely likeable. It’s surprisingly habitable, dynamically more polished than you’d expect, disguising its mass impressively. It’s hard for it not to be all about the engine, though, and in the end it is. If you don’t like the sound of a lightly silenced V8, the GT500 isn’t for you. If you do, it’s among the finest ways engineers have yet devised to make the sound and fury of a Can Am racer’s V8 every-day useable in a four-seater. The GT500 is a crazy, monumental last hurrah for the V8 Mustang and we love it.

Left: Grabber Lime is inspired by a ’70s Mustang colour. Above: cabin is well equipped, and includes shapely Recaros, but GT500 can only be had in left-hand drive.