No other car encapsulates the craziness of Group B better than the 1985 S1 E2 Quattro. It wasn’t the most successful or the most technically outrageous. But with its wild spoilers, all-wheel drive and massive power outputs it would have seemed as otherworldly to a rally fan teleported 10 years into the future from 1975 as zero-emissions cars like the Rimac Nevera and E-Legend EL1 would have seemed to us at the launch of the Nissan Leaf a decade ago. 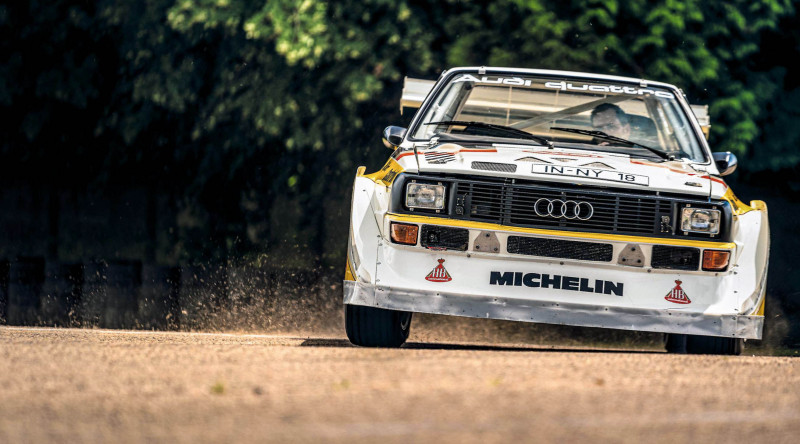 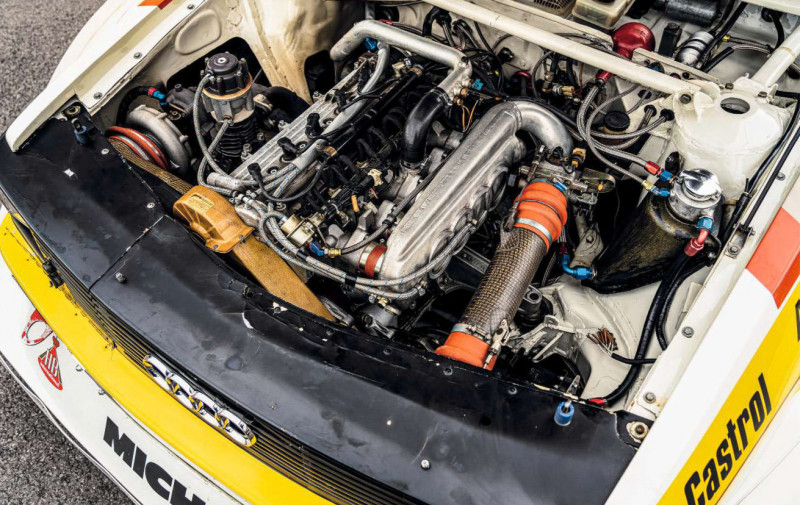 And right now, with the throttle pinned hard, the tacho at 6000rpm and the entire car violently snaking up what had looked three seconds ago like a straight road, I can confirm that it’s every bit as insane to drive as you’d imagine.

Most of us are familiar with the birth of Quattro legend. How, in the late ’70s, Audi saw potential in Volkswagen’s Iltis off-roader and applied its four-wheel-drive technology to a new coupe based on the 80 saloon. In its first official outing at the Jänner Rallye in Austria, a Quattro finished 20 minutes ahead of its nearest rival. By the end of the 1982 season Audi had bagged both the drivers’ and manufacturers’ championships. What rally fans couldn’t know is how radically different the original road car-based Group 4 Quattros would have to become to stay relevant in the face of specialised Group B machinery.

Rather than develop a bespoke rally car from a clean sheet of paper as many of the other car makers had, Audi used the looser Group B regs to radically re-model the Quattro, offering 200 Sport Quattro road cars for sale to the public, as per FIA rules. From inside one of those 200, there’s little initially to mark it out from a regular Quattro. The most obvious change is the upright windscreen, pinched from the 80 saloon to cut reflections. But turn around and clock the non-existent back seat space, or turn the wheel and carve into an apex, and the even bigger change becomes apparent. Audi’s engineers chopped a huge 360mm from the wheelbase to enhance agility and kill the dreaded understeer, and now almost every panel bar the doors was made from Kevlar or fibreglass. 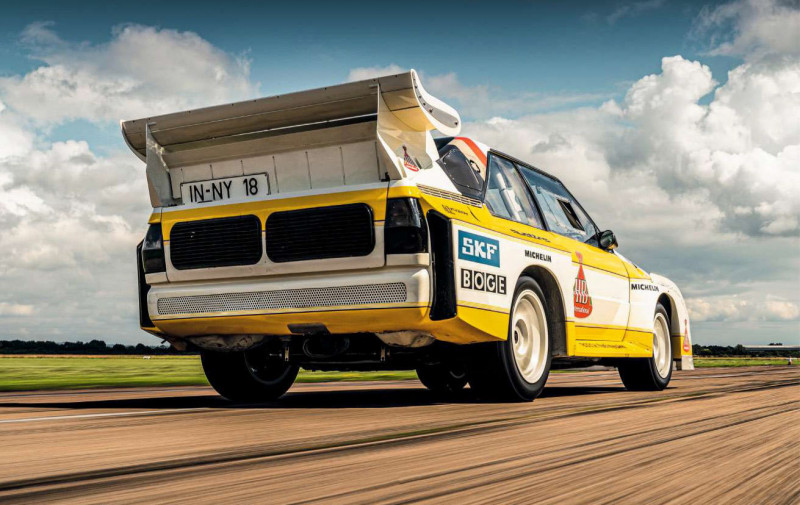 Compared to an ordinary long-wheelbase Quattro I drove a few months ago this lighter, shorter version feels noticeably more nimble, and vastly quicker. A new 20-valve five-cylinder engine made 302bhp, a more than 50 per cent increase on stock. Zero to 62mph took 4.8 seconds and it could crack 100mph in less than 13. Back in ’85 only something like a well-driven Countach was quicker, and even today, 36 years later, it still feels impressively energetic when the boost arrives in third gear, leaving your mind to wonder what it must it have felt like to pilot one of the real WRC versions with up to twice as much power and hundreds of kilos less ballast…

The answer, you probably won’t be surprised to learn, is it’s terrifying and thrilling at the same. The rally car we’re driving today is the ex-works Quattro piloted by Walter Röhrl at both the Semperit Rally and on the RAC, where he managed to roll it, causing extensive damage. Head over to YouTube and you’ll find archive footage of it getting airborne on Rally Finland with Stig Blomqvist at the wheel.

Never mind getting airborne, just getting going is tricky enough thanks to the tight differentials and snappy clutch. A now redundant white switch on the top of the gearlever once operated an automated clutch, allowing the driver to change gear while left-foot braking, leaving their right foot free to keep the turbo spinning. 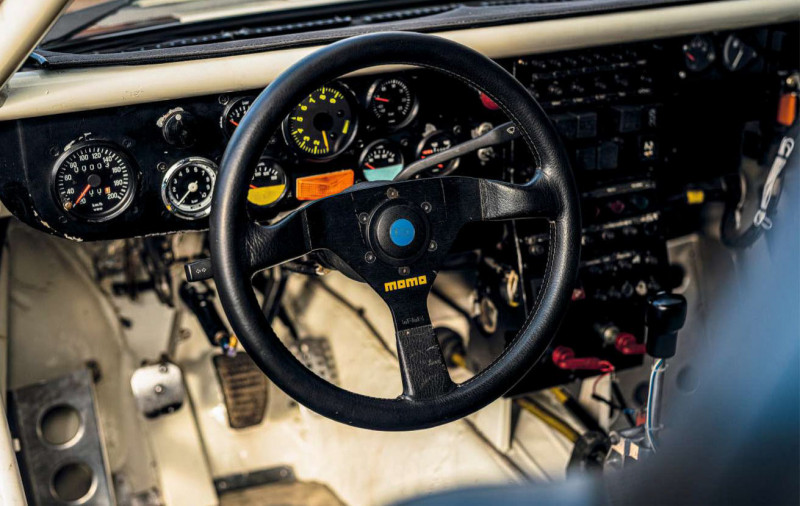 The engine fires easily, idles happily, and that gearshift is surprisingly light, and much more positive than the road car’s sloppy equivalent. Scanning the cabin with its dozens of gauges, I notice the spindly column stalks and hazard warning light switch look just like ones from the 1.0-litre Mk2 Polo I learned to drive in.

The low-rev performance is similar, too. But get that rev-counter past 5000rpm and everything starts to get very blurry. It seems incredible that this car has been detuned to ‘only’ 450bhp from its 590bhp racing trim, because nothing else I’ve driven – not 800bhp Skylines, not 1500bhp supercars – comes on boost with this kind of ferocity.

And even having experienced it half a dozen times, even steeling yourself for that kick, even having memorised exactly where on the rev-counter’s sweep it’ll make its appearance and tensing your wrists 100rpm earlier to try to keep the steering wheel vaguely straight, it still knocks the wind clean out of you and sends the front axle violently left and right.

Wait until you think you need a slug of acceleration as you kiss an apex and you’re already too late. Try giving it a bootful way before the corner, and the meatily weighted assisted steering lightens as the 30-year-old front tyres slide wide. Walter Röhrl has said of the S1 that it was car in which you had to think two corners ahead. It feels like a weapons-grade machine designed to cover ground as quickly as possible with little worry about how that happens. You’d need more time, more commitment and more talent than I could offer to do it justice, to really get it to move around and neutralise the lag and understeer. While Röhrl adapted to the short-wheelbase form, Blomqvist was less bothered about understeer than what he saw as the short version’s instability.

As I climb out after just a few minutes, both physically and mentally exhausted, I can’t help wondering how on earth Audi’s team drivers wrestled these machines through dangerous scenery for days on end. Despite Audi’s best efforts, and those of the men and women at the wheel of the Quattro S1 and E2, the original four-wheel-drive rally giant’s abilities were dwarfed by those of its Peugeot rival. The mid-engined four-wheel-drive 205 T16 scored wins in seven of the 12 rounds to take the 1985 championship, versus a solitary win at San Remo for the Quattro. And things weren’t going to get easier for 1986, because Lancia now had its own mid-engined, four-wheel-drive missile, the Delta S4.

In the end, it didn’t matter. Following a horrific crash in which three spectators were killed at Rally Portugal, and Lancia driver Henri Toivonen and co-driver Sergio Cresto’s death in Corsica, the FIA announced that Group B wouldn’t be returning in 1987. Audi pulled out immediately. But that wasn’t the end of the Sport Quattro story. Some of the cars competed in rallycross, and in 1987 Röhrl smashed the Pikes Peak hillclimb record, becoming the first man to go below 11 minutes thanks to balls of steel, a turbocharged five officially developing 600bhp (but rumoured to be 750bhp), and the craziest wings this side of an air show.

The Colorado mountain wasn’t paved in those days, and the original Quattros were always better on gravel than sealed surfaces. But Audi would go on to employ four-wheel-drive technology to great effect on traditional race circuits in IMSA racing in the US, in the BTCC, Germany’s DTM series, at Le Mans, and of course on road cars. For many of us though, the Sport Quattro is the Quattro. Wouldn’t it be great if someone built a new one…?

Audi chopped 320mm from the wheelbase to boost agility. Bodywork is mostly Kevlar and plastic. Car weighs around 1090kg, the same as a Panda…

Drivers complained about screen reflections on the original Quattro, so the S1 got the more upright windscreen from the humble Audi 80.

Five-cylinder, 2.1-litre engine has 20 valves and develops nearly 600bhp in race tune. Lag is significant, as is the kick when the power finally arrives.

Early Quattros understeered so the rad, oil cooler, power steering pump and alternator were all relocated to the boot, lightening the nose and helping it turn.

Some cars, including this one in a former life, were fitted with an early six-speed Porsche PDK dual-clutch transmission. Quicker shifts help keep the revs up. 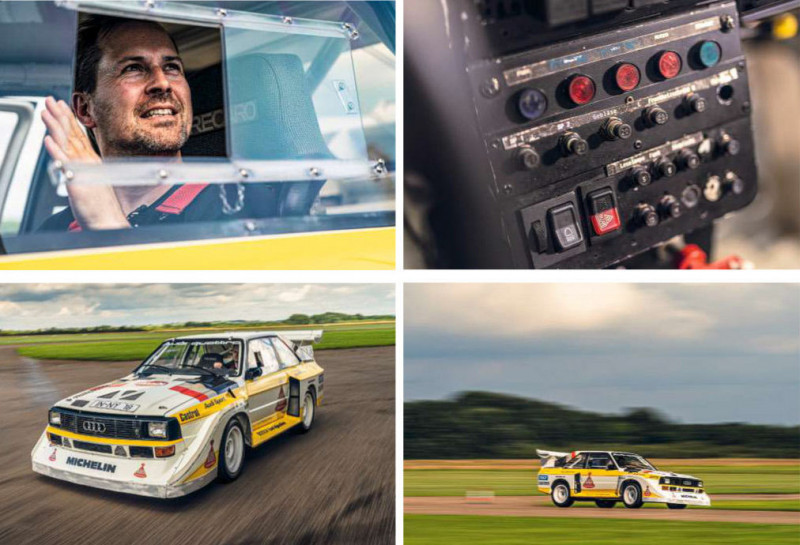 The expression of a man thinking two corners ahead. Nothing’s for show, but note four rings cast on inlet manifold. Note the angle of the tacho, putting the fun stuff at the top. What’s lighter than a plastic window? One with a hole in it. The polar opposite of a touchscreen.

THE CAR WE’RE DRIVING WAS PILOTED BY STIG BLOMQVIST AND WALTER RÖHRL, WHO ROLLED IT

Need a man who can drive a Group B car properly, be funny, and know why the Quattro matters? Call Chris Chilton.