Commissioned by the Sultan of Brunei for use around his residence in Berkshire, this 140-series CL is badged as a ‘700’, which is unusual for an AMG. And it wasn’t simply a case of gluing on an extra zero – it’s registered as such with Mercedes’ database, and has the documentation to back it up. Another right-hand drive CL with this V12 engine, badged as a ‘CL70’, is supposed to have been produced and brought to the UK, but its current whereabouts are unknown. 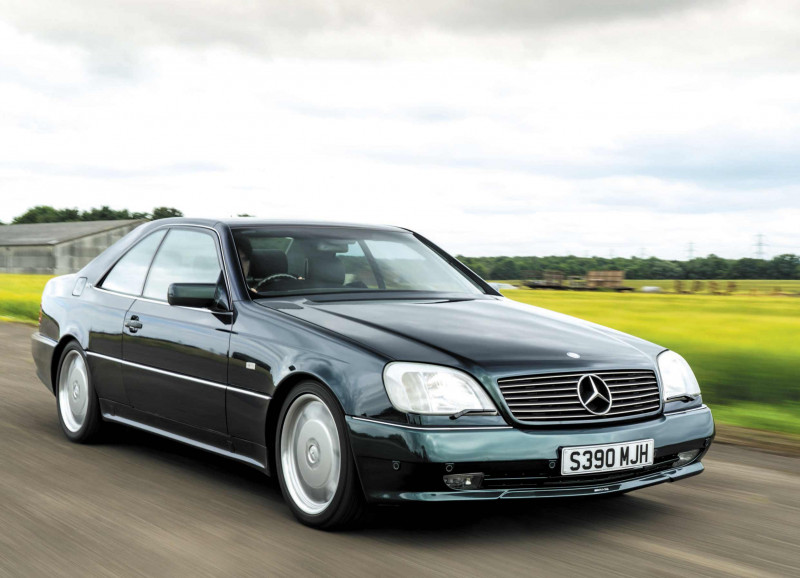 As for the engine itself, the M120 V12 is one of the finest engines produced not just in terms of Mercedes, but for the industry as a whole. Development started in 1988 in response to BMW launching its own V12 and the quad-cam motor was launched in 1991 in the 140-series 600SE/SEL before powering the 140-series 600SEC (later badged S600 Coupe and then CL600) and the R129 600SL the following year.

It keeps a strong, iron-clad stance on the road

Output was initially 402bhp in the S-Class Saloon, though thanks to emission regulations this was reduced to 389bhp. AMG strongly approved of this engine: 7.0, 7.2 and 7.3 variants were produced on special order for the 140- and 129-series. In modified form, this engine saw use in the CLK-GTR road car and featured in various Pagani Zondas built from 1999 to 2019 thanks to Fangio putting Pagani in touch with AMG. So, a long and illustrious history, no doubt about that. The M120 V12 even saw service in the experimental Mercedes-Benz C112 of 1991. 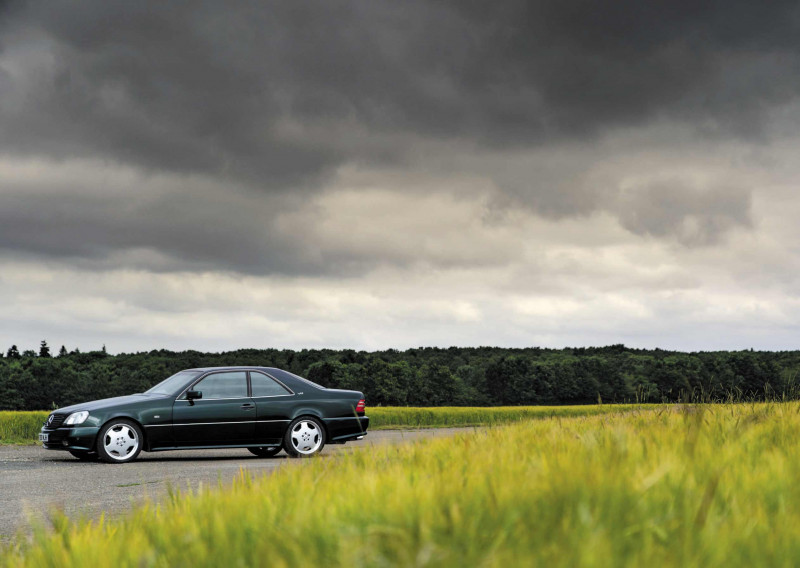 Offered for sale by Aylesbury-based specialist Edward Hall for £89,995, this 1998 CL700 C140 has undergone a serious mechanical overhaul to bring it back to best, with certain AMG-specific parts specially made for the restoration. The front springs were completely unobtainable and one had indeed cracked. The brakes were also a headache to sort out: Mercedes could provide the pads, but not the discs, which were made by SHW in Germany for AMG. This, however, prompted a request for 45,000 to start a production run, which was understandably declined, so the old discs were used as templates and have been retained for future reference. Even the air filters from HWA are special order.

But none of this is really an inconvenience. It’s not the kind of car you’re going to take out very often, so renewing these items again is not going to happen for some time yet. To ensure a reliable and enjoyable future for this masterpiece of an engine, a top end rebuild has been carried out: valve guides and ignition components were renewed, along with new head gaskets. Once again, these are AMG specific and were made by Elring. Unfortunately, the manufacturer patterns had been lost, so the old ones were sent to Elring for use as templates. 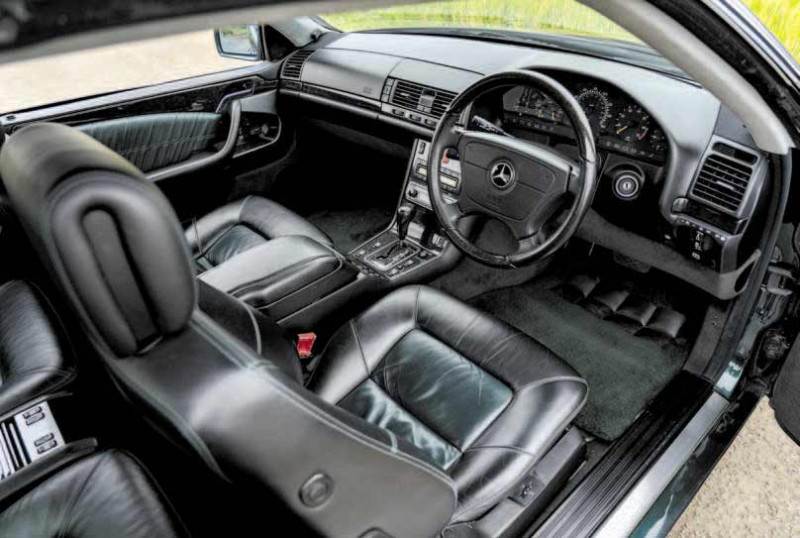 When seeing this car for the first time, what first grabs your attention is its party piece designo LCP paint, morphing from blue to green. It suits the substantial nature of the CL with its deep, rich lustre. This paint has clearly had much thought and consideration: it looks genuinely expensive and exotic, any temptation to add more colours and extra fleck resisted. It’s the paint equivalent of the most expensive fine wines, in this case perfectly matched with the dish. The AMG bodykit is not overbearing, projecting a mature, handsome image. No huge intakes or carbon fibre additions are to be found here, a refreshing change from the AMGs of today. It’s enough to give a more purposeful and sporting stance without losing the presence and sophistication the standard car has in plentiful supply. A pair of perfectly placed V12 badges behind both rear side windows subtly lets onlookers know what’s under the bonnet.

On opening the grand coupe doors, you are invited into a designo interior featuring green and anthracite nappa leather, bird’s eye maple wood trim, green stitching and plush, green lambswool carpets to round off the look. On paper, the interior seems a bit of a colour clash, but works very well. Surprisingly though, the wood trim is not from designo, but a standard offering. One can only speculate how it would have looked with one of the garish ‘Magic Eyes’ trims available at the time. At any rate, it’s a better fit here than the usual brown walnut.

The long doors shut with an aristocratic sophistication thanks to their weight and the soft closing, and the double-glazed windows ensure a very quiet cabin indeed. As per Mercedes coupe tradition, your seat belt is handed to you as you get comfy in the generously proportioned nappa leather seat – electrically adjustable and heated, of course. Only the V12 badge on the gearshift lets you know something’s a bit different. Unusually, there are no AMG badges or equipment to be found inside. 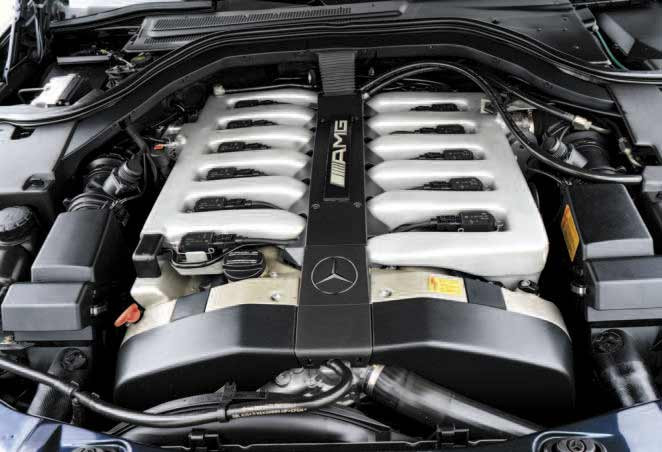 It does unexpectedly feel rather modern in here. Features such as the electric headrests, the glass sunroof, not to mention the sheer refinement and silence give the latest Mercedes, with their complex driver assistance systems and touchscreen consoles, a run for their money. It’s old school build quality with modern refinement, surely an unbeatable combination. The mileage is promising too, sitting at just shy of 64,000. So what’s such a car like on the road?

Many a classic Mercedes feel special and superior to other cars, but this one makes all others seem puny. Taking the hewn-from-granite quality the 140-series is renowned for and combining it with monstrous torque from the naturally aspirated seven-litre AMG V12 means this car does not merely cover distances, but crushes them. Its power is estimated at just under 500bhp, which makes it substantially more powerful than most supercars of the time, and if you wanted the extra guarantee of winning a drag race, AMG could offer you the 7.3-litre version, with around 525bhp.

As for fuel economy, the CL700 has never heard of such a thing. Feasting on petrol, the standard economy gauge comes across as rather pointless, as it has difficulty improving on 15mpg and swings into the realm of single figures following a prod of the throttle pedal. The German sense of humour, perhaps?

As for the AMG suspension, bumps and road imperfections are subdued, though in a harder, more aggressive manner than you’d expect. It keeps a strong, iron-clad stance on the road, though in the corners you are reminded of its sheer size and weight. The CL is surprisingly swift, but a little cumbersome. Those uprated AMG uprated brakes with an early Brake Assist (BAS) are very powerful indeed, though require a strong shove. Such heavy feeling brakes and steering are reassuring and frankly, necessary here. On busier, narrower roads where you can’t see too far ahead, it’s a matter of planning your next move and taming that iron beast of torque. Is there another car within a mile of you? Is there even enough road? More generously proportioned tarmac is where this car is at home and is the ideal setting to unleash the ferocity within: kickdown is more like an entry point into hyperspace, the twin-pipe AMG exhaust letting out a primeval roar across the land. The CL700 AMG is a Teutonic, savage machine.

What makes this car particularly remarkable is that although there are a handful of other Mercedes with this engine, and the designo options seen here were available to order for other models too, for all that to come together in one car with effectively its own special model designation is unrepeatable. Many classics become unique because of a combination of depleting numbers, interesting histories, spec changes, or even simply a lack of mileage and extreme cosseting in a garage. However, this CL was unique from production and such cars come along once in a blue moon.

Headrest and window controls found in the rear. AMG springs do well to hide some of the CL’s weight. The AMG V12 is said to have almost 500bhp.