VR6-Swapped more-door 1983 Volkswagen Golf Mk1 Could this be the ultimate 190bhp Mk1 sleeper?

Us petrolheads are a numbers obsessed bunch. Often it starts in childhood, memorising the performance figures in brochures and magazines of our favourite models. Some of us have been around the scene so long that we talk in a language of chassis and engine codes, measurements, ETs and diameters. Most car tribes typically favour certain variants. “Two doors too many” is a phrase we’ve heard being used about Golfs, yanks, old Fords…you name it, there exists a more door snobbery that probably dates back to favoured hot rod shells. Are we collectively missing a trick though? If this Mk1 is anything to go by, we would happily bet that many of you will be hitting the classifieds after reading this with renewed gusto for the less obvious, more practical five-door model. 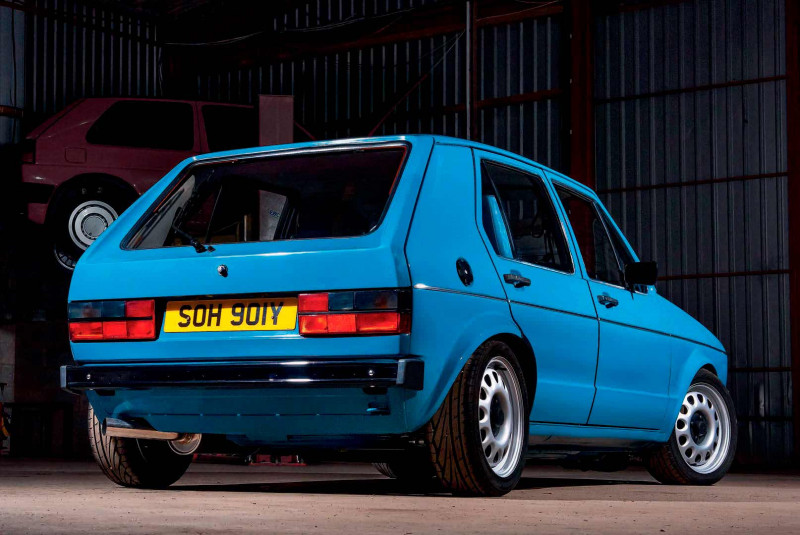 Tired from an early start and a round trip to the Retro Rides Gathering at Shelsley Walsh, 34-year old Midlander, Dave Bennet was good enough to spare his Sunday evening and touch base with PVW to explain how this stunning hatch came to fruition: ”Back in the pre-Instagram era I came across a Pargas blue Mk1 Jetta on Google Images which just looked amazing. It sowed a seed and was placed on the ‘someday’ list of project cars in my mind. Fast forward to Christmas Day 2018, I was in the sleepy gap in proceedings somewhere between the Queen’s Speech and tea when I saw this five-door Golf on eBay. I wondered if I could make a Golf version of the Pargas car”.

A cheeky offer and a bit of liaison resulted in the 1983 Golf CL leaving its previous Hereford home and being delivered to Dave’s native Wolverhampton before the cold meats had been served up on Boxing Day. 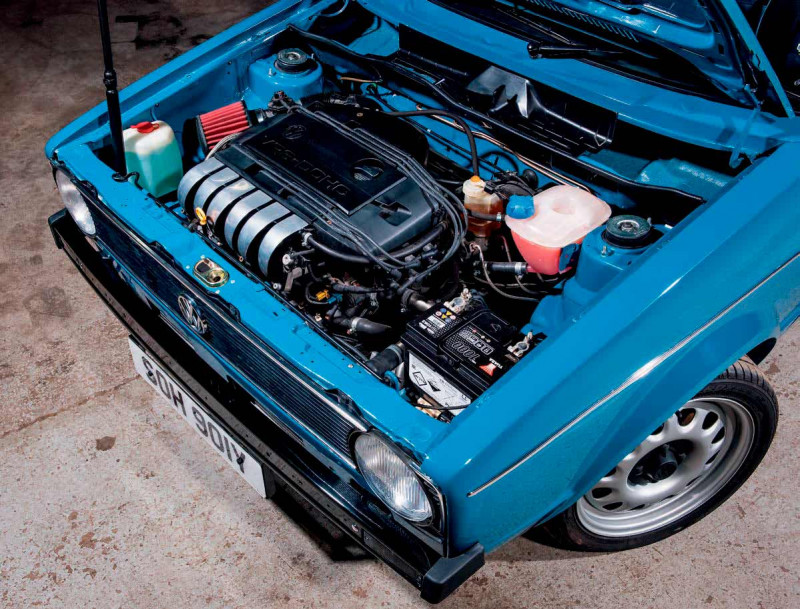 Dave initially bought the car as his personal project but he explained that over time it has become the company demonstrator for the Bridgnorth based specialist, Retro Barn Motor Co that he co-owns with business partner, Martin Williams. The pair opened the doors to their partnership back in 2018. Both Dave and Martin have an impressive breadth of automotive experience and met whilst working at the high-end renowned Classic Motor Cars (CMC) restoration specialist. Dave explained that he thoroughly enjoyed his time there and the experience of working routinely on classics such as E-Type and XK120 Jaguars was a positive one. “I once prepared a one-off Pininfarina XK120 for Pebble Beach which scored very highly which is a good indication of the level of work we were doing at CMC.

The thing is with restorations of that level is that they are either right or wrong. Me and Martin wanted to bring our exacting standards to the world of modified cars which we both had an interest in outside of the previous day job. A lot of people in the modified arena talk a good job but we wanted to bring our high standards and attention to detail into this world”. The pair seemed to have made an informed decision and the demand for Retro Barn Motor Co’s expertise has flourished. They tackle anything from servicing, fabrication to complete bespoke custom and modified builds.

Dave has petrol in his veins and restored his first car (a classic Mini) at the tender age of sixteen with the help of his dad. At nineteen Dave was gifted a Mk1 Caddy from a mate which started his love affair with all things Wolfsburg. Numerous modified Mk1 Caddies, MK1 Golfs, a bike carbed Mk2 Driver, a long nose T4 and a 1500 Super Deluxe Beetle have graced his drive punctuated with a short period with a Mk2 Ford Capri and a further classic Mini. Dave’s current eclectic fleet includes Mk1 Caddy, a 2K Caddy, a ’68 Mini Cooper and a ‘67 Ford F100 long bed truck. 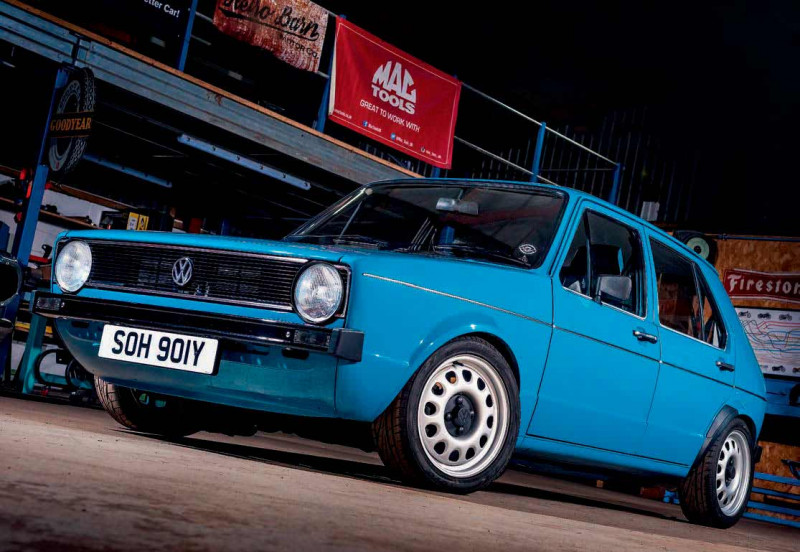 Dave wasted no time breaking the car down to see the true extent of work it would need. Inner arches, chassis rails, front panel and spare wheel well all needed attention from the welding torch. A fresh coat of the all-important hue was applied whilst the spec of the rest of the car was contemplated. “I realise that the VR6 swap in Mk1s is not to everybody’s taste but I love it. My mate had a Mk3 Golf VR6 back in the day. I went out in it when I was just 22 and it blew my mind. It was the first properly quick car I drove and I’ve wanted a VR powered car ever since so when a suitable Mk3 donor car came up, I pounced on it”. A 02A transmission with a 02J shifter backs up the six-pot handsomely. Dave fabricated his own manifold and exhaust, fuel lines, brake lines, and coolant pipes. “I really enjoy fabrication and the exhaust is my favourite part of the build because A; I made it and B; it sounds ace!” An AEM induction kit further amplifies the unmistakable soundtrack whilst Epytec engine mounts hold the over-sized lump safely in place. A Radtec aluminium radiator with twin Spal fans keeps things cool.

Stance+ coilovers ensure the car handles nicely and achieves a purposeful stance over the utilitarian but cool Toyo Proxes wrapped G60 steels whilst Mk3 Vauxhall Cavalier SRI front discs and Mk3 Golf VR6 rear discs complete an effective brake package. The interior sports a retrimmed rear bench and matching Porsche 924 electric front seats. Blue Harris Tweed centres contrast classily with black leather bolsters. Dave explained that he ordered one roll of the must-have Scottish material but was only supplied with one of the en vogue white branded tags. He wanted one for each of the front pews. A bit of lateral thinking resulted in a trip to Tesco where he purchased a pair of their winter slippers and carefully unpicked one of the labels. Problem solved.

Rightly so, Retro Barn Motor Co are proud of the finished result and intend to put some miles on it and show off the fruits of Dave and Martin’s collective labour. Air ride is on the cards in the not too distant future and maybe another engine swap in time. With a Mk1 Caddy waiting in the wings too, somehow we feel that this won’t be the last we hear from the talented duo. Fingers crossed, hey?

Back to that number game where we started, we’ll leave the final few words to Dave “This five-door Golf is the perfect car for a guy with a family. Fast, stylish and fun with room for the kids”. Now, that’s a two penneth we can get on board with.

«When a suitable Mk3 Golf VR6 donor car came up, I pounced on it»