South African Alfasuds — GTA and Giardinetta rarities driven. The Alfasud was famously named after its southern Italian factory. But an even more southerly Alfa outpost in South Africa made some real oddities – like this ultra-rare GTA and Giardinetta pairing. Story by Richard Aucock. Photography by Michael Ward.

Did you know there was an Alfasud GTA? Or a lifestyle-focused estate called the Giardinetta? Today, these would be highmargin halo models in a car range, premium-priced to bring in the big bucks. Decades ago, however, things were very different. That’s why these two Alfasud derivatives are so rare and little-known. 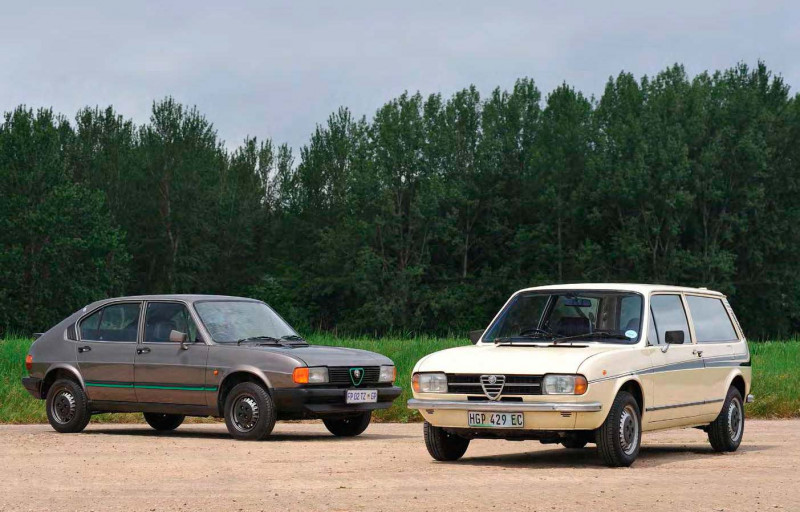 Car company marketing people: this is how things were done, how opportunities were missed, before you truly started wielding your power.

I’d spotted the Alfasud GTA on the classic car sales website, Car & Classic, and I admit that it was the ‘GTA’ badge that first excited me, with the Giardinetta on the same website being just a nice added extra. I was wrong – I’d soon find out how brilliant both cars are.

Owner Joubert van Zyl introduces me to the unknown ’Sud with the hallowed GTA badge. He imports classics from his home country, South Africa, to supply enthusiastic Brits with rust-free and generally immaculate Alfas. The GTA was a real find, even for him, and he immediately started researching it when he was offered it for purchase. 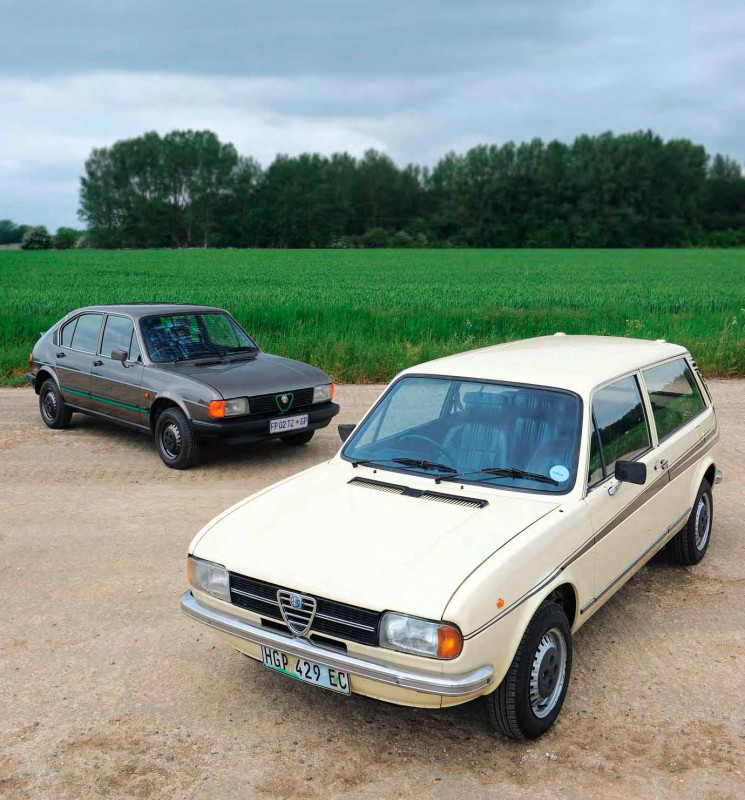 “The GTA was a South African special,” Joubert explains as, with the help of his charming parents, he cleans the car ready for our photoshoot. “They used these 200 or so GTAs to test the more powerful 105hp 1.5-litre boxer engine, which was destined for the new Alfa 33. They are super-rare, even in South Africa.”

Built between 1981 and 1983, the Alfasud GTA wasn’t quite the road racer or homologation special those three letters flattered to make you believe – even if it did, in a way, help with homologation, albeit for a road car. “The obvious addition is this huge rear wing,” says Joubert. It really is enormous, and made from that spongy, rubbery plastic so popular in the 1980s. The top is broad and sits flat, to serve as the perfect picnic table. Below this is the fabled GTA badge, alongside a cloverleaf logo, and while this car is dark grey, Joubert says white was also available. They all had green stripes on the doors and green polka-dot upholstery inside.

Taking the opportunity to jump in, I settle comfortably into the hip-hugging seats, complete with plentiful under-thigh bolstering, and clock details such as the Raid Turbo leather steering wheel. Its small diameter and thick leather rim feel so very ‘1980s’, with metal spokes where today you’d find an airbag. Passive safety was one for the future. 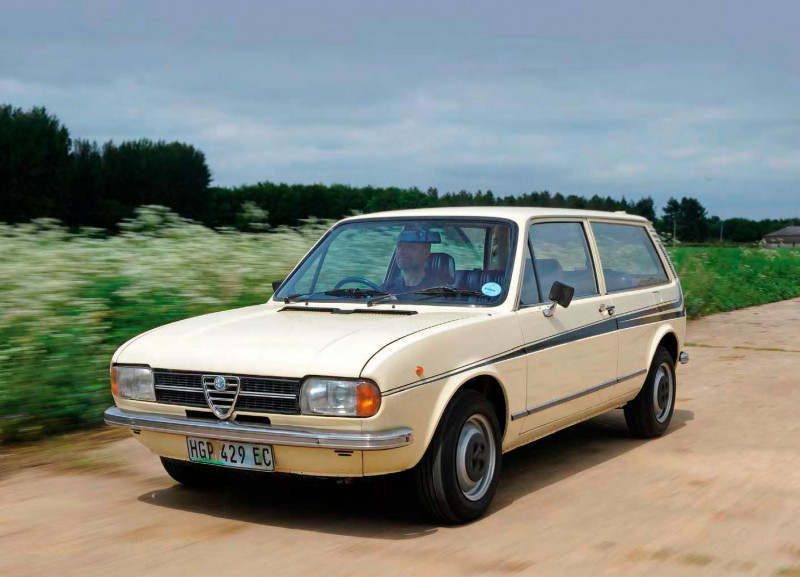 “They’re great cars,” said dad Wilhelm. “Great to drive, and they handle magically. I’ve got a real soft spot for them.” He knows a good driver’s car, too: Wilhelm van Zyl is a former racer, competing in South Africa’s Group 1 series in the 1980s, plus numerous endurance events – including the Kyalami 9 Hours. He raced Alfas, of course: Giulia Super, Berlina and multiple GTVs, including an RSA-special 3.0 V6. This passion clearly runs in the family.

Joubert had been a man on a mission. Leaving the GTA spick and span, he has been perfecting the Giardinetta before we depart for the photo location. It’s a delightfully curious thing. First launched in 1975 in left-hand-drive only, the Giardinetta is a three-door estate focused purely on practicality. Sporting an obvious likeness to the Austin Allegro Estate, it has enormously long rectangular rear windows, a near-vertical tailgate (with a handle seemingly pop-riveted on below the unmissable Alfa Romeo badge) and a delightful lack of pretension. Even the oddball side stripes, so charmingly of their time, look brilliant.

Despite those stripes and the seemingly 1970s colour, don’t be fooled. This car was actually built in 1983 – and unlike Italian-made Giardinettas, it’s right-hand drive. Joubert explains. “It was a rarity even in its home Italian market, but even rarer in right-hand drive form from South Africa. To save on tax and import duties, they were built up from kits between 1982 and 1984, and it is believed that fewer than 200 were made. I’d wager it’s one of the rarest production Alfa Romeos in the world.”

Inside, it intrigues further. Despite being a 1983 car, it still uses the original Mk1 ’Sud dashboard. To match the vinyl seats and pared-back door trims, the instruments don’t include a rev counter or even a water temperature gauge, while the rest of the interior is suitably parsimonious. How bizarre, then, to find it has a five-speed gearbox – and not only that, it’s fitted with a 1.5-litre engine with power not far shy of the GTA. A real curio.

A virtual coin-flip sees me take the Giardinetta to the photoshoot, following Joubert in the GTA. The boxer four starts on the button and, rather than requiring any choke, just needs the occasional throttle-tickle to keep it idling smoothly. The gearchange is fingertip-precise, super-light and tactile, while the steering transforms from muscular to light and incisive as my speed rises.

Right away, this little wagon feels like a thoroughbred. The engine is a charm. So sweet, smooth and quiet, it’s also impressively willing. With a bit more heat through it, I can press on at a surprising pace, encouraged by the clarity of feedback you rarely find even in the most acclaimed of cars. To think this was pitched as a working hack when new; a tradesman back then would be getting the most mesmerising tool to do his job. I imagine all the overtime work I’d willingly have done.

I’m full of enthusiasm when we get to the photo location. This is such a well-engineered and willing car, I tell Joubert breathlessly. “Pretty good, huh?

You’d never believe it from looking at it. That’s why I think it’s such a cool car.” He’s right.

As the Giardinetta is an estate, I decide to do the practicality test. Twist a rotary lever to flip forward the front seat and climb into the rear. Despite its diminutive footprint, it’s pretty good back here. The deep seat is comfortable, and there’s ample space even for lanky legs. An armrest is hollowed out in each rear side trim panel (don’t think about side impacts), while the huge side glass gives an almost panoramic view out. It’s a really nice place to be.

The boot floor is low, square and well-shaped too. It’s all lined in work-proof rubber, which normally lined the rest of the cabin too; this car’s been fitted out in carpet as an aftermarket addition, as Joubert explains: “They claimed at the time it could all be easily hosed out. Many people did: that might explain why there are so few survivors today.”

Sitting spick and span alongside, the GTA is another happy survivor. This car has clearly enjoyed an easygoing and completely rust-free life. It’s particularly resplendent thanks to a recent respray, while Joubert explains that the seats are so smart because they’ve been reupholstered in the original trim, sourced from Italy. There’s enough left over to do the door cards too. I do like the Mk2 Alfasud dash, with its more modern appearance, even if some of the switchgear remains idiosyncratic. I’m itching to have a go and finally we get the green light. Joubert hops in alongside me, not to slow me down, I soon discover, but to encourage me to stretch the car’s legs fully.

The engine has a clear extra slice of potency. It’s wonderfully raspy and charismatic, with particular enthusiasm as the revs rise up to and beyond 3000- 4000rpm (yes, this car has a rev counter so I can report on such details). It’s a clean, carb-fed delight, and the inherently perfect balance of the boxer four applies to the chassis, too. It’s just so flat, stable and confident, with an abundance of delicacy and tactility.

It’s no exaggeration to say that, straight from the off, the naturally ‘right’ feel imbues me with confidence, aided by steering that tracks fantastically straight and pure. Positioning the GTA is child’s play, so well telegraphed are the sensations and so excellent is the engineering.

The ride is never harsh, and the steering remains surprisingly manageable despite the much smaller wheel. It weights up in corners, but again the load-up is natural, and feels very organic. If there’s a weak spot by modern standards, it’s the brakes. That’s to be expected when driving period cars – although the amount of feel and progression here would embarrass a modern car.

“It’s tragic,” opines Joubert: “These cars are so wonderful to drive, but rust has claimed so many of them. When you drive one, it almost makes you weep.” Is the GTA fantastically different to something like a regular ’Sud Ti? Frankly, no. They’re mechanically near-identical. The appeal here is the sheer curio factor, the chance to own a genuine Alfasud GTA with all the bragging rights that affords. For this reason alone, I think it’s hugely desirable. That you would also get to enjoy such an unsullied, time-warp car only adds to the appeal. Definitely one for real Alfa Romeo aficionados.

And the Giardinetta? It’s equally rare and equally charming. I admit, it completely surprised me and I ended up falling in love with it. An unlikely-looking drivers’ car, it’s an undercover gem, something that won’t be everyone’s cup of tea to look at, but a faithful and fantastic car to drive.

I’d have it like a shot, again just for the curio factor, safe in the knowledge I’d also own something that is nicer and more rewarding to drive than many more conventionally pretty classics costing 10 times as much. Very much the sort of car we at Auto Italia like to champion.

Photoshoot wrapped up, Joubert drives me back to base in the Giardinetta to pick up my modern, mundane motor, and take me back to reality. It was a brilliantly spirited, flat-out blast. Like his dad, Joubert’s a former racer, and his experience is obvious: the car seems to come truly alive underneath us, barrelling from corner to corner with delightful finesse. It must, I wager, be quite the sight for onlookers, seeing such an unusual-looking car being driven with such commitment, two blokes on board beaming broadly.

They’re still out there, the Italian car surprises. As the Alfasud celebrates its 50th year, here are two more curios uncovered from the archives, giving us another chance to confirm just what a special car the Alfasud remains. You may not have known about the GTA, or the right-hand-drive Giardinetta, but we all know what a sublime people’s car the Alfasud is. Further proof isn’t needed… but how satisfying to find it anyway.

Many thanks to Joubert and Wilhelm van Zyl, Car & Classic and Elan PR for all their assistance with this feature.

105hp GTA feels like a Ti to drive. Super-rare RHD Giardinetta is a real charmer in every respect