With the help of his friends, classic Ford fan James Walden has put together a YB turbo-powered Mk2 Capri with a show car finish…Words Simon Holmes. Photos Adrian Brannan.

It’s nice to set yourself a challenge with a new project car, especially if it’s a little outside your regular comfort zone. But with a few good friends around to lend a helping hand anything is possible, as James Walden and his fine Mk2 Capri proves. Well-known within classic Ford circles and a regular at Santa Pod, it’s fair to say James is usually found behind the wheel of something with more function over form. For example, his Mk3 Capri racer is famed for the turbo mounted through the bonnet, as well as its monster burnouts. 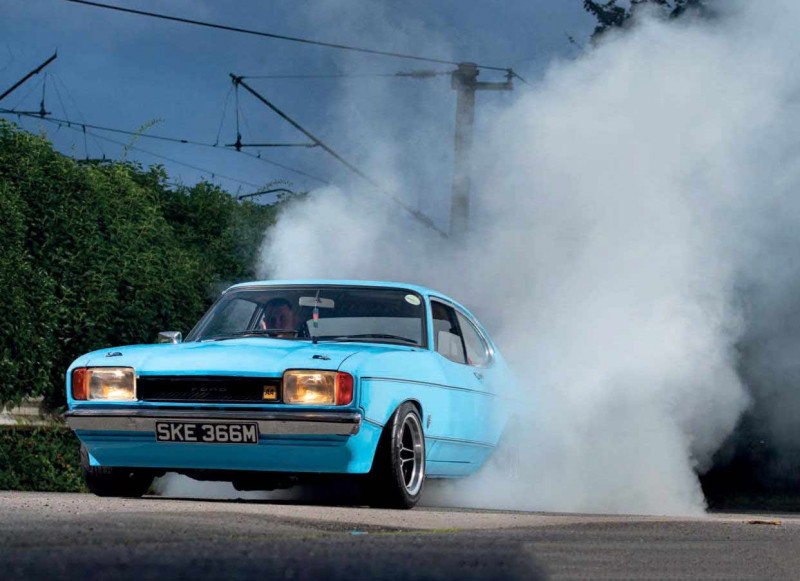 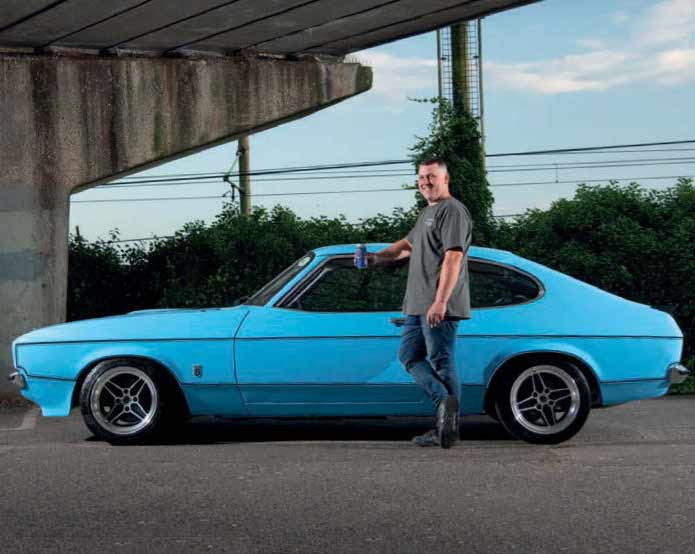 “I’m from a drag racing background and everything I own has to be fast up the strip,” he confirms. “I never really cared how it looked before this car; it was usually rougher the better!”

However, that all changed when it came to building this stunning Mk2 Capri, complete with perfect paint, a beautifully finished engine bay and a fully restored interior. The story of this very different build for James began over a year ago and with another car altogether, as he explains to us. “A while back

I had a Sapphire Cosworth that I was restoring, but as it was a 4x4 I had converted it to rear-wheel drive,” he says. “However, as the restoration went on, I realised the car had to return to standard to keep it original and that’s just not me; I’m a rear-wheel-drive man and I couldn’t stand the idea of people doing burnouts around me while I’m stuck in a 4x4!” 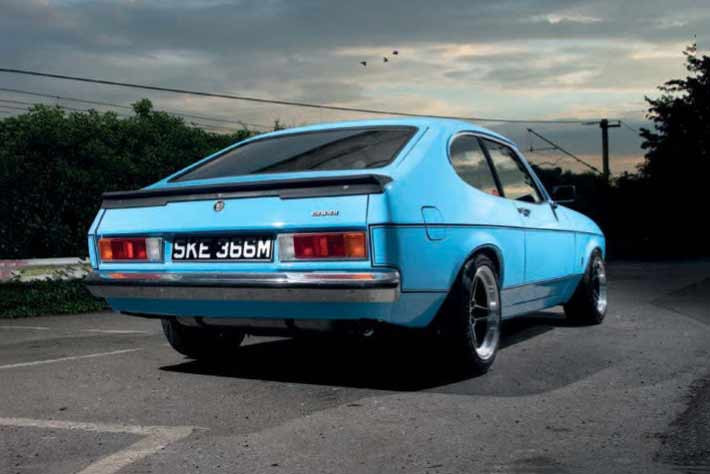 So with the idea to build a usable, fast road classic Ford, James kept hold of all of his 2WD Cosworth running gear and went on the hunt to find something suitable to slot it into. The perfect solution seemed to be the Mk2 Capri rolling shell he found for sale on the internet. A deal was promptly done to part exchange the 4x4 shell and so began the new build, which at first appeared to be a quick and easy swap.

“The Capri had previously been fitted with a YB turbo, so I thought it would be a very simple build,” recalls James. “But that idea soon changed as it turned out the shell had only done 34,000 miles and when I saw underneath it was like brand-new.”

Although it’s not what he was used to, James decided rather than simply put it back together, the mint shell deserved to be built into something special and he had a vision of how he wanted it to look. “I’ve never had a really clean car that needed serious time and care putting together, so it was a challenge but I wanted the best of both worlds; a very fast but also showy car built to almost concours standard.”

In order to do the job properly, the first job to tackle was the exterior, which involved removing the side stripes that had been previously applied. However, this revealed the first major issue that was to ensure this would be no easy build.

“It turned out the swage lines were partly missing so first of all I had to have the bodywork done as both sides of the car needed repainting,” tells James. 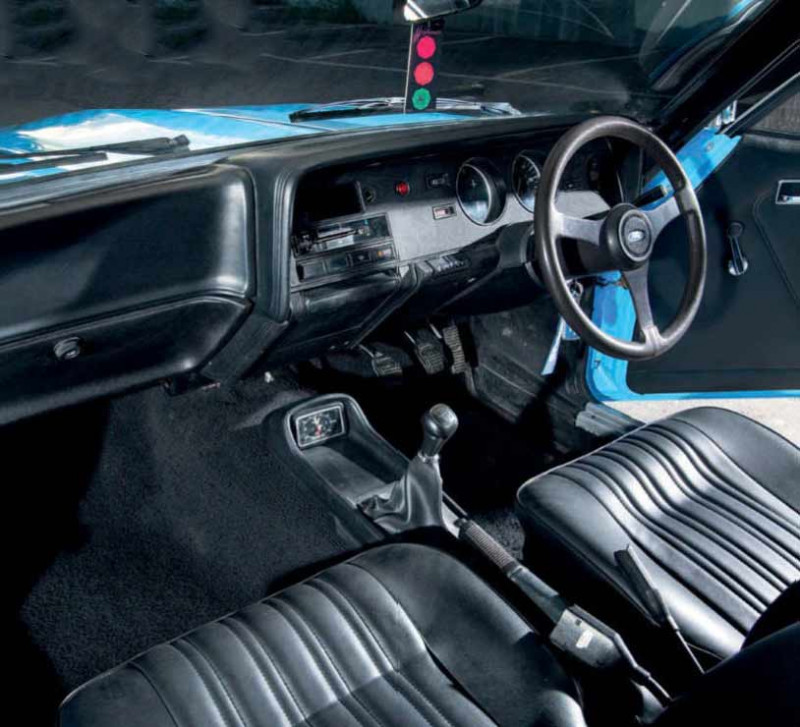 Undeterred, upon its return the fresh bodywork was complimented with a few choice additions as James was keen to put his own mark on the car. So the Mk3 rear spoiler, 3.0S lower front splitter and matching side stripes were added, and to complete the look came the 8x15 inch four-spokes. The larger diameter were required as the previous 13 inch wheels wouldn’t fi t over the big brakes James had also opted for this time round. “I’ve never had a car with big brakes before, so that was another first!” James tells us with a chuckle.

A full interior was another item that usually came low on the list of previous priories, but James was determined this build would remain a car that he could take the kids out in. So with practical all-rounder in mind, the interior was built back up with a full trim that was given a refresh by a specialist.

The final piece of the puzzle was to install the rebuilt and uprated YB engine that had been carried over from the past project, but ensuring it looked and fitted how he wanted inside the engine bay meant starting again with a lot of the conversion.

In fact, what should have been a simple build took around a year to complete, but the end result is an exceptional effort, especially when you consider James doesn’t work on cars for a living.

“I’m a tiler by trade but I’ll give most things a go,” he tells us. “My good friends, Glen Sexton and James Pepper, better known as the Essex Boys or South End Circus, are always on hand to help and we pretty much do everything together. If you look at our three cars they are all built in a very similar way. There’s lots of banter and beer when we’re together too — but obviously we all know my car is the fastest!”

“I WANTED A USABLE AND FUN ROAD CAR, BUT I’LL STILL RUN IT UP THE STRIP” 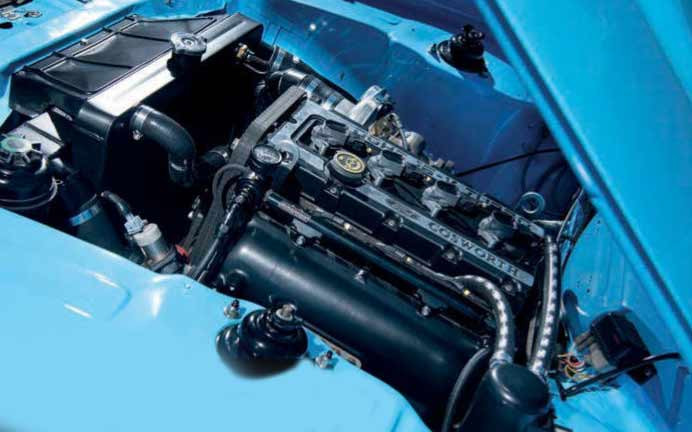 There are still a few bits left to do on the Capri so it’s not quite finished yet, but James has still been out enjoying it and isn’t afraid to use it, as you can see by the burnout pictures. “It feels a lot like my other Capri in some ways, as it’s lairy and feels very fast,” James explains. “It’s not even fully mapped yet, so there’s more in it too. And although I always wanted it to be a usable and fun road car, I will be having a little dabble up the strip at Santa Pod. But I don’t want to go down the route of fitting slicks as I know how that starts going!”

Final plans to finish the car are afoot with the last piece of the puzzle to be a custom power steering conversion using a Sierra pump, adapted Capri 2.8i crossmember and custom hoses. After that, attention will be turned to James’ three-door Sierra drag car, powered by a big block Ford V8. But with the help of mates like James’, that will soon be finished though we can imagine… 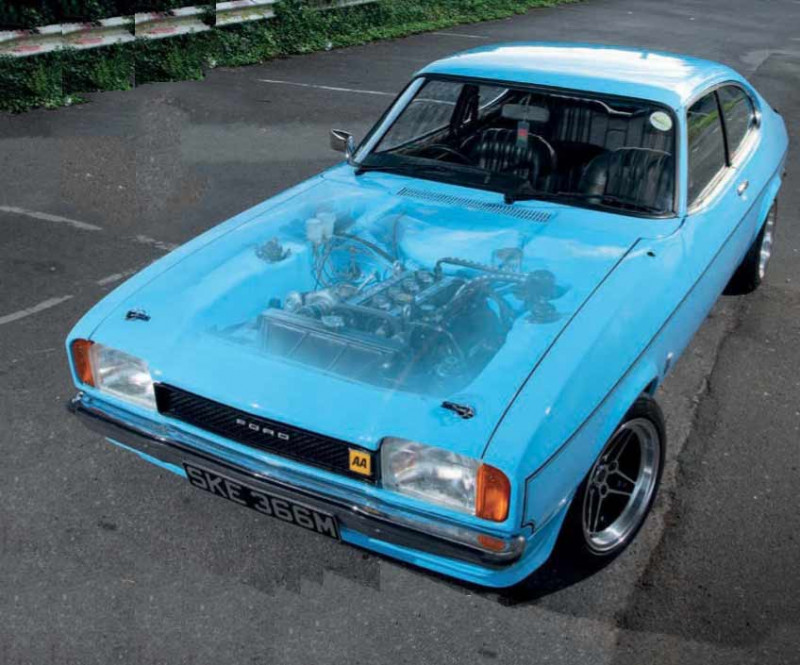 It’s yet to be fully mapped, but the Cosworth YB has all the right ingredients to make some decent power. It also looks like a factory install. James went to town on the YB install, even making sure the AN fuel fittings were colour-coded. The entire interior has been given a refresh and it shows, with the all-black theme complementing the Olympic Blue superbly.

Good call: James is no stranger to a classic Ford project, but it’s fair to say the Capri is a cut above his previous builds. Above and below: Mk3 rear spoiler works well alongside the 3.0S stripes. 15 inch four-spokes needed to fi t over the AP Racing brake it — and they fill the Mk2 arches rather nicely.

“IT WAS A CHALLENGE, BUT I WANTED THE BEST OF BOTH WORLDS — A CAR THAT WAS VERY FAST BUT BUILT TO ALMOST CONCOURS STANDARDS”

Making the vast Capri engine bay appear clean cut, purposeful and factory looking is impressive, but James and his mates worked hard to pull the look off. Even though the car was YB-powered before, most of the conversion was re-done to make it look like this. “Things like the intercooler set up that came with the car were just too ugly to use with what I had in mind for it,” James explains. “I wanted it done my way, but it took a lot of time and thought to achieve that look.”