Richard Heseltine looks at Chrysler’s sub-compact concept which turns into a people carrier, the Voyager III – a concept which most definitely took a voyage to obscurity…

From here to obscurity Richard Heseltine’s weird and wonderful American cars from the past.

As concept cars go, the Chrysler Voyager III was extreme, yet rooted in reality. Sort of. Ish. That said, should you be feeling pedantic, you could argue that it represented two vehicles in one. Unveiled at the 1990 North American Auto Show in Chicago, the oddball was variously a commuter shuttle for city use and also a people carrier, just not at the same time. It was, if only in the eyes of its creators, the best of both worlds. And who were we to argue? 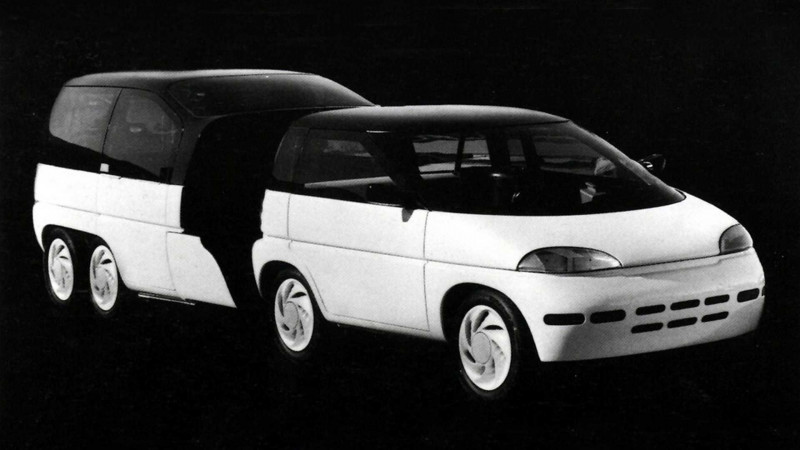 The front section of the Tom Gale-instigated Voyager III could be separated to form a front-wheel-drive small car with room for three occupants that was powered by a propane-fuelled 1.5-litre three-cylinder engine with an unspecified power output. Chrysler’s PR bods talked up a storm about it returning excellent fuel economy and lower emissions but were a bit vague when it came to publishing the numbers. In many ways, in this form the car wasn’t especially unusual, being roughly equivalent to production cars such as the Ford Festiva.

However, the addition of a rear ‘module’ changed the look and function of the Voyager III somewhat. The car effectively became a cab, the complete vehicle now being able to seat 11 occupants. Not only that, this section also came equipped with a separate 2.2-litre four-cylinder unit. The two engines were interconnected electronically (somehow) and allied to a four-speed automatic transmission, with power output apparently equivalent to that of a regular small-displacement V8. However, you could always use just the front engine (apparently).

In twin-engined configuration, the Voyager III boasted four-wheel drive. When the two sections detached, the cab’s rear wheels lowered electronically. With it in place, they retracted underneath the vehicle with spats covering the wheel wells. It also had a 3099mm (122in) wheelbase and was 5045mm (199in) long overall. That was roughly equivalent to most contemporary Minivans. There was also a rear-faced TV screen to help the driver when docking, and mooted future iterations of the modular set-up included a camper and pick-up.

Chrysler Corp’s president, the never knowingly not showy Bob Lutz, said at the time: “You see people going into downtown areas in full-size vans wasting fuel and clogging up space. It seemed to us like a neat idea to be able to leave two-thirds of your vehicle at home.” He also admitted that the chances of it ever making it into production were “not great” because it “…is very expensive”. The official party line suggested that such a vehicle would not be manufactured in series for at least a decade, the challenges of synchronising two engines being somewhat, er, challenging.

You could also argue that North America simply didn’t want a minicar that morphed into a minivan. There was also the nettlesome issue of where to keep the severed section when not in use. Following a handful of show appearances, the Voyager III was consigned to history. That, and we surmise, the scrapper because it hasn’t been seen publicly since.

An ingenious idea… that nobody wanted?!