At a time when its ilk are being phased out of existence, does the G21 Alpina D3 S Touring – based on the M340d xDrive – do enough to rebel against the extinction of diesel? Words: Simon Jackson. Photographs: Dan Bathie.

Extinction Rebellion — Is this Alpina Touring all the BMW you'd ever need?

For better or worse the diesel car will soon be consigned to the history books, but no matter your view on whether that is a good or bad thing one fact remains: for decades some of BMW’s most popular models have been powered by the stuff. That’s never been truer than when it comes to the diesel Touring – powerful, economical, mile-munching diesel estates are an area in which BMW has, and does, excel – even today, when cars of that ilk are viewed as dinosaurs. Rebelling against the extinction of diesel is probably pointless but in the G21 M340d xDrive we have one of the all-time greatest derv-supping BMWs of modern times – a mighty swan song for the genre? Perhaps.

Alpina’s G21 D3 S Touring – the first mildhybrid out of Buchloe – is based on the M340d xDrive but it aims to improve upon the (already fabulous) factory recipe in every way. Sales suggest it succeeds in its quest, Alpina is selling cars like hot cakes at the moment and, notably, Touring models outsell their saloon counterparts such is their enduring appeal. The fast diesel BMW Touring is not done quite yet it would seem...

This latest Alpina Touring retains the 3.0-litre twin-turbo six-cylinder diesel engine and four-wheel drive setup found in the base car. That motor is no slouch as standard, delivering 335bhp and 516lb ft of torque with a 48V mildhybrid system providing 11hp via an electric motor. It’s a case of old technology working in harmony with new. The hybrid system essentially fills in the gaps in power delivery left by the internal combustion engine – most importantly eradicating any unwanted turbo lag. 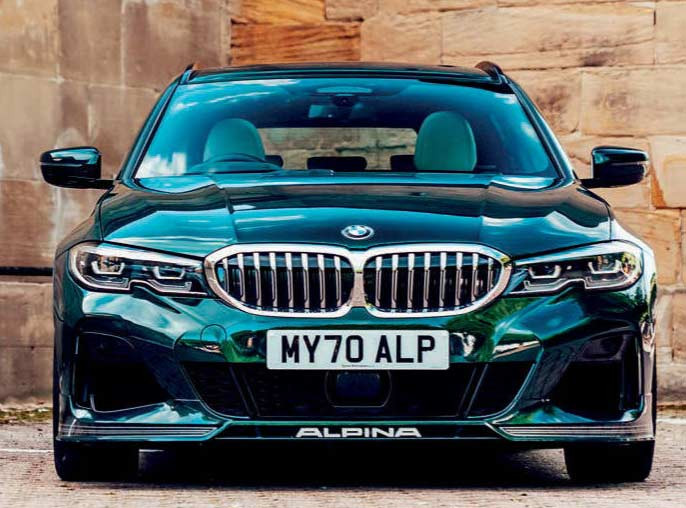 Through Alpina’s ECU trickery the G21 D3 S Touring benefits from a hike in both power and torque to a not-so-inconsiderate 350hp and 538lb ft (up 15hp and 22lb ft respectively), peak torque being available at 1,750- 2,750rpm. In order to accommodate the extra power two new radiators and an intercooler are fitted to keep the car’s mechanicals cool, there’s also a different exhaust system for freer-flowing gasses and additional changes to when and how fast the ZF eight-speed automatic gearbox (it is the 8HP76 ‘box) shifts gears – there’s an uprated torque converter here too, all this serves to improve the driving experience.

Alpina’s traditionally subtle styling cues continue. There’s an extension to the front bumper prominently featuring the Alpina lettering, a redesigned rear bumper – home to chrome quad exhaust pipes, and then there are those signature Alpina wheels – staggered five-spoke ‘Dynamic’ 19-inch affairs (8.5-inches wide at the front and 9.0 at the rear) as standard but striking multispoke forged ‘Classic’ 20s in this instance (a £2080.00 option box you simply must tick). 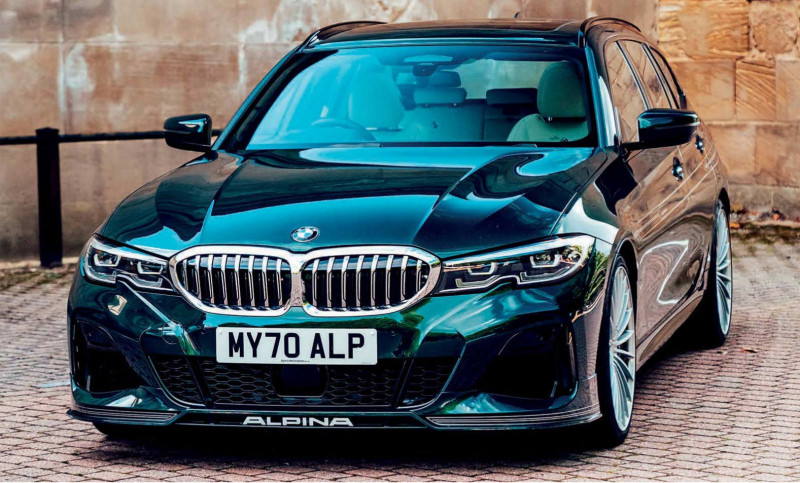 Inside there are a few clues to distinguish this car from that upon which it is based – Alpina graphics on the digital dashboard display, a numbered plaque on the centre console. To look at and on paper, then, this car is every inch an Alpina, but what is it like to drive?

Realistically there’s very little that overtly signals this car is a diesel, from the moment you start it, especially compared with BMW oil burners of old that’s for sure. That illusion is continued as you get moving, thanks in part to the clever use of that electric motor which ensures the car travels through the power band with minimal interruption – much like a petrol car might. The factory M340d xDrive will reach 62mph in 4.8-seconds and this car matches that (the saloon is a shade faster at 4.6-seconds to 62mph), and it’ll reach the round 200km/h (124mph) figure that the German car industry often uses as a benchmark in 18.3-seconds (17.5-seconds for the saloon variant), that’s before reaching a top speed of 170mph. Yet those numbers tell far from the full story. 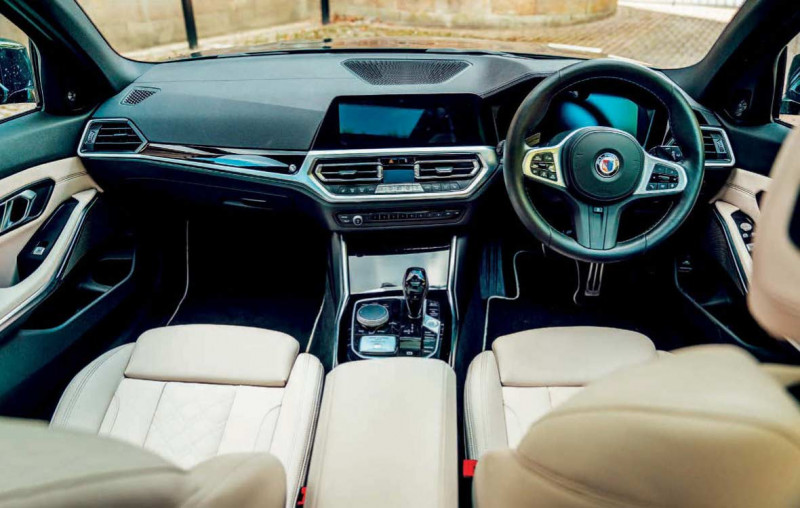 We pick up our test car, shot in Alpina Green metallic (a £1740 option) and appropriately shod with the numberplate ‘MY 70 ALP’ – from Alpina’s UK headquarters at Sytner Nottingham. There’s time to appreciate its style, of which there is much to like. The interior is finished in Merino leather Ivory White (a £1900 option) while I personally love the usual 3 Series options here of a Panoramic glass sunroof (£1,190), Head-up Display (£1,030) and LED headlights (£935.00). I feel that the optional matt black Alpina Switch-Tronic shift paddles, CNC machined from aluminium, probably represent £280 well spent, too. In total the options list runs to a total of £13,805 making this car’s total on-the-road price £69,755.00 before the addition of VAT. Now, admittedly that’s quite a bit of money for a 3 Series but this is no ordinary 3 Series and, perhaps unusually for an Alpina, its entry-level cost at £55,950 is only a few thousand pounds more than the car on which is it based.

The versatility here is almost incredible. The only question left is whether you should buy one?

Navigating through Nottingham’s busy roads the car is more than easy to use in an urban environment, smooth and responsive but never overpowering in sedate city traffic.

There is, however, the underlying knowledge that this car can take-off at the drop of a hat, and when the road ahead opens-up and with said hat thrown to the floor – Comfort mode replaced with Sport – that is quickly confirmed. Although the overall pace up to 62mph is the same as the base car the power delivery through the middle of the range is not, the far more pronounced torque curve ensures the D3 S Touring feels very fast indeed. Its punch in the overtaking window of 40-60mph is probably where its best talents are to be found, all this without much – if any – turbo lag which soon has you forgetting that it doesn’t much excite above around 5000 revs, conversely it is almost breath-taking at around 3000rpm pushing you back into your seat – such is the way of powerful diesels. 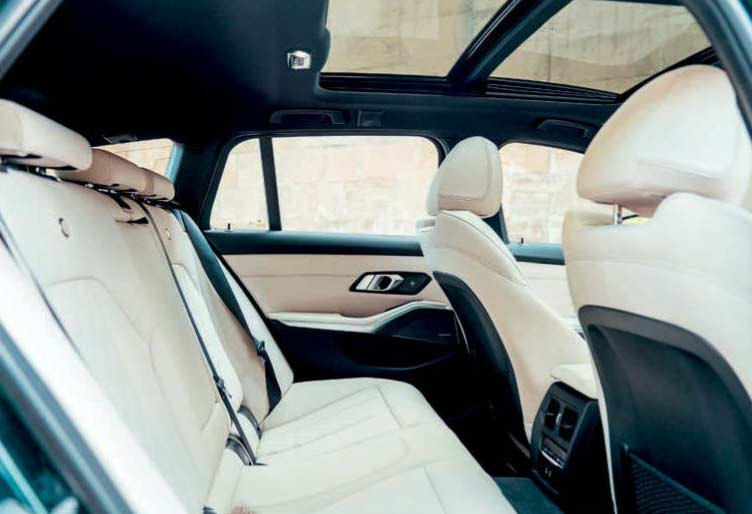 Thanks to that xDrive system and specially designed Pirelli P Zero tyres (marked ‘ALP’ by way of confirmation) traction is never broken. Alpina has devised its own torque split for the four-wheel drive system, and in combination with its other chassis tweaks it means you can really hustle this car without loosing grip. The fitment of Eibach springs and bump stops, dampers and anti-roll bars is joined by uprated driveshafts and bespoke software for the electronically-controlled limited-slip differential out back. The braking system comprises fixed four-piston callipers with 395mm discs at the front (these pinched from the more powerful 608hp Alpina B5), and floating callipers with 345mm discs on the rear.

The steering too has been revised, it provides a composed and somewhat pointy nose which in combination with the chassis upgrades adds dollops of confidence in the corners – it’s likely a touch more granular in detail than in the M340d to boot but you’d need to drive them back-to-back for best analysis. On the same note, you’ll be hard pushed to provoke the rear end here which is either music to the ears of those who are a trifle intimated by the sheer power and ability of this car, or disappointing for those who like the feeling on the edge of adhesion as many BMW drivers likely do. That said we are talking about a very quick car here, one that could get away from you in a flash if things didn’t go to plan, and besides, those changes to the torque split favour a rear-bias, more so than in the factory M340d xDrive, anyway. But in summery, even in Comfort mode, there’s nothing to worry about as this car is very rewarding to drive.

So, what, if anything, does this diesel Touring offer that a petrol Alpina relation cannot? Economy, of course. The paperwork accompanying this car tells us that it can achieve 42.2mpg on the combined cycle and that’s not hyperbole – as we discovered on a sensible motorway run. In all honestly it’s one of the most impressive things about this car for one minute you are asking a 2010kg estate to reach 62mph in under 5-seconds, the next to carry up to 1510-litres of your luggage, and then to return over 40mpg. The versatility here is almost incredible when you stop and think about it. The only question left, then, is whether you should buy one?

Undoubtedly Alpina customers are connoisseurs of all that is BMW, so it’s unlikely that a high percentage of those in the market for one might be considering anything similar from a rival brand – the likes of the Audi S4 Avant, for example, purely because there is little similar nor as exclusive. You buy an Alpina because of what it can do, but also what it represents to you as a true BMW enthusiast.

That’s the crux of the matter here – this car’s exclusivity. Far from being your common-orgarden tuning house, Alpina’s cars are lifted off the main BMW production line and given their exclusive finishing touches, and Alpina’s chassis stamp as a bonefi de car manufacturer, in Buchloe. Cars like the G21 Alpina D3 S Touring follow in a long line of revered Alpina cars, vehicles oozing style, speed and exclusivity. When you look at a car like this you either instinctively know it is as an Alpina, or you do not. You either ‘get it’ or you don’t. Cars like this Touring are therefore special, they turn the heads of the initiated, they command the respect of those in the BMW world, but to others they can fly straight under the radar as ‘just another BMW estate’. Therein, for some, I have no doubt, lies their appeal.

With the rise of the electric car the diesel-powered Alpina is surely not long for this world? That’s a shame as with this D3 S Touring we have reached a point in the development of diesel and hybrid technology and drivability where a car like this can drive almost as an equal to its petrol equivalent. But such is the way it must be in the name of progress and the environment.

The D3 S Touring – surely one of the final diesel-powered Alpinas, is also one of the best. Should you buy one? Indeed you should for in the not too distant future you will not be able to buy such a car. This may well be the epitome of the diesel-powered BMW and what a way to sign off…

The diesel-powered Alpina is surely not long for this world?