Conceived in the Morning Glory era and ripe for reappraisal, this showroom-condition E36 318i convertible is a near-unbelievable 9,100-mile stunner. Words: Dan Bevis Photographs: Jason Dodd

There’s something elemental about driving a convertible. With pleasant conditions and a suitably appealing backdrop, you can feel truly at one with the machine beneath you while the multi-sensory whooshing of nature itself serves to amplify the visceral experience. The tactility of the inputs and rewards, the artful rearrangement of your hairdo, there’s nothing quite like it. 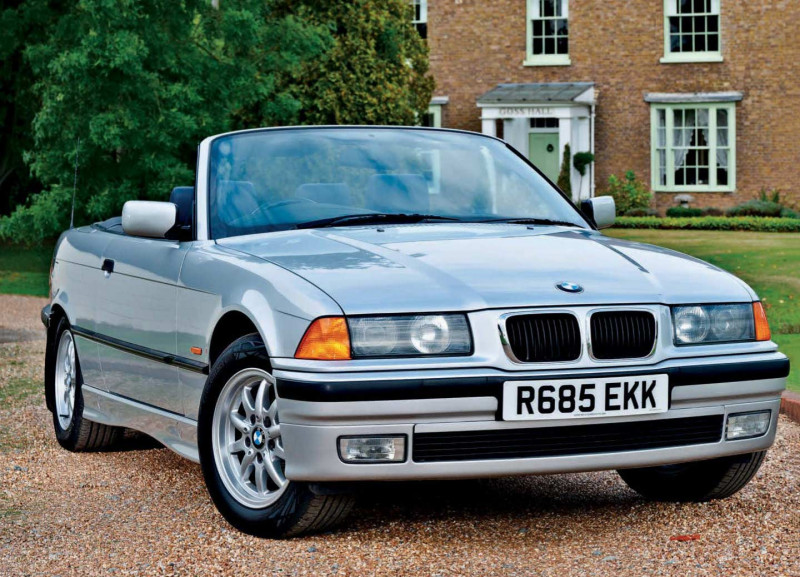 Throughout the summer months, we know precisely what that means: the roof goes down, the tunes go up, life is sweet. Yes, it may seem hard to imagine right now, as we trudge through the seemingly endless and murky depths of winter, but the sun will come again, we promise. And now is really the time to be thinking about buying a drop-top because, well, what manner of crazy person would be driving around in winter with the roof down?

Well, not crazy people at all, in fact. Sensible people. Because we’d suggest that if you’ve bought a convertible, it’s pretty much your civic duty to drive it with the roof down at all times, unless it’s actively raining. Just stick the heater on and enjoy the fresh air, we say.

This sort of laissez-faire tomfoolery is very much in keeping with the over-arching ethos of the 1990s, which is eminently appropriate given that the subject under scrutiny is an E36. The third generation of 3 Series was on sale for the entire span of the nineties, the time of Britpop, New Labour, Crinkly Bottom and Girl Power, life was optimistic and colourful and vibrant and exciting. Sort of the opposite of the 2020s, really. BMW’s E36 was very much the automotive embodiment of this period in history, with the range offering all manner of diverse models from the sublime to the ridiculous. The glory box for the ‘common people’ could be a well-specced saloon; if your house smelt ‘like teen spirit’ then there were sensible hatchbacks and Tourings to accommodate, whereas those looking to ‘spice up their lives’ could opt for a full-fat M3 in assorted configurations. 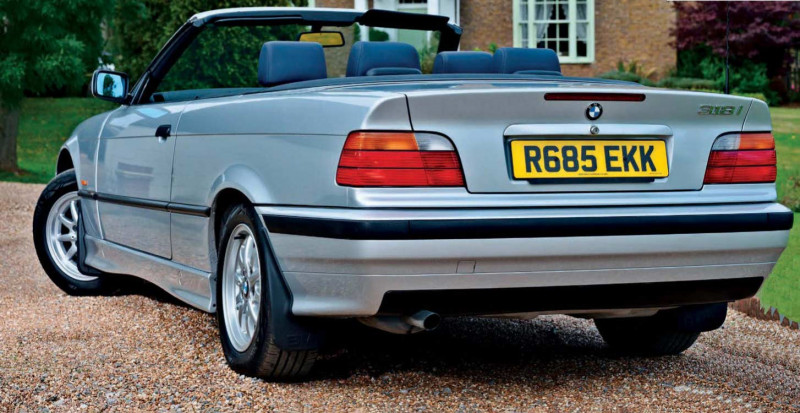 Interestingly, BMW chose to launch the E36 with the four-door saloon as the flagship, with the other variants arriving shortly after, and it’s fair to say that each individual character found its niche. With the crisp new ‘dolphin shape’ design and typically engineeringled underpinnings (propelled from the rear, naturally, and with a near-enough 50:50 weight distribution across the range), and it’s interesting to note that the convertible variant didn’t arrive in the showrooms until 1993, a good few years into the cycle. The 3 Series has always had an interesting relationship with roofless variations; looking back a generation, the convertible version of the E30 was never originally intended to exist. When the E30 launched as a range of saloons and estates, the drop-top wasn’t in the picture; knowing that there would be a niche demand for a soft-top, BMW commissioned Karrosserie Baur to develop one as an option, replacing the main roofskin with canvas. When it became apparent that an open E30 was something the public really wanted, however, BMW’s engineers cracked out the can-openers quick-smart and crafted something that was elegant and sophisticated, a full convertible. So it was clear that the format would be in the offing from the outset with the E36, but there was still a certain amount of testing of the water to be done. A considered approach, to bring to market something that really would sell like heiße kuchen. Indeed, to keep the public sufficiently juiced, the E30 convertible remained on sale in parallel with the rest of the new E36 range, to keep the party rolling and the sun-worshippers satisfied. 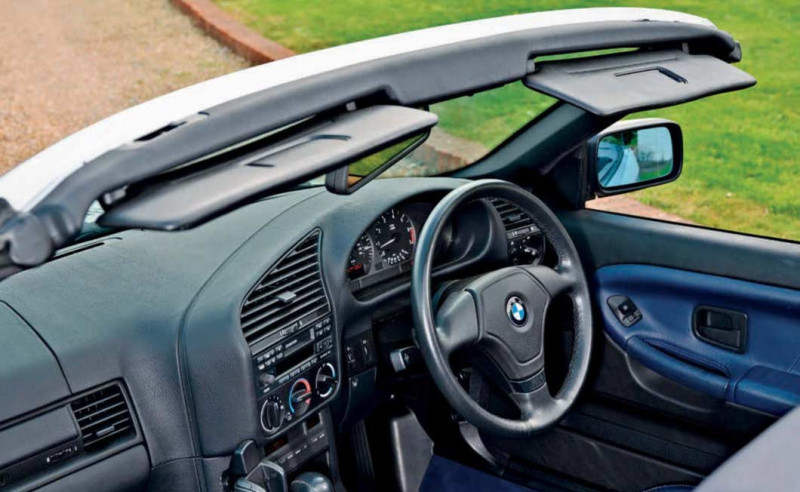 The E36 convertible, then, was an elegant thing. Tastefully conceived, its lines speak of a design that was on the table from the get-go rather than simply scything the roof from an existing model. And as befits the all-things-to-all-people diversity of the E36 model range, there was a wide assortment of engine options in addition to trim levels and spec variants. Yes, there was even a rag-top M3. And sitting way down at the other end of the food chain was the humble 318i – the car you see here. And at this point it’s going to be necessary, if you don’t mind, to figuratively cup our palms around your ears and wiggle your head from side to side a little. You see, in this day and age this car requires a gentle reframing. There was a time when the ill-informed might perhaps have sneered at a 318i, particularly one with an automatic gearbox, as these humble ingredients mightn’t have held much sway with the sort of 325i driver who liked to slap his oversized BMW keyring down on the bar at the Lamb & Flag and proceed to tell everyone how brilliant he was for owning such a thing. But the world has moved on. With the benefit of hindsight – not to mention the E36’s solid gold credentials as a desirable modern classic – we can see this formula for what it is: an eminently appropriate accompaniment to a car built for luxurious wafting. Because while it’s true that the convertible was available in full-fat M3 spec (and a very capable thing it was too), the drop-top E36 isn’t a sports car. Not in its soul. It’s a cruiser. And a 318i with a slushbox does the cruising thing exceptionally well.

As if your perceptions weren’t already confounded enough with all of this new-wave caper, we have a further surprise to impart: this 318i isn’t just a strangely tidy example; no, in fact it’s something so outstanding as to most likely be unique. It’s a survivor. A genuine, bona fi de, nearly-new curio. Peep at the milometer and you’ll see that in its entire life, this car has covered just 9,100-miles. That’s a mere 395-miles for each year it’s existed. You’ve walked more miles than that just going from the sofa to the kitchen and back for Hob Nobs.

It’s not just the mileage that makes it remarkable. Fans of Douglas Adams’ seminal masterpiece, The Hitchhiker’s Guide to the Galaxy, will be aware of the notion that throughout one’s life, there’s an invisible cord running from your umbilicus and attaching you forever to the place of your birth. These get stretched and tangled over time; in the case of Arthur Dent, it’s severed entirely when the Earth is demolished by the Vogons. But for this 318i, the imperceptible tether can only be a few miles long; on sale today at Goss Hall Classics in Ash, just outside Canterbury, it’s a stone’s throw from the dealer which originally supplied it on June 6th 1998 – Newmans of Canterbury. Presumably that buyer in the Blur vs Oasis era wasn’t aware that they were being handed the keys to something which would one day be considered museum-grade, but here we are. Life has a funny habit of working out that way. That same owner has hung onto it for the entire time, keeping it impeccably maintained and flawlessly presented, until events conspired to eventually let it go.

Oh, and it’s a magnificently specced thing too. 1990s BMW options lists are always fun to peruse, and this canny owner clearly had an eye on the finer things; they may have plumped for the comparatively humble drivetrain choice, but they made up for it in the details. This Arctic Silver convertible features a contrasting blue roof to complement the gloriously blue leather interior. Elsewhere we find boxes ticked to upgrade to the heated door mirrors, front passenger airbag, manually adjusted steering column, leather steering wheel, heated sports seats, front centre armrest, outside temperature gauge, and BMW Business radio. Even if the car weren’t an absolute timewarp, this specification would be impressive. As it is, we want to wrap it up in our arms and tenderly carry it home.

With this powertrain, it makes for a surprisingly compelling package. The later 318i came with the M43B18 engine (as opposed to the earlier cars’ M40), and while its 114hp and 124lb ft were unlikely to help you win at Top Trumps, it delivers smoothness and frugality with an endearing underlying eagerness.

The automatic transmission is a handy accomplice as its ratios are well-judged and it leaves you free to get on with the business of grasping for your hat as it sails away, and scraping the flies from your teeth. In an impeccably elegant manner, of course.

What this 318i is really, in essence, is a gateway to a simpler time. An age of Teenage Fanclub and The Big Breakfast, before the world got all worrying and strange. More than that, it’s a car that deserves to be reconsidered. In these times of clarity, we can see this E36 for what it is: a magnificent example of a superb all-rounder.

The other open-top E36

If you’re the type of person who prefers their cars to be belligerently strange, there is another open-air E36 to consider. Well, if you can find one. Built by Karrosserie Baur, who have been slicing the roofs off BMWs since the 1930s, the TC4 was a properly odd kid. Based on the four-door saloon, it essentially replaced the centre section of the roof with canvas while retaining full-length rails, like a Citroën 2CV. Their line of thinking was that it provided all the freedom of a convertible with all the safety of a tin-top. Sadly the buying public didn’t agree, and just 321 of these bizarre rag-tops were retro-fitted for truly discerning oddballs.