We trace the tracks of some obscure Roman roads in Britain to find out how Ferrari’s new Roma performs in the real world. Story by Chris Rees. Photography by Michael Ward.

What have the Romans ever done for us? No, I’m not turning into John Cleese and I’m not about to do that famous Life of Brian sketch. Well perhaps one bit of it: the roads; obviously, the roads go without saying, don’t they? So what if we took the new Ferrari Roma on some of those roads that the Romans built, all those centuries ago, which can still be readily traced on maps today? 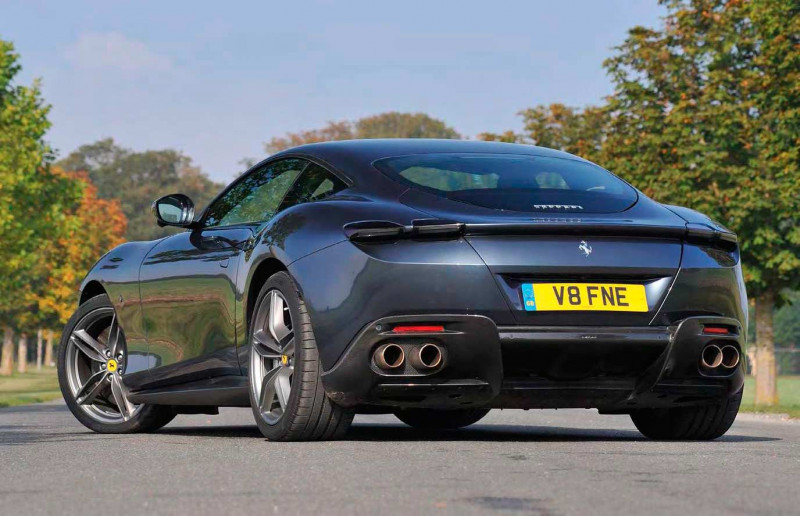 Given that the Roma had been booked in to perform the role of pace car at our Brooklands Italian Car Day, we simply didn’t have time to drive it up to our ideal location: the very furthest northern reaches of the ancient Roman Empire in Scotland. Being confined, therefore, to a road trip in the south of England, necessity forced upon us another idea. Which leads us to present, ladies and gentlemen, the ‘Roman Triangle’.

Having collected the Roma from Ferrari North Europe’s HQ in Slough – as far as I can tell, not a location ever troubled by the Romans – the nearest Roman track we could find was the Devil’s Highway. This Roman road used to cross the River Thames at the equally exotic location of Staines on its way west from London to Silchester. Although this ancient route has now almost completely disappeared, patches of it still exist, for instance in Crowthorne, where evidence can be seen in the ancient fort of Caesar’s Camp, which is kind of my childhood gaff (I remember frequenting it as a kid on a Raleigh chopper).

The minor roads that most closely follow this old route do give me the opportunity to test the Roma’s suitability as a daily driver. Here, its compact dimensions and commendable visibility make life so much easier than in an F8 Tributo. Over frequently potholed tarmac, the Roma also rides surprisingly well, especially with its manettino ‘bumpy road’ button activated.

Arriving in Silchester – where you can trace the remains of a Roman amphitheatre – we head northwest to pick up the old Ermine Way to Cirencester via Lambourn. This provides the joyous prospect of tackling the B4000, which shadows the westward course of the M4 through Berkshire and whose die-straightness is so clearly Roman. This splendid road takes you straight (literally) into the heart of the aptly named Valley of the Racehorse, home to some 1500 cavalli in over 50 racing yards. Plenty of long-distance visibility along this road means you can build speed quickly – not a problem for the Roma, whose 620hp twin-turbo V8 gives it pace to match almost any current Ferrari. The quoted 0-62mph time is 3.4 seconds (there’s even an ‘L’ launch control button on the gear gate to help you out) but the more telling figure is 0-124mph in just 9.3 seconds. One further boon on this straight road is just how flexible the V8 is, perfectly capable of accelerating away from 1000rpm with ease.

But what about how it sounds? Here I feel a slight pang of disappointment. It’s brawny, even boomy, at low revs. Yes, it mutates to a more urgent note as your revs rise but it never truly ‘screams’, remaining in the more subdued suburbs of subtle purposefulness. This is a relaxing car at speed, for sure, but never sounds truly exciting. I wish Ferrari engineers would pop in to visit Maserati for a lesson in exhaust tuning. At least it means the Roma doesn’t scare the racehorses…

It’s impossible to resist a detour and follow the signs to Uffington’s famous white horse carved into the hillside. We ignore the main car park sign and instead follow the tiny twisting road that snakes up below the horse itself for some stunning views across the landscape below. This hilltop moment also provides an opportunity to admire the Roma’s understated design, in such stark contrast to the brashness of most modern supercars. Its smoothly sculpted flanks and flowing rear end feel completely natural and organic, faintly recalling early 1960s Ferrari 250 tropes. There’s no rear spoiler either – well, actually there is but it only rises when you exceed 62mph. The rear lights look modishly squared, while thin front lights frame what is perhaps the most controversial aspect of the Roma’s design: its body-coloured front grille. It’s a bold choice, but one that works well in sober colours like the Grigio Chiaro on our test car – although I think the radar camera beneath the grille is an unsightly monstrosity.

Heading back down from the Uffington horse, we complete a little loop to the south of Swindon to head towards Wroughton on the B4005 and then south on the A4361 through some gloriously open, lightly trafficked roads to the pre-Roman sites of Avebury, Silbury Hill and West Kennett Long Barrow. These stretches prove perfect for testing the Roma’s handling and its multiple driving modes (Wet, Comfort, Sport, Race and ESC-Off). Frankly, there’s very little difference between Comfort and Sport modes. But in Race mode, the gearshifts are notably sharpened up, whether you’re shifting automatically or manually. The rear end also becomes much looser. Ferrari’s Side Slip Control and Dynamic Enhancer allow you to hurl the Roma into bends with complete trust in its mechanical balance. If the rear wheels do start spinning, the software will dab the brake on one wheel to keep the slide in check but allowing you some sideways action in safety. Despite quite soft damping up front, the Roma hardly rolls at all in corners and is delightfully agile, predictable and fun on these challenging roads.

The eight-speed dual-clutch automatic gearbox is borrowed pretty much direct from the SF90 Stradale and has a retro-look cancelletto gear lever gate (which feels a bit gimmicky to me). There’s no questioning the ’box’s super-quick, super-smooth changes in auto mode, but the manual-shift man in me feels happier using the delightfully snappy paddles.

Back up to Swindon, we pick up the A417, which is the old Fosse Way – one of the longest Roman roads in Britain, stretching from Exeter to Lincoln. We don’t stay on this for long, though, before peeling off east at Cirencester to follow the route of Akeman Street, which connects up to Watling Street at St Albans via Bicester. Actually it’s very hard to trace at all, with only parts of the road still in existence in small villages like Chesterton, Kirtlington, Ramsden and Asthall. It’s more obvious when it becomes the A41 from Bicester to Berkhamsted.

On this stretch, I’m able to appreciate the interior, whose quality is really superb. The new digital dash will come as an ergonomic shock to anyone used to driving conventional Ferraris. The huge 16-inch curved screen ahead of you is brilliant: it’s superbly clear and you can toggle screens using buttons on the steering wheel, including a ‘View Max’ button to display ‘full-screen’ the sat nav or rev counter, for example. The 8.4-inch central display looks a little bit like a removable iPad but it all works very well once you get used to it.

The cabin ambience is rounded off by neat-looking switchgear. However, I never bonded with the touch-sensitive ‘haptic’ switches, which sometimes respond slowly and at other times are over-sensitive. One other plus: Ferrari has – thank goodness – resited the cruise control to the steering wheel, so you no longer have to move your hand off the wheel to adjust the settings. The Roma has practicality on its side, too.

Although it’s classed as a 2+2 on paper, rear headroom is so ludicrously tight that even children will struggle. Best to fold the rear seats down and boost the boot space up from 272 litres to 345 litres – perfect for all the photography paraphernalia we need on this trip. On our trip, the big 80-litre fuel tank doesn’t need to be refilled either.

As we complete our Roman Triangle back towards the environs of Slough, I’m left to reflect that it’s not what the Romans have done for us, but what the Modenese have. The Roma has felt right at home on pretty much every road: Roman-straight or tight-and-twisty; smooth motorway or potholed by-way. And that’s surely the point. The Roma is the perfect all-rounder: a car you can happily use every day, yet plenty perky enough to feel like a pukka Ferrari – which of course, it is. 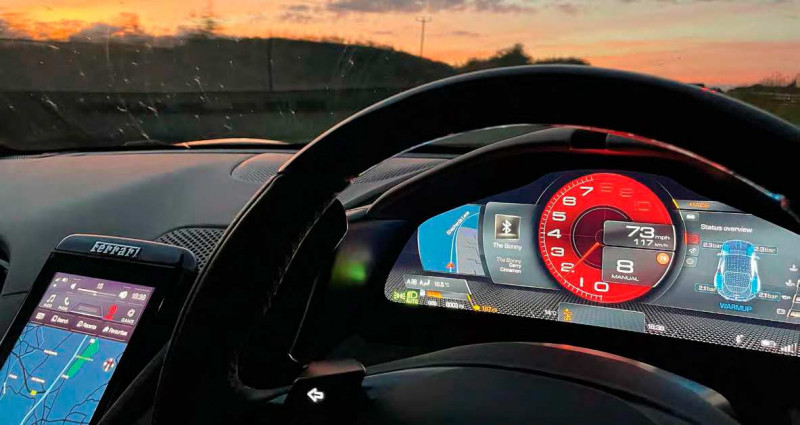 Crystal-clear digital display is readily configurable using buttons. Cruise control is now thankfully on the steering wheel, too. Roma is good on die-straights, even better on corners. Cabin oozes quality but initially takes some getting used to.

Article type:
Review
2022 ferrari roma2022ferrari romaferrari
—
730
Write a comment
No comments yet. Be the first to add a comment!