We catch up with the proud owner of a 2009 Bentley Continental GT Supersports, the fastest Bentley of its era and one of the most exhilarating road cars ever to come out of Crewe. Words: Paul Guinness. Photography: Gregory Owain.

The Supersports was the quickest Continental GT of its time – but what’s it like to live with now?

You might think it takes a very special machine to tempt a self-confessed enthusiast of Italian sporting cars out of his charismatic Maserati and into a Crewe-built coupé. And indeed, the Supersports version of the first-generation Continental GT is special, aided by its headline-grabbing 621bhp output and a top speed just a fraction of a second off 205mph. 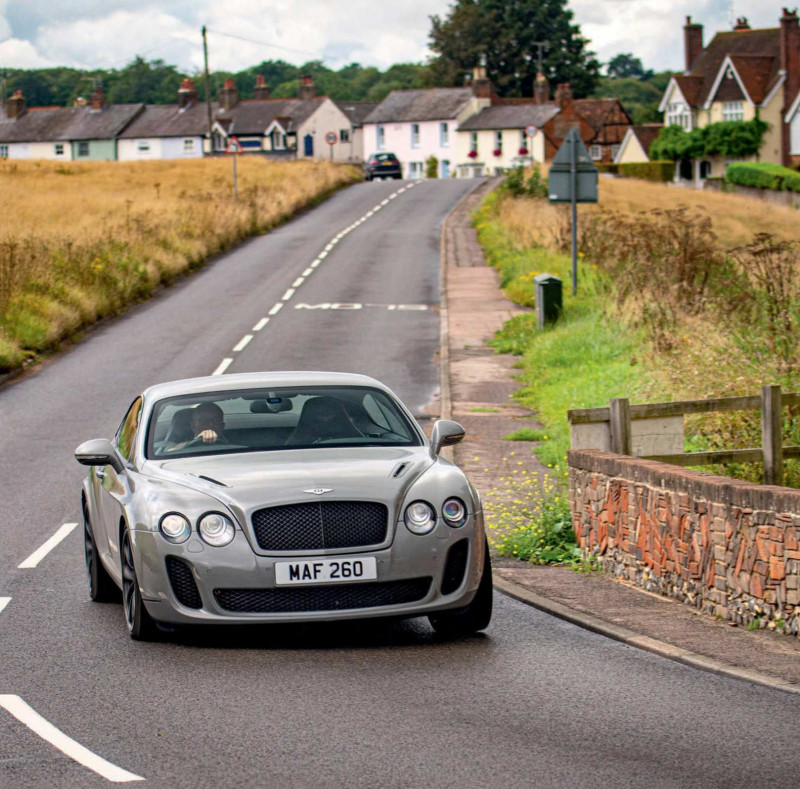 For Hertfordshire-based Mark Finnegan, however, his choice of modern classic just over two years ago had as much to do with its number of cylinders as anything else: “I want to make sure I’ve owned cars with just about every cylinder combination there is,” explains Mark, “and up until 2019 I’d not owned anything with twelve cylinders. I briefly considered a Jaguar XJ-S V12 before suddenly hitting on the idea of a W12-engined Bentley.”

As an ardent petrolhead, Mark had admired the Continental GT since the day it debuted just over eighteen years ago: “When the GT came out, I thought it looked good but a new one was way beyond my budget. To be honest though, I find the standard model a bit too soft for my tastes, so I suddenly hit upon the idea of buying a GT Speed. That’s until I discovered the Supersports after doing some research.”

Mark had suddenly found his ideal Bentley, a version that arrived late on in the first-generation model’s career… although the wait was well worthwhile. First presented to the world by Jay Leno at the Geneva motor show of 2009 and set to go on sale in the autumn, the Supersports was a limited-run model that took the Continental GT concept to a whole new level. With the aforementioned 621bhp on tap, this was the fastest production car that Bentley had ever built, with its near- 205mph top end being matched by a 0-100mph time of just 8.9 seconds.

And thanks to an array of chassis tweaks and suspension upgrades, it was as impressive in the corners as it was on the straight. Never before had a Continental GT been so hardcore, so uncompromisingly driver-focused. The more Mark researched the Supersports, the more convinced he became that this was his ideal Bentley, and so the search for a wellpreserved example began: “I found this one for sale with a dealer that specialises in prestige and sports cars. It had a sensible mileage and had obviously been very well looked after. It was an early car too, having first hit the road in December 2009.”

“The ordinary Continental GT coupé is impressive enough in the poke department, but this new one has its power boosted by 13 per cent”

Mark liked the fact that this particular Supersports was the two-seater version, one of just 103 right-hand drive examples built: “For me, it makes it that bit more special and unusual.” Also attracting him, however, was its launchspec colour of Quartzite, a metallic grey that seems to change its hue according to the light. After giving the car a thorough inspection, a deal was done and Mark became the latest owner of this Supersports in September 2019.

Any Continental GT is, of course, a rapid machine, with the kind of performance to satisfy most owners. But the 2009 Supersports took things further, with its tuned engine being complemented by an upgraded version of the ZF 6HP26A six-speed transmission (featuring a Quickshift set-up, claimed to reduce shift times by half), while a Torsen T-3 centre differential brought a 40/60 rear-biased torque split to the all-wheel drive system. The GT’s Continuous Damping Control was modified, the chassis geometry altered, the ride height was lowered, thicker anti-roll bars were employed, the rear track was subtly widened and carbon ceramic brake discs (an expensive extra-cost option on other models) were fitted as standard. The Supersports also managed to stand out from the crowd thanks to its bespoke alloys, unique bonnet vents, modified front air dam, automatically retractable rear spoiler, black headlamp rings and other aesthetic enhancements.

Proud owner Mark is also a fan of the Supersports’ interior treatment, which features a combination of leather and Alcantara: “The two-seaters are particularly interesting, as the carbon-fibre seats are the same as those fitted in the Bugatti Veyron.” 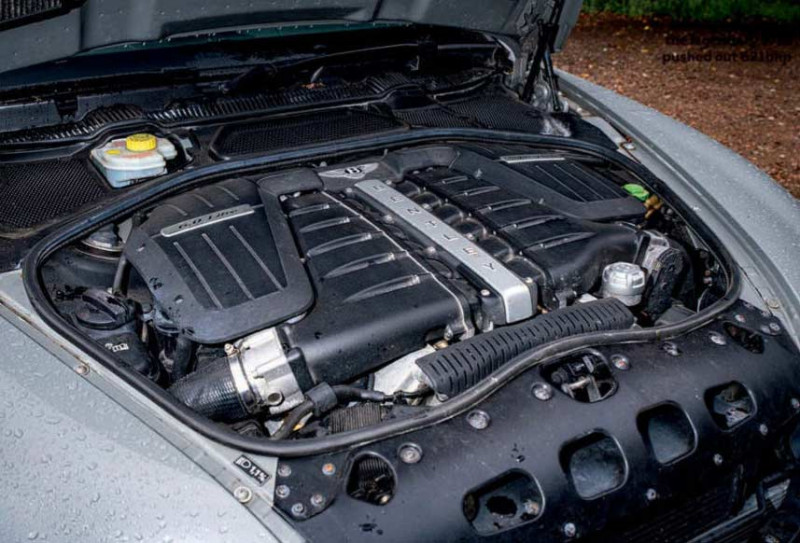 This particular Supersports has covered just 58,000 miles during its first twelve years on the road, and Mark isn’t afraid to use it: “For me, cars are built to be driven and enjoyed, not just tucked away in a heated garage. I don’t really understand investors who buy interesting cars and then never drive them. Where’s the fun in that?”

And, of course, immense fun is exactly what the Supersports provides, something that’s as true now as when the first production examples hit the road in late 2009. Back then, the British press seemed in awe of this new GT flagship, with renowned motoring journalist Steve Cropley kicking off his September 2009 road test in Autocar magazine with some bare figures: “On first acquaintance with the Bentley Continental Supersports, it’s hard not to be mesmerised by its power and speed. The ordinary Continental GT coupé is impressive enough in the poke department, but this new one has its power boosted by 13 per cent and its kerb weight cut by 110kg, which means its power-to-weight ratio jumps from 238 to 271bhp per tonne, its 0-100mph time is cut from 11.1 to 8.9 seconds, and its top speed climbs from 198 to 205mph. In short, the Supersports is as fast as any of us could want to go.”

There was – and still is – much more to the Supersports than sheer power, of course. In his test of the newcomer, Steve Cropley was equally blown away by its handling and grip, proclaiming that “this big, heavy car eats corners like 2200kg coupés almost never do”. While the Bentley could be made to understeer slightly on neutral-throttle bends, it was all beautifully controllable: “Give it big power in faster bends and you can make it tighten the line by increasing the slip angle of its rear tyres, without encouraging the admirably laissez-faire ESP to intrude unless the surface gets slippery or you’ve made a truly hideous miscalculation. Come off the power and it’ll restore you to the line you first thought of.” 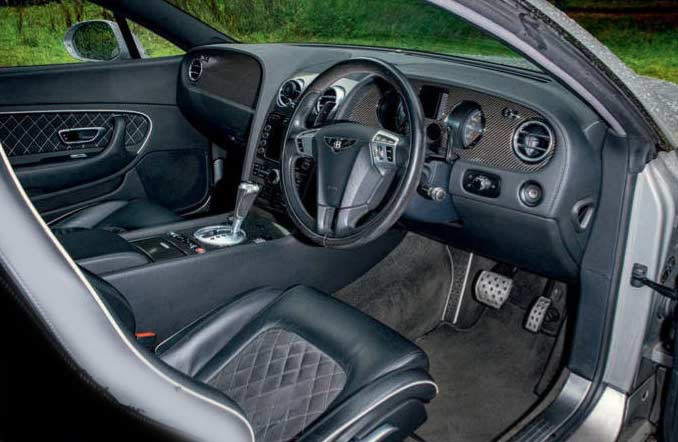 The drive concluded with perhaps the ultimate tribute from a tester as experienced as Steve Cropley: “By the time my stint at the wheel of the £160,000 Continental Supersports had ended, I hardly cared that this was ‘the fastest and most powerful Bentley ever built’. Why? Because the sensations in my hands, feet and rump were telling me that this Supersports was something even more important in the Bentley hierarchy. It was the best.”

A dozen years later, the Supersports remains a massively talented machine, one that’s just as happy pottering around town as it is blasting its way along an unrestricted autobahn or tackling the challenges of a winding A-road. And Mark Finnegan is one owner who isn’t afraid to drive his cars hard, as a quick glance at any of our cornering shots will testify. So, what’s the car been like to live with over the last two years? “An absolute joy,” grins Mark. “I keep my cars serviced and maintained well, which obviously helps with reliability. I had to have a new air-conditioning condenser fitted, and a power-steering pipe replaced, but other than that it’s been utterly reliable. Drive it now and you can really appreciate just how well-engineered these cars were when new. There’s not a rattle or a squeak, and everything still feels tight even after all this time. The quality of engineering really shines through.”

Given Mark’s penchant for Italian sports cars (having owned a succession of Maseratis and Alfa Romeos, as well as currently having a Fiat Coupe 20v Turbo project on the go), we couldn’t help wondering after a few hours in his company whether his dalliance with a Bentley would be short-lived: “I must admit, I do usually change my cars every couple of years, as I like to experience as many as possible while we’re all still allowed to do so. But there’s something about the Supersports… I can see me keeping this for a few more years yet.”

“Mark Finnegan is one owner who isn’t afraid to drive his cars hard, as a quick glance at any of our cornering shots will testify”

In Supersports guise, the legendary W12 pushed out 621bhp. Mark Finnegan has been a Bentley owner since 2019.

When Volkswagen took control of Bentley in 1998, it inherited the then new Arnage four-door saloon, as well as the two-door Continental R – a model that still used the old ‘SZ’ platform that dated back to the days of the Silver Shadow and T-series. What was needed was a new hi-tech model for the 21st century, a car that could show the world that Bentley was back… with a bang.

This arrived in 2003 via the Continental GT, a rakish coupé that cleverly combined the latest in VW Group technology with styling that was modern but with traditional Bentley overtones. The new GT had sharper dynamics than any previous Bentley, aided by a 6.0-litre W12 engine producing 552bhp. The Continental could sprint to 60mph in just 4.8 seconds before going on to a top speed of 198mph, while its clever air suspension (with continuously adjusting dampers) and four-wheel drive meant there was handling and grip to match. At around the £110,000 mark, the Continental GT even offered good value compared with Bentley coupés of old.

The GT was developed over the years, with 2004 seeing the addition of the Mulliner Driving Specification, an entirely cosmetic package that added bespoke wheels, two-tone leather and veneer combinations, drilled alloy pedals, quilted door and dashboard facings, and optional piano-black dashboard veneer.

The 2008 model year brought a minor facelift for the GT, which included lighter aluminium suspension components for an improvement in ride quality, while new multi-mode variable-assistance steering injected some extra ‘feel’ at the wheel. Big news, however, was the arrival of the GT Speed, with an engine tuned to 602bhp – plus a lower ride height, more powerful dampers and stronger anti-roll bars, as well as unique wheels and tyres, stiffer suspension bushes and other performance-related enhancements. The following year saw the unveiling of the GT Supersports featured here. A second-generation Continental GT range was launched in early 2011 (having made its motor show debut the previous year), this time bringing the option of a 4.0-litre V8 in addition to the big W12.

Owner Mark likes the fact that his Supersports is the rare two-seater version. The Supersports interior features leather and Alcantara, plus ex-Veyron seats.

“With 621bhp on tap, this was the fastest production car that Bentley had ever built, its 205mph top end being matched by a 0-100mph time of 8.9 seconds”