On a recent trip to Suffolk, we met up with the proud owner of this Early 1972 Rolls-Royce Corniche Fixed-Head Coupé, a car that represents the realisation of a childhood dream. Words: Paul Guinness. Photography: Matt Woods.

We take a trip to Suffolk to meet the owner of an early Corniche, a man who finally took the Rolls-Royce ownership plunge just four years ago

When we hear someone talk about how they developed a love of cars at a very young age, it often brings back memories of our own childhood. Car-spotting as a youngster is something most of us can relate to, an activity that can often influence our choices in later life. 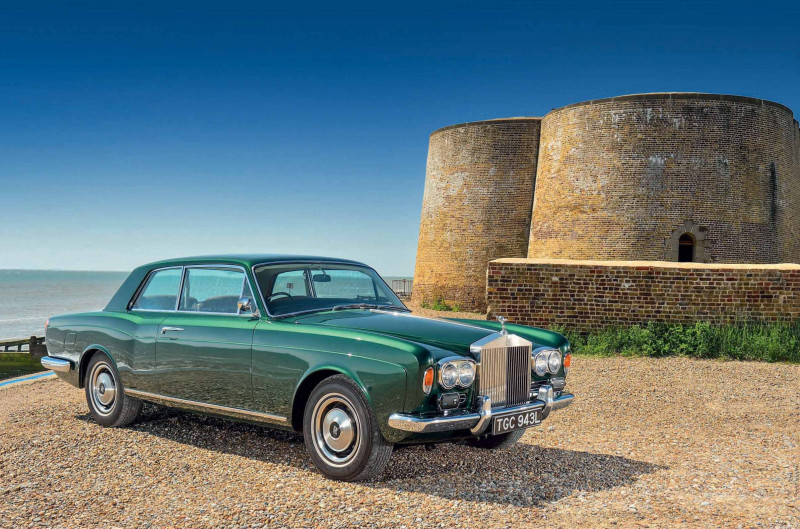 And for Gavin Hughes, growing up near London in the 1980s meant one thing: there was rarely a shortage of Rolls-Royces for him to admire, with England’s capital being the place you were most likely to see a secondhand Silver Shadow, a classic Silver Cloud or a brand new Silver Spirit at that time. “I had regular trips into the city with my mum and dad and used to spot all the Rolls-Royce motor cars and have my photograph taken standing next to them,” recalls 44-year-old Gavin. “I would visit the London Motor Shows at Earl’s Court with my dad and admire the amazing cars on display on the Rolls-Royce stand. I also remember visiting the showroom in Conduit Street, where I got to sit in a 1928 40/50 Phantom Sportsman Saloon.”

Needless to say, such experiences had an impact on young Gavin, and he became an avid collector of Rolls- Royce and Bentley models: “I amounted quite a collection over the years. I would even go to Hadley Green Garage in Barnet, a Rolls-Royce dealership, to admire the brand new models for sale and politely ask for brochures to take away, which I still have.” 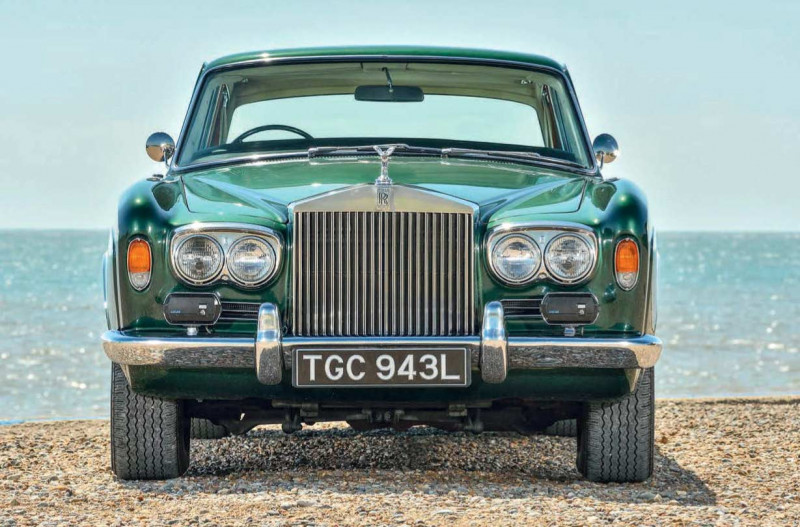 In adult life, Gavin’s ambition to one day have a Rolls-Royce of his own remained, but for many years it simply wasn’t a practical proposition: “I figured it was an unachievable dream as I lived in London with no parking. I contemplated an R107-series Mercedes-Benz SL at the time, but it didn’t seem right to have a classic car parked on a busy London street. Then in 2016 I moved out of London to rural Suffolk, to a house in the country with a very large garage. It was my dad who one day remarked that I could get a Rolls- Royce in the garage… and suddenly my childhood dream was re-awakened!” Choosing which Rolls-Royce to focus his attention on wasn’t all that much of a dilemma for Gavin: “I always thought the ideal car would be a two-door coupé as it would only be me driving it. I really wanted a car that I could use and which would look right around the country lanes and villages where I live. And I’ve always admired the styling of the Corniche.” The only real challenge was tracking down his ideal example, a process that saw Gavin joining the Rolls-Royce Enthusiasts’ Club and searching the internet for available cars. 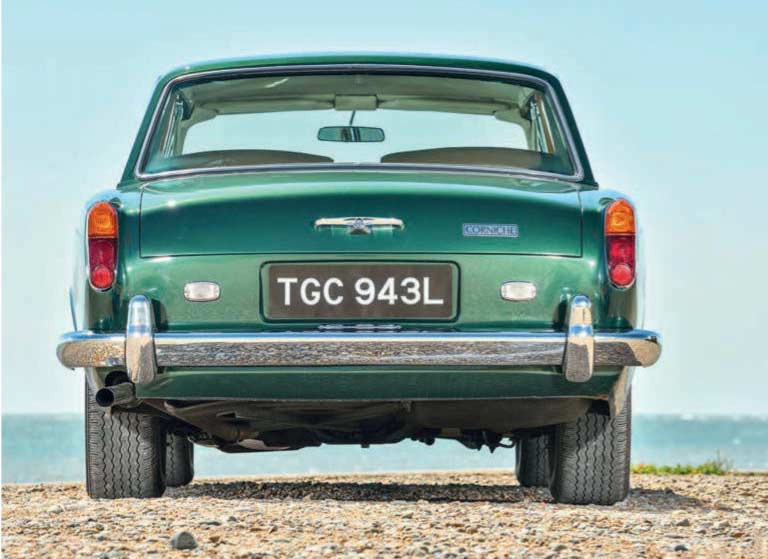 “My first test drive in a Rolls-Royce was via a lovely lady in the Midlands,” recalls Gavin, “although my buying decision was solved when the car sold a couple of days later to somebody else.” It was unfortunate, but at least the experience confirmed Gavin’s suspicion that a Corniche was the right model for him.

The 1972 example you see in the photographs was spotted for sale in the summer of 2017, advertised by a marque enthusiast who seemed very knowledgeable about the car and its provenance. As it was to be Gavin’s first ever classic, he took his time in making a decision, and very sensibly opted to have the Corniche inspected by a Rolls-Royce expert. Isleworth-based Nigel Sandell came to the rescue, giving the car a thorough check-over in his workshops, and the verdict was favourable enough for Gavin to make a decision by the October: “There were just a few areas that needed attention, as the rocker covers had a leak, the manifold heat shield needed changing, and the battery and tyres all had to be replaced.”

A 6000-mile service was also carried out before Gavin finally had the Corniche back home, as he wanted it to be usable and reliable from day one: “Nigel even agreed to deliver the car to me in Suffolk, as I’d only driven it a very short distance at that point, and I didn’t want my first real experience behind the wheel to be a trip around the M25!”

The history of this early Corniche is particularly interesting, with its registration date of 1st January 1973 making it a late-1972 build. It was ordered from Loxhams of Preston, a Rolls-Royce dealership that by then was part of the Dutton Forshaw Group and had multiple franchises throughout Lancashire selling the entire British Leyland range, including the prestigious Jaguar and Daimler marques. The company’s Rolls-Royce showroom took the order for the Corniche from a Mr J Cox of Manchester, a builder and real estate entrepreneur, who collected his new car at the start of 1973.

Sadly, Mr Cox passed away just two years later and the Corniche ended up in the showroom of Jack Barclay’s, which is where its second custodian first saw it. “This is where the history gets interesting,” explains Gavin, “as the new owner was Terence Frank Kennedy, an American author but more notably the widower of Marks & Spencer retail heir, Mathilda Marks. He purchased the Corniche a couple of years after his wife had passed away. Terence was a very wealthy man and lived at the exclusive Chester Terrace in London, but he spent time travelling to the South of France and Switzerland. I like to imagine the Corniche being kept in the mews in Regent’s Park but always ready to drive long-distance across the continent to Monaco and the South of France.”

Kennedy ended up living in Switzerland during his ownership of the Corniche, and so the car was registered there for a number of years. It returned to the UK in 1989, however, which is when it was re-registered with the DVLA. These days the Corniche looks rather different from when it was relatively new, as Gavin explains: “The car was originally finished in Astrakhan Brown with a tan-coloured Everflex roof – a classic ’70s combination!”

It was professionally resprayed and the Everflex removed sometime in the early 2000s, and the car is much more pleasing in its current hue of Balmoral Green with a hint of metallic. It’s an extremely well-preserved example and the highquality paint finish still impresses.

The Corniche has been in Gavin’s ownership for over four years now, having acquired the car in late 2017: “That was a big year for me, as I got married, turned forty, got a dog and bought a Rolls-Royce!” he laughs. “I named the car Joyce after my husband’s late grandmother, who would have loved to have been driven around in her. I also decided that keeping an Instagram diary would be a fitting way to document her history with me and for others to enjoy.” Any readers keen to follow the antics of Gavin and his much-loved Corniche should search @joycejoycetherollsroyce on Instagram.

Since buying his first Rolls-Royce – and his first ever classic of any kind – Gavin has been thoroughly enjoying the experience he waited so many years for: “We’ve been to every RREC Annual Rally since buying the car, as well as some charity shows. But what I really enjoy is simply driving the Corniche. I make sure she’s taken out at least every other weekend all year round, although she obviously gets more use during the summer. I’ve always been told that the best way to maintain these cars is to actually use them, and so that’s what I do. The driving experience is everything I’d hoped for – and more.”

“The history of this early Corniche is particularly interesting, with its registration date of 1st January 1973 making it a late-1972 build”

The Corniche had 38,000 miles on its odometer when Gavin bought it (he assumes the true figure was 138,000), and it’s now showing 43,000. As with any classic, however, there are various jobs that Gavin hopes to attend to over the coming months: “The rear subframe mounts need attention, so she’ll be going to Tudor & Black – the company that I now use for my servicing and maintenance here in Suffolk – to get this sorted next year. Oh, and I’d also like to have some re-chroming done at some point. Other than that, I’m simply working my way around the car ironing out any minor imperfections, such as reinstalling an original-type eight-track player where there’s currently a later cassette player.” 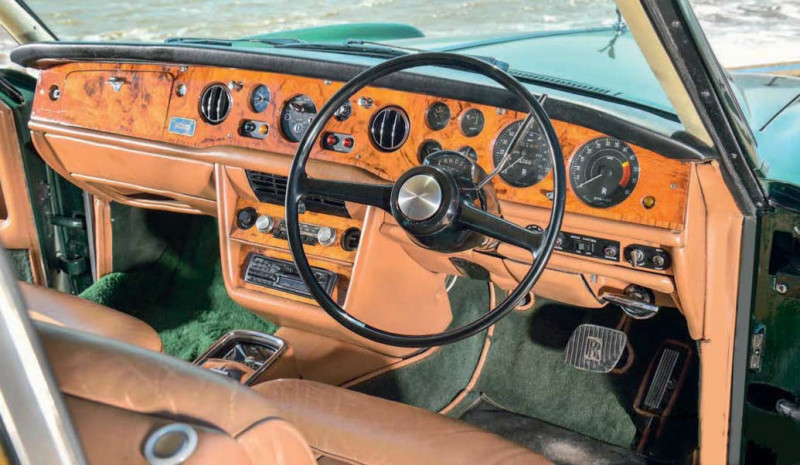 Joyce the Rolls-Royce is very much a keeper as far as Gavin’s concerned – a car that he waited so long for, he now can’t imagine being without. Almost half a century on from its first official on-road excursion, this Corniche continues to delight its latest custodian.

Although both versions of the Corniche – the fixed-head coupé (FHC) and convertible – arrived in 1971, they were little more than mildly updated versions of the previous Silver Shadow twodoor by Mulliner Park Ward. The modifications were useful, however, with the famous V8 engine now boasting 10% more power, while the interior was reworked with some extra wood, a rev counter and new-style centre console. The radiator grille was made deeper and new wheel trims were fitted, which also aided brake cooling.

The upgrades continued throughout the Corniche’s career. In 1977, for example, the bulkier (and arguably less attractive) shockabsorbing bumpers of the Silver Shadow II were adopted, along with the same front air dam, slightly flared wheel arches, rack-and-pinion steering and enhanced suspension. Then during 1979 the rear suspension from the forthcoming Silver Spirit was implemented, notably improving the Corniche’s road manners. With the 1980 launch of the Silver Spirit marking a major change of style for Rolls-Royce, the following March saw the end of the Corniche FHC, which by then was priced at £62,000. But the convertible (costing an extra £4000) continued, eventually becoming one of the longestlived of all Rolls-Royce models.

“The car was professionally resprayed in Balmoral Green and the Everflex removed sometime in the early 2000s, and it now looks much more pleasing”

The interior of Gavin’s Corniche is very well-preserved, with only the cassette player being non-original. The car was given a thorough pre-purchase check-over by marque specialist, Nigel Sandell.

The Corniche featured here was ordered from Loxhams of Preston, a Rolls-Royce dealership that by the early 1970s was part of the Dutton Forshaw Group. The company had multiple franchises throughout Lancashire selling the entire British Leyland range, including the prestigious Jaguar and Daimler marques. The company’s Rolls-Royce showroom took the order for the Corniche from a Mr J Cox of Manchester, who collected his new car at the start of 1973.

Gavin Hughes developed a fascination for all things Rolls- Royce at an early age. As a child, he would regularly have his photograph taken next to the cars parked in the street, spotted by him during family trips to London. “I would also visit the London Motor Shows at Earl’s Court with my dad,” recalls Gavin, “admiring the amazing cars on display on the Rolls-Royce stand.”

“In adult life, Gavin’s ambition to one day have a Rolls-Royce of his own remained, but for many years it wasn’t a practical proposition”