The quickest current-gen Continental GT is also the most fun

I never quite got my head around Newton’s third law of motion at school, partly because our teacher explained it by saying, ‘If you push against a wall, it pushes back with the same force.’ I asked: ‘But how? How does the wall push back?’ ‘Well, it just does.’ At which point my younger self decided both sir and Sir Isaac Newton were talking nonsense. Which might have held me back a bit in my exams. 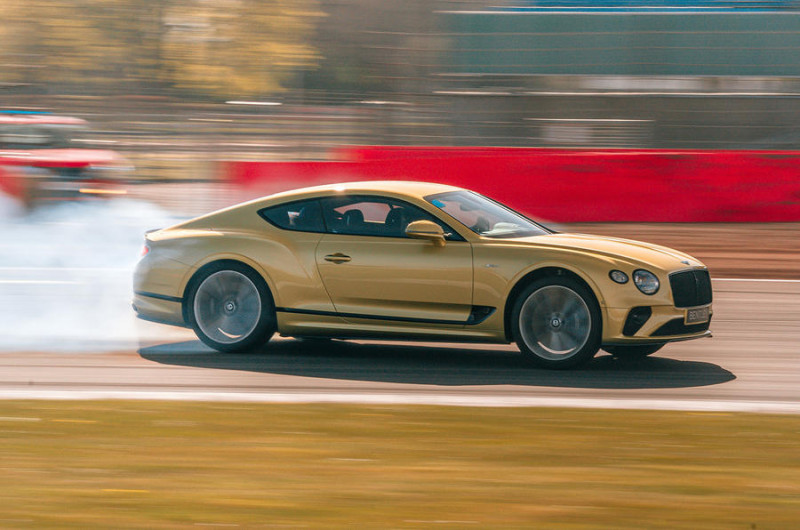 Seems Bentley can also show a blatant disregard for the laws of physics, because this Continental is gleefully attacking Silverstone in a manner which shouldn’t really be possible in a 2.3-tonne GT. I’ve just turned into the mega-quick Maggots/Becketts esses at three figures plus change. Not only does the Bentley tuck its nose in eagerly, through the tricky transfer in the middle of the complex it’s balanced, adjustable; balletic, almost. All the more impressive given it’s on standard (if gigantic) Pirelli P Zeroes, not special track tyres.

First things first, the Continental GT Speed isn’t a trackday car; it’s not pretending to be a 911 GT3 rival, and it’s still a big grand tourer first and foremost. We’re at Silverstone partly because the Speed’s not yet homologated for the road in the UK (but will be before long) and partly because it’s a safe environment in which to explore what it can do. That’s brave on Bentley’s part: most heavy road cars fall apart dynamically on a circuit within a lap or two. But the engineering team behind the Speed are proud of it.

They describe the Speed has having the most advanced chassis yet fitted to a Conti. It’s gained rear-wheel steering, as seen on the Flying Spur, helping it dive into slow corners more eagerly and stabilising the car in the quick stuff. An electronic limited-slip differential (a first for Bentley) works in tandem with the active all-wheel drive system, which becomes more rear-biased than ever in Sport mode. The regular Continental GT, which does without the rear-steer, e-LSD and other goodies, has a conservative set-up. But the Speed’s more nuanced electronics have allowed the engineering team to make it more playful. With slightly heavier, quicker power steering it’s more tactile and, with clever stability control allowing the car greater freedom to move around beneath you, it’s more involving. This is a first impression based on a limited number of laps, but you sense much of that engagement and involvement will come through on the road too. This could well be the most tactile, rewarding Bentley driver’s car since the Blower Bentley.

Squeezed under the bonnet like a ship in a bottle is the 6.0-litre W12 engine that’s been part of the Continental GT family since 2003. In the Speed it turns out 650bhp (although Bentley insiders say they’ve seen 700bhp+ in testing) and, more to the point, 664lb ft on a table-top torque curve from 1500 all the way to 5000rpm. This makes this car feel thumpingly fast on Hangar straight – 160mph comes and goes with laughable ease – and if Stowe corner wasn’t in the way it would keep pulling to 208mph. But the good news is that the Speed is more than just some leather-lined straight-line dragster; it’s similarly speedy, and enjoyable, in the twisties too.

The regular Conti GT can do great things but it is not an out-and-out driver’s car. On first impression, the Speed is different

1 minute Optional Julep paintwork like the suit in The Mask, loud but likeable

16 minutes Glad I’m not paying for the tyres

54 minutes Aside from being the most powerful Conti, the Speed’s also the most involving and tactile on track. Hope that translates to the road

PLUS + The most dynamically Involving modern Bentley yet

MINUS — You’ll need to budget for tyres

160mph comes and goes with ease. If Stowe corner wasn’t in the way it would keep pulling to 208mph.A lot of grilles going on, but then there’s a lot of engine behind them to keep cool.