Sixty years ago, Ferrari unveiled the 250 GTO, a road-usable racer that went on to become the world’s most desirable car. Doug Nye reunites with an old friend.

We drive the ‘king of cars‘ 60 years after its Sebring debut Plus From also-ran to world’s most valuable classic car: The full story of Ferrari’s road-racer

Sixty years ago, a car regarded, by many as the greatest road racer of all time was launched. And this month – March 1962 – it made its competitive debut on the track. It was the start of a journey for the Ferrari 250 GTO that would help it become not only the world’s most valuable collectors’ car but also acquire a mythical aura that means today it stands alone in the pantheon not only of Maranello’s fabled racers but also among all classic cars. 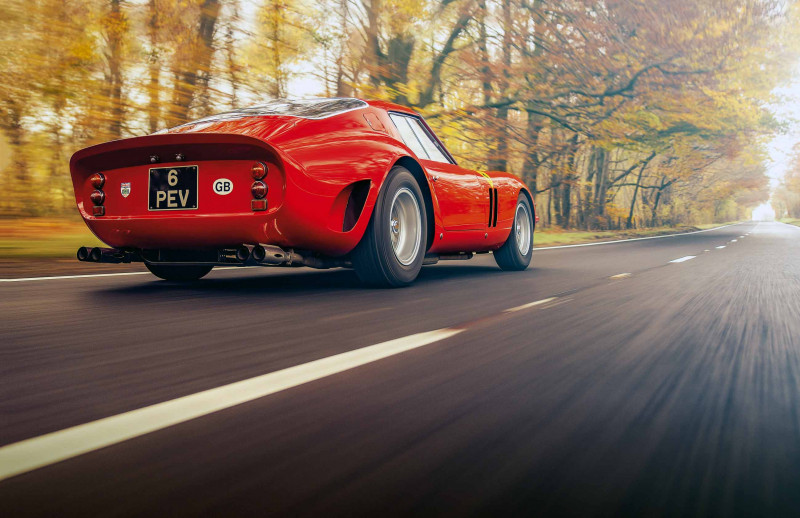 One of the reasons for this is its rarity: only a handful of unmolested examples still exist. And so test-driving them to experience their uniqueness is destined to remain a dream of all but a very fortunate few.

That is why I count myself lucky to have spent many hundreds of happy miles of hard motoring in 250 GTOs. The car photographed here has been owned for 40 years by ex-racer Paul Vestey. We have shared it many times on the classic Adelaide Rally, at Goodwood and just stretching its legs on the road. Its chassis serial is 4115GT, sold new to German enthusiast Hermann Cordes. He made his hillclimb debut with it in March 1963, won a minor race at Hockenheim, ­finished second at AVUS and then sold it to an extraordinary playboy/architect named Manfred Ramminger.

Through 1964 Ramminger (great name for a racing driver) drove it to minor class wins at Mainz-Finthen and AVUS before selling it for ’65 to Werner Lindermann from Duisburg, who won his class with it in minor events at the Nürburgring and AVUS, and shared it with Ramminger for second in class (and 23rd overall) in the ADAC 1000Kms.

Ramminger was later convicted as a KGB agent, who in 1967 stole a Sidewinder missile from a German/US airbase and freighted it to Moscow. Having pushed it on a wheelbarrow to a hole in the fence, he loaded it into his Mercedes estate, found it was too long to ­it so he smashed the rear screen and left the missile’s nose protruding. He then draped a piece of carpet from it as a marker flag, to meet German traff­ic law…

From him, 4115GT had passed to Swiss owner H.P. Burkhardt, then to Bob Roberts for his Midland Motor Museum at Bridgnorth, Shropshire. Neil Corner bought it in 1978 and sold it to mutual friend Paul in 1981, since when he has preserved, and used it over more than 50,000 miles. 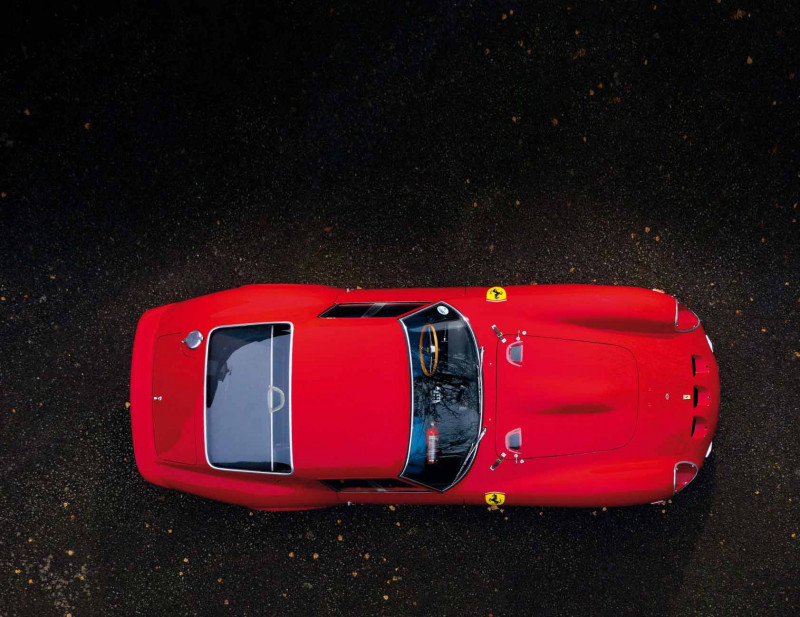 So, with a 60 year life well lived behind it, let’s drive 4115GT. The GTO door opening is quite conf­ined. For a proper-sized chap it’s a squeeze to enter. The door catches have a tiny pull tab under the latch button. You squeeze the button with your thumb, crooking the tab in your index ­finger and the door swings wide, obviously lightweight aluminium panelling, black-trimmed within. There’s quite a spacious door pocket for maps, road-books etc, a chromed pull handle and a latch cable — just like the original Mini Minor.

“Pulse quickens. Noise is deafening. There’s a rising note, it seems inside your head, a resonant growing yowl”

In this left-hand driver it’s best to slide your right knee ­first beneath the wood-rim steering wheel, otherwise there’s no room to load your legs later. The blue-upholstered bucket seat’s raked back ­its comfortably beneath shoulder blades. It’s quite a squeeze to settle knees-high behind the famous, thin, wood-rimmed steering wheel with its yellow and black Cavallino Rampante badge, but once ‘in’ it’s actually very comfortable. Snap-shut the four-point belts. The pedals are slightly offset to the left, towards the outside of the car, while one’s torso faces dead ahead. In most cars the pedals are eased to the right to clear an intrusive front wheel-arch but in the GTO you sit well back within the wheelbase. Its foot-box is behind the front wheel-arch while the seatback is hard against the front of the rear wheel-arch. Together with rearward-mounted engine and gearbox, the driver’s (considerable) mass is as centralised as possible. 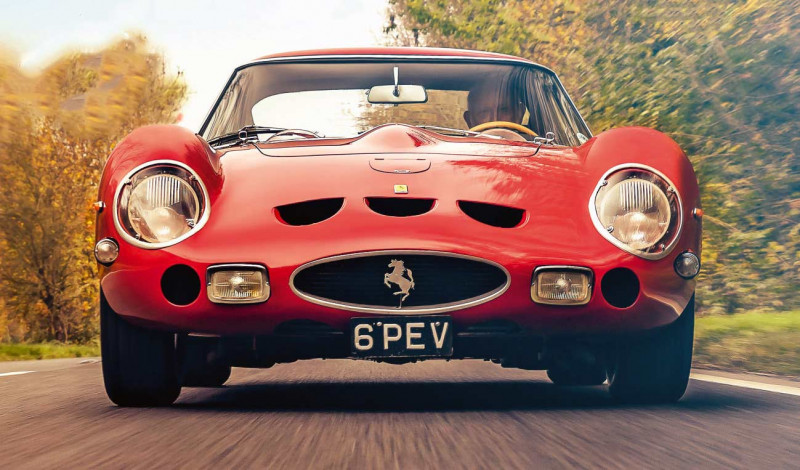 Look around. The two-piece sliding side windows are perspex, the shapely sharp-raked windscreen laminated glass. The gearchange gate, boxed high on the centre tunnel with that majestic arching one-armed bandit lever and machined ball-grip, utterly dominates the cockpit. It invites instant use. The movement is long, some f­ive inches fore-and-aft, but it is incredibly positive, minimal free movement, and it is spring-loaded into the centre plane of the six-point gate.

From the left-hand driving position reverse gear is selected towards the driver, the slightest press against a spring and forward, then ­first gear straight back, lower left. Second is forward, across, centre-plane, forward again – a diagonal punching movement. Third straight back, fourth punch forward and across, ­fifth straight back. With thumb hooked around the steering-wheel rim the tip of my index ­finger at full span can reach the gearknob. That high gearlever emphasises the impression of sitting low, almost reaching ‘up’ to change gear.

Instruments are perfectly placed. All-round vision is very good though bad blind spots are created by the quarter panels, embarrassing from the left-hand driving seat at British roundabouts and angled junctions unless one positions the car carefully. Now – action! 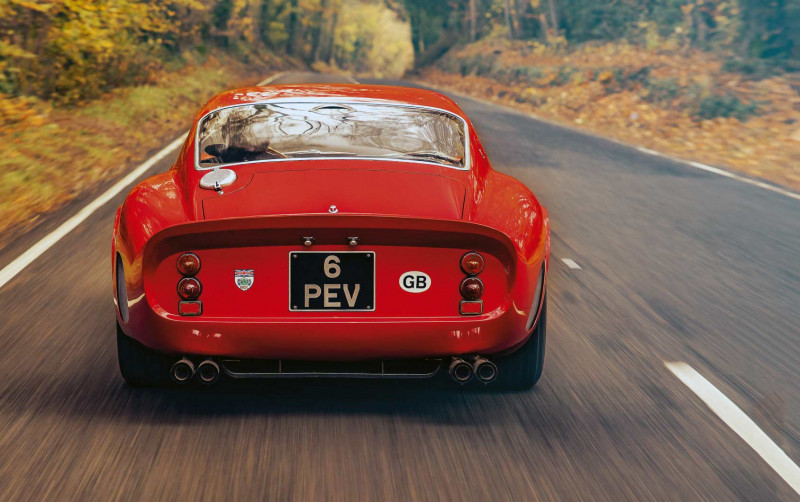 The ignition lock is to the right of the dash on the facia switch panel. Pump the throttle. Turn the key, warning lights gleam; push in key, starter engages. It sounds more like an aircraft than motor car start-up – a powerful, level whine as those 12 small pistons shuttle through their stroke, twin distributors just there beyond the f­irewall spark their plugs and Ferrari’s world-famous two-cam V12 crackles into extrovert life. The GTO is noisier inside than out. Toe the very light and smooth clutch, clack back into f­irst gear, draw away. Accelerate, punch into second, a one-arm bandit yank back into third, punch to fourth, pull to f­ifth… and it’s a case of “Hello old friend – how are you doin’?”.

On the road the GTO is pleasantly tractable and – despite its noise and by modern standards unref­ined vibration (which in fact any red-blooded driver has just got to love) – it is civilised, if never unobtrusive. That nerve-tingling racket of cam drives and meshing gears and blustering exhaust ­ills the cockpit. Conversation with a passenger is challenging, even at mimsing speed. Perhaps its most delightful single feature – other than that dominant gearchange in its exposed gate – is its light and progressive clutch, closely followed by the steering which is light and full of feel without undue kickback.

The minimalist cockpit is dominated by the ‘one-armed bandit’ gearlever with machined ball grip.

But undoubtedly the heart of any period Ferrari is that V12 engine; a staggeringly impressive piece. Picture yourself sitting there, gearchange high to your right, that ergonomic dash panel dead ahead; and beyond, through the raked screen, those voluptuous hand-formed swells and rolls of the bonnet, ‘power bulge’ and wings. Cruising onto the open road in fourth gear, perhaps 40mph, feathered throttle, engine grumbling, like a high-powered piston f­ighter plane just taxiing.

On a delicate throttle the car will accelerate smoothly from around 2500rpm. Clear road ahead – OK, it’s time. Pull lever back, neutral, to you and back again for third – and floor the throttle. Passing through 4000rpm – nothing immediately sensational, just a progressive forward surge. But don’t think that, after all the fuss, this is ‘only’ a 60-year-old 3-litre V12. As yet you haven’t scratched the surface of its capabilities.

The f­irm ride smooths as the Ferrari’s speed rises. Then the tacho needle reaches vertical, 5000rpm, and it’s almost like throwing a switch. Power surges in – not abruptly, not the explosive charge that a modern might provide, but just a rapid, relentless strengthening of the surging push in your back. That sharp V12 song from the SNAP extractors abruptly hardens. It develops a heavy creamy burr and your neck begins to bend. Now the hedgerows are flashing past. Pulse quickens. Noise is deafening. There’s a rising note, it seems inside your head, a resonant growing yowl. And the plastic side windows have started to chatter. At 6000 the GTO’s tail feels tucked down although its hard suspension and ­firm damping in fact allows little squat. Now it’s accelerating like fury, the tacho needle swinging rapidly past 6500 to 7000. Change up, punch forward and right, the lever snaps helpfully into fourth.

The woodrim clasped lightly in your left-hand ­fingers is singing to you, that exultant race-bred V12 note has cut clean as your toe paused the throttle, then as fourth clacks home it hammers on again with instant response. The faster you feed the V12 the hungrier it feels. Everything within GTO-world smooths into a galloping, creamy, sensory overload. The car seems to hunker down – perhaps an aerodynamic effect – its ride polished.

Plainly we are on planet GTO. And almost instantly you are passing six-plus in the meat of the torque curve and the needle is soaring. The road is blurring past, and approaching 7000rpm – the noise!

It’s a rippling, resonant howl, f­illing the cockpit, and the skin on your cheeks is shivering in sympathy. The note catches for a second, that’s the change to ­fifth and still it’s accelerating and the tacho needle is swinging and this is fast enough. You’ve been there. Proper drivers – a proper track – on up to 8000rpm, 170mph and beyond beckons. Here in this lovely old lady is the antithesis of any whining electric car.

When I ­first drove a GTO 40 years ago I wrote that “…the din is indescribable and earplugs are a must”. Now deafness renders them unnecessary. But how, without intercom, Tour de France rally navigators spoke to their drivers I have no idea. That engine feels unburstable. The gearbox instils such con­fidence it could almost be muttering “Le Mans 24 Hours” or “Tour de France” as it encourages use. The all-disc brakes are reasonably powerful by 1962 standards but not unduly impressive now. At my driver level the chassis’ handling always impresses me as very stable and responsive, well-tuned and sensitive to throttle opening and input from that wonderfully sensory steering. In tighter turns it’s very easy to induce initial understeer but just as easy to balance it out on the throttle. It all just feels well-balanced, willing, helpful – the GTO is your partner, not an adversary.

The lines of the car were derived partly from wind tunnel testing, while sports car experience added the rear spoiler. The music section: its 3-litre V12 was equally at home on public road or track.

My most vivid single GTO image is of driving at night along the fast, sweeping A303 country road, the amber headlights probing the darkness ahead and the sweeping ‘lazy-M’ prof­ile of that famous bonnet silhouetted in their glare. That image, and the 12-cylinder noises, and the short neck-hairs-bristling balance of that classically vintage chassis through 70‑80mph S-bends, and the car’s deepchested muscular pace as it catapulted up long steep hills, and the baritone whoops of down-changes through the night on dry, empty roads has always lived with me. Make no mistake, there is real substance to the GTO legend. Except for the fact that, despite all their winning, 1962‑1963, they didn’t beat much of any importance – never otherwise doubt it. In the 250 GTO – perhaps more by happenstance than intent – the planets simply conjoined. And that is why the legend lives. 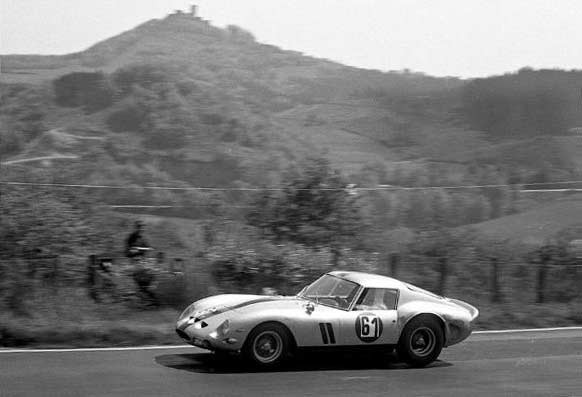 4115GT at the Nürburgring 1000Kms in 1965, driven by Werner Lindermann and KGB agent Manfred Ramminger. 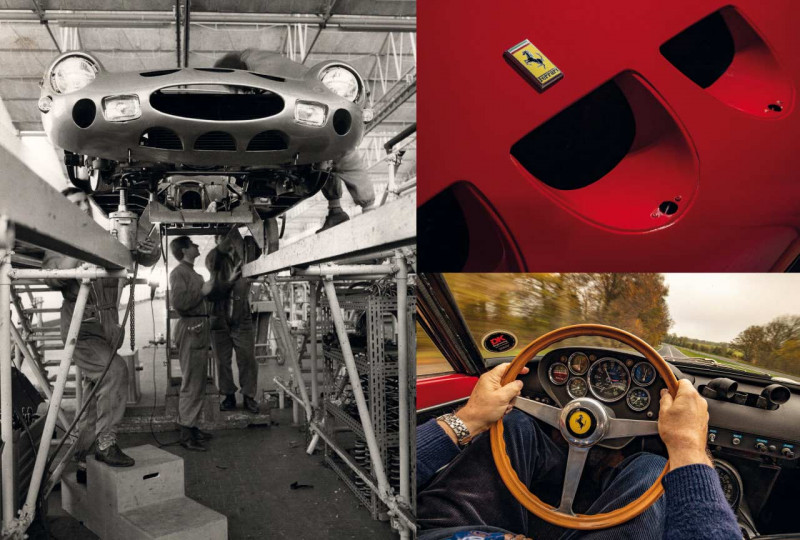 Nose-top hatches detach for extra cooling. Left: 2400mm wheelbase was derived from the 250 GT SWB. Below: wood-rim and prancing horse. Doug applies the revs in a car that is almost 80% of the price of a new Boeing 737.