If you’ve ever dreamed of a romantic Valentine’s weekend getaway, chances are that dream has evoked a classic Italian convertible of some description, even if the dream doesn’t exactly materialise as intended. After all, Enrico Salerno attempted to give his wife a jolly good time in Rimini in an Innocenti 950S, but sadly ended up spending it alone in Weekend, Italian Style. Some years later, Christopher Reeve parted company with his girlfriend and, overwhelmed with grief, drove from Chicago to Mackinac Island in his Fiat 124 Sport Spider. Once there, he promptly mesmerised himself back in time 70 years to meet his Dulcinea whom he’s quickly separated from again in Somewhere in Time. Dustin Hoffman may have pulled it off most successfully in The Graduate but it was by no means an orthodox route, traversing his Alfa Romeo Duetto Spider via the art of seduction at the hands of an older woman, consequently running out of juice, and ultimately sprinting on foot to the church to salvage his sweetheart from an arranged marriage.

These scenarios may well be unnerving metaphors for the likely ownership experience of such cars, as reliability of their fidelity was never a given. However, they garner an etched place in our hearts, and several of these cars did so in production for many years, including the Fiat 124 Sport Spider which should have adorned these pages in issue 8, current throughout February, that most romantic of months. But that pesky Dan Adler muscled in with his Your Classics entry, knocking back my column by an issue, knocking everything out of kilter. Ah well… 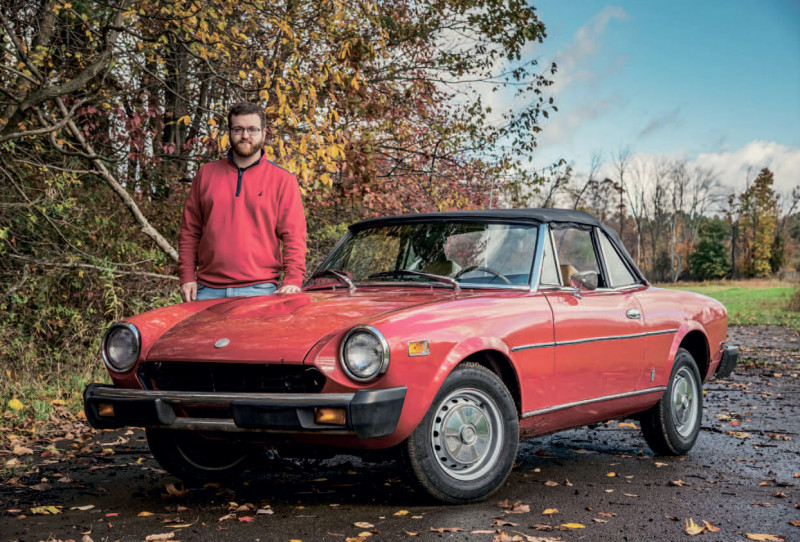 Introduced in 1966 alongside the 124 saloon, the Sport Spider featured a low-slung, extraordinarily attractive body massaged by coachbuilder Pininfarina. The bold headlights and slimline front sidelight/indicator clusters also gave it a slightly shrunken E-type appearance, had you been under the influence of a combination of the aphrodisiacal qualities of rose petals and alcoholic qualities of Aperol Sours. Nonetheless, it was both evocative and alluring. Under the bonnet sat a dual overhead camshaft 1.4-litre powerplant with a crossflow cylinder head; its incomparable charms outputting some 89bhp at a heart-fluttering 6000rpm. A slightly detuned version of this engine would later appear in the Special T saloon.

Over the years, those cylinder capacities and power outputs would increase in virility; by 1970 this had increased to 1.6 litres and by 1973 a 1.8 was standard fare, pumping 116bhp via the sexiness of its Weber carburettor… in Europe. In the US, however, governmental anti-smog legislation enforced mechanical birth control by sapping power by more than 25%. That said, the Spider also put claim to the first Abarth-powered Fiat following its purchase of the racing company in 1971, gaining 126 horses coupled with such delights as all-round independent suspension and a rigid bonnet. 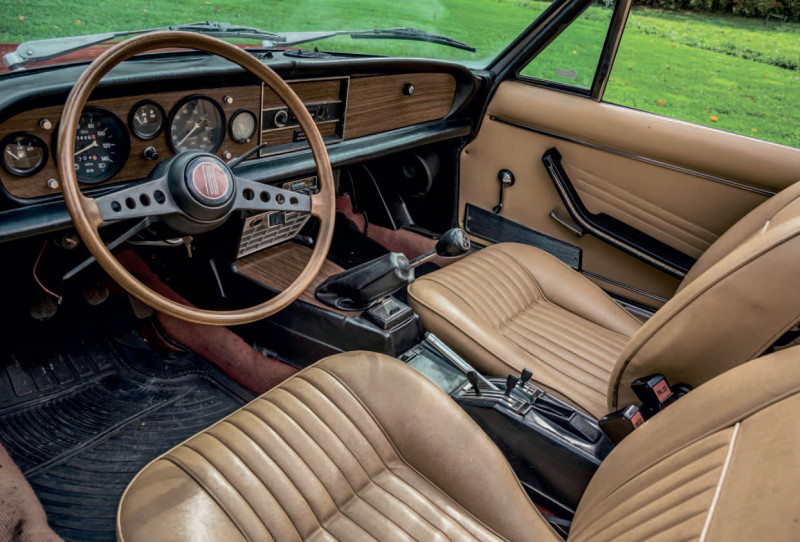 Dominic Righetti’s 1978 Sport Spider 1800, featured here, is one of the final models to boast a carburettor; the following year engine capacity increased again to 2.0-litres, and the year after the Weber gave way to Bosch L-Jetronic fuel injection. Righetti, an automotive parts store manager from Salem, Ohio, hails from a family of staunch Mopar enthusiasts who have found a bold, adventurous new enthusiasm for Fiat since it took control of Chrysler in 2014. While performing research for his first classic car venture, Dominic thought about the new 2016 124 Spider and its relationship with the Mazda (MX-5) Miata. This then led him into the realm of Italian cars in general – being of Italian heritage himself – and specifically the classic 124 Sport Spider, and he began scouring the classifieds. He soon encountered this beautiful example finished in Cherry Red coachwork replete with reupholstered biscuit leather seats. Wood adorns the entire fascia and steering wheel. The manually retracting soft top is also new. It’s undeniably Italian and extraordinarily chic. It’s also very much a working classic, with numerous minor cosmetic foibles here and there, but also one which is well-maintained with a small flurry of receipts. With the car’s minimal rust and attaining a knowledge of the car’s history, he bit the bullet and took his apprehensive first steps into classic Italian sports car ownership.

The North American cars post-1973 were saddled with the emissions equipment which had been imposed following the Clean Air Act of 1970: a single, twin-choke, Weber 34 carburettor and the engine delivering just 86bhp as opposed to the European model’s 116bhp. Dominic’s initial plans are to retrofit a dual-Weber 44 unit as used on the Abarth and remove the smog equipment, thereby increasing the power by some 40 horses and giving the car a very different feel. 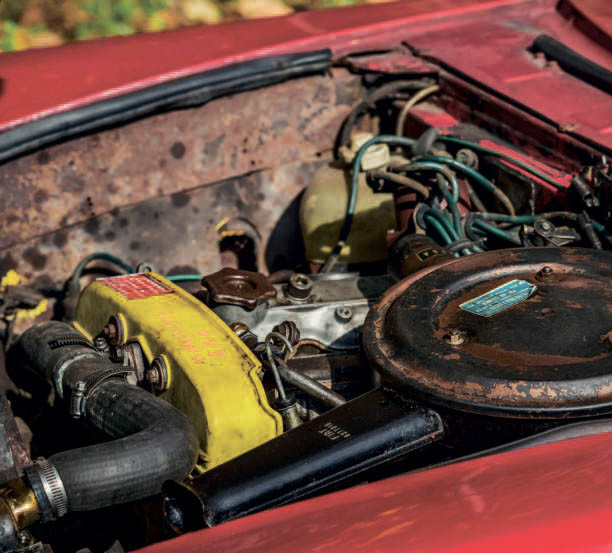 In 1982, Fiat decided that its handsome Romeo was simply too long in the tooth and put it out to pasture, thus terminating the romance. However, the car’s ménage was salvaged by Pininfarina which decided to woo the car to market by building it itself; Fiat pulled a similar trick with the X1/9 and Ritmo Cabrio after losing interest, leaving Bertone in both cases to undertake the build and marketing.

The Sport Spider thus became known as the Spidereuropa and Spider Azzurra, depending upon where you wanted to marry, although sadly the relationship wasn’t a long-term affair, and the era of unbridled romance ended in 1985 when the decree absolute was sealed. However, this wasn’t before the car featured its final fling – in Europe at least – with a Volumex supercharger developing 133bhp. Despite the contraceptive-sounding name, the Volumex wasn’t made to last longer and suffered the same determinable rust issues as all other Sport Spiders did. The car’s 19-year production run resulted in some 172,800 offspring, of which 16,100 were built for the 1978 model year. Dominic did offer to run me out for ice cream, but I feared he’d become an unwelcome talk of the town had I donned my Bridget Jones head scarf. Instead, we savoured the delights of a terrific autumnal day, and I donned my Nikon DSLR. Christopher Reeve probably wished he’d opted for that scenario, thus saving him many decades of heartache.

“Dominic Righetti’s 1978 Sport Spider 1800, featured here, is one of the final models to boast a carburettor”