No budget, no time constraints, no prisoners: the 1989 Lexus LS400 XF10 was Japan’s shock to the world that changed the luxo sedan segment forever.

Build the best car in the world. That was the brief from Toyota president, Eiji Toyoda, to a crack team of 4000 highly talented staff for the new ‘Circle F’ project – ‘F’ standing for ‘flagship’. It was August 1983. By 1991, that team could lay claim to a brimming trophy cabinet including Wheels Car of the Year after it achieved the unthinkable: it beat the Germans with the ground-breaking Lexus LS400. “As a luxury car it’s almost faultless,” said our introduction to our 1991 Wheels COTY. Editor Phil Scott described the LS400 as, “The closest automotive equivalent to a Rolex watch there is.” Other judges from our 1991 COTY were just as effusive. These included Michael Stahl, who said,“Hadn’t expected the communicative ride and steering or the Lexus’s roadholding abilities.” Legendary racer Kevin Bartlett described the four-speedas, “The best automatic I’ve ever driven.”

Circle F achieved the inconceivable for a Japanese carmaker: it cracked the US luxury market. Jaguar had waned. Audi was on the up but not yet in BMW’s league, and all were chasing the clear benchmark, Mercedes-Benz. Honda launched Acura in 1986 with its Legend – sold in Australia wearing Honda badges – but it hadn’t made a significant impact against the German marques. To achieve that, you’d need a genuine game-changer.

Circle F was tasked with creating a rear-drive sedan boasting a set of attributes never previously achieved. Codenamed ‘F1’ for ‘Flagship 1’, the best car in the world had to have the highest possible levels of safety yet be lightweight. It had to be fuel efficient to avoiding the US ‘gas guzzler’ tax, yet approach 250km/h. That would make it the fastest Toyota ever, with only the Supra capable of more than 175km/h at the time. That demanded aerodynamic efficiency, while it had to cosset passengers in sublime quiet. Chief engineer Ichiro Suzuki was unrelenting in achieving this fantastical target. On paper, it was a set of seemingly impossible parameters, so much so Toyota’s product engineering director, Akira Takahashi, initially distanced himself from the project. In fact, Takahashi told Suzuki that he was out of his mind. Yet Suzuki would not be swayed. “I couldn’t compromise,” he said. “If I did, then it would be just a normal vehicle.” 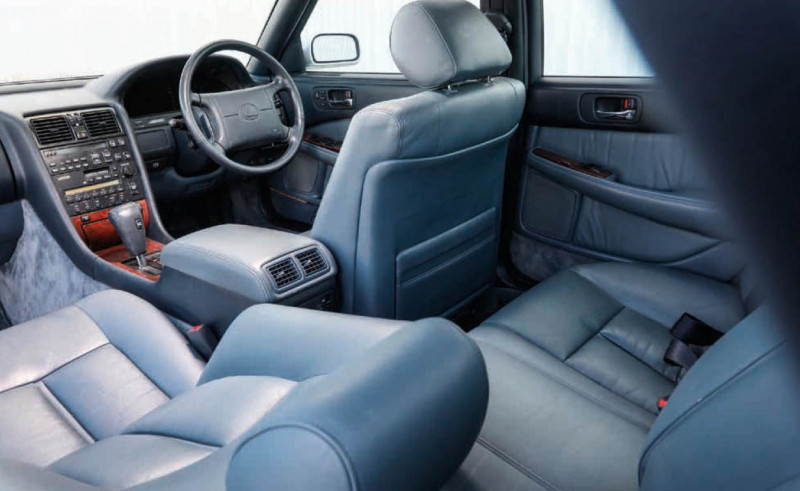 Galvanising Suzuki’s determination was an effectively unlimited budget; the final bill would total US$1billion. Such significant investment would bring greater reliability and mean Toyota would barely have to spend on its maintenance network. More critically, with the higher profitability of luxury models, the ‘F1’ was a ticket to greater revenue in the wake of reactionary US quotas imposed across all Japanese carmakers in 1981, the result of Japanese models taking significant market share from The Big Three during the oil crisis.

Beyond this, such a large investment was scalable as an exploratory study of design, engineering and mass production to the utmost standards. In building the ultimate car, Circle F was schooling itself, and more broadly Toyota, in how to become the ultimate car manufacturer.

Ahead of Frankfurt 1987, Toyota announced it was establishing a luxury arm to capitalise on the segment’s growth as baby boomers entered their ‘peak earning’ years. It had previously dabbled in higher-spec models, even opening a dedicated showroom in Beverly Hills, Los Angeles, for its Crown model. Domestically, it produced the Century from 1967 – a long-wheelbase ‘VIP’ limousine based on the Crown for Japan’s parliamentary motorcades. Luxury cars are more than just size, though: there’s status, too.

The perception of Japanese cars as econoboxes meant the ‘F1’ couldn’t wear the Toyota badge. Research of luxury car owners across North America showed badge envy was a significant buyer motivator; Toyota was not going to win a prestige punch-on with Mercedes. A new approach was needed. That’s how Lexus was born – revealed for the first time at the LA show in 1988; a brand worth US$10.2 billion today.

Debate continues over whether the new brand name was a cheeky acronym for ‘Luxury Export to the United States’, with alternate theories even suggesting inspiration from Alexis Colby Carrington, the villainous matriarch played by the legendary Joan Collins in the most-watched show on US television in 1984, Dynasty. While an official backstory has never been confirmed, perhaps Toyota poetically cast itself as the villain, the disruptor, with a hint of mischievousness hidden in its luxury arm’s name.

For the LS – Luxury Sedan – Toyota pulled down multiple W126 S-Class models as well as BMW’s E23/E32 7 Series. Creating an all-new platform, the Japanese challenger’s dimensions closely matched the biggest Benz: an identical 4995mm length to the SWB W126 on a slightly shorter 2815mm wheelbase, and despite similar width, back seat space was comparable but not quite on par with Stuttgart’s sedan. While the exterior is arguably derivative, clearly influenced by Bruno Sacco’s W126, the cabin boasted newly-developed sound insulating carpet among high-end finishes and a world-first tilttelescopic airbag steering wheel. Even the plastic was ‘good plastic’.

Of course, that was teamed with typical Toyota functionality with clearly marked switchgear and crisp, neon tube needles – a first for a production car – shunning fashionable digital instruments for traditional analogue dials.

The ‘400’ name-checked the 4.0-litre 1UZ-FE V8 painstakingly developed for the LS, perennially featured in ‘best engines’ lists ever since. Its traditional 90-degree layout, all-aluminium construction and clever, compact cylinder-head design featured two cams per bank. While this quad-cam configuration wasn’t new, its lightweight aluminium cam followers were a world first and the belt-driven arrangement made it arguably the first truly reliable quad-cam engine.

Its 190kW was more competitive than earth-shattering, but continuous tweaks honed the 1UZ: a change in compression ratio in 1994, and then the addition of variable-valve timing for the second-gen LS (1997) cemented its status as a V8 for the ages. Unique 15-inch Goodyear Eagle F1 tyres and electronic traction control got that power to the ground.

A creamy 360Nm rode the flat torque curve from 2000 through to 5400rpm, while a slick, purpose-built A341E four-speed automatic transmission had its own ECU that would ‘talk’ to the engine for harmonious cooperation. The resulting velvety smoothness came from components such as its liquid-filled compound hydraulic engine mounts, which were part of an engineering strategy of eliminating NVH issues, not masking them.

That philosophy saw the engine tilted rearwards allowing the two-piece driveshaft to sit perfectly level, minimising power losses, reducing vibrations and virtually eliminating universal-joint wear. The steel used for the driveshafts was changed after vibrations in early testing, too.

Dynamics weren’t forgotten, though. A relatively lithe 1730kg split 54/46 front-to-rear was managed with double wishbone front and rear suspension and anti-roll bars, packaged with speedsensitive steering designed for high-speed stability. Autobahn testing in the Germans’ own backyard included honing of the optional air suspension, too, not offered in Australia.

Yet the LS400 wasn’t created to dazzle at the dealer and dull in the driveway. The FQ team (‘F1’ Quality Control) created an anti-ageing squad that tore down five- and six-year-old Toyotas to identify wear and tear, focusing on corrosion, paint fade, the retention of mouldings and long-term NVH performance.

The first LS400 came off the production line at the Tahara plant on Honshu, Japan, in May 1989, with each subject to more than 300 additional inspections over a regular Toyota. Despite this, and 4.4 million kilometres of testing, the first 8000 cars delivered in North America were recalled. Yet Lexus turned tragedy into triumph with its exemplary, world-leading handling of customers through the process. By the year 2000 and final iteration of the LS400, Lexus had topped the US JD Power quality survey every year it had been eligible. The sedan was independently verified as the most reliable vehicle in the USA. Australia was the third market in the world to receive the LS400, after Japan and the US, with Wheels 1991 COTY judge and later editor, Angus MacKenzie, making perhaps the most astute observation of the lasting impact the flagship vehicle would have. “Astonishingly smooth and quiet, it is now the benchmark against which all other luxury cars must now be judged,” he said. “More importantly it sets new standards for mass production manufacturing which Toyota says will eventually filter through to Corollas.”

Fittingly, in a vintage year, the only other vehicle in the 1991 COTY field to win final votes was Toyota’s own Tarago. This points to arguably the Circle F team’s most significant legacy. The LS400 and its accolades may be clear evidence of the sheer capability and determination within Toyota, but its own lessons and innovations enabled it to evolve into the biggest, most profitable automobile manufacturer in history. More than three decades on, Toyota is still to be toppled.

Capcom’s 1991 Street Fighter II is one of the best-selling games of all time and repeatedly cited as one of the most influential. That year, 25 million copies were sold in the US alone – all featuring a bonus stage where contenders destroy an LS400. The placement in the now legendary title may have seemed odd – given the vehicle is destroyed – but it cleverly enabled Gen X gamers to plant the Lexus brand into the psyche of their well-heeled baby-boomer parents.

In-house premium brands weren’t new in 1989, but Japanese carmakers faced tougher conditions in the US following their success in the ’70s – an ominous threat to America’s Big Three. They were burdened with import quotas from 1981 – 1.68 million across all Japanese makes. Cunningly, a luxury line was a way to maximise profitability despite the restrictions. Honda’s Acura came in 1986, Nissan’s Infiniti and Mazda’s Eunos in 1989. ‘Lexus’ even peaked as the 449th mostchosen US baby name in 1996.

“The benchmark against which all other luxury cars must now be judged,” we said at the time

THE BAD Slippery front seats; arguably derivative styling; many have been tuned, modified and/or drifted; grey imports may be a help or hindrance

Ahead of Frankfurt 1987, Toyota announced it was establishing a luxury arm to capitalise on the segment’s growth as baby boomers entered their ‘peak earning’ years