The BMW E36 Touring is growing old gracefully. BMW enthusiast Matt Swanborough has added this 328i to his collection and says those in the market for something similar should act fast. Words: Simon Jackson. Photography: Jason Dodd.

Matt Swanborough’s name might be familiar to regular readers for just last month we featured his striking E38 7 Series finished in striking Mora paint. The 39-year old marketing professional is back in print so soon for very good reason – the E36/3 328i Touring you see here. Though Matt now resides in Guildford he grew up inJohannesburg, relocating from South Africa to England in 2005 after spending many a holiday visiting family over here – his dad was Enfield born and bred. 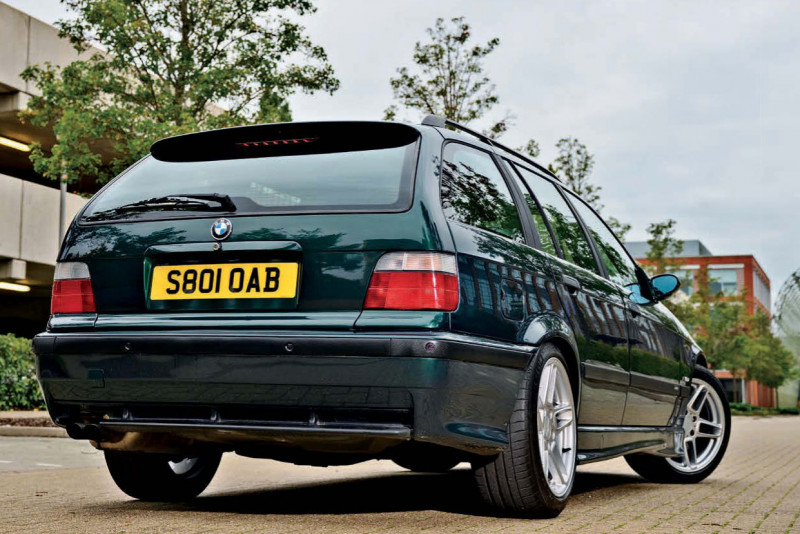 “Good examples command strong money compared to even a year ago”

“The last 17-years have been a bit of BMW hedonism for me in a way,” Matt smiles, “Sure, there have been dalliances with other brands, such as spell with a Porsche 924 and 944, and a couple of Alfas – a right of passage for any true petrol head. But the one thing has remained constant is that there has always been a BMW in my life.” 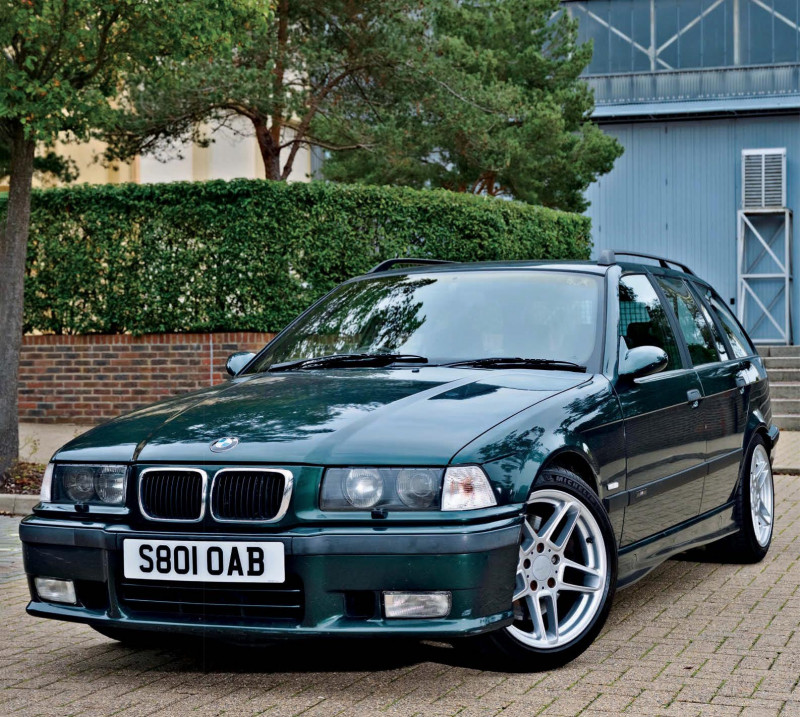 We’re sure you’ll agree that’s quite the list, and it omits the family Range Rover TD6 Vogue – powered by a BMW 3.0 diesel as Matt is keen to point out.

So, why was an E36 Touring added to Matt’s sizeable and impressive collection? “I have always loved the E36. I owned an M3 convertible some years ago which I couldn’t live with due to its body roll, I swore I would get an M3 coupé and had been keeping an eye out, then this 328i Touring E36/3 – manual – came up for sale fairly close by and, perhaps its an age thing, but the idea of a Touring really appealed to me. I love the practicality they offer, while still being on the little E36 base – and by today’s standards the E36 seems absolutely tiny. This particular car also benefitted a few AC Schnitzer bits having been fitted at the supplying dealer – BMW Heathrow. It was the cherry on top!”

The car in question is a 1998 on an S-registration, is the SE Sport model and has covered 128,000-miles. Its combination of Fern Green and black leather – which Matt added himself – is very on trend in 2022. “It was in poor condition when I got it but not poor enough that it couldn’t be enjoyed as is, it wasn’t hard to see the potential,” Matt said. “It had most of the common E36 sore points where it was starting to rust, including the tailgate and bonnet. The wheels were in terrible condition and the tyres very old. It had a nasty aftermarket back box with a giant hole in it and some small things around the interior were broken or missing; the driver’s side seat bolster was torn, an aftermarket radio and air intake were fitted which were not to my taste, and the bonnet and boot struts were tired. The paint also needed a polish too but all that said it drove like a dream and the engine felt strong.”

An extensive recommissioning was undertaken and Matt reports that the car now drives better than ever. There has been a little bit of trouble with the crankshaft sensor which is causing idling issues, and Matt has had to replace a lot of the cooling system from pipework to thermostat, but since doing that the car has been free from trouble in that regard. Matt uses Ultimate Velocity in Ash Vale for much of his BMW work and via that specialist he has connected with a community of like-minded BMW enthusiasts helping with every aspect of his ownership experience.

“The BMW scene continues to be as good as ever, it’s full of so many genuine enthusiasts and owners.” Matt said. “Over the years I have made many great friends and have come to think of the BMW community as quite close knit. We all seem to know a lot of the same people and share knowledge on cars and their owners or history. I personally really love how diverse the ownership profile is too, where nothing but the love of the marque or the model really matters.” 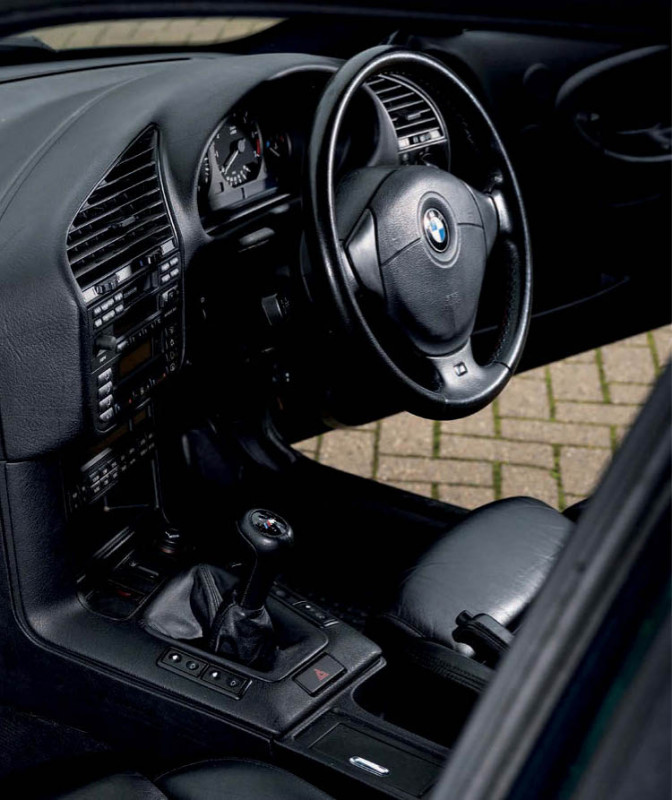 That said Matt doesn’t consider the E36 Touring to be a car that every BMW fanatic would appreciate.

“This Touring is a car I consider to be a bit of an oddball in my collection – it is not what I would call unanimously loved or appreciated by any and all,” Matt explained. “I think the Touring is a bit of an acquired taste, one for a certain kind of car lover. Some will just see it as a boxy station wagon, others won’t even see it at all as in the E36 world the M3 is king, closely followed by 6-cylinder coupés. However, for those that know a thing or two about E36s – the 328i SE Sport is a bit of a special car.

“BMW did not actually sell an E36 328i Sport (they made a 323i Sport) so the 328i is an SE model with all the Sport options ordered individually and assembled at the factory. So, when you start to geek-out on E36 production options that’s where you’ll find that not many of them were sold, and when you start looking at good colours, nice specifications, and gearbox options you find that this car really was quite a rare one. In my experience scarcity doesn’t equal great value, but for me that does just make it that much more special.”

BMW Tourings do seem to grow old gracefully and, like the E30 before it, the E36 is coming of age nicely. We wonder what Matt thinks of the driving experience it offers in comparison to the rest of his BMW collection and in the context of modern motoring offerings.

“I just love how small and nimble the car feels for a station wagon,” Matt smiled. “The E36 centre console and driver functions are all so well placed and in easy reach – and when specified with the full OBC, climate control and an OE radio head unit – it almost looks like a high-end 1990s hi-fi stack, especially at night with all the buttons illuminated – it simply looks brilliant!

“I also love the AC Schnitzer bits on the car, those were just a real bonus and add to the car for me. At first, I started thinking I should get rid of them all as I thought it was all fitted by a previous owner. Once I found out that all the AC Schnitzer parts were dealer fitted and, in fact, the AC Schnitzer mirrors were missing, I had to find some and put the car back to how it should be. My eyes still water at how much those mirrors cost to source and paint, but they were worth it!”

Clearly a fan of originality and the OEM look, Matt’s E36 Touring now looks as fresh as it did back in the late 1990s, we wonder, having breached the 30-year old barrier now does Matt consider the E36 as a current or future classic? “Absolutely!” he enthused. “The E36 is quickly becoming a future classic, it was an every-mans car in a way that the 5 Series and 7 Series cars could never be. I think in particular the less desired saloons and estates are future classics, they get overlooked by enthusiasts and collectors to the point where suddenly there are none left. I think finding great examples of the lesser coveted BMWs separates the real enthusiasts from those who simply see their car as some kind of investment or asset.

Matt plans to keep this car quite some time as he think that it sits nicely next to his aforementioned Mora metallic E38 7 Series, and once his 328i coupé is restored the trio will make a fantastic 1990s BMW “three car garage”. As for the E36 Touring what is Matt’s advice to any prospective owner?

“They seem to be going up in value quite rapidly to the point a lot of the E36 community are in a bit of disbelief,” Matt said. “Good examples command strong money compared to even a year ago, and the better the spec the quicker they seem to sell.”

Time is of the essence, then, if you want a tidy E36 Touring like this in your life without paying top dollar...

Matt fitted the full black leather interior and the OEM radio himself. He was pleasantly surprised to learn that the AC Schnitzer parts were factory-fitted...