The heart-warming story of a freshly restored 1963 Abarth 1000 Bialbero GT ‘Duck-Tail’, which still holds the world land speed record in the 1.0-litre class.

In 1973 I was living in Scotland, working in the chilled food sector. Whilst visiting a distribution depot in Aberdeen, one of the staff mentioned that her son had seen me racing at Ingliston and thought that I might be interested in an Abarth, which apparently belonged to a resident of Crieff near Perth.

In those days, I was basically living a bachelor life and all my cash was spent on motor racing. In consequence I had no stash of cash for an Abarth but I made contact with the owner anyway. He confirmed that the Abarth was available to purchase, so I set off with my trailer and a small amount of cash. On arriving at the house, I realised that I was really out of my depth. This was the family home of Sir William Keith- Murray of Ochtertyre, 11th Baronet. He was a member of one of the great Scottish families that could trace its roots back to the early 15th century. The Maserati parked outside the front door further suggested that I was not quite in the same league.

Sir William met me at the front door and was most hospitable and charming. We strolled up to the stable block and there, outside in the long grass, was a Fiat Abarth 1000 Bialbero GT. Sir William had purchased it at the 1963 Motor Show directly off Anthony Crook’s Abarth stand. It cost him nearly £3000 when a Jaguar E-Type was around £2000. He ran the car on the road for some years but experienced trouble with the brakes and the car was, literally, put out to grass. 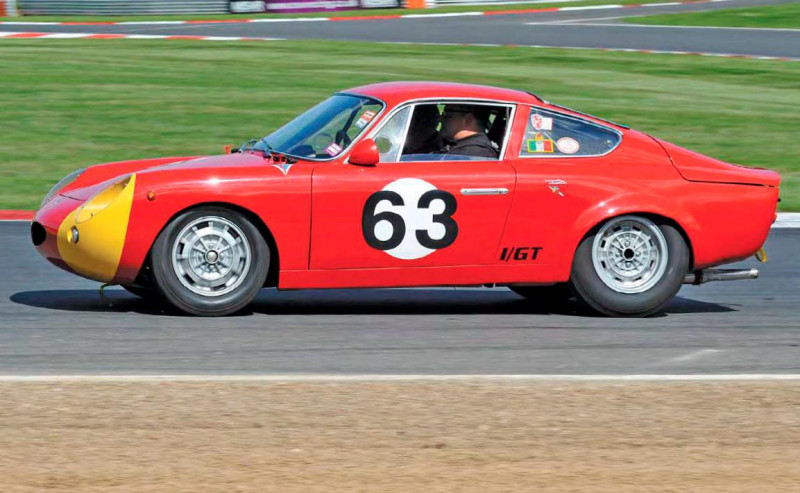 It was covered in moss and a pole had fallen on its distinctive ‘duck-tail’ rear, leaving a significant dent. I remember lifting up the engine cover to reveal an Abarth Bialbero engine complete with crossover inlet manifold and twin Weber 40DCOEs – magnificent! On opening the passenger door, I found the car to be full of water, right up to the sill. My initial shock gave way to the realisation that there must be unholed floors and indeed this turned out to be the case, however the bodywork and floors were in relatively good condition. The car was only 10 years old at that point but it certainly looked challenging.

Not for the last time in my life, I acquired an Abarth for way below market value, because the owner wanted to see their car restored and driven again. So a deal was agreed and we toasted it with a very large gin and a very small bitter lemon! 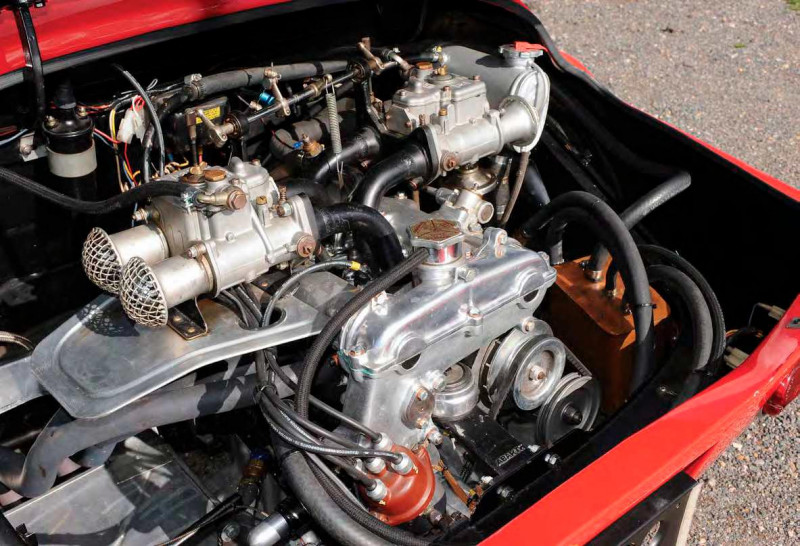 Whilst still in Scotland, I dismantled the car and carefully sorted all the parts into boxes. Subsequent moves to the Midlands and then back to the south meant that the Bialbero remained in storage for over 10 years. I never did restore the Bialbero and in fact sold it in 1985, along with other Abarths, to generate the cash needed to launch Middle Barton Garage. The Bialbero passed to my great friend ‘Judge’ Parker in the USA, who undertook a wonderful restoration. I was reunited with the Bialbero at Sebring in March 1986, once again resplendent in red paint and with all the original parts in place.

The car was later sold to Ralph Thomas, who was then competing in a Fiat Abarth 1000 Berlina Corse. In his hands, the car competed at the Bahamas Speed Week and in 1992, the Bialbero set a World Land Speed record for 1000cc GT cars at 121.779mph. I believe this record still stands today. Ralph Thomas sold the car and went on to become seriously involved in Sports Prototype racing with Nissans.

Over the next few years, the Bialbero changed hands in America until it was acquired by Martin McGlone who was well known driving his Aston Martin DB3/S sports racing car. Today the car is owned by Kay McGlone. Recently, a full engine rebuild and recommission has been undertaken by Barkaways and the car is once again ready to go. In real terms, the Bialbero has had little use but has certainly accumulated an interesting history. It’s wonderful to see the car back in the UK.

The Fiat Abarth 1000 Bialbero GT was manufactured in 1963 to continue the Abarth & Co factory’s domination in Division 2 of the World Sports Car Championship for 1000cc cars. The bodywork was by the Italian coachbuilder Sibona and Bassano, featuring a duck-tail engine lid which, together with a highly aerodynamic design, meant the car could attain a top speed of over 120mph. The 1000 Bialbero was very successful in racing, both in Italy and internationally.

Underneath is a remarkably unmodified Fiat 600D platform, retaining the original transverse front leaf spring and rear trailing arms. Some strengthening, Koni dampers, Girling disc brakes and Campagnolo wheels were the major additions to the Fiat chassis. The gearbox was an Abarth five-speed unit based on the Fiat 600D transaxle, which offered a wide variety of gear ratios and final drives.

The real magic, as with so many Abarth cars, lay in the engine compartment. The 1.0-litre twin-cam engine is 100% Abarth. The cast-iron cylinder block looks like a Fiat 600 unit but is actually a specially cast thickwalled block. Designated AH, it allows a standard bore of 65mm with an overbore of 66mm, versus a standard Fiat 600 bore of 60mm. By using an Abarth 74mm steel crank and rods, a capacity of 982cc is obtained. The aluminium Abarth cylinder head sports two chain-driven cams. The carburation is by two side-draught 40mm Webers mounted on a cross-over inlet manifold. The 1963 engine was rated at 102hp at 7600rpm, giving the 560kg GT car amazing performance.

The 1963 version was the last all-aluminium-bodied 1000cc Bialbero, since the 1964 model would sport a tipping ‘long nose’ in glassfibre. 1964 also saw the end of the 1000cc class in World Championship racing and Abarth’s efforts turned to 1300cc and even larger capacity engines. This diminutive car marked the end of a succession of very successful line of 1.0-litre twin-cam GTs. It represents one of the finest examples of what can be achieved when starting with a mundane chassis.

After the sad passing of Martin McGlone, this very special Abarth had been laid up and unused. The car came to Barkaways to recommission it and get it running again. On inspection there was a lot of coolant residue around the engine bay and looking closer water was found inside some of the cylinders. The engine was removed and stripped down, which revealed slight corrosion on the cylinder walls, looking like head gasket issues.

Obtaining parts and information for old race car engines like this is never easy, so new pistons were made and the cylinders rebored. With new conrod and crankshaft shells and a cylinder head overhaul, the engine was reassembled. It was nice to see that the engine had some upgraded components, including a very nice cross-drilled steel crankshaft and a large-capacity Abarth alloy sump.

When it came to cam timing, there was a variety of old data in the car’s history file. The cams were set up to the first set of figures but the engine was hard to start and didn’t like idling. The decision was made to adjust the cams back a bit to enable the car to be started and moved around more easily, as there was no plan to race the car at this time. 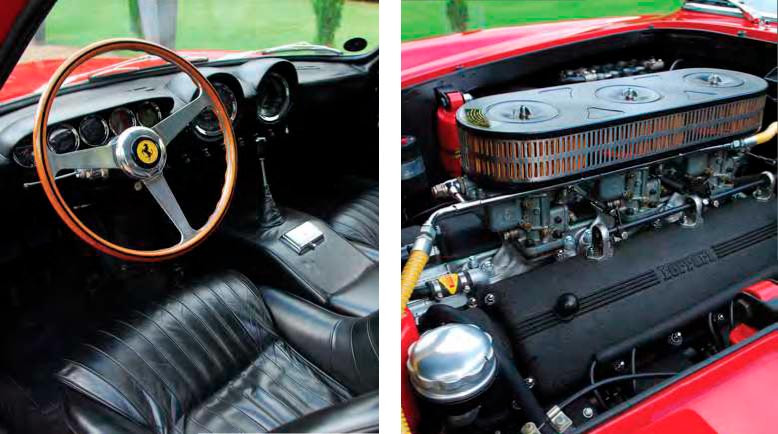 The car had two gearboxes – a straight-cut crash unit and a normal synchro one. Again, the synchro ’box was put back into the car for ease of use. It’s great that the car now runs and drives, making a great noise in the process!

The Abarth was purchased in March 2013 in California. The attraction was the car’s land speed record for its class at Bonneville Speed Week in 1992. My husband Martin had himself entered Bonneville for a number of years in a Mustang 350 Fastback, achieving 221.83mph.

The Abarth was raced at Sonoma in 2015 by Martin McGlone and Christopher Clegg. At Coronado in 2015 it was raced by David Walmsley. It was shipped to the UK in spring 2016 and raced at the Silverstone Classic that year by Martin McGlone and Christopher Clegg. Returning to the Silverstone Classic in 2017, the year that Martin passed away, it was raced by Simon Jefferies and Richard Tyzack. Finally, the car appeared at the 2019 Brands Hatch Festival Italia, prior to a rebuild at Barkaways.

Here’s an extract from Martin McGlone’s diary at Bonneville in 2014. “In 1992, my 1963 Abarth Bialbero ‘Highlander’ – named after its first owner, Scotsman Sir William Keith-Murray – set the Land Speed Record of 121.779mph for 1000cc GT cars. It still has its record intact after 22, soon to be 23, years. Its nearest rival is Chris Conrad from Wyoming who has been trying for some years now to better this speed in his MG Midget. So too has a modern Honda and, I’m told, a Suzuki. Chris tells me he has a picture of his nemesis, my Abarth, pinned to his dartboard, on which he regularly vents his frustration. Following Chris’s search for ‘low hanging fruit’ in the record books, he now fancies getting a Morris Marina pick-up and prepping that. Good luck Chris!”