The most frustrating thing about owning a Fiat 124 Spider is that I didn’t do it earlier. I have a soft spot for Fiats, competing in a 1935 Balilla 508s in Vintage Sports Car Club (VSCC) events, and running as my daily driver a 1980 Campagnola that I imported from Italy. I have for many years been a customer of DTR European Sports Cars (dtrsports.com), which made its name importing 124s from the US to the UK, and I had seen countless examples there. A friend asked if I knew anything about a 124 that DTR had for sale at a very tempting price, and I promised to check it out. 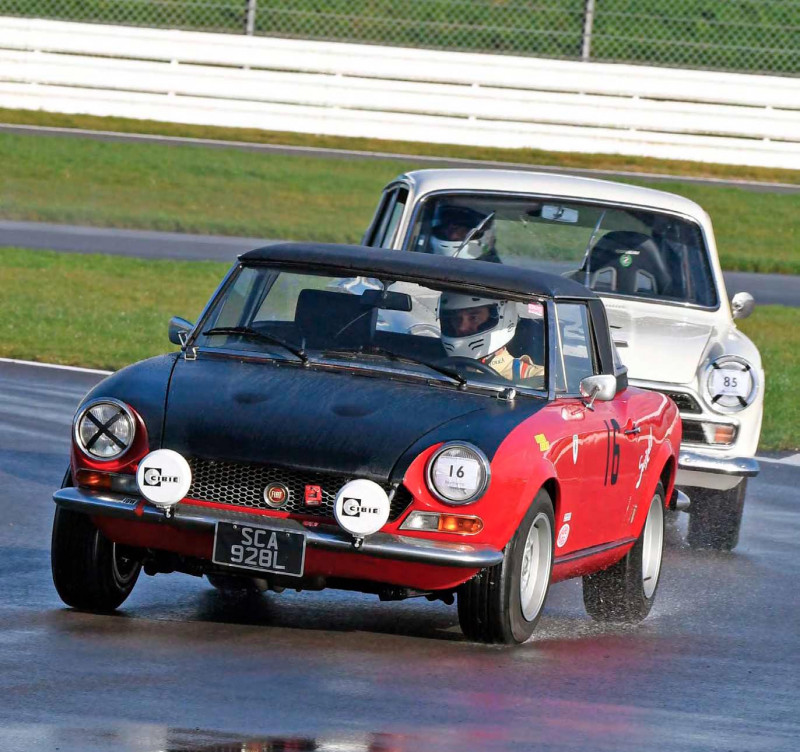 I duly asked Paul de Turris of DTR to show me the car, a 1972 California model imported to the UK in 2016. The paint was tired and the interior trim incorrect, but it was a very solid car. Better still, it had had thousands of pounds spent on it, including a change to European-specification suspension, new brakes and a new hood. Paul sent me on a test drive, and I was amazed at how modern the car felt for something almost 50 years old. The engine compression was down a bit, so the car was being sold as a ‘project’. In the meantime, my friend decided he didn’t want a 124 after all. Inevitably, I bought it.

I then started doing what any sensible person does before buying a car – finding out more about it. The chassis and engine number showed that it started life as a BS1 model with a 1608cc US-specification (80hp) engine. Luckily, it had been replaced by a European-specification 1608cc engine. For some reason, the head had been replaced, and the serial number on that suggests it came from a South African 1438cc engine. The tired red paint had been applied over original yellow.

I also researched the wider competition history of 124 Spiders and was obviously familiar with the iconic Abarth Group 4 cars. What really caught my eye was that, before the launch of those 1800cc, de-bumpered monsters, the 124 Sport Spider had enjoyed considerable competition success, culminating in winning the 1972 European Rally Championship with Raffaele Pinto at the wheel and Gino Macaluso co-driving. 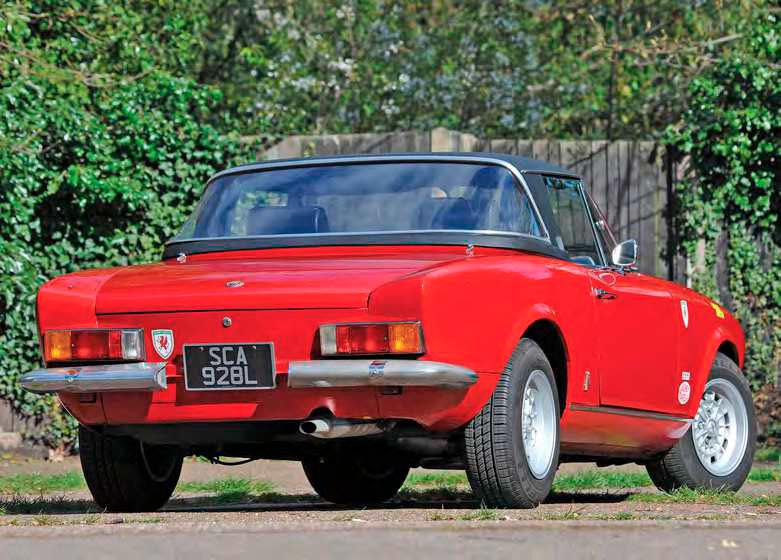 A plan was hatched – my 124 would be modelled on the 1972 rally cars. I wanted a car that could be used at track days, but also on the road. DTR’s brief was to keep costs under control and Paul and his team quickly got to work. First, the inlet manifold was replaced by a freer-breathing item fitted with twin 40 Webers and individual air filters. The ugly US modifications were reversed: the side reflectors were cut out and bumper mountings modified so the bumpers could sit closer to the body. A visit to the paint booth included painting the bonnet and wing tops matt black to match the rally cars. Other cosmetic changes included fitting European light clusters and replacing the grille with the correct BS1 version. The interior was stripped out and a Prototipo steering wheel from the Momo heritage collection fitted, along with a pair of Fusina-style buckets. Campagnolo-style alloys came from Middle Barton Garage, a pair of Cibie Oscars were attached to the front, and some period decals applied.

The missing piece of the jigsaw was a hardtop but genuine ones are in short supply at prices that make you wince. I thought the hardtop might be a step too far, but DTR came to the rescue. Paul knew of one that had been blown off a 124 as it made its way across the Queen Elizabeth Bridge. The pieces had been recovered and were for sale. Paul reckoned the DTR team could reconstruct the roof with the all-in cost being considerably less than prices being asked in Italy. A week or so later, the car had a hardtop.

The first drive out of the DTR workshop revealed a car transformed. Swapping the manifold and carburettors liberated more power, while the induction noise that resulted from ditching the standard airbox just made me laugh out loud. The 124 will never be a fast car by modern standards, but it does a great job of fooling you into thinking you are going fast.

The first meaningful road test came a few weeks later, on a drive out with the Wacky Racers Coffee Club (a group of enthusiasts corralled by Charles Evans). A couple of hours of Sunday morning touring around Surrey highlighted the balanced, neutral handling of the 124, and showed that despite its lack of ultimate grip it can keep much more powerful machines honest. The inevitable teething problem ensued as I headed back into London, with the engine temperature rocketing as I sat in traffic. A broken thermostat proved to be the issue, which I managed to change myself, outside my house, proving how easy these cars are to work on.

Next up was a 96 Club track day at Brands Hatch. I shared driving duties with my 18- year-old son, which meant the 124 would get a proper work-out, given that he has attributes I lack (the fearlessness of youth and a modicum of talent, for example). The track day confirmed that the 124 handles beautifully, despite riding relatively softly: it grips tenaciously on its modest tyres, but lets you know when the limit is about to be reached without suddenly snapping away.

Of course, it wouldn’t be a 1970s Fiat without a few foibles. At Brands Hatch, it blew a fuse for the dashboard instruments, meaning that we had no rev counter, oil pressure or temperature gauge. Surprisingly, the brake lights seemed to be on the same circuit; in fact, it seemed as if just about every electrical component other than the coil and cigarette lighter were on that circuit. I guess in 1970s Italy, if the car drove and you could light your cigarette, no problem. Once changed, the fuse blew again, and again. I then remembered that when I first drove the car, the horn had not been working and I found it was simply a spade connector that had come loose.

Disconnecting the horn did the trick. Next came The Pom – or to give it its full name, The Laurence Pomeroy Memorial Trophy. This is the only event on the VSCC calendar open to modern machinery, as well as vintage and post-vintage thoroughbreds. The aim of The Pom is to find the ultimate touring car. It has evolved somewhat since the initial event in 1952, but still uses the famously unfathomable formula dreamt up in 1949 by Harry Bowler to handicap the entrants.

The current incarnation of The Pom involves a series of tests designed to measure speed, agility and braking, coupled with a 40-minute session on the full international GP circuit at Silverstone for which each car is given a target number of laps to complete. Points are awarded for each test. Scrutineering at The Pom is a little bit different, as the scrutineers want to see whether the spare wheel is in place, any hood is erected, and whether the car will accommodate two suitcases. Points are deducted for failing any of these – meaning it is possible to start the event with a hefty negative score.

The large field of entrants is divided into groups. While there is an attempt to group cars of similar abilities, you see a remarkable diversity of cars on track together at any one time. The 124 was in Group 1 for the morning tests, the first of which was a 0.25km slalom along the straight in front of the old pits, affectionately known as the wiggle-woggle. It was all over in the blink of an eye (although the stopwatch bizarrely suggested otherwise) and I was on my way to the Hangar Straight for test two wishing I had been a bit more wiggly-woggly.

Test 2 was in fact two tests and very straightforward: a standing quarter-mile followed immediately by a timed flying quarter-kilometre. This was a bit of a curate’s egg for the little 124. The acceleration test went well and the needle zipped around to 80mph, but the engine ran out of puff at that point and I was rocking in my seat as I urged the car to the finishing cone. In theory, the 124 should pull into three figures, but this was evidence of Paul’s warning that my engine was down on compression.

Then came the fiendish braking test on the Wellington Straight. From a standing start you accelerate over 100m to the point where timing begins, followed by a 100m run to the braking point. Timing stops when the car comes to a halt with the front wheels between two cones 3m apart. Overshoot, and no points are awarded. It’s like a game of chicken – how long can you keep accelerating and still stop in the box? My answer was ‘cluck cluck’ but the brakes on the 124 turned out to be better than I thought.

The 124 was placed towards the back of the grid for the afternoon’s high-speed assault on the GP circuit. As the cars lined up, I felt like I had been transported back to a 1970s touring car race. Directly in from of me was an Alfa Giulia Sprint GT, Lotus Cortina and Escort Mk1. This was my first competitive circuit event (my usual fare being hillclimbs and sprints), and as I looked at the professionally-prepared, rollcage-equipped racers up and down the grid, I felt reassured that I had at least checked there was air in the 124’s tyres and applied my novice sticker.

Before I had time to convince myself that this was all a very bad idea, we were heading out on to the track. We were treated to two familiarisation laps behind the safety car, leading to a rolling start. The circuit was very wet and I was glad of the opportunity to explore how much grip there was before the racing started. The early laps were somewhat hairy, with lots of traffic, not so much grip and poor visibility. But as the cars spread out and a dry line developed, I started to enjoy it and push the 124 harder. It showed its displeasure by doing its fuse-blowing trick, leaving me with no instruments other than a speedo. At least I knew that the 124 was now managing to reach 90mph on the two main straights.

The lack of a rev counter meant I was probably changing up a little earlier than I might have, but I didn’t want to blow up the engine. Despite this, I spent some very enjoyable laps tussling with a Rover 200 BRM before the fastest cars started to appear in our mirrors and the blue flags forced us off the racing line and on to the wet part of the circuit. It was hard not to feel a bit of schadenfreude when, having moved over for a rapidly advancing Porsche Boxster, I then saw it spinning its wheels as it desperately fought to exit the sand a few corners later. With the faster cars haring off into the distance, I started to make back the ground lost to the Rover but sadly the chequered flag stopped play.

Overall honours went to Jason Kennedy in his 1993 Nissan Skyline GT-R, a well-deserved victory. I finished with a total score of 318.5 out of 450. Sadly, that was ten points short of a pot, but close enough to convince me that one is within reach.

Back in the paddock, as I put the spare wheel back in the boot, packed up my tool bag and purloined a fuse to bring my instruments back to life, I decided that the 124 really had been an excellent acquisition. It just needs a bit of fettling to bring it back to its best. Luckily, I know just the people for the job.

No, it’s not an Abarth – it’s a replica of its forebear, the 1972 title-winning Fiat 124 Sport Spider rally car. Car performed superbly at Silverstone. Hardtop tricky to source but a damaged one was rebuilt by DTR.

The 124 handles beautifully, despite riding relatively softly: it grips tenaciously on its modest tyres