The Penske PC-23 is famous for its 12 of 16 victories in the 1994 IndyCar season and equally notorious for exploiting an ambiguity that surrounded pushrod engines, which saw it utterly dominate that year’s Indy 500.

As the latter race was sanctioned by USAC – a governing body separate from the sport’s season-long regulator (CART) – different rules applied. Under the Indy-only rules and to lure smaller manufacturers, special dispensation was made for two-valve, stock block non-OHC pushrod powerplants (such as the Buick V6) running production-based parts. For equivalency, this allowed for an additional 650 cm3 and 0,3 bar extra boost over the regular 2,65-litre V8s. 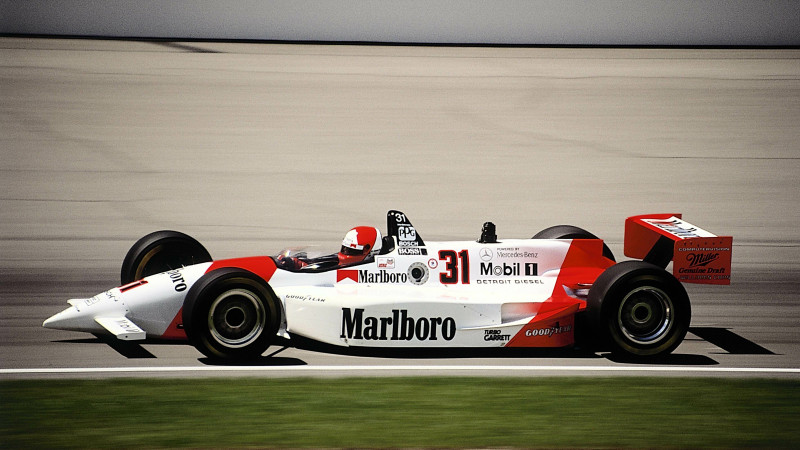 Key to Penske’s success was the exploitation of the production-based requirement that was quietly dropped in 1991. Although the conventional Ilmor D did duty at all the other 1994 races, Team Penske curiously arrived at Indianapolis with a purposebuilt pushrod engine instead. Also built by Ilmor, at 1 024 horsepower (764 kW) the one-off Indy special was capable of an alleged 150 kW more than its nearest rival. Fearing a pre-race ban, it was developed in utmost secrecy in the months preceding the Indy 500. Stuttgart got wind only as the project neared its completion and upon becoming aware of its potential, paid to have the engine branded as the Mercedes 500I.

Emerson Fittipaldi lapped the entire field with 16 laps to go before crashing the next and handing victory to his teammate, Al Unser Jr.

Following the outrage, the maximum boost for pushrod engines was greatly reduced for the 1995 race and the concept was completely outlawed in 1996.

Today, Ilmor exists as Mercedes AMG High Performance Powertrains. Even if its 2020 F1 engine triumphed at 18 of 20 races, that’s still short of its admittedly distant – and exceedingly controversial – 500I cousin’s perfect score: the ultimate won and done.