In spring 1975 a customer is inspecting the new Porsche 930 that, thanks to its turbocharger, was probably the most sensational car you could buy. And it attracted the rich and famous like no car since Jaguar’s E-Type.

Here in centre shot, the renowned conductor of the Vienna Philharmonic Herbert von Karajan is at Porsche, surveying the new 911 with a critical eye, although another from the series of photographs taken that day shows him grinning like a schoolboy as he climbs into the 930 on the Weissach track. And who could blame him for such a reaction? 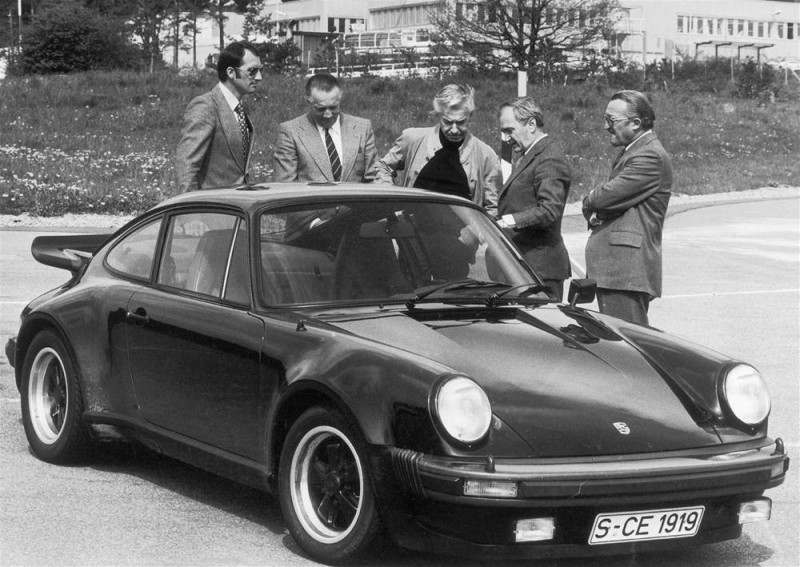 Herbert, a friend of the family and part of the clique around Porsche that Tony Lapine used to refer to as the “Austrian Mafia”, was not on his first Porsche. Over the years he owned various exotic sports cars, but invariably returned to Zuffenhausen. In the 1950s his 550 Spyder was replaced by a 718 RSK and 10 years later he acquired an RS 2.7. So taken with this 911 was Herbert that he prevailed upon Ernst Fuhrmann, another Viennese, to build him a lightweight 930 – a discussion which probably began the day our picture was taken.

Ernst then persuaded a reluctant Helmuth Bott, a practical Swabian, to schedule this very special one-off on a production line that already couldn’t cope with demand for the stock 930. Crucially, the eminent conductor, who was then at the height of his popularity, could pay – and Porsche and workshop manager Rolf Sprenger in particular woke up to the idea that there was an entire business to be had from customisations. And thus the Sonderwünsch department was born.

In the event, this exceptional Turbo, which was based on an RSR chassis with an RS body and a larger turbo, reputedly had over 350bhp. In the 1980s, Rolf ’s department would go one better with the road-going 935 that was built for Mansour Ojjeh of TAG, but by then Herbert had moved on to the 959, of which he soon bought a second after crashing the first.

A measure of the esteem in which Porsche held this customer is the veritable delegation that accompanied him that day. From left to right is company spokesman Manfred Jantke, always present to distil the proceedings into a press release; engineering director Helmuth; Herbert himself; managing director Ernst who’s doing the talking; and beside him is Hans Klauser.

As customer service manager, who for almost any other client would have been handling such a visit largely by himself, Hans might have felt slightly superfluous. Yet he had by far the longest career of any of the Porsche quartet, joining the Konstructionsbüro in 1936 and becoming the workshop manager at Zuffenhausen as soon as the company moved back in 1950, where he recruited its first mechanic, Herbert Linge. Hans’ signature appears on all engine sign-off documents until the 911 era.