Terry Mitchell couldn’t get any work done due to the pandemic, so he decided to do everything himself instead. That worked!

‘THE CAGE FORMS PART OF THE GRILLE’

So this project started originally in March 2010 as a 1973 Chevrolet C10. It consisted of a major stock pile of parts with the intention to build a pro-touring style Chevy pickup. After months of searching, I found what I thought was a suitable C10 in Billericay Essex. I went down with a pocket full of cash (£9000), and made a deal on what was a nice freshly painted project that apparently only required a bit of work. The truck looked the part when viewing, however once back at home it came fairly evident that something wasn’t quite right with it. I started dismantling it to start the build, only to find it was completely clagged in filler under the fresh paint and was completely rotten. I was a bit dismayed at this point, but that was the least of my worries… Once the cab was taken off, none of the critical numbers matched the paperwork — the seller had completely screwed me over. I was left with a truck I couldn’t use, and a load of surplus expensive parts with no vehicle to use them on.

But I did have a garage full of performance parts, everything from MSA bucket seats to a gnarly Mercedes-Benz OM606 3.0-litre turbo-diesel engine. It was a frantic search for the C10’s replacement – and this is how the 1941 Ford drift rod started. 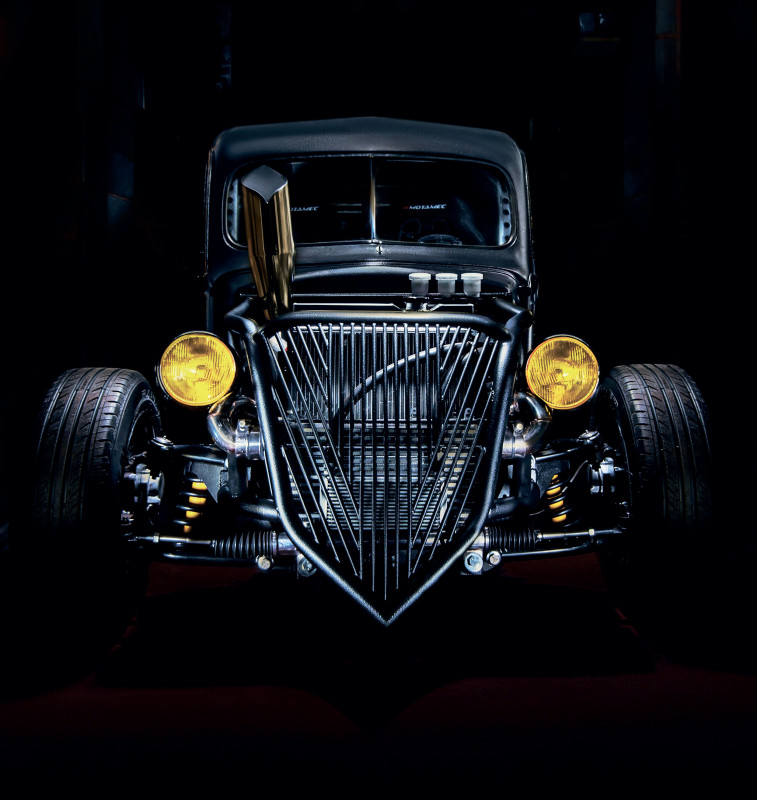 The 1941 Ford pickup was rotten, however to my delight none of it was hidden under fresh paint — and more importantly the paperwork matched!

Most builders would pick a type of car or truck they like, and work their magic around that – but in this case it was more of building the hotrod around the beast of an engine. The OM606 is well known in Europe as a performance engine in drifting circles thanks to Blacksmoke Racing and Dieselmeken. They can push serious power through a fairly standard engine with just a few modifications such as a reworked pump and a huge turbo. There are down sides to them, such as the nightmare design of the glow plugs, which can get stuck in the head, and also the difficulties with finding a gearbox to suit (as there was never a manual option from factory). 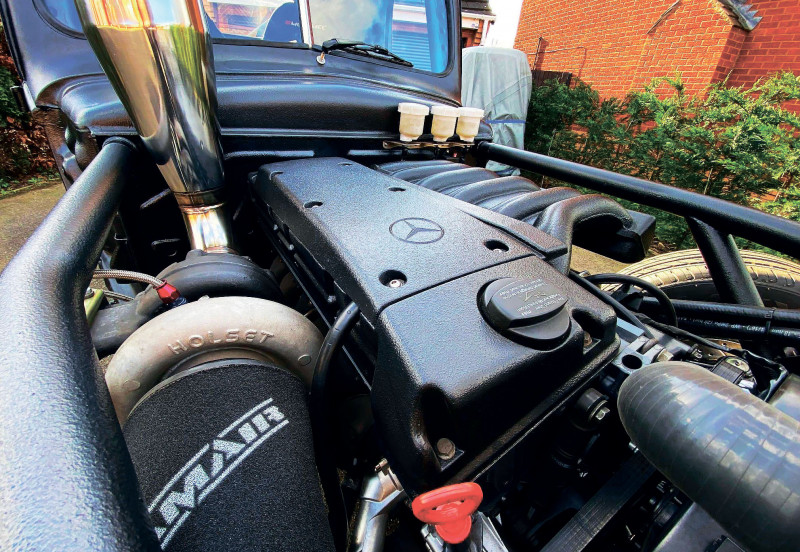 I’ve done two other previous builds using an OM606, so already had an understanding of the issues and also what to use for the conversion in terms of parts. I refreshed the engine, including the nightmare job of replacing all of the glowplugs (that job alone took a full day, and a slide hammer was involved!). I removed the autobox as I didn’t want to run an aftermarket controller, and I much prefer manual.

The cheapest, tried and tested way of doing this is to use a Mercedes sprinter single mass flywheel conversion clutch kit, and machine the crankshaft end back a few millimeters. Once that’s done, the clutch kit will all mount up, and you can bolt on a strong Mercedes manual gearbox. This particular truck is running a six speed Mercedes Vito gearbox, purely because it’s able to take a lot of torque compared to some of the other Merc gearbox options. The benefit also, is the gear selectors are cable, so that means one less job to worry about. 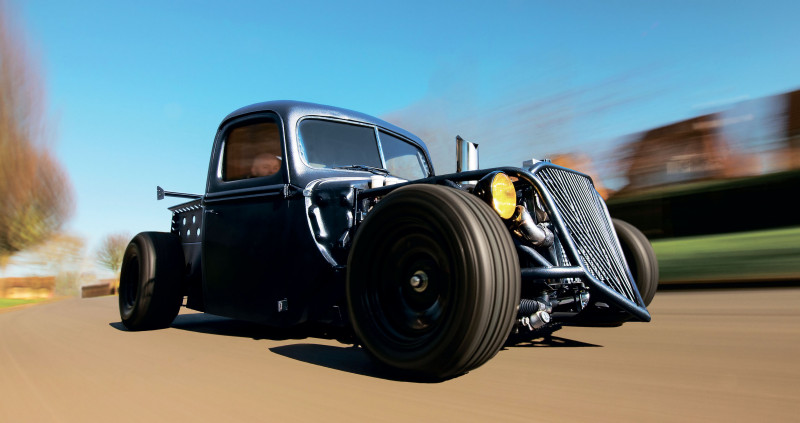 I set the engine to TDC and removed the electronic fuel pump, in favor of a rebuilt 7.5mm Dieselmeken pump from a Mercedes 603 engine. I had close contact with Dieselmeken – they calibrated the pump to suit the Holset HX40W turbo. There were a few other subtle mods done, such as a power steering delete (as I prefer the feedback manual steering gives), and also a coolant bypass modification to the engine block, plus converting the low pressure fueling to low pressure high volume using an 044 pump.

With the engine sorted, it was time to source an 8.8 axle from a Ford Explorer. These axles are offset, however they’re much stronger than the Mustang 8.8 variety as they have bigger 31 spline shafts and also run disc brakes and a Trac-lok limited slip diff. The axle needed all the old brackets removing and some strengthening mods doing. The halfshaft housings are press fi t from the factory, so these need welding – and a Rear Performance Ford 8.8 billet girdle was installed along with new custom built brackets for my four link and Panhard bars. The axle was then topped off with a full rebuild including brand new calipers and discs.

I now only needed to decide what front end to use, as the 40s truck stuff wasn’t really suitable for 100bhp, let alone nearly five times that. This is where I settled on the Mustang 2 Heidts kit, with the added benefit of keeping the front and rear axle PCDs the same to allow for a matching set of wheels.

While waiting for the front suspension to ship over from the USA, it was time to start planning the build. I’d decided that as a crisp packet had more strength than the pickup bodywork, it made sense to fabricate a complete CDS rollcage from scratch. This was designed to be integrated into the chassis, yet still allow the cab and engine to be removed if needed. This took a bit of thought, and some extremely expensive MSA roll cage joiners to pull the idea off. 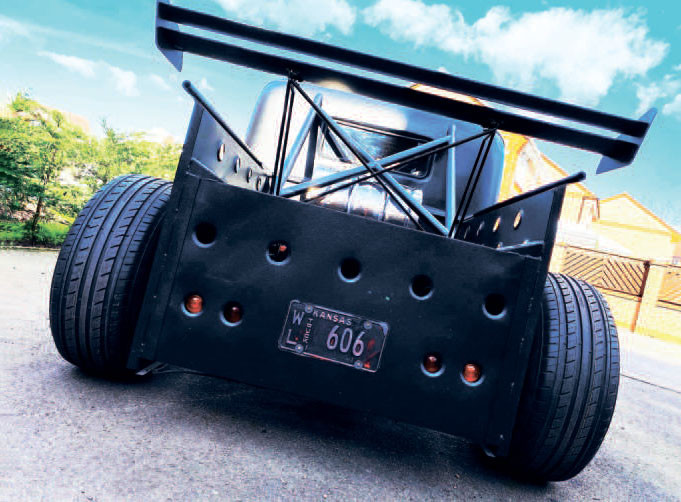 I started by making the main rails from thick walled heavy duty box section, incorporating a 3° rake into the designs to give a nice stance to the finished build. However, work came to a standstill fairly quick as I couldn’t find anyone to do the cage work due to the pandemic. At this point I thought I would just bite the bullet and buy a proper cage bender and around two grand’s worth of CDS from Performance metals. I then got thinking about other work I would normally outsource but couldn’t due to the pandemic, so I ended up adding an old Colchester lathe to the shopping list.

With the correct tooling, the bulk of the chassis was made (90% of it TiG welded), and the cage was taking shape. As the cage is tied into the rear rails (via a removable X brace) the cab had to be solidly mounted to the frame. The cage passes through the rear of the cab into the top of the rollcage, and then down to the floor and back into the frame again. The cab in its original form is extremely tight, so it proved awkward to get a cage in that wasn’t in the way.

The way around this was to remove the original dash completely, chopping out everything between the A pillars and screen. This allowed me to run the cage right to the very front of the cab, and then to TiG weld in a piece of steel between the two dash bars for the gauges, and then make a dash top which is TiG’d to the cage. This gained me probably four or more inches of space. The rear of the cage is formed around the FIA seats, including both harness and door bars. There have also been a lot of dimple died strengthening gusset’s put in, these have made the cab less like a bowl of custard, and now entirely rigid.

With the internal cage sorted I then needed to work out what to do at the front. I couldn’t make my mind up about a bonnet, and I also wanted the cage triangulated from the A pillar and to pass through the bulkhead. Clearance on both the Willwood pedal box, and the turbo on the opposite side determined where I could come through with the cage. With the bulkhead placement being high, it made sense to keep the height all the way to the front, as this would allow me to fabricate and fi t a bonnet at a later date if I wanted. The CDS comes all the way to the front and down to form a one off grille. As with the removable cage X, the front can also be unbolted (via five roll cage joiners). This means if any major work needs doing on the engine or the cab needs removing, it can all be stripped in less than an hour.

With the majority of the truck now done, it was just a case of fabricating all the mountings for things like the oil cooler, rad, intercooler, stainless exhaust and boost pipes Once these bits were complete it was just the bodywork and the rear bed to make a start on. I am a stickler for rust or filler – I can’t deal with either. So I cut out any suspect metal work and made new panels. The full floor was scratch built, along with new door bottoms, lower A and B pillars, rear cab corners and even a custom swaged outer scuttle. I used no filler and left all the character dents – I feel removing stuff like that takes away part of the truck’s history. The rear bed was made again from scratch, using nothing more than sheet steel and dimple dies and a cold garage full of swear words. Once all the heavy fabrication was sorted, the whole truck was pulled apart for paint. The cab and frame were all sanded back, cleaned and then epoxy primed – ready for a liberal coating of Raptor paint. I must have gone through around 15 liters of Raptor as it doesn’t go as far as you think it will, especially when chasing that aggressive texture.

Once it was all painted it was time to assemble and start making all the AN hoses, fuel lines, brake lines and wiring – again all of this was done at home due to issues outsourcing work. There are a few retro touches to it, like the decommissioned beer keg tank and the tiny 8in deep dish steering wheel. The whole finish was intended to do something unusual with a hot rod, and give it a more modern twist.

The truck has been built now for a couple of months, but I’m still waiting for the right weather to give it absolute death around a track. I’ve been invited to a few shows to display it, providing I don’t wrap it round a barrier before hand as it is a bit of a handful from the quick blips around the block I have had.

It’s quite a dark theme. We think he might have

We think he might have removed the EGR system.

Merc engine in place. Strap in, folks. HAs it been parked under an apple tree by any chance?

Article type:
Review
1941 fordfordmercedes-benz om606mercedes-benzmercedesmercedes benz
—
802
Write a comment
No comments yet. Be the first to add a comment!