This Mk1 Cortina may appear to be period correct when you first see it, but look a little closer — the discreet modern touches take it to another level.

Let’s start at the beginning, where sun-glass wearing, Sydney Australia native Tristram Deas tells us the back story of the Mk1 as he casually leans against the mint front wing in the evening sunshine. “I got it off a neighbour here in Sydney back in 1992, and he had brought it down from a farm in rural New South Wales where it had been sitting out in the elements for several years. It was in very average condition, with no engine or gearbox, very little interior, and what seemed to be some creature nesting in the boot!” 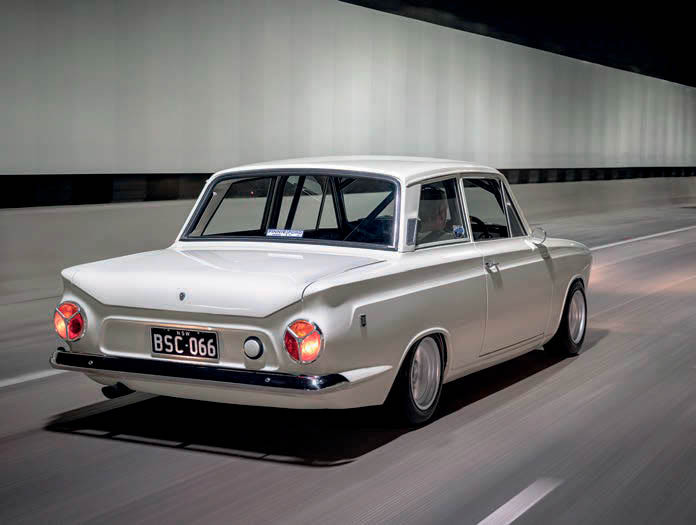 “AFTER SUCH A LONG BUILD, I NOW JUST WANT TO ENJOY IT AS MUCH AS I CAN” 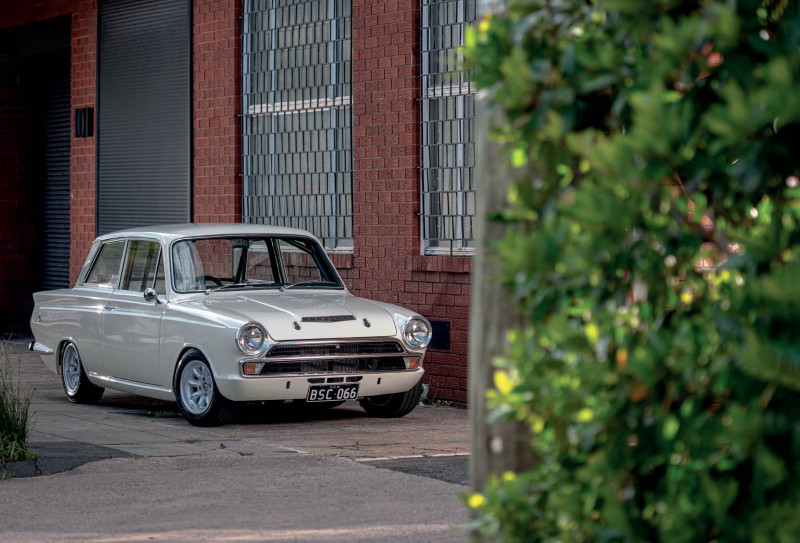 The original plan was to build a full-tilt replica Lotus to complete in closed road rallies. Tristram and his father, Paul who was a panel beater and painter dove head long into the build, and soon the shell was stripped, prepped and painted in the correct Lotus colour scheme. Then a spanner in the works saw the fresh shell sit laid up from mid- 2000s to 2022. The father and son team had hit a cross roads, trying to work out if they continue with the Lotus build or head in another direction. Then one day the penny dropped, and the new direction was now all about the old-school street-racer look with a modern twist. Think South London-style screamer, but with a totally modern driveline focus. The Lotus running gear was quickly sold off, and Tristam logged into his new number one online shopping store — Retro Ford. If the new direction for the driveline was now going to be modern, reliable, and powerful, then it also had to be in a majority of the install, totally bolt in. 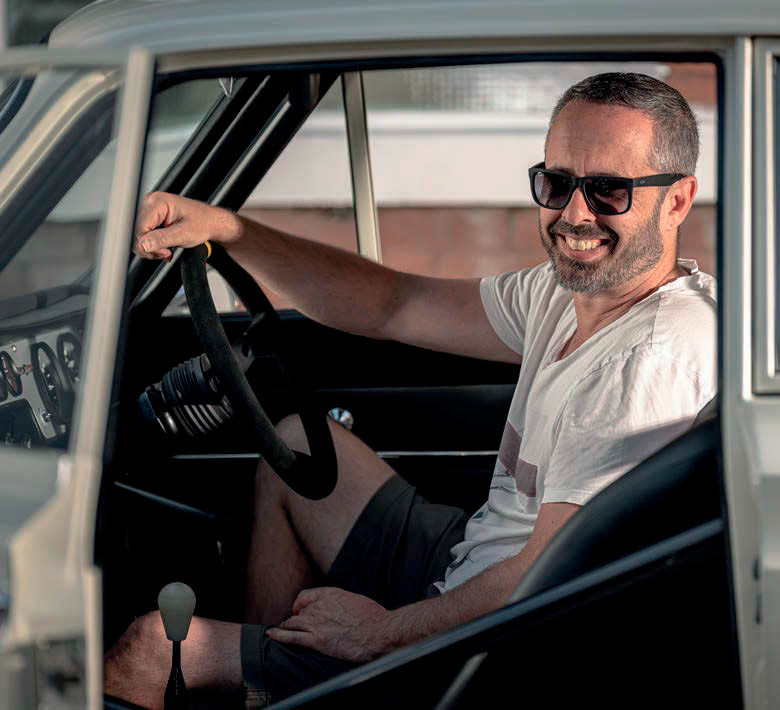 Dave Colledge from Retro Ford became the build mentor, showing Tristram what to use, and how to get everything and so much more from his set-up. The modern driveline option was now well and truly engaged, however, the exterior would not be modernised, in fact it would be sent back to when Ford Australia pushed it out on the forecourt back in 1966 as a 240 model. This was the lower spec to the slightly more luxurious 440 and sporty GT, and meant Tristram soon had the Sherwood Green Lotus stripe removed, and the shell repainted in eye popping Artic White. 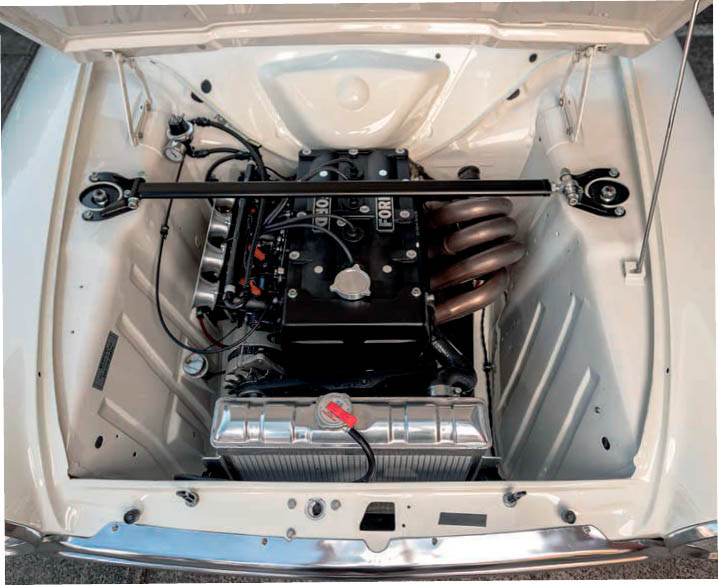 Back in the 1960s, the inside of a 240-spec Mk1 was a very basic experience, and if you managed to find a heater, well this normally meant the Ford dealer liked you. Tristram knew he wanted a fun place to power shift through the gears, and this meant the best of everything he could factor in. The dash is all Lotus, with the correct Smiths gauges, and a trick MOMO steering wheel to keep it all retro cool. Only two people get to have fun inside, with a grippy new set of Cobra buckets designed to emulate the old-school aftermarket 1960s/1970s seats. The black Williams harnesses are perfectly suited as well, and roll cage and distinct lack of carpet screams street racer to anyone who looks inside. The hard graft involved in getting the floor of the Mk1 to look the way it does is equal if not more than what it took to prep the exterior metalwork. The reason is the amount of curves and bends that made sanding and prepping so much harder to complete. The end result is amazing, and the way it flows from the front to the rear boot area is visually stunning.

As with every great Ford, we all clamber to see what’s under the bonnet, and after knowing it’s going to be modern, at first glance, you would think you have just spied an older BDA twin-cam which is odd. What you are in fact looking at is a covertly disguised 2-litre Zetec twin-cam.

Behind the mint twin-cam install is a well designed set up courtesy of Retro Ford. Tristram knew that the Zetec needed to sit correctly, operate reliably, and meet all the local registration requirements. Retro Ford stepped up to the challenge offering up the engine crossmember, engine mounts, flywheel, quickshift kit and two-piece propshaft. Internally, the Zetec is stock, but it does have a set of 45 mm throttle bodies, wild looking Retro Ford exhaust manifold, and rorty custom 2.5 inch freeflowing exhaust. Mazda then stepped in and supplied the close-ratio five-speed which was liberated from underneath an N7 MX5. Retro Ford handed over one of their lightened flywheels which was mated to a custom heavy duty ceramic paddle clutch and is complimented by more Retro Ford goodness in the shape of a quickshift kit. The final stop is the diff, when the factory 240-spec English axle is filled with an LSD centre and heavy duty 18-spline axles.

Under the mint panels is super sorted suspension and brakes with GAZ adjustable shocks, rebuilt and lowered springs, a bigger anti-bar and vented discs and race pads. The combination of arrow straight white paintwork with only a hint of chrome trim is timeless. Set off to perfection with a set of iconic John Brown Wheels-supplied 7x13 inch Minilites in silver shod in porky 185 Yokohama tyres, the final look is the stuff we dream about. The stance is simply sublime. Back to Tristram, who explains why you are seeing such a visual treat. “After starting off heading towards the road race Lotus style, we realised we wanted more street race stripped out minimalist look. I have always loved that bare bones look, nothing too fancy or chromed out, just an all-motor screamer. The driveline is awesome, and a power upgrade is now on the cards, and maybe a supercharger as well. Right now, after such a long build, I just want to enjoy it as much as possible”.

This is a rare build that brings the very best of the old school style together with the very best new school technology to create a sure fi re street screaming success. Despite the date of manufacture being some 56 years ago, this is a Mk1 Cortina that has been reborn, refreshed and returned to the roads with all the stylish intentions it was made with, only this time the rev limiter is a lot higher and the cool factor is off the scale.

Above: Minilight-style rims keep you guessing. Cortina is perfect for late-night blasts around Sydney (below).

Classic lowback buckets and Willans. Harnesses keep it modern and period. Finish is exemplary throughout this build.

NOT THE ALLAN YOU KNOW SIGNED BY A CHAMPION

Did you spot the signature in pen on the black glovebox lid? If you have only ever heard of Alan Mann, and not Allan Moffat, don’t worry, because the Allan of the Moffat variety made sure his driving did all the talking. Now long retired from competitive driving, Canadian-born Allan Moffat OBE is revered as a living legend down under. His accolades behind the wheel from the 1960s to the late 1980s are astounding — Australian Sports Sedan/ Car Champion, Australian Endurance Champion, FIA Touring Car and World Touring Car Champion. He won the prestigious Bathurst race five times, starting his career in a Lotus Cortina in 1965 and finished it off behind the wheel of Sierra RS500 in 1989. Tristram’s father was lucky to have a chat with Allan at an event, and had him sign the glovebox, which has now become a highly prized addition to the Mk1 Cortina. Allan’s exploits can be watched on YouTube, and the video of him shipping his Falcon coupe to the US to develop it is a must-watch to see how dedicated he was to success.

Fed by 45 mm throttle bodies (below), the 2-litre Zetec looks right at home in the Cortina’s bay, aided by the BD-style cam cover. Cortina’s interior is deceptively simple — there’s a huge amount of hard work gone into here.