Ford heritage: For Jason Cook, going to look at a car that’s lived by the sea for most of its life didn’t fill him with much hope, but with this special edition Cabriolet he was in for a surprise in more ways than one.

Jason Cook had his heart set on a tin top XR3i, but when he struggled to find a good example within his budget, he began looking at the soft top version. With a little patience and luck, he managed to track down one of the most original and immaculate Mk4 XR3i convertibles we’ve come across. Jason has been a huge Ford fan as long as he can remember, his first car was a Mk2 Escort 1.3 in beige, bought for the sum of £250. “I still have fond memories of that car, but by the 1990s I’d moved on to an XR3i,” Jason recalls. “I used it to travel from the UK to Germany and back for years and it never missed a beat.” Fast forward to 2015 and Jason began reminiscing over those magical days spent driving across Europe in his XR3i. Before he knew it, he found himself scouring the classifieds to gain an idea of current values. “I was intent on buying a hardtop, just like the one I’d had before,” Jason recalls, “I just couldn’t seem to find one in good condition for a reasonable price.” 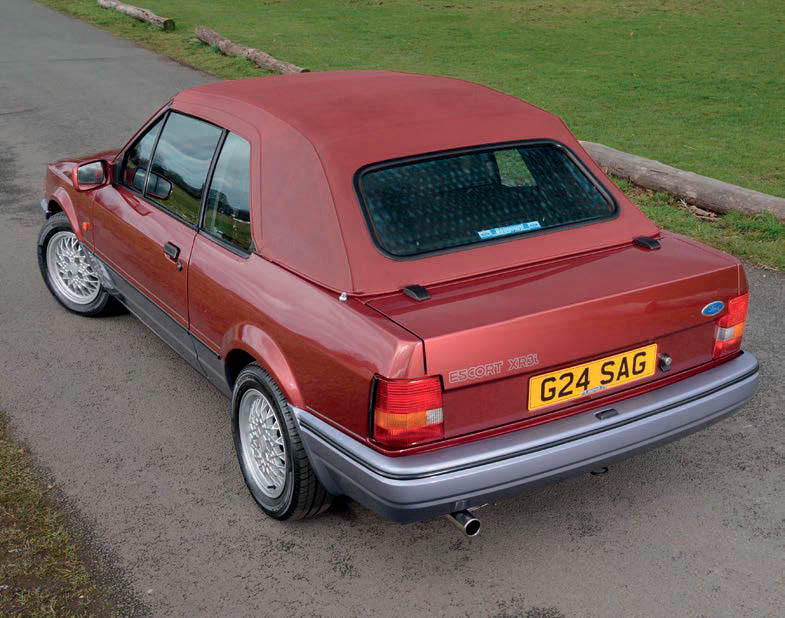 As he trawled his way through the classifieds, Jason noticed convertible XR3is were still quite a bargain in comparison and soon his criteria switched to include the soft top version, a major seller for Ford in the late 1980s and early 1990s.

“After a few conversations with my wife, we set a budget, and I started to search in more detail,” Jason continues. “It had to be a rust-free example with a good history and low mileage.” Even in 2015, that was no easy task and greatly reduced the pool of suitable available cars on the market. 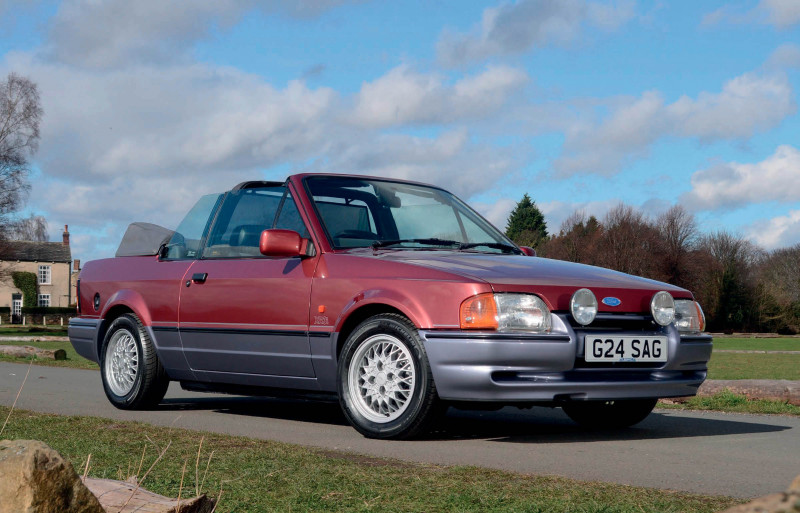 “Over that summer, I kept my eye on a number of cars that seemed to fit the bill and to see if they hung around or sold quickly,” Jason continues. “There was one in particular that was slightly out of my price range which remained on the market unsold.” Initially, Jason was a little hesitant to take a closer look as there may have been a good reason no-one else had already bought it. It was also located at the seaside, often a haven for rusty old cars. “My wife encouraged me to at least go and view the car and if it wasn’t up to scratch, at least we could have a day out at the seaside,” Jason smiles, “so I took a cash deposit with us, just in case!” 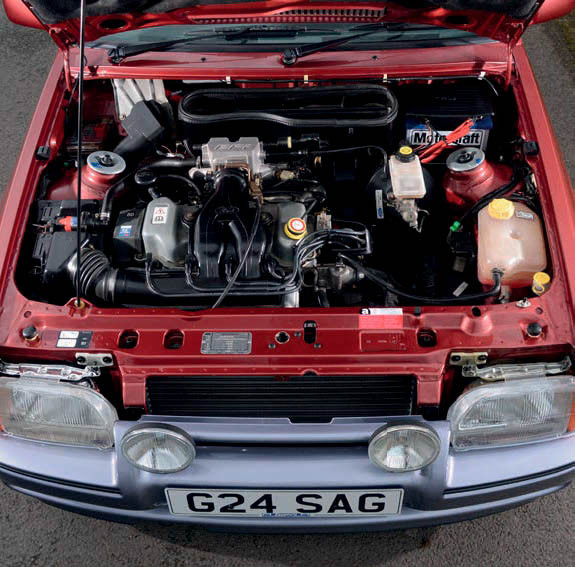 Upon arrival, the vendor Paul opened the garage and the German-built special edition 1989 XR3i in an attractive Flambeau Red over Moonstone didn’t disappoint. “There was no rust to be found anywhere on the car, even around the battery tray or on the panel under the fuse box, which are notorious weak spots on these cars,” Jason recalls. “The rear arches were all original and the underside was free of any corrosion, too.” A thorough check of the paperwork revealed the indicated 35,000 miles to be genuine and there was no mention of corrosion on any of the previous MoTs. “The only negative points I could find were spongy brakes and a rough idle during a test drive,” Jason recalls, “but these made handy bartering points, so they didn’t put me off.” A price was soon agreed, and Jason was finally the owner of a Mk4 XR3i once again. 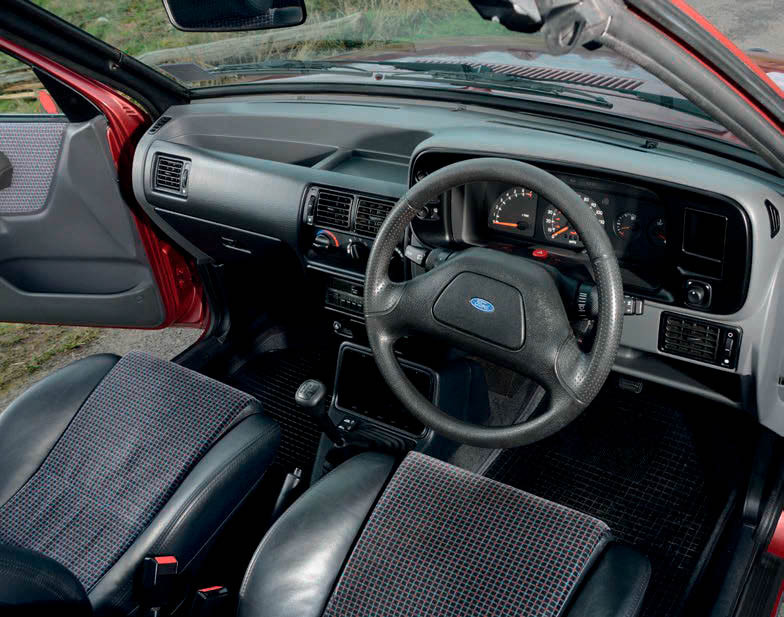 “I planned to keep the car as standard as possible, any modifications wouldn’t have done it any justice,” Jason explains, “I always use OEM parts where available and often use Gates who have a good reputation.” Standard service items are still easily obtainable we’re told, and Jason has since replaced the water pump, cambelt, wheel bearings and brakes. 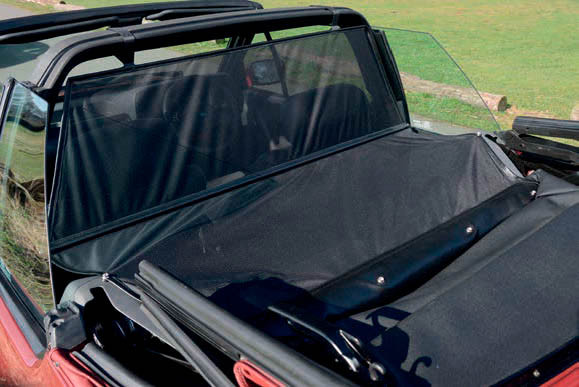 While new discs and pads sorted the brakes, the rough idle and running issues were put down to a worn idle control valve. “I managed to track down an original NOS replacement,” Jason points out. “Once fitted and calibrated, I cleaned out the throttle body and took it for a test drive.” The 105 bhp CVH ran like a dream as it still does to this day.

The original trademark BBS-style alloys were beginning to look past their best and these have been expertly refurbished in their original Ford silver by Barnsley-based Metal Magic. “The spare wheel has never been used and still has its original tyre from new,” Jason adds.

The Escort arrived with a standard mild-steel exhaust which after a short while was in need of replacement. “I decided to replace it with a stainless-steel system from Keltec,” Jason explains, “this was primarily for longevity as a standard replacement would constantly rot out each winter.” The bespoke manifold-back replacement has been designed to retain the XR3i’s original exhaust note, while Jason also fitted a K&N panel filter to help the car breath a little better.

Jason has clocked up just 2500 miles in the past seven years and with such a low mileage under its belt, the push XR3i interior still looks fresh and feels like new. The electric power hood, electric aerial and heated windscreen still work as they should and there’s no power steering or ABS system to worry about. Jason has since joined the XR Owners’ Club, where he’s gained a huge wealth of information and knowledge, more than a few trophies have been won at shows too!

Just 1773 special edition XR3i Cabriolets were produced in Germany in 1989 and 1990, with Bahama Blue over Moonstone and Flint Gold over Grey being the other available colour options — while all cars received the same trim level. How many of those still survive, we’re not sure, but it’s great to see a rare and often overlooked Escort variant kept in such fantastic condition.

THE SEARCH FOR NOS

We all know modifying old Fords can be expensive but keeping a classic OEM can sometimes work out quite costly too. Those hard-to-find parts can often come with an eye-watering price tag as Jason soon discovered. “I noticed the nearside headlight wasn’t original, which meant tracking down the correct Carello part,” he says. “It took me 4 months to find one and cost a significant amount.” Sourcing a new old stock idle control valve created a similar scenario, but wrapped in its original Ford packaging Jason was relieved he could at least find such a scarce genuine part. It’s a price we often must pay in order to retain that all important factory specification.