This Buick had lived in South Africa and Holland before it was acquired by Mark Hatton, who has driven it all around Britain and to France. And it’s the perfect car for long-distance touring, as he tells Zack Stiling…

Bleak, remote and half-shrouded in mist, Britain’s moorland has gripped the imaginations of superstitious villagers and romantic writers over the passage of centuries. Bodmin has its elusive Beast, and Dartmoor, the Hound of the Baskervilles. Now, in the Brecon Beacons, a far-off rumble reverberates through the bracken. A form appears on the horizon, throwing up thick dust clouds as it swoops down on us, all glowing eyes and shining teeth. It’s all right, though – it’s Mark Hatton out for a spin in his 1948 Buick Super Sedanet. 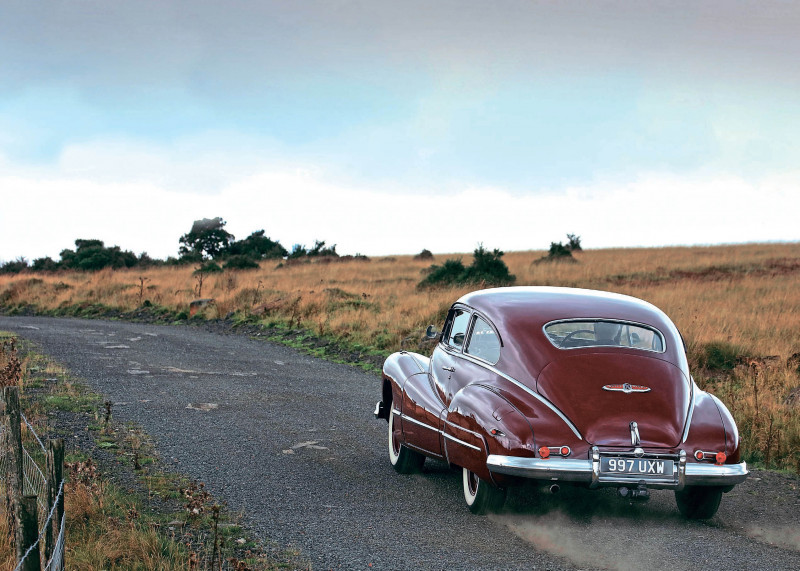 “IT’S NOT PARTICULARLY FAST BUT EVERYTHING FEELS ROBUST AND WELL-BUILT. IT’S GOT A LOUSY TURNING CIRCLE, WHICH IS ENTIRELY TYPICAL. IT’S GOT GOOD BRAKES FOR THE PERIOD – BIG OLD DRUMS WITH TWO-INCH SHOES...”

For 20 years, he’s been driving everywhere in old cars, as he explains: “I moved on from old Brit bikes and Hondas. I felt I’d done enough with them, and my two daughters were growing up, so I started exploring my interest in old cars so that we could travel together. I started with the usual Fifties British stuff, and this Buick was my first American car which I bought in 2008. 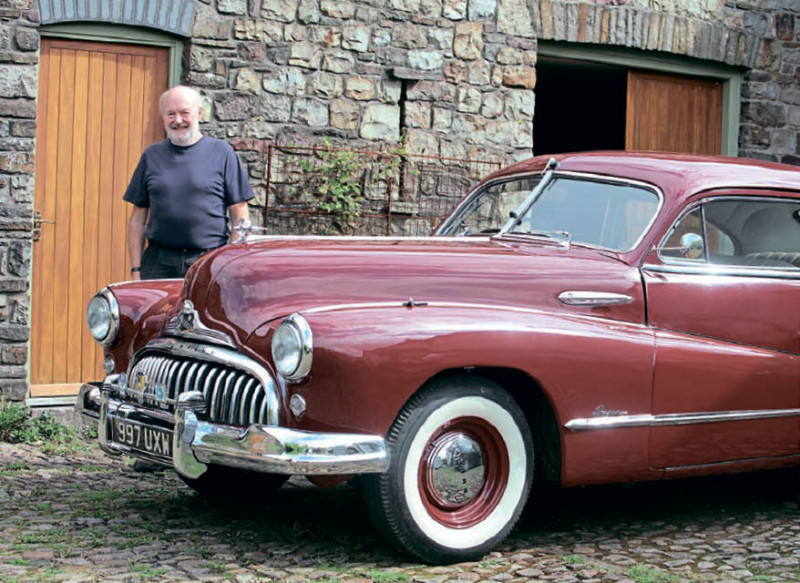 “I went to the States in 2007 because my daughter got a placement at an American school in her gap year before university so we went over to visit her and when we came back I thought, ‘I want to buy an American car.’ I bought Classic Car Mart, and there was the Buick. The problem was that it was in Holland, but because it was right-hand drive it was virtually unsaleable over there. 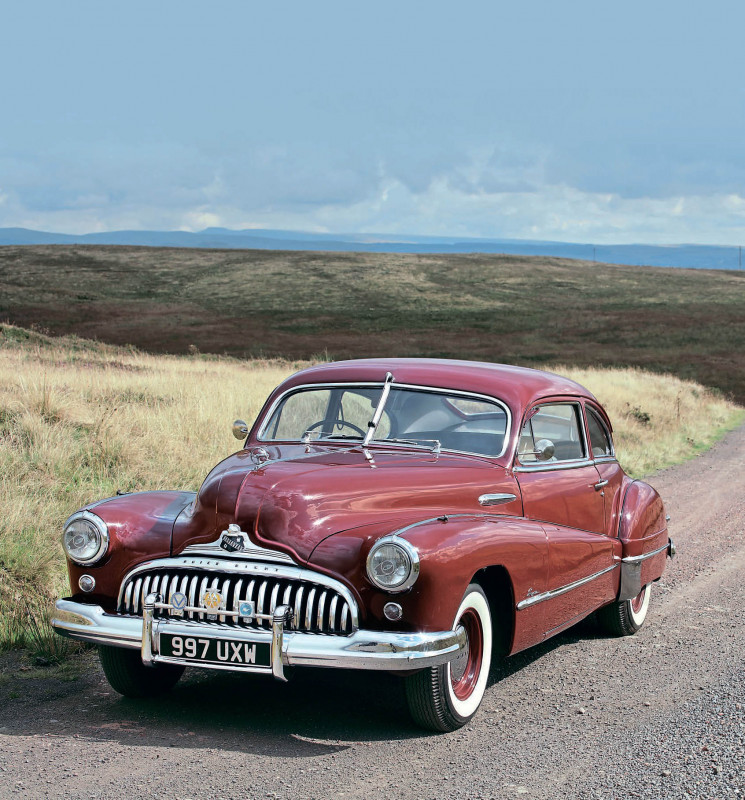 “It was a South African import. The bloke who had it found two identical Buicks in Johannesburg and bought them both. Obviously, he didn’t want right-hand drive in Holland, so he converted one to left-hand drive, bought a Camaro, ripped it apart and stuck the front clip, engine and transmission into the Buick, which he slammed and custom-painted, and that left him with one standard Buick. He was in Utrecht, so we went and had a look at it. It was in his shed and you couldn’t drive it, but it just about started.” 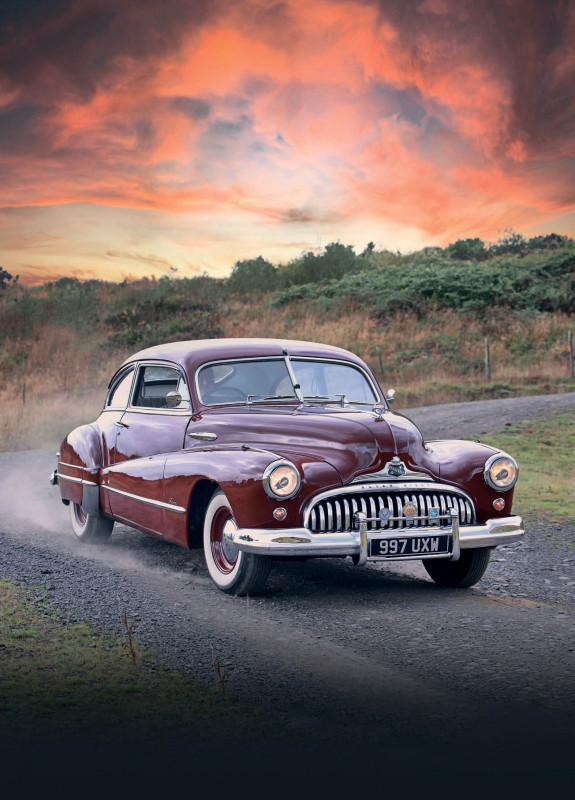 Mark decided he could revive the languid Sedanet, so had it collected from the Continent. “It had been restored about 20 years before, but not very well,” he says. “It looked shiny and the paintwork was a kind of commercial job, but it was okay. The chroming had been done poorly and the motor had been rebuilt. I didn’t know the condition of the gearbox and the rear axle, but they worked okay. The interior was a ghastly dark brown nylon moquette which had obviously been done in South Africa. I had to rebuild the brakes and sort out the electrics, which took six months or so and then I started to drive it around.” 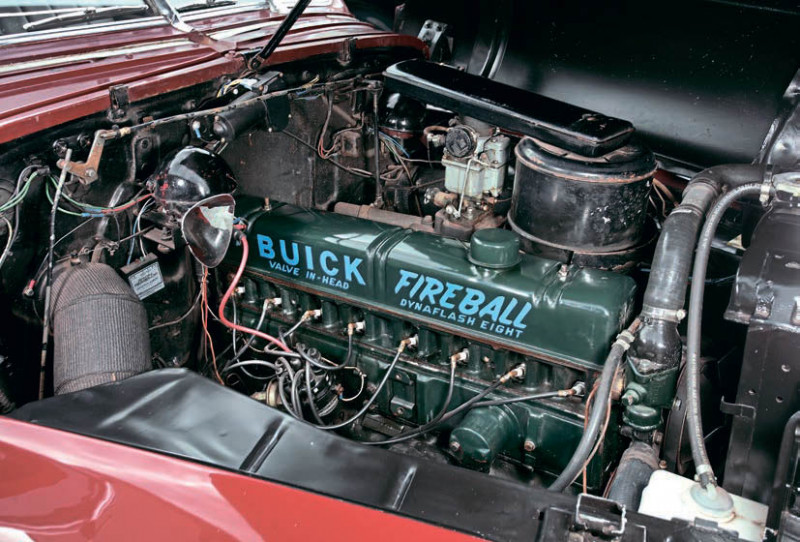 Mark’s interest covers everything from the dawn of motoring to the mid-Nineties. Besides this Buick, the collection includes a 1918 E45 tourer, a 1937 Special 40, a 1962 Cadillac Sedan de Ville and several British cars from a 1929 Rolls-Royce onwards. What Mark likes about Buicks is “they’re great quality, good value, properly built cars with decent status, and they’re quite unusual in the UK”. The ’48 has an appeal of its own, thanks to its extravagantly rakish fastback. The fastback, or ‘Sedanet’ in Buick-speak, was something of a General Motors speciality in the Forties. Chevrolet, Pontiac, Oldsmobile and Cadillac all offered their own, but the Buick’s roofline had a more pronounced curvature which contributed to its phenomenally spacious interior. Comments Mark: “It’s a six-passenger car, which for a two-door is unusual. There’s masses of legroom – it’s huge inside. That’s what the bulging fastback gives you.”

Buick emerged from the war in a strong position because it had debuted an all-new model in 1942, and an especially modern one at that, placing it well ahead of rival marques which had to squeeze a few more years out of their stodgy old 1941 offerings. The other great styling cue besides the fastback was the sweeping ‘airflow’ fenders, as popularised by California customiser Harry Westergard.

Buick’s ’42 tooling lasted until ’49, with minimal changes until its final year. Post-war, the Series 50 Super occupied the middle rung between the Special and high-end Roadmaster. Each model had its own straight-eight, the Super getting a 248cu in unit producing 115bhp. The 56S Sedanet was a popular model, accounting for 33,819 units out of a total 1948 production of 213,599 cars, with a basic price of $1987.

Mark estimates that he’s put 15,000 miles on his Sedanet. “I don’t have a modern car so I do actually use these things. I drive to work in the 1918 Buick as long as it’s not raining too hard,” he continues. “I put a towbar on the Sedanet five years ago and used it to tow our smallish caravan to France twice. When my daughter lived in Manchester we’d go to Manchester in it, and my parents live in Wiltshire so we’d go there in it as well…” 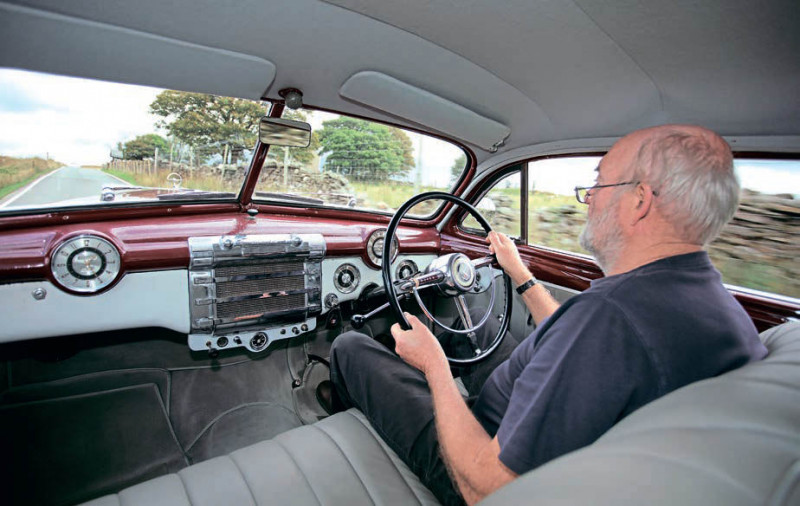 Mark emphasises ‘go’ rather than ‘show’, but he attends the Rally of the Giants without fail and it was at Blenheim Palace in 2021 that he scooped the Best Buick award. He had to put the work in to get it to an award-winning standard, though. As he says: “Just about everything went wrong eventually, but not the engine. That’s still as I purchased it. I haven’t even had the sump off it, which is unusual for me. I’ve had the gearbox out twice to have the flywheel refaced and fit a new clutch. I’ve had the rear axle rebuilt and the crown wheel and pinion reshimmed, plus it’s had new wheel bearings and brake shoes.” It benefited from a full retrim in 2014. “Prior to the retrim I did a lot of work on the inside and discovered it had originally been light grey, which pleased me because it’s a nice colour to go with maroon. 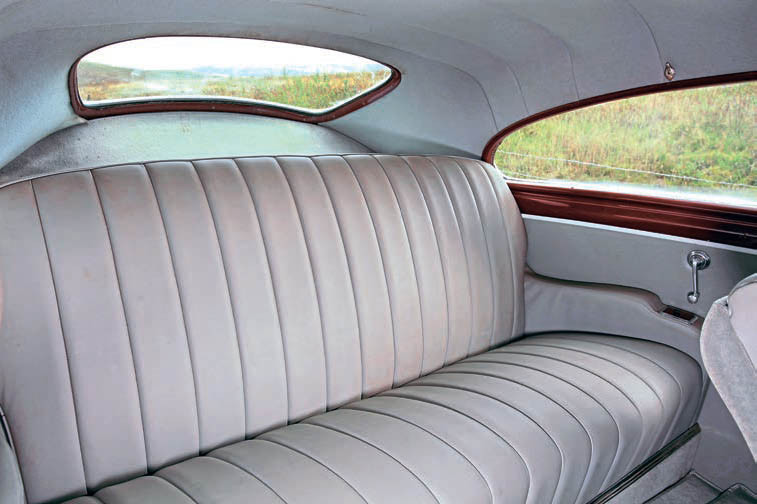 “IT’S A SIX-PASSENGER CAR, WHICH FOR A TWO-DOOR IS UNUSUAL. THERE’S MASSES OF LEGROOM – IT’S HUGE INSIDE. THAT’S WHAT THE BULGING FASTBACK GIVES YOU.”

“It had quite a hard life in South Africa. It was not cosseted and had a quite heavy shunt on the nearside, but that’s been properly repaired. The rear has had quite a lot of work. I imagine it must have been parked up for a long time and gone rusty. South Africa is supposed to be pretty dry, but in Johannesburg there’s a salty atmosphere. I did a lot of work on the body when Covid struck to occupy me during lockdown.”

Being South African, Mark’s Buick is quite a rarity. He’s heard that in 1948 Buick only exported 100 of his model to South Africa, although he’s not sure if that means 100 Supers or 100 two-door Sedanets. Besides his example and the other Dutch car, he knows of two further survivors. One he discovered on the internet but the other, remarkably, turned up just along the coast in the hands of a Port Talbot collector.

Having driven all over England and Wales and into France, Mark has formed some detailed opinions of the Buick. “It’s typical of immediate post-war American cars,” he says. “It’s not particularly fast but everything feels robust and well-built. It’s got a lousy turning circle, which is entirely typical. It’s got good brakes for the period – big old drums with two-inch shoes – and the suspension’s good. It has a go-anywhere feel to it. It’s got great ground clearance which is why I tow with it, and it’s really good for pulling a one-ton caravan. It still cruises at 50-60mph, no problem. It returns around 10½mpg with the caravan but generally it does around 12½. “On a run, it’ll return 16mpg if you keep the speed down.

“Spares are easy. There’s one supplier called Bob’s Automobilia in California which has everything from about 1924 to 1958. This makes Buick ownership really practical. Other suppliers charge the earth and really hit you on shipping for being outside the US, but Bob’s perfectly reasonable. In the States you can get the really esoteric bits. When I had the gearbox apart, I needed a new intermediate gear and Bob didn’t have one. I found one on eBay in Texas. There are lots of spares out there because they made such a large number of them.”

The famous Dynaflow launched in 1948 but only as an option on the Roadmaster; everything else had a three-on-the-tree manual. “I haven’t owned a Dynaflow,” Mark says, “but Bob and other enthusiasts have said they’re a bit sluggish as they’re only a two-speed. The three-speed manual is great. By today’s standards it’s slightly low-geared, but there isn’t an easy way of changing that. GM did fit overdrive to some torque-tube cars but it’s like hens’ teeth. It would be nice if it had an extra gear, especially on motorways, just to make things a bit quieter, not that it’s especially noisy.”

The Sedanet’s definitely a keeper, but what’s next for the man who owns three Buicks? “I’d quite like a mid-to-late Fifties one. It’s those wet Sunday afternoons in January and the internet that make you think ‘just one more…’” We quite understand, Mark. We quite understand…

115bhp 248cu in Fireball straight-eight. 33,819 Sedanet models were built in ’48. Split hood opens from either side. Right-hand-drive Buick started life in South Africa. Smart retrim looks like Bedford cloth. Mark has driven the Buick all over the UK and Europe! No Dynaflow here, just three-on-the-tree!