Upon reading the term sports saloon, we’d wager a fair few of you conjured up a BMW roundel. After all, the Munich maker has tried to corner this market segment for more than 40 years, earning fame by making fast, class-leading saloons.

If the Seventies had been formative, then the Eighties were transformative. The BMW 2002 (E10) and first-generation of 3-Series (E21) had set the blueprint for Munich’s take on the fun driver-oriented four-seater. The second-generation (E30) took that baton and ran with it.

The badge was undoubtedly one of the main draws, but its clean and boxy Boyke Boyer lines – penned under the gaze of Claus Luthe – also helped make it an icon of the era of excess. Just below the homologation-special M3 at the top of the tree was the 1985-on BMW 325i Sport E30.

A yuppie favourite, this six-cylinder sports saloon proved as moreish as a certain white powder, though fortunately driving a 325i provides the kind of high that keeps your septum intact. Let’s get the obvious out of the way first. This BMW has two rather than four doors. In classic BMW circles, more doors mean less desire. That’s reflected in the vast differential in values between two- and four-door E30s. Often wrongly described as a coupé, the 3 Series in front of you is, in fact, a two-door saloon. A clear pecking order was established early on – the four-door was aimed at the family man, the two-door was for the young, thrusting executive. This E30’s cabin therefore does sacrifice a little rear passenger leg and head room… well, quite a lot actually. If you’re older than eight you will struggle to fit comfortably. Front passengers are, however, amply ensconced.

Cosmetically enhanced with ‘M-Tech’ aerodynamic goodies – incorporating a revised front splitter, rear apron, skirts and wing – the UK-market 325i Sport we have here was noticeably slicker. The transformation wasn’t just skin-deep; it got a stiffer chassis via revised gas-filled dampers, new lowering springs and thicker anti-roll bars. Wider rubber was also deployed to make the most of these enhanced abilities – 6.5J 14-inch from 1986, seminal 7J 15-inch BBS alloy wheels thereafter.

Slipping down into the driver’s seat is like sliding on a pair of warm socks. The seat is by far the most supportive of our group, with the Sport’s three-spoke leather steering wheel positioned perfectly. In an age when brand image was becoming of paramount importance, it’s no shock to see the BMW M Power badge staring you right in the face. This overwhelming first impression when readying for a drive in this BMW is that it feels tailored rather than assembled. Its centre console being skewed toward the driver is a subtle nod that this machine’s interaction with you is the most important part of its existence.

Dynamically, the 325i Sport is close to revelatory for an Eighties product. This era represents BMW’s halcyon days, when it barely put a foot wrong. Turn into a tight corner at speed and this E30 fanatically holds its line. If you pile on the speed, its 205mm front tyres will gradually begin to push wide, but adding a little throttle translates understeer into mild oversteer, which is wonderfully linear in its transition. The tail-out trademark BMW heroics prove to be surprisingly difficult to replicate.

The 325i is one of those models that previous owners wish they’d kept hold of – not only is it fantastic to drive, it’s also appreciating faster than bitcoin. Retro car fanciers in the States are largely responsible, as are the car’s innumerable appearances in music videos over the past decade. The Eighties has become the decade of cool, and few products from the era have become as coveted as this shark-nosed symbol of success. Entry into this six-cylinder culture club starts at around £8000-£10,000 for a two-door or £5000-£7000 for the less popular four-door. The M-Tech model is in another league entirely, with nothing short of £20,000 needed for even a high miler – the very best are now topping £50,000.

The insulation in this BMW mutes the theatrics a bit too well, that six-cylinder engine only making itself known above the background at high rpm. Wind noise is louder than in a contemporary Mercedes-Benz 190E W201, but thankfully you can still hear the engine having a workout. The 2.5-litre M20 at full chat reminds you that Munich used to make some of the angriest sounding six-cylinders out there.

‘Dynamically, the 325i Sport E30 is close to revelatory for an Eighties product

Ryan Corton has been a self-confessed BMW nut for most of his driving life and bought this 325i in 2019 after noticing the supply of good examples had diminished. ‘I always wanted one, I remember them well from my early teens. I looked through magazines and online, and came across this one up near Bradford. The car was about half as good as it is now, but was still worth buying. It was off the road for a year getting various things done, including new linkages for the transmission, a new clutch, various bushes and hoses and a new oil pump. That all came to £2500. It was like new afterwards and it’s been an absolute joy since. I bought it right on the brink of the pandemic, so I’ve haven’t used it as much as I’d hoped, but it’s still cost between £400 and £600 a year to service.’

Driver-focused cabin with M Power badge on wheel Anger without over-management under the bonnet BMW’s sharp Eighties lines are all about aggression.

‘The BMW is old enough to look and feel special, yet new enough to still use regularly’

All of the sports saloons featured here offer something different and are all compelling in their own way. The Ford Cortina 1600E excels as a comfortable yet swift cruiser, though it lacks excitement behind the wheel. Nostalgia and looks are on its side, plus there’s no shortage of buyers. Along with the BMW, it’s probably the safest place for your money.

The MG proves surprisingly entertaining, in spite of its modest performance and relative simplicity. The Magnette is a doddle to upgrade, doesn’t cost a lot and rarely goes wrong, though there’s not much of a market for them out there. The Dolomite is loud and lacks finesse in the cabin, although driving it will probably put a bigger smile on your face than any other car here. The engine’s great fun to rev out and the chassis, though not as accomplished, does a fair job of keeping up. Objectively, the BMW E30 is the best machine here. Its grip is prodigious yet not so much it saps the fun, even at sensible speeds. You won’t want to do those, though – this 325i pushes you to go that bit faster. Values have climbed steeply, though a lot of frankly average examples offered for sale recently have seen the model plateau. This will likely be the case for the short term until demand outstrips supply and we see another climb. That leaves us with the IS300. The stereotypical image of the Lexus brand doesn’t bond at all with the experience of driving this incisive saloon. Its chassis is as good as the contemporary BMW (E46), yet it’s yours for roughly half the price and is considerably rarer. Finding one that hasn’t been modified will be your biggest challenge, although £5000 will easily bag you a great and largely forgotten sports saloon.

Finding an outright winner among such a diverse bunch isn’t easy, but if it were my money I’d probably have to go for the BMW – although the temptation of buying most of the rest of these models for the same £20k outlay is also a tempting prospect. The E30 has a toe in both the classic and modern spheres. It’s old enough to look and feel special, yet new enough to still use regularly without having to be on first-name terms with your chiropractor. I’d probably regret it the first time I saw a Dolomite Sprint or MG Magnette out on the road, but once I was on a Welsh mountain pass or Yorkshire moor top route, I’d soon remember why it was the right decision. 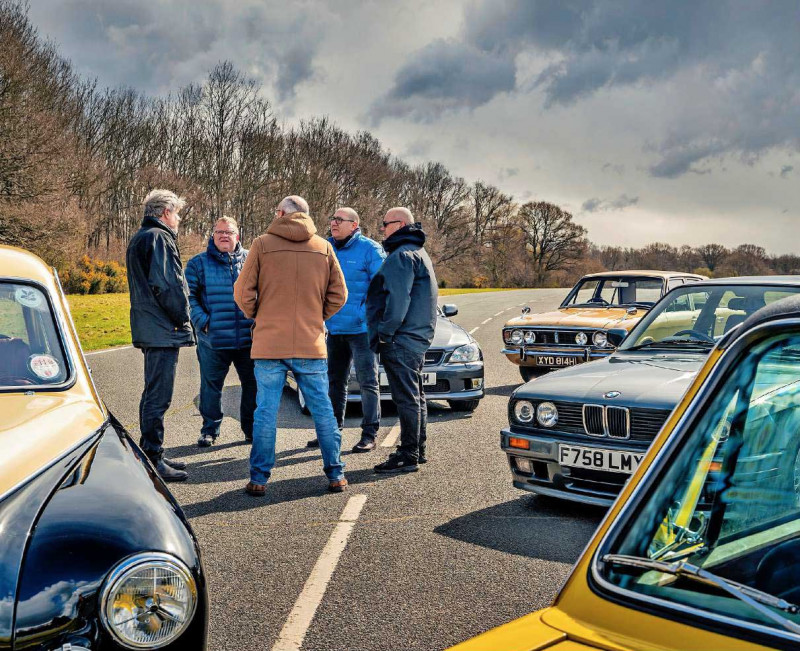 They’re all lucky owners, but whose drive home do we envy the most?