If you’re going to build your dream race Capri, what better than to draw on the original RS3100 Touring Cars for inspiration?

Inspired by the golden age of early 1970s Touring Cars when Capri RS3100s were a regular sight on our circuits, Bob Ryder had the brainwave to create a tribute to his favourite car from that era. Not only is this Mk1 Capri stunning just to look at, it also happens to have a 300 bhp V6 under the bonnet with no turbo or supercharger in sight, thanks to the talented skills of Ric Wood Racing. 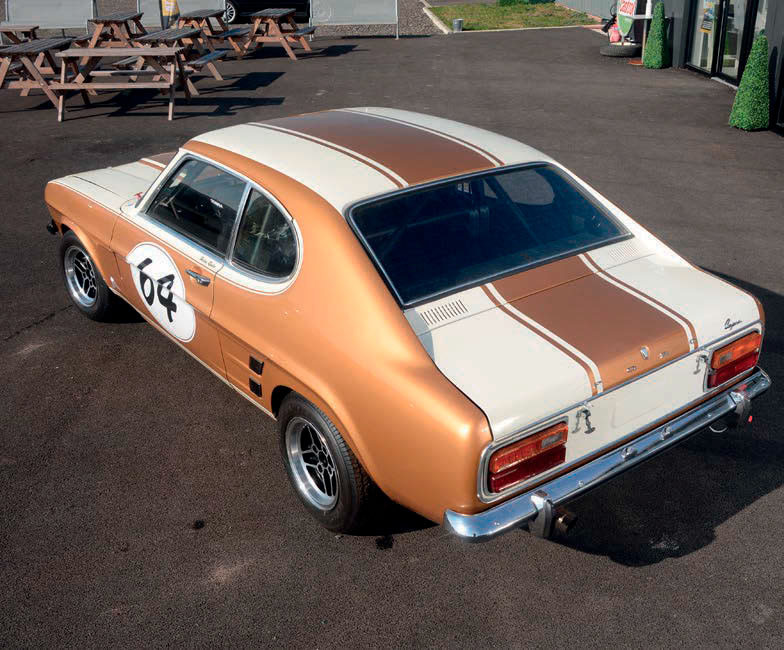 Bob’s connection with Mk1 Capris stems back to his youth when he was offered a bright red 2-litre GT for the bargain price of £200, “All my cars back then cost approximately £200,” Bob laughs, “I was often the last stop before the breakers’ yard.”

“I WAS OVER THE MOON WITH THE STANDARD OF FINISH RIC ACHIEVED, SO I ASKED IF HE COULD FINISH REST OF THE CAR TO THE SAME LEVEL”

The trend at the time was to jack the rear end and Bob’s Mk1 was no exception, “It sat high on its rear leaf springs with chrome eight-spoke alloys,” Bob recalls, “it was as cool as could be!” Only weeks later, the red paintwork was replaced by Diamond White while a black boot spoiler and twin circular headlamps all added to that typical 1980s custom trend. “It really looked the business at the time and since then, I’ve always had a soft spot for a Mk1,” Bob adds. 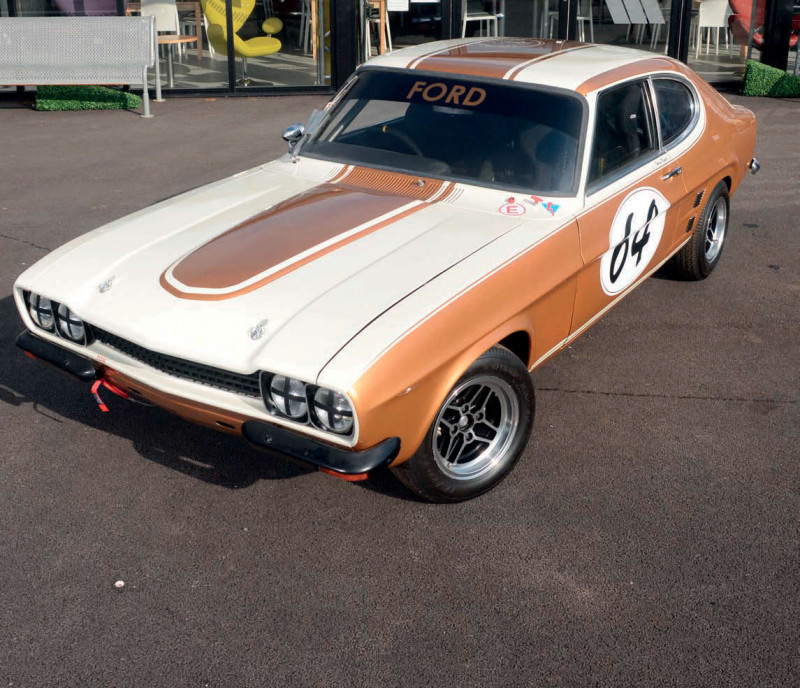 As family life took over, Bob switched to Mk4 and Mk5 Cortinas and he’s had countless other blue oval-badged classics and modern machinery throughout the decades, it’s fair to say Fords are in his blood. “I always planned to make a return to Mk1 Capris one day and the idea of running a sensible 3-litre road car came to mind,” he continues. “I also had a dream of owning a recreation of a RS3100 track car as together they would make the perfect pair.”

This wouldn’t be your average track car, right from the start, Bob was intent his latest Mk1 would be FIA compliant and able to compete in historic racing. “Essentially it would be based upon the specification of a Group 1.5 Touring Car,” he adds. A suitable base was needed first, and a 1972 1600GT caught Bob’s eye. “It was finished in my favourite colour of Sebring Red so I just had to take a look,” he smiles. “The car was located a fair distance away, but I had a feeling it would be worth the trip.” Originally purchased in North Wales and spending the majority of its life on Anglesey, this probably explains the low mileage of just 52,000. “It had been specified with a vinyl roof from new which was an extra £20 on top of its sale price of £1200,” Bob points out.

“I HAD MY HEART SET ON SEBRING RED, AT FIRST BUT RIC CONVINCED ME TO LOOK FOR SOMETHING LESS COMMON” 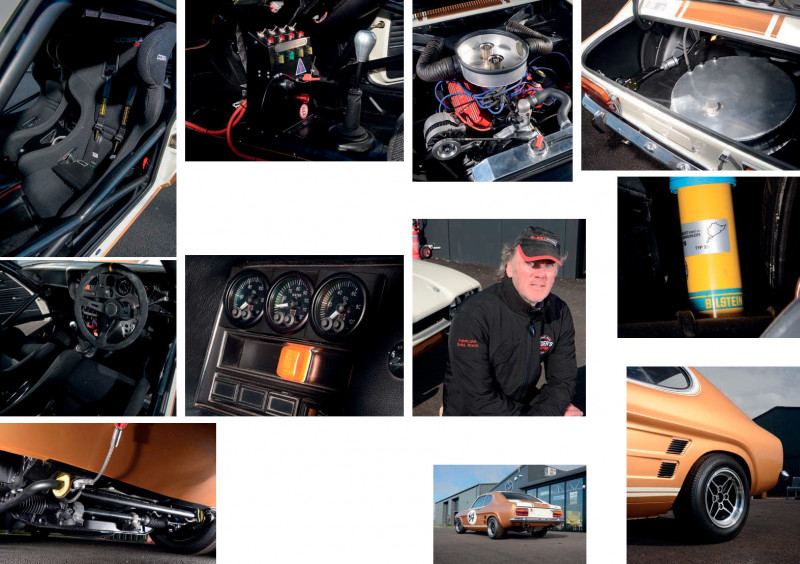 By the time Bob had the opportunity to view the Mk1, it had moved to Liverpool where the current owner had refreshed the paintwork, removed the vinyl roof and was in the process of fitting a 2-litre Zetec on bike carbs. “It turned out to be a very genuine car and hadn’t been messed around with,” Bob remembers, “so I knew it would make an ideal base for a Classic Touring Car.”

Although the GT was in a presentable and usable condition, the shell was soon stripped as Bob planned to swap out the running gear and interior anyway. “I managed to source a 3.0-litre Essex V6 which would be replacing the 1.6,” Bob recalls, “this was soon delivered to Whitegates Garage in Stockport.” As many of you will know, Whitegates Garage is the home of Ric Wood Racing and CNC Heads, so Bob knew his engine was in good hands. “They have an unrivalled reputation when it comes to V6 Capris, Ric really knows his stuff,” Bob continues, “and the aim was to achieve over 275 bhp in a naturally-aspirated engine.” Ric and his team had worked their magic, transforming the standard V6 into a ported, lightened, and balanced 3100cc running a Weber 48IDA carb. “It achieved 300 bhp on the dyno with 260 bhp at the wheels, so I was more than happy,” Bob smiles.

Not only are the power figures impressive, under the bonnet its quite a looker too, those red rocker covers and alloy ancillaries gleaming against the black engine bay. As you’d expect, the gearbox and axle have been fully rebuilt by Ric and his team with an LSD to cope with the significant increase in power from the engine.

“I was over the moon with the high standard of finish Ric Wood had achieved with the engine,” Bob remembers, “I asked if he could complete the remainder of the car to the same quality.” Ric was happy to oblige, and the rolling shell was soon transported over the Pennines to Whitegates Garage for its continued transformation in expert hands.

There’s little remaining evidence this Capri was once a 1600GT, the shell having been stripped, seam welded and strengthened throughout. Flared front wings, quarter bumpers and the familiar twin headlight grille were all essential for that RS3100 look. “When it came to choosing a paint colour, I had always set my heart on Sebring Red,” Bob admits. “However Ric, with his persuasive way, convinced me that my chosen colour was now becoming a little boring, so I began to look at alternatives.” As luck would have it, Bob had attended Silverstone Classic event the previous year and had distinct memories of a gold and white liveried Mk1 Capri. “I remember it looked stunning on track and with a bit of prompting from Ric, that was the colour combination we settled on.” You won’t be surprised to hear, Bob was more than happy with the result, and we can see why.

Uprated Bilstein suspension provides an aggressive lowered stance and in conjunction with an uprated anti-roll bar improves high-speed cornering. The brakes have been rebuilt with the addition of Ric Wood race discs and uprated pads, the omission of larger callipers meaning Bob could retain his favoured wheel design. “I just had to fit 13 inch RS four-spokes as they suit the Mk1 so well,” he says. And once again, we’d agree. Inside, the FIA full roll cage dominates the race spec interior, while those Corbeau race bucket seats hold the occupants firmly in place. Useful extra gauges are now housed within the dash while Ric has neatly installed a centre console containing the necessary switches come track time. Despite these notable Touring Car-inspired upgrades, it’s great to see much of the Mk1 Capri’s familiar interior has been sympathetically left intact.

By now, we don’t need to tell you that Bob was ecstatic with the end product, but we’ve come to expect nothing less from Ric Wood. The Capri is now part of the Ryder’s ever-growing collection, often to be found on display at NY500, their Pickering-based café which contains more than a slight hint of a petrolhead theme. Grabbing a burger and coffee while surrounded by classic cars which happens to include one or two very cool Capris sounds like the perfect day out to us!

Strict regs mean front suspension upgrades are limited to a thicker anti-roll bar. and better dampers.3.1-litre engine is the jewel of the build and sounds amazing.

Bronze gold and white livery has echoes of the Frami race Capris and looks incredible. 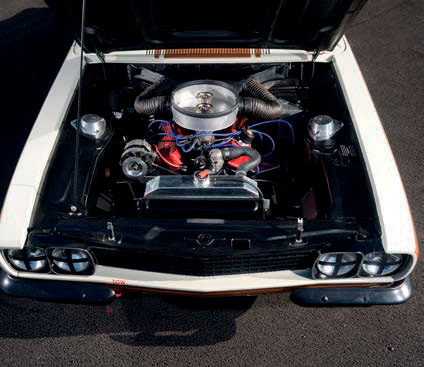 Bob’s now got himself his dream Capri. 7 inch fours-pokes fill the arches nicely.

While this Mk1 is stunning in every respect, it’s the 3100cc V6 lurking under the bonnet that soon becomes the main talking point. Not only does it look the part, like any Ric Wood engine, its built to perform too. The ported, lightened and balanced 3.1 now boasts 12.5:1 compression ratio pistons, 500 thou’ lift cam, steel rods, Weber 48 IDA carbs amongst its comprehensive specification. This adds up to 300 bhp at the flywheel and 260 bhp at the wheels, impressive figures for an NA V6.