With muscle car styling and a whacking great blower perched atop an unexpected engine, this Cortina is guaranteed to raise eyebrows — and pulses.

Supercharged Duratec V6 for this Mk3! 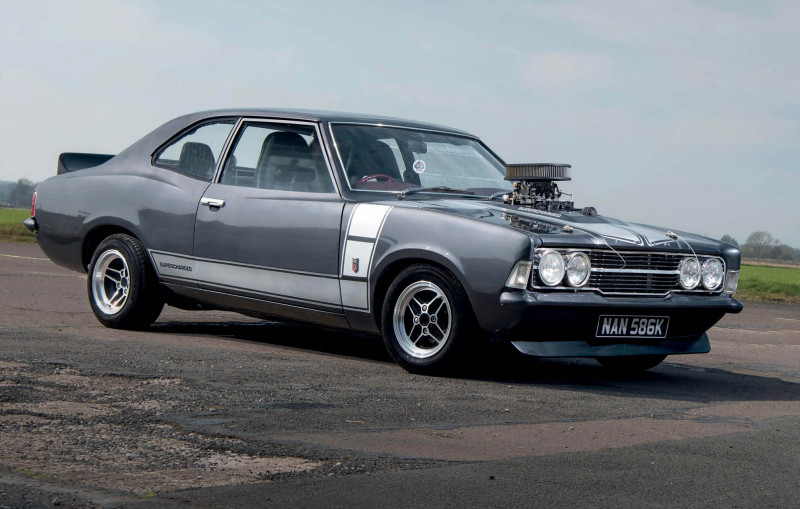 For as long as people have been tuning old Fords, there’s been an enthusiasm for shoehorning in different motors with the aim of achieving more power and more Saturday night kudos. Once upon a time, it was de rigueur to bolt an Essex V6 into a Mk1 Escort or Cortina; Pintos went into 100Es, YBs into Mk2 Escorts and, more recently, Zetecs and Duratecs into everything. And while all this has been going on, there’s a polarising issue at the heart of it all that drives a division between concours purists and horsepower junkies: swapping in engines from rival manufacturers. The huge number of classic Fords on the scene running Vauxhall XE and Honda F20C motors demonstrates that a lot of enthusiasts are totally cool with this manner of crosspollination, although there’s a hardcore of die-hards who will always feel that any form of non-blue-oval engine is complete anathema. What this Cortina does, quite cleverly, is to bridge the gap between the two camps, to pour a little oil on the waters before deciding to stir it up again for kicks. You see, this racy Mk3 is packing a V6 motor from a Jaguar… but as we dig under the skin, we discover that it’s actually a lot more Ford-like than that statement initially suggests.

But before we get to all that, let’s rewind back to the start. Matt Clark is the mastermind behind the endeavour, and he’s a man with a few tales to tell.

“My dad and I have done a few classic Fords between us over the years,” he explains. “We have got many modified Fords to enjoy, including an ST170-engined Escort, an RS1600i, and a Zetec turbo’d Mk4 Escort Cabriolet. So, a little while back we were looking for a father-and-son project to do, and came across the Mk3 Cortina. We loved the style of it, and knew we could turn it into something cool.” 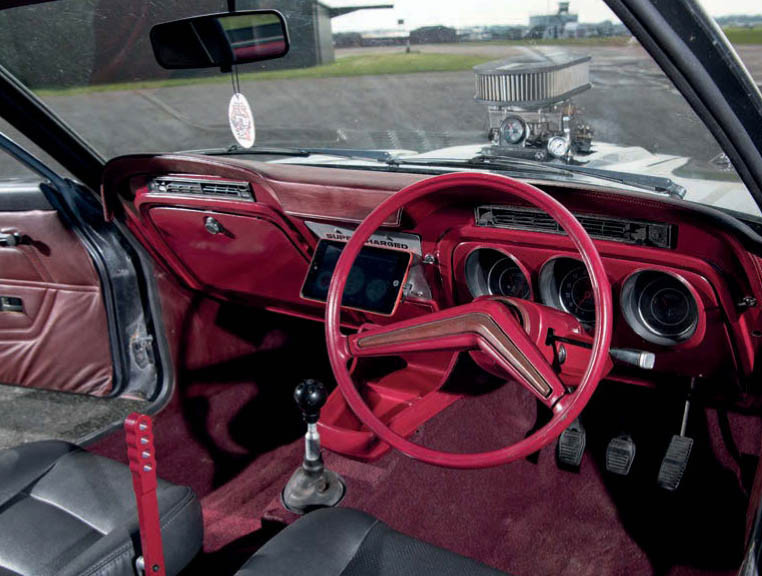 The appropriate project base was located on eBay, just a rolling shell with no oily bits and nowhere to sit, but the fundamentals seemed reassuringly solid. The fellas found themselves chucking in a couple of bids after one or two drinks on a Saturday night. “We were bidding without having viewed the car,” Matt deadpans. “Suffice it to say, we won the auction and it turned out to be worse than we thought. When we turned up to collect it, we could immediately see that we had a lot of welding ahead of us.” 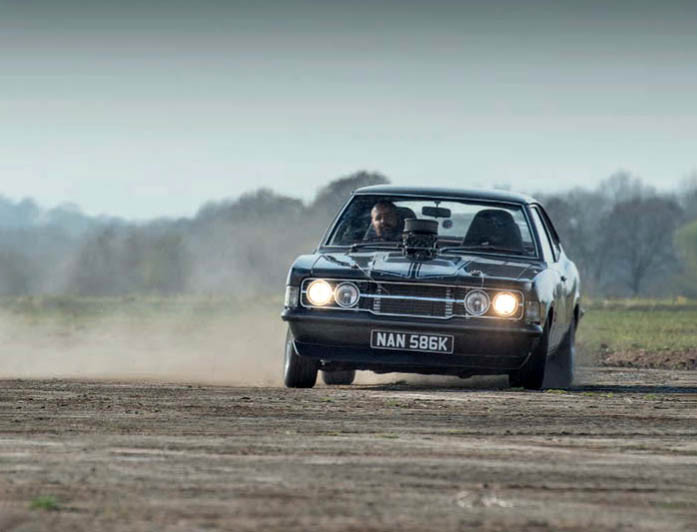 All part of the fun though, isn’t it? And while it was a slog to get the metalwork all solid, it didn’t really feel like a chore because Matt had the direction of the project mapped out right from the start: “I’d previously owned a Mondeo ST220, and loved the performance of it,” he says. “It’s when we were looking into the possibility of swapping in one of those motors that we realised the Jaguar S-Type has essentially the same engine, but with the correct gearbox for a rear-wheel-drive layout.”

He’d known from the start that this project would be something a bit out of the ordinary, and while that’s very much the case with this engine swap, there’s also an inherent logic and appropriateness to it. And so the hunt was on for a suitable drivetrain donor… which wasn’t actually as simple as you might think. Because, while S-Type Jags are cheap and abundant, it’s an undeniable fact that the demographic Venn diagram has quite a large crossover between buyers of Jaguar luxo-barges and people who don’t really feel like changing gear themselves. It took quite a bit of searching to unearth a 3-litre V6 Jag with a manual gearbox, and as soon as the nearmythical Sport model revealed itself, Matt pounced. “After months of hunting, we finally found an MoT-failure Sport for £300,” he recalls. And at that point, with the parts piling up like some magnificent Meccano set, the game was afoot.

OK, so perhaps the metalwork was a bit more arduous than we’ve made out: “We ended up making our own turnover stand due to the sheer amount of welding needed,” Matt remembers with a grimace. “It involved tackling the inner and outer sills, rear inner and outer arches, front and rear valances, both front chassis legs, the bottoms of the doors and front wings, and the complete boot floor, which we ended up flat-flooring with a Land Rover panel to make room for the Mustang axle and twin-exit exhaust.” With all that taken care of, however, it was time to figure out how to get that meaty engine in there and make it run happily. “We originally thought about running it on its standard injection,” he continues, “but soon found out it was far too complicated for us with its fly-by-wire throttle body, multiple fuse boxes and CANBUS-controlled everything.” 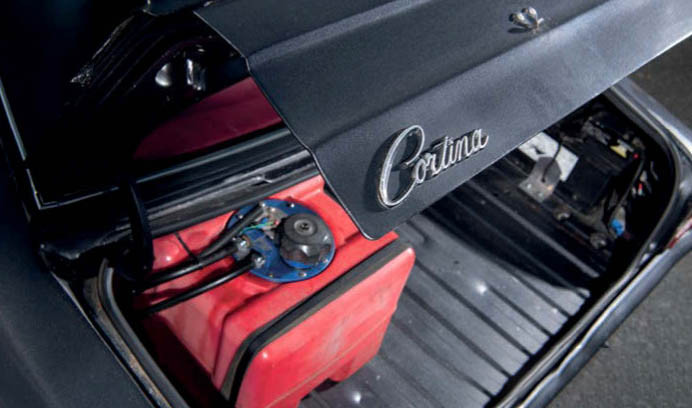 “Then we thought: if we’ve got to buy standalone management, we might as well do something crazy! So we used the bottom half of the standard manifold and modified the top half to suit the Eaton supercharger, milling out the top of the blower and welding on the carb flange — we capped off the original intake on the back of the ’charger. The first time the motor fi red up we were shocked at how well it started with our home-made set-up.”

There was a little fine-tuning required, as during mapping there was an issue with the fuel pump having too much pressure and flooding the carb, but Dale at Bailey Performance came up with a solution: he made a speed controller from scratch to reduce the voltage to the pump at lower rpm, using the Megasquirt to control it. Very clever stuff…

Fitting the Mustang rear axle took a little ingenuity, too. Matt had seen the conversion online and it looked pretty straightforward, although it would only fit with 6 inch-wide wheels and that simply wasn’t enough girth. So the fellas found themselves cutting all the brackets off and chopping 2 inches out of either end in order to fit 7.5 inch rims — a local machine shop were then roped in to re-spline the halfshafts. Well, it wouldn’t be any fun if it was easy, would it? And after all of this extensive custom work, the results really do speak for themselves: it’s a bit Savage, a bit Australian, a lot angry, and ready for everyday mischief.

“People love seeing the supercharger sticking out of the bonnet,” Matt smirks. And the best place to see it is from the driver’s seat, wingman by your side, heading for the horizon. A car built purely for pleasure, entirely by its own rules, swaggering with big cat energy.

Original axle and rear suspension have been swapped for a shorted Mustang axle and coil-overs. Boot floor needed swapping for a flat Land Rover panel to clear the new axle.

Bought on eBay after a late-night, beer-fuelled bid, the two-door Cortina wasn’t quite up to the standard Matt and his dad envisaged...

Keen to get stuck in anyway, the pair made a spit to mount the shell on and carry out the welding. One of the first jobs was to replace the original boot floor with a flat panel to clear the new axle.

The spit made the task of welding in repair sections and a new gearbox tunnel much easier.

Trial-fitting the new engine and gearbox showed that there was a decent amount of clearance in the engine bay.

Finally it was time to prep the shell for paint — and fit the oh-so-1970s ducktail spoiler.

The Cortina is huge fun to drive — as Matt readily demonstrates...

“THE FIRST TIME THE MOTOR FIRED UP, WE WERE SHOCKED AT HOW WELL IT STARTED WITH OUR HOME MADE SET UP”

Inspiration often strikes from unexpected directions, and when Matt and his dad were trying to figure out what to do about sourcing an interior for the Cortina, an unlikely candidate presented itself. “One day we were walking around a scrapyard looking for ideas, and we came across a Proton GEN-2,” says Matt. Now, this particular car may have a justified reputation for being generally terrible in pretty much every respect, but it does have one trump card to play: its seats. “We saw that it had some nice-looking tombstone-style seats, so we grabbed them — and ended up taking the rear bench as well,” he explains. And with the original doorcards, dash and steering wheel repainted and dyed to match, the guys created something unique.