Barking with a cacophony of VTEC-inspired revs and with a bite to match, Chris McNair’s stunning Mk1 is a martial artform.

Four-door sleeper that revs to 9000 rpm

In terms of unexpected things to find beneath a bonnet, Chris McNair’s Mk1 Escort is up there with the wolf in Little Red Riding Hood. Like the wolf, this four-door has grown teeth and devours all before it, but provides few visual clues as to the beast lurking beneath the surface. 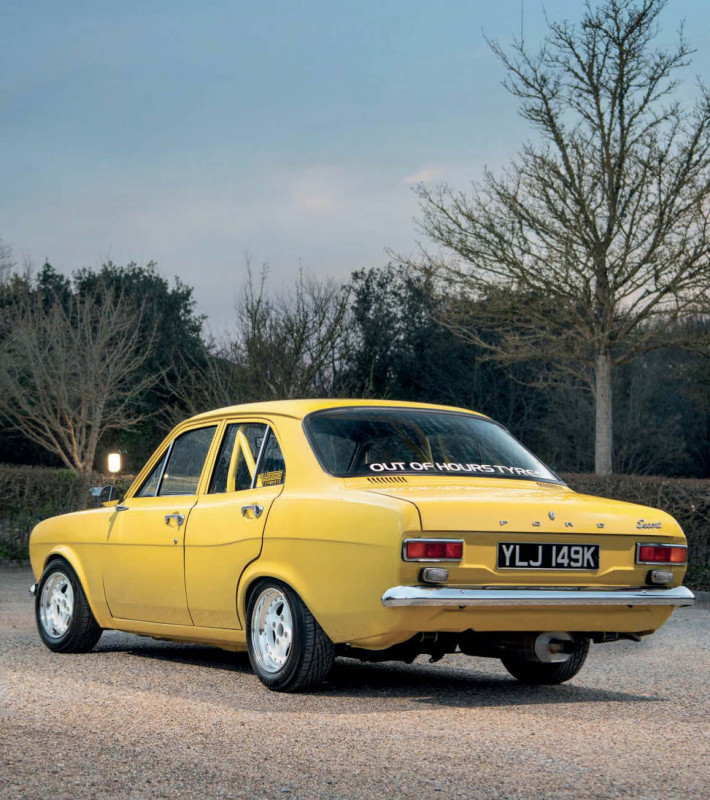 Subtlety is a key ingredient of this build — that, and a screaming four-pot that originated in the land of the rising sun.

A 9000 rpm redline and the thick end of 250 bhp from a naturally aspirated 2-litre is big money in tuning terms, and quite often comes with a compromise: daily useability. Having persevered with an all-steel 1.9-litre Crossflow and finally tiring of the tinkering and infinite adjustments needed to make it a reliable lump, Chris has shunned convention and opted for something a little different: a Honda F20C aka the one in the S2000.

“It was an absolute rust bucket that had sat for around two years in the front garden of a house two doors down from where I was working,” Chris tells us, recalling the first time he clapped eyes on the originally Tuscan Brown 1300, which was white when he saw it sitting. “I knocked on the door, made an offer and got it back home.” 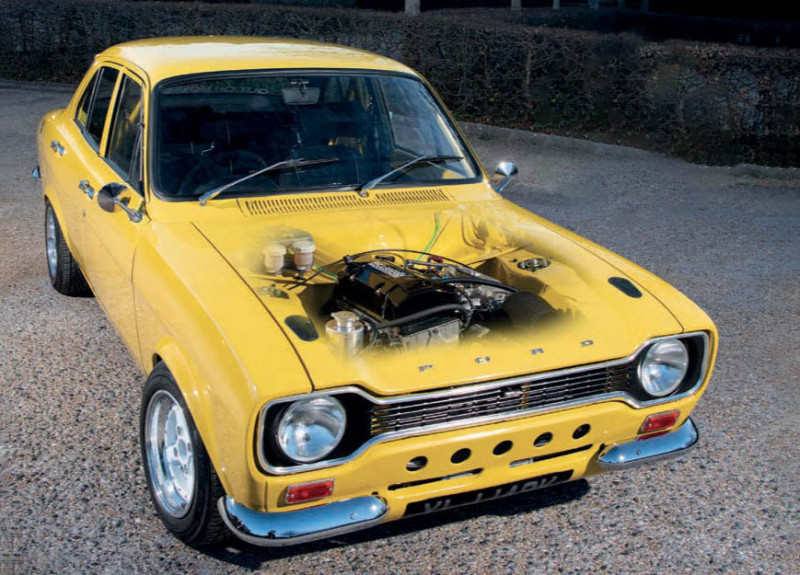 That was when the work really started. Fortunately for Chris, he has a great network of friends and family to call on who helped him through the build, completing the bulk of the work in the garage at home.

And the reason for wanting a Mk1? It’s a family thing. “I’m a Ford guy,” he smiles. “I’ve got the Escort, but I also have a Mk2 Fiesta as the next project. My dad raced Fords on the ovals back in the day, and my brother has a Mk2, a Mk1 Escort and a Mk2 Transit recovery truck. I’d originally bought the Fiesta, but then went out in my brother’s Escort and knew I had to have one. It was then that I found this.”

Back at his house, it was time to strip the Mk1 back and see what Chris had ended up with. A lot of rust, was the answer. “Everything from the firewall forwards is new — arches, inner arches, plus the floor, gearbox tunnel; the roof, doors and bootlid are about the only original bits left.” 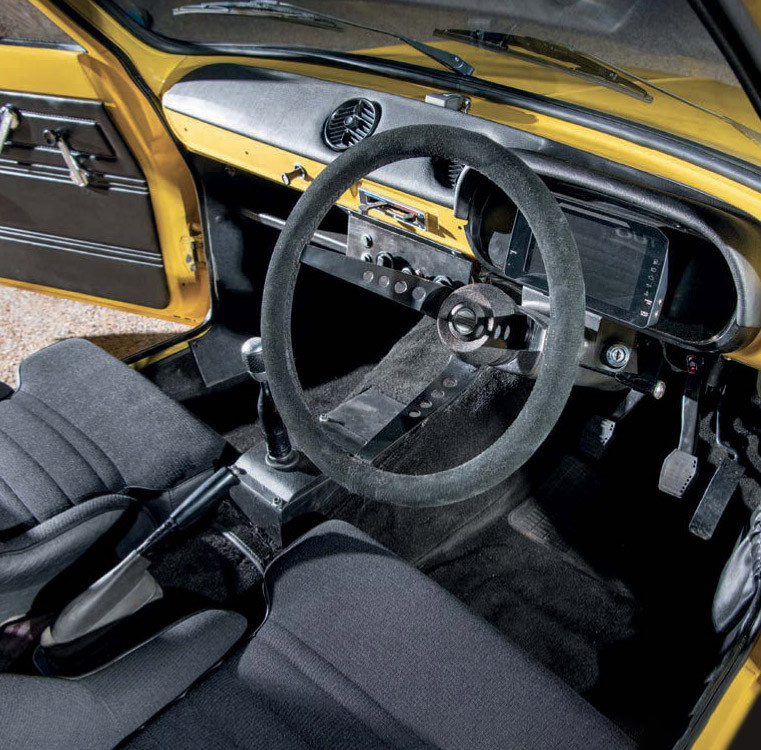 With the majority of the welding carried out by his brother, Terry, Chris had a clear vision of how he eventually wanted his Mk1 to end up: bright colour, south London look, Fast Road engine. A tried and tested formula. Working on a spit in the garage at home, it took almost two years to sort the body repairs out, with Chris spending many an hour searching for all the fiddly pieces of new trim required to ensure the build reached the standard he desired.

Chris enjoyed and upgraded the Mk1 for over two years before a bid to transform the handling resulted in a different direction for the car.

“I went to Hallscorts Performance to have the suspension upgraded as the anti-tramp bars just weren’t cutting it with the 1900 Crossflow,” he says, explaining that the engine’s requirement for more fettling left him facing a big decision. “I thought go on then, stick a Honda in it. 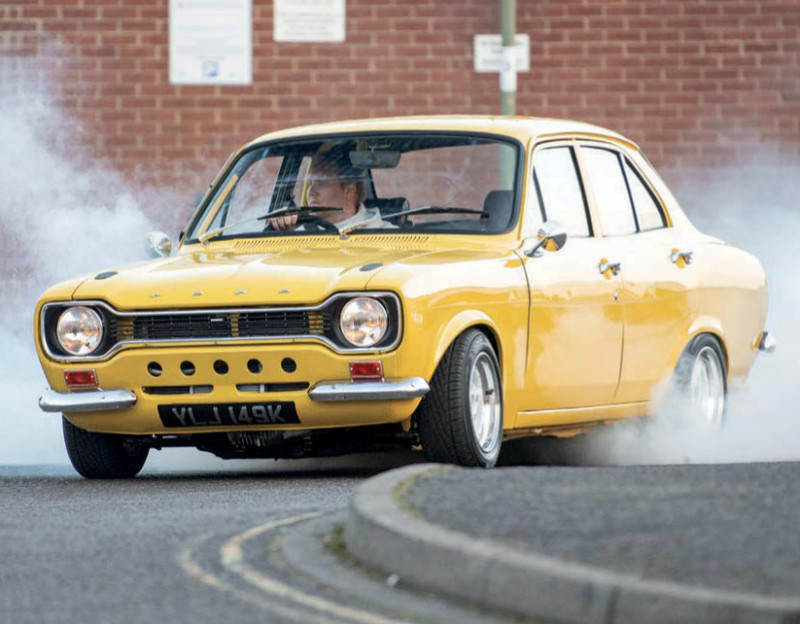 “I sent it with a six-dial dash and cable clutch, with a digi dash and bias pedal box in boxes,” he continues. “They fitted everything for me and delivered it back about six weeks later, and they also resprayed the bay while the engine was out. I just had to jump in and drive!”

By this point Chris had owned the Mk1 for over seven years and enjoyed the fruits of his labour for only around two, but the six-week turnkey turnaround from Hallscorts dispels the myth that modern engine conversions are drawn-out affairs. 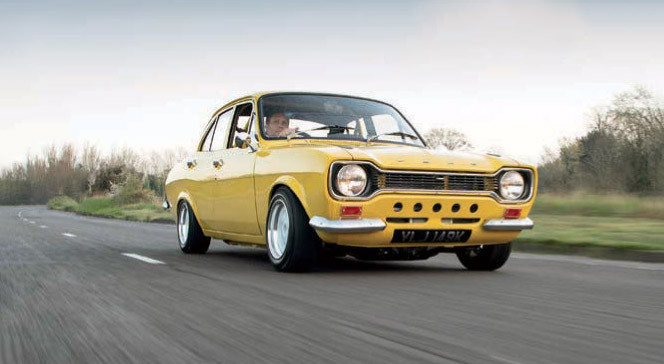 “I’d looked at the ST170 motor and Duratecs and people spend big money on them, but the F20C doesn’t need much to be putting out over 250 bhp,” he says. “This had a refresh before it went in and has cams, larger throttle body and a bit of headwork, and it just goes in any gear. I shot past an M-car at silly speeds recently — nobody expects it to go the way it does.”

Power is put to the rear wheels through an uprated English axle with 3J Driveline halfshafts and matching LSD with 3:54:1 ratio. Wilwood four-pots do their best to haul the Mk1 up, aided by grooved, drilled and vented discs with new drums and uprated shoes in the rear.

The added bonus of 250 naturally aspirated horsepower, fuel-injection controlled by a MaxiECU and reliability, is that nestled under an enlarged tunnel is the six-speed gearbox originally attached to the four-cylinder in the Honda S2000, complete with its famously slick shift. Chassis-mounted, the engine looks right at home, too. Especially breathing through a 4-into-1 manifold and stainless system.

It’s now running GAZ Golds at each corner and the suspension was refreshed, as planned, at Hallscorts, with compression struts, anti-roll bar and drop links Rose-jointed, with the rear end fitted with the company’s own suspension kit, which, as Chris tells us, “uses decambered springs and a system like a modified A-frame” to locate the axle.

The build isn’t finished, of course, as Chris intends to upgrade to a set of ITBs and have the axle narrowed by his friends at B&M Fabrication, who’ve helped a lot on the build, so that he can run wider, stickier rubber. However, in its current spec it’s just about the perfect, useable Mk1 Escort. For example, the interior has been slathered in Dynamat sound deadening, the carpets are new, a new loom has been fitted to ensure absolute reliability, the RS1600 Contours retrimmed, a Springalex wheel sprinkles an added dash of period correctness, while at the other end of the spectrum an AiM digital dash hints at what lies beneath the steel, Daytona Yellow bonnet.

It’s just as well it’s comfy, as Chris intends to make the most of its useability. “I’ve been to shows in it and use it on the road a lot,” he says. “I have a couple of Goodwood track days lined up, too. It’s comfy, but you put your foot down and it shifts. If I ever get chance to take her out I will, even if it’s pouring with rain. I love it in the rain — it teaches you to drive a car properly!”

And the hardest part of an ambitious, cross-generational engine swap build from a badly rusted base? “Getting the stance and wheels right took a while!” he laughs. “I tried all sorts — RS four-spokes, Lasers in a different colour — and then Si at Out Of Hours Tyres got the centres for these Image four-spokes. It took a lot of calls to get the right lips, then have them redrilled for valves, polished and back on the car a couple of days before the photoshoot.”

A true wolf in sheep’s clothing.

cage, tailpipe and split-rims don’t give the full game away.

Finding the right wheels was a trial, but Chris is happy with these split-rims.Battery and washer bottle now in boot for a cleaner bay. Dynamat used throughout to make the Mk1 more civilised.Fully-trimmed interior mixes classic with modern well.

The F20C is definitely flavour of the month right now and Hallscorts have become specialists in dropping them into Escorts like Chris’.

AiM digi dash sits in the Mk1 dash cowl and works perfectly with the MaxiECU.

The F20C has had cams and headwork. Induction package includes larger throttle body. 4-into-1 manifold has been designed for the Escort.

THE F20C A NATURAL HEARTBEAT

What is it? Only the five-time International Engine of the Year winner. Until Ferrari started churning out the 458 Italia in admittedly far fewer numbers, it also boasted the highest specific power output of any naturally aspirated volume production engine: 125 bhp per litre. Despite being a good 20 years old, even today not much has come close in terms of blending specific power and proven durability. With the rise in popularity of turbos, hybrids and advanced emission control, we can’t see much else emerging to rival the F20C for out-of-the-box high-revving thrills. Of course, that’s not to say you cannot also throw a turbo in the mix… For such revelry, Hallscorts Performance are the guys to speak to.