Only a handful of endurance racing cars are strong enough to finish their debut race and fewer still finish on the podium. But that’s what the XJR-5 achieved at the Road America round of the 1982 IMSA GT Championship. Earlier that year and following the previous successes of Bob Tullius’ Group 44 outfit in the SCCA Production Car Championship with the E-type Series 3 followed by Trans Am with the XJ-S, it was announced that the Virginia-based team would enter the IMSA GT Championship’s new GTP Class for sports prototypes using a mid-engined car powered by Jaguar’s 5.3-litre V12.

With Jaguar’s new chairman, (Sir) John Egan, understanding the marketing benefits of motorsport, the programme had the full support of the company. His one stipulation, though, was that the car had to meet Europe’s almost identical Group C regulations so it could eventually race at LeMans. 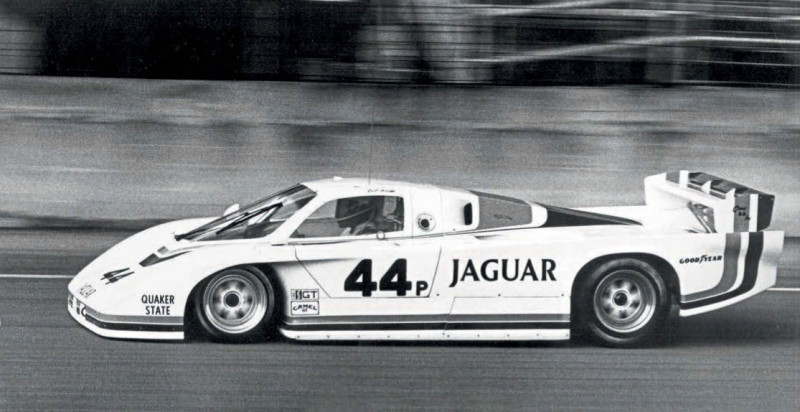 “Winning this race was very important to rebuilding Jaguar’s mystique,” admits Egan in his 2015 autobiography, Saving Jaguar. “The IMSA long-distance races provide a spectacular showcase for a manufacturer to show the durability of its products,” said Mike Dale, vice-president of Jaguar Rover Triumph Inc, during a press conference in January 1982. “That is why we have chosen to build a GTP car that can use Jaguar’s basic engine line so that we can relate our, anticipated, success to the products we sell.” The design was the responsibility of aerodynamics expert, Lee Dykstra, who for two decades had been designing and building competition cars for Ford, General Motors and many others.

Although the original plan had been to debut the car at Sebring in March, with the newly christened XJR-5 being an all-new machine, this was an unrealistic goal. “For the first time we had to build a race car from scratch, and we didn’t know the relationship of one piece to another,” said Tullius years later.

After testing throughout June and July, the car was finally ready for the 14th round of the IMSA GT series held at Road America in Wisconsin on 22 August.

Driven by Tullius himself plus Bill Adam, a Scottish-born Canadian, the white and green car qualified strongly in seventh. Tullius soon moved into fifth at the start of the 500-mile race before handing over to Adam on the 28th lap who reached fourth. Third was then assured when the engine of the Lola T600-Chevrolet of Ted Field and Danny Ongais blew up close to the end. Since the Porsche 935 turbos that finished first and second were in the GTO Class, this also meant Jaguar took home GTP honours.

‘’We were extremely pleased with the car’s performance,’’ said Mike Dale afterwards. ‘’You don’t catch 25 years of Porsche development overnight.”

For Tullius, it was the realisation of a long-held ambition to build and compete a purpose-built racing car. ‘’All of the cars I’ve driven in the past were compromises – modified street cars,’’ he said following Road Atlanta. ‘’I think that my natural talent is to be a race driver, and a natural-born race driver needs a natural-born race car.’’

With the V12-engined XJR-5 running strongly and reliably, it was a positive start, especially in front of several Jaguar executives including Egan. Due to accidents and technical problems, the rest of the 1982 season yielded few results, but four victories the following year more than fulfilled the XJR-5’s early promise.

This competitiveness encouraged Jaguar to head back to LeMans in 1984, the first time since 1956 that the company had been on the entry list. Although neither of the two cars that entered finished (and the best result the following year was 13th), the positive reception the XJR-5 received persuaded Egan to enter Jaguar into the World Sportscar Championship from 1985. But since he thought the British team had better resources than Group 44 to win LeMans, he handed responsibility to TWR. He was proved right three years later.

But none of it would have been possible, though, if it wasn’t for the XJR-5 coming third at Road Atlanta forty years ago.

Article type:
Review
jaguar xjr-51982jaguar
—
133
Write a comment
No comments yet. Be the first to add a comment!