When Jerry Blackett bought his 2007 XK 4.2 he didn’t like the paintwork or its styling until a pair of trousers and Grantley Design influenced him to make some changes.

This 2007 XKR convertible has been given a radical new look by North Yorkshire-based specialist, Grantley Design, that closely resembles an F-TYPE. We talk to the owner to find out why he chose it plus the work that’s involved 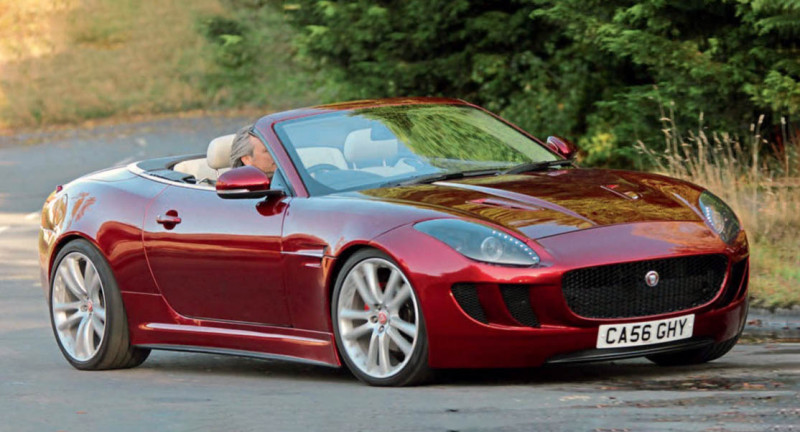 Jerry Blackett admits he’s not a diehard Jaguar fanatic and has more admiration for a beautiful design than a brand, so it’s perhaps fortunate that he now owns the 2007 XK 4.2 (known internally as the X150) seen here that has been extensively-modified in its appearance. It could have all ended up completely differently had he not had to replace a Mercedes SLK that was deemed too uneconomical to repair back in 2011.

As CEO of the Greater Birmingham Chambers of Commerce at the time, it gave him the opportunity to buy a Midlands-based brand. The four-year-old XK, painted in factory Midnight Black, caught his eye and was seemingly a step up in sports car terms from the Merc.

“Immediately, I realised what a full-fat sports car was like,” he remarks. “My SLK, with a 2.3-litre supercharged engine, felt enough at the time. I’d enjoyed the design of the folding tin roof but felt the design of the car fell short of being beautiful. The XK with its more powerful engine, much tighter steering and great-looking lines was a revelation. Wow! I loved it.” 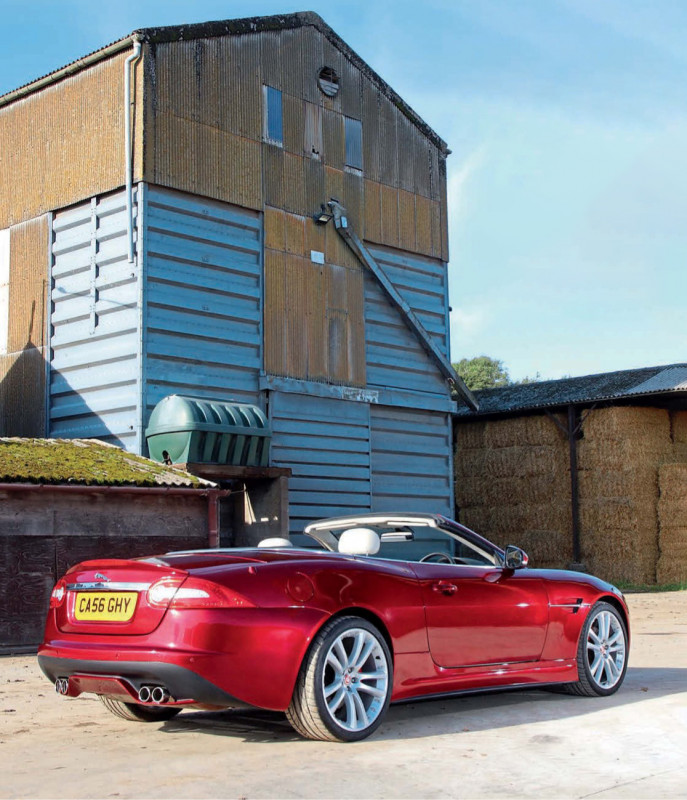 Ten years into owning the XK, Jerry was ready for a change of car, but it was during the Covid-19 pandemic and one of the lockdowns, so his choice was restricted. “I came close to trading the car in for a £46,000 red convertible XK Dynamic-R,” he recalls, “until my wife, who manages the books, enquired just what it was I had in mind for paying the bills! Further denting the business case, a friend who is an instructor with the Institute of Advanced Motorists (IAM) had also pointed out with icy confidence that I’d kill myself with 550bhp to control.”

With plans to replace the 2007 XK being put on hold, Jerry surfed the internet for some inspiration and came across Grantley Design, who make and fit a selection of bodykit and styling options for both the X100- and X150-generation of XK models.

In some cases, this helps an X150 XK for instance, to resemble a later F-TYPE, but it also creates a more personal approach to styling and customising. Jerry was warned by a friend of his to not ruin the originality of his XK, but surely this is one of the positive aspects of Jaguar that have existed for several decades whereby independent designers have used these cars as the basis of their own projects. After all, few people find a Broadspeed XJC or a Coombs Mk 2 an eyesore.

The man behind Grantley Design is Dave Kennedy (his middle name is Grantley). Based In Wetherby, North Yorkshire, Dave operates from a workshop where he 3-D scans a vehicle, then produces a bodykit to suit using computer-aided design (CAD) software, before creating a prototype from model board using a CNC machine. The prototype panels are then fitted onto a vehicle and modified to suit before moulds are taken and the real panels are created from glass-fibre or injection moulded polyurethane.

On the X150 XK, the new panels include front and rear bumpers, front wings, sideskirts and a bonnet, mainly constructed from glass-fibre, but as Dave explains, “The bottom 130mm of the front bumper is made from polyurethane — a very tough polyurethane that can withstand bumps and scrapes. This is injected into the mould once the glass-fibre bit is made to fuse the two materials together.”

Those front-end modifications in particular make a noticeable difference to the appearance of the X150 XK. Plus, the larger honeycomb grille with more prominent shark gill-style vents to each side produce a more defined look. Dave explains that due to the different angle of the front bumper, “My bumper slopes back towards the bottom as the original splitter is level with the top front, so an original front bumper would hit a kerb before mine would hit it.”

The new front bumper is complemented by Dave’s own design of LED headlights which in this case, incorporate Hella HID projector units. The headlight casings are manufactured from injection moulded polyurethane and the lenses are made from vacuum-formed polycarbonate.

The bonnet is even more complicated than the front bumper. The original aluminium bonnet is replaced with a glassfibre item that’s a little larger, because it extends into the front wings, so the standard aluminium front wings are altered. Dave wanted to reflect the design of the E-type’s bonnet, although he probably realised it was impossible to create a full flip-fronted front end, so settled for the subtle but sophisticated changes he has made.

“The old front wings are removed completely,” he explains. “A new lower section of wing is fitted and the top is now part of the bonnet. The wings and sideskirts now flair out like the rear of the car, giving it a sexy-looking waist.”

The new sideskirts are constructed from glass-fibre and incorporate a black-coloured narrow running board or lip. It’s a subtle alteration, but sufficient to make a difference. Dave has his reasons for why he wanted to alter the appearance of the XK, especially at the front. “What I didn’t like about the whole standard front end was that it was Ford Mondeo-like with its sharp pointy headlights, flat bonnet and straight sideskirts to the front,” he says. “It was missing the muscular raised wing tops of the previous Jaguar designs.”

There are several late-model updates that help to alter the look of this XK, such as the later door mirrors with their LED indicators and also the later LED rear lights. With this XK being naturally aspirated, some of the features from the supercharged XKR have been incorporated, including bonnet vents and quad tailpipes. Those tailpipes should be a pair of singles, but Dave cut them off and welded twin pipes in their place to re-create the XKR image. There’s also a new bumper at the back with cutouts for the quad tailpipes, which borrows some of its lines from an original bumper, especially the black underbelly and its ledge.

“Taking the ledge that originally wrapped around the tailgate bottom, I lowered and stretched it to the extreme edges of the rear bumper,” says Dave. “This gives the illusion of the car being wider and lower. When viewed from the side, you’ll see the arches wrap around the wheels, adding to the exoticness of the styling.”

Jerry’s XK retains a standard set of 20in ten-spoke alloy wheels, but they sit on 20mm spacers between them and the wheel hubs to help increase the track. Such an increase in width hasn’t resulted in the tyres fouling the wheelarches.

The choice of exterior colour for Jerry’s XK was perhaps one of the biggest challenges. He began by asking whether Dave could respray his car in a colour to match his corduroy trousers. This was during the first meeting to discuss the modifications, so Dave photographed Jerry’s legs (with his trousers on of course) as a reference point. Jerry also went away and researched some paint colours and discovered that House of Kolor’s Kandy Apple Red (all spelt with a K instead of a C) was a popular choice. This is a pearlescent flip colour, so it changes under sunlight or bright artificial light, and always produces a deep red effect. It has long been popular within the custom car scene, but requires all the panels to be painted at the same time to avoid inconsistencies.

The respray involved applying two coats of sealer, followed by three coats of House of Kolor Silver, then four coats of Kandy Apple Red and finally three coats of lacquer. And it was later finished off with a ceramic coat that negates the need to polish and wax the bodywork and protects it for a guaranteed five years from oxidisation and fading. It’s the equivalent of a long-lasting polish, but costs around £500 or more to be applied. It still means the bodywork needs to be washed to keep it clean, but the protective layer is similar to having an additional clear coat.

“There was a lot of prep work,” warns Dave concerning the respray. “Parts that would usually be painted off the car, had to be loosely mounted to the car. The biggest problem is that it’s impossible to retouch any parts as adding extra translucent red creates a darker red. The red needs the silver underneath, so the whole panel needs to be repainted if there are any defects.”

The final bill for all of the work completed on Jerry's XK came to £14,000, which as he admits, is more than his car is worth, but from another point of view, a lot cheaper than the XK Dynamic-R he nearly bought. Dave points out that the cost was high due to the paint that was more expensive, plus additional parts including the LED rear lights, the modified exhaust tailpipes, the HID conversion for the front headlights, the ceramic protection for the paintwork and the later door mirrors with their LED indicators. A bodykit conversion on an X150 XK starts at £9,995, which includes the full bodykit fitted, an active rear spoiler that's not fitted to Jerry's XK and a full respray, although the price can be reduced by a further £200 if that respray is in the car's original colour because the insides of the doors and boot wouldn't need painting along with the front suspension turrets.

To anyone who has extensively customised or modified a vehicle, £14,000 is quite a reasonable sum of money and can easily be soaked up with an engine build. The resulting Jaguar is undoubtedly different from a standard XK, but isn't too radical to be mistaken for a standard production sports car. Only the Jaguar badges give the game away, but from various angles, there are hints of Marcos, Aston Martin and Maserati. Of course, the bottom line is whether Jerry likes it «Maybe it was lockdown, but I'd become tired of a black car,» he says. «I wasn't excited anymore by all the lines of the XK, but still loved its performance. Now, I smile every time I look at the Grantley interpretation. The front in particular is so much more purposeful. It is also the paint that makes this car so special. In certain lights, it's akin to a glass of fine red wine — the perfect pick-me-up as we emerge from the pandemic.»

ABOVE: 20mmspacers sit behind the 20in 10-spoke standard alloy wheels

LEFT: Jerry Blackett in the trousers that influenced the colour

LEFT TO RIGHT: Jerry’s XKoriginally hadMidnight Black paintwork when he bought it in 2011.

The bumpers, front wings, bonnet and sill covers were all removed for the Grantley Design conversion