Reader’s restoration: This rare 1991 Ford Sierra Ghia 4x4 estate was saved by a father and son team who went through some bad luck and great luck in the process… 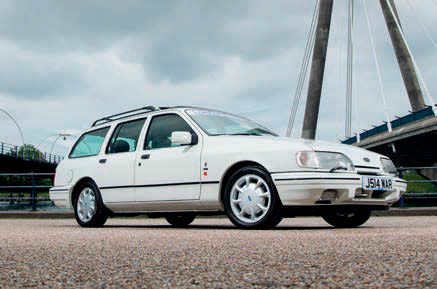 Not so long ago a 2.0-litre Sierra estate was a common enough sight, but even then the 4x4 version was unusual. In the past decade or so the 4x4 variants have become downright rare. Reg Harwood has owned a few classic Fords over the years including a Capri, Granada, XR2 and XR4i then a Sierra estate with a 2-litre Pinto. “I liked that Sierra,” remembers Reg, “it was a silver Ghia and when I saw this white Sierra Ghia 4x4 for sale in 2006 I had to bid on it.” The Sierra was his for £450 and in January 2006, Reg and his son Paul drove to Guildford from their Liverpool home to pick up the car. “It was in decent condition,” continues Reg, “it drove back fi ne and had clearly been looked after. Going by the paperwork and the stack of old MoTs, whenever it had needed something the work was done. I drove it every day for three years, then stopped using the car around 2009 and then it sat on the driveway.”

It was 2017 when Reg decided to resurrect the Sierra, selling his Mondeo Ghia to finance the work. “The tinworm had set in and the Sierra needed a lot of welding. It received new inner and outer sills, rear arches, chassis legs, a new floor and strut tops, all sourced from Sierras R Us. They were all fitted by our friend Damo and he did an excellent job in a very short amount of time, working on it constantly.”

The next step was to get the Sierra painted and that’s where progress ground to a halt. “We’d found a painter who agreed to do the work but the car just sat for two years and he didn’t touch it except to add more damage,” remembers Reg. “Finally we found another painter who reassured us he’d do a perfect job so the car then went to him. Five days later he phoned it say it was done. It was an utter mess. He’d ignored our instructions and used the wrong shade of white from what we’d agreed, painted straight over clips that should have been removed and if there was a wire in his way he had cut it off. He wrecked the wiring loom. At that point I’ll admit I completely lost heart in restoring the car.”

The Sierra was kindly recovered away from there by Peter Keiser and now Reg wondered what to do next. At that point his old work colleague Dave Kirby saw Reg and Paul’s posts on social media. “Dave came to the rescue and took on the Sierra, sorting all the previous painter’s damage then repainting it inside and out and. He added new front and rear windscreens, repaired the damaged wiring, refurbished the wheels and loads of other little jobs we hadn’t expected him to tackle. He really went above and beyond what we’d ever hoped for.”

Which now saw Reg and Paul with a lovely rolling shell, beautifully painted, the panels all perfected gapped and hung, but nowhere one headlight fell off when the car was being transported and all bulbs and switches were replaced just for peace of mind.

A steering column bush also needed replacing once the Sierra was back on the road, but other than that it’s been perfectly reliable. The sunstrip on the windscreen is a nod to Reg and Paul’s love of rallying. The Sierra passed its MoT in August 2021.

“It drives really nicely, it feels tight on the road,” says Reg. “Going by the MoT history that 91,000 miles is genuine, I believe it was a company car then was sold through the auctions. One of the next three owners was a vet judging by the amount of dog and cat fur we found in the carpets…”

How does it compare to that previous silver Sierra? “It’s a thousand times better,” laughs Reg, “being a 4x4 it’s responsive and as a Ghia it’s luxurious. It’s great. But I couldn’t have done it without Paul’s help and knowledge.

Thanks to: Damo for the welding (the car wouldn’t have made it back on the road without him), Dave Kirby for bodywork and paint and Peter Keiser for transporting the car.

One of the best forms of advertising for car capability came from rallying. Audi and Peugeot were fielding successful four-wheel drive cars so Ford needed to come up with something equally competitive. For 1985 that car was their Sierra XR4x4. Employing a pair of viscous coupling limited slip differentials that supplied 67 per cent power to the rear and drawing on experience from Ferguson FF Developments the new 4x4 system found its way into the Sierra and Escort RS Cosworths. The XR4x4 five-door Sierra immediately replaced the existing XR4i model. Ford then announced a 4x4 estate version of the Sierra for 1986, available with the two-litre DOHC and L-Jetronic fuel injection it had similar running gear to the XR4x4 model but was instead built and badged as a luxury Ghia.

“BEING A 4X4 IT’S RESPONSIVE, AND AS A GHIA IT’S LUXURIOUS”

The Estate had been parked up for a number of years and it was just crying out to be saved.

Hand pumps add extra support to the seat bolsters. The level of finish goes beyond what you might expect for a rebuild on an early 1990s Sierra, but this is a rare car now. Sunstrip is a nod to the Harwood’s love of rallying.

Friend, Damo steamed into the welding work before it was packed off to be painted. It took three attempts to get the car in paint, but finally the Sierra’s rebirth had turned a corner. Fitting the car back up was the find part, with Reg and Paul refurbing or replacing parts if needed. Engine bay is immaculate. 2-litre twin-cam now runs as good as gold.