It was to be America’s first supercar. Ford had been designing vehicles based on its ‘Aero’ language since the 1980s: when the original Taurus saved the company from the increasingly confident – and better built – competition. By the mid-1990s, Aero was standard operating procedure at the Ford design department – if it “ain’t broke” …

The design team were readying the proposals for senior management at Dearborn. James Hope, a young Designer who had started at the Detroit Car Maker less than two years earlier, did not expect his model would make the cut. See, Hope had missed the Aero memo. Or, more so, ignored it. 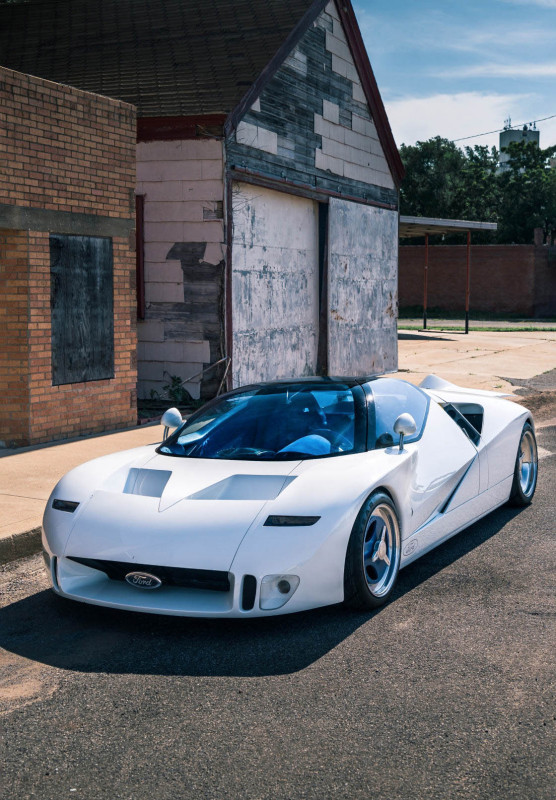 Instead, the young Designer was inspired by sharper designs – such as the F-117 stealth fighter: A radar-defying US-military secret until 1988, that saw acute angles and hard edges prioritized to fly undetected into enemy skies.

WAS IT POLARIZING? “ABSOLUTELY! AND INTERNALLY IN THE COMPANY, AS WELL. A LOT OF PEOPLE WERE REALLY AGAINST IT … I HAD SOME PEOPLE, FRIENDS OF MINE, TELL ME HOW UGLY THAT CAR WAS, AT THE TIME, IN VERY BLUNT TERMS.

Working in Ford’s Advanced Design center, Hope took the word “advanced” literally: producing stark, hard-edge renderings which jarred with the familiar Aero approach. Years later, Hope said: “I was told that, early on, if I was going to follow this angular-design direction, was I really working for the right company?” 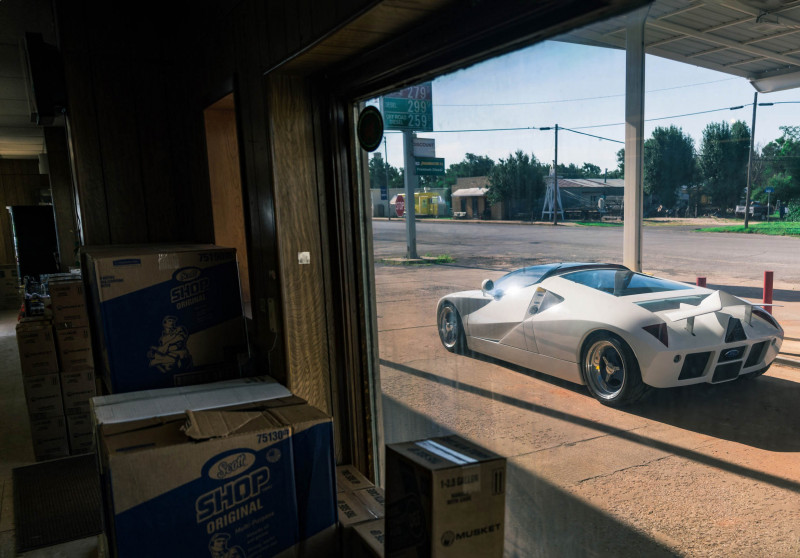 Hope’s GT90 proposal did not make the cut. It was not put up for consideration… ditched in favor of – you guessed it – more predictable Aero-style designs.

Hope said: “Top leadership came in for a review. And they were like, ‘No, we don’t want to see this anymore. You’ve been doing the same thing for 15 years, let’s do something new’.”

The design team needed something – fast. That “something new” was Hope’s straight-edge, angular design which was now thrust into contention. Instead of soft edges, Hope’s GT90 was a showcase for set squares over French curves: a triangle-dominant groundhugging supercar with a droopy nose, slim horizontal headlights, and a nod to the GT40 in two large hood openings – split by that recurring triangle theme. It won out – Aero was bunk!

Brent Hajek – who, decades on, owns the one-and-only 1995 GT90 Concept which he keeps at the Hajek Motorsport Museum in Oklahoma, United States – said: “When those guys designed and sketched this thing, they just nailed it! They didn’t go too much on the retro thing and they didn’t go overboard on the futuristic things. That’s what makes this car quite possibly the most valuable Ford that was ever built.” 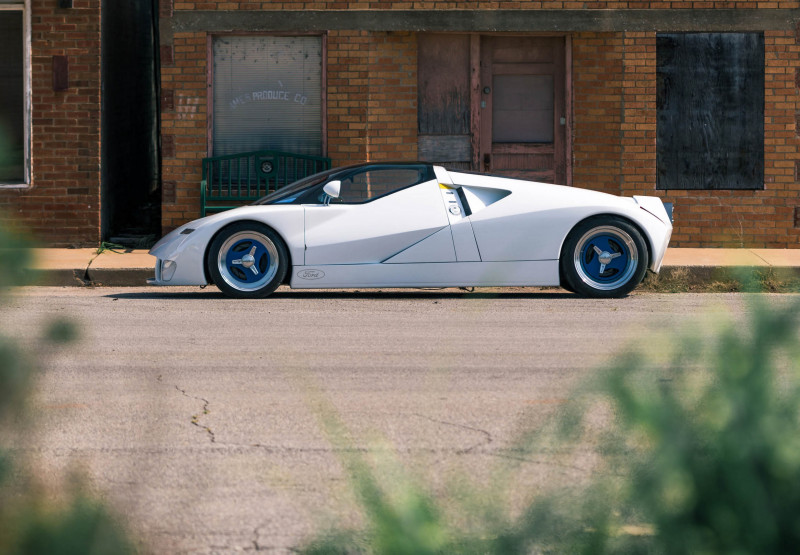 Hajek, who calls Edsel Ford a close friend, acquired the GT90 from the Car Maker – following Ford’s 100th anniversary, back in 2003. He was drawn to the fact that it stood out markedly from everything else that he had seen. He is not wrong. The side of the car alone is enough to frighten a Production-Line Manager: deep carbon-fiber panels with a sharp, angular beltline rebelliously rising from the bottom of the front wheel and rising remarkably beyond the rear wheel. The front arch itself literally goes off on a tangent – like many a corporate meeting – while that waistline is criss-crossed with another “cut” in the opposite direction, the tinted glasshouse “f loating” atop the crisp-white panel work. At the rear, the triangle-shape taillights and playfulness are clear: a large triangle hosts four smaller triangles – one for each exhaust outlet. To pop open the doors and clamber into the 45-inch-high GT90, there is a yellow … yes, you guessed it, triangle! The doors themselves integrate into a triangle-theme roof: forming a canopy-style cockpit which is drenched in bright-blue trim and triangles with chrome detailing. It is melodramatic at any angle. 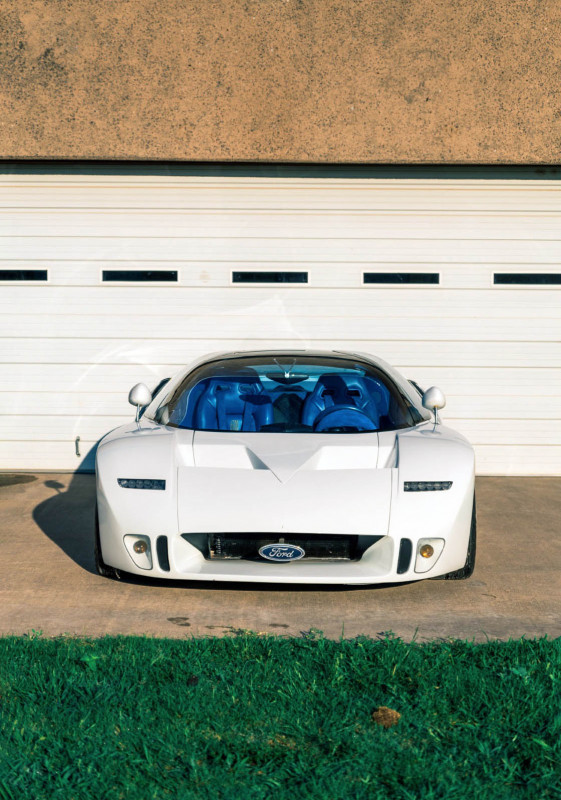 While there are curves over the wheels, the only completed soft edges are on the Ford badges themselves. Without them, who would think this was car from Detroit in the mid 1990s? Hajek said: “People look at it and they think it’s obviously some contemporary car from overseas. No, this is a Ford, a damn near-30-year-old Ford folks – that’s nuts!”. Back then, it made contemporary rivals look decidedly oldfashion: the Bugatti EB110 looks almost agricultural; the Lamborghini Diablo cool, but conservative; even the smooth-edge Ferrari F50 looks instantly dated next to the futuristic Ford.

The GT90 Concept – a successor and celebration of the original GT40 – was the first step for “New Edge”. Hope said: “It was shocking and offensive to some people at Ford.” Was it polarizing? “Absolutely! and internally in the company, as well. A lot of people were really against it … I had some people, friends of mine, tell me how ugly that car was, at the time, in very blunt terms.” 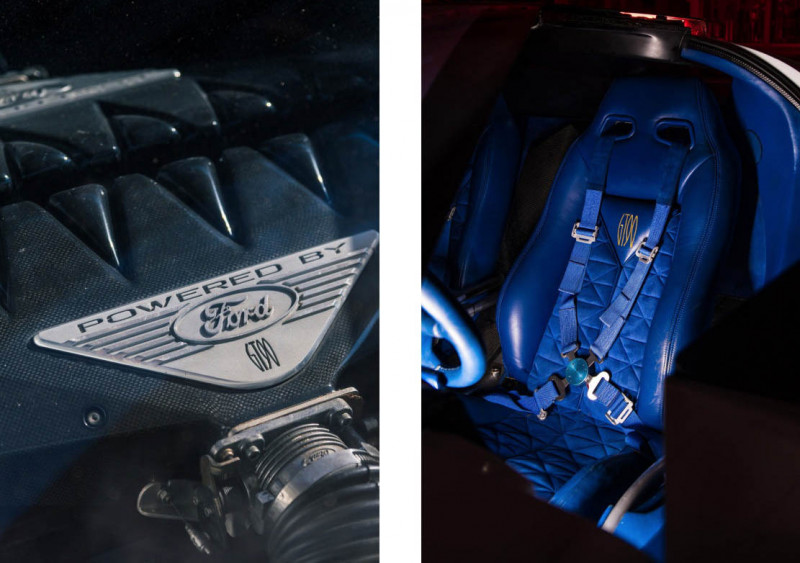 Under that controversial skin was a Jaguar XJ220 aluminum chassis. At the time, Ford owned Jaguar: Its Premier Auto Group including Jaguar, Aston Martin, Jaguar- Land Rover and Volvo. The XJ220 – so named for its target 220-miles-per-hour top speed: knocking off the Ferrari F40 and Bugatti EB110 as the world’s fastest car. Though, the GT90 was made to take the title back from the McLaren F1 (231 miles per hour), with a claimed top-speed of 253 miles per hour, the very speed that the Bugatti Veyron would reach a decade later as the world’s fastest production car. The GT90 was staggeringly ambitious inside and out.

Return on investment at such high speed diminishes greatly: so, for the GT90 to reach such dizzying heights, the XJ220’s 3.5-liter twin-turbo V6 was ditched for a fresh Roush engine. Roush, legendary in Ford motorsport circles for its NASCAR powertrains for many decades, fabricated the GT90’s mid-mounted engine using two modular 4.6-liter V8s from the Lincoln Town Car – each with a pair of cylinders removed and de-stroked from 3.5 inches to three inches to create a single 5.9-liter 90-degree V12… and that was not enough: a quartet – yes, four Garrett T02 turbochargers – was fitted for a 720 horsepower and 660lbs-ft of torque output running up to eight psi of boost, that could easily reach 900 horsepower if the boost was increased. The punch was fed through the XJ220’s FFD-Ricardo five-speed manual to the rear wheels.

Hajek said: “This is the fastest baddest Ford GT which was ever built. If you look at it, the GT40s, what they had done, I mean, they had the 427s in them – they were badass, don’t get me wrong – but they didn’t have four turbochargers and 12 cylinders! If you look at the new GT today, it’s half what this one is – it only had two turbos!” The stories surrounding the GT90 from media – who drove it with the wastegates intentionally jammed open to somewhat lessen its ferocity – vary. Most famously, Jeremy Clarkson raved about the road-going stealth while driving it appropriately around La Sarthe at Le Mans, saying, “This could be the cleverest most-exciting car ever … America’s first supercar, and they’ve nailed it!”. 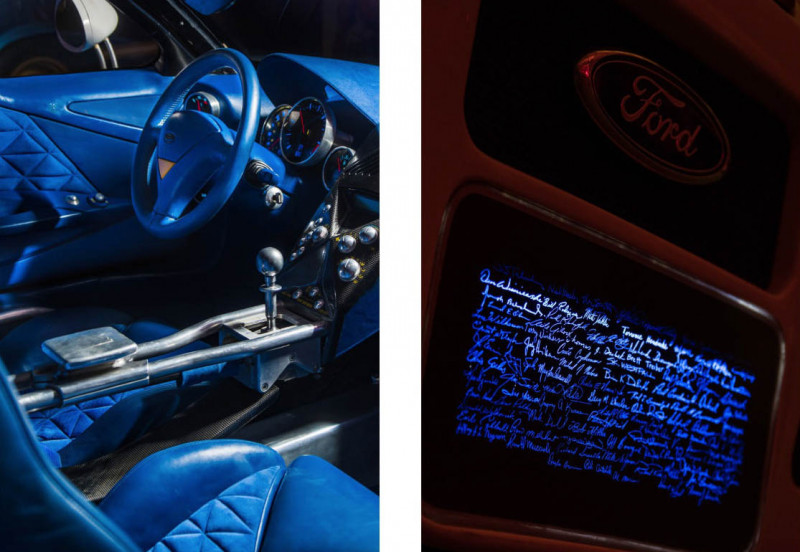 Hajek is one of the few mortals beyond that select media group to have actually driven it; and as part of an even smaller number in its ultimate guise with fully-functioning wastegates. “I’ll tell you what, when it starts spooling up, hang on! Man, that thing … there’s a lot of stories about it saying it wasn’t that badass, but it is! I’ve got seven-second drag cars, and we’ve set Land Speed Records, we know what’s badass – and that thing’s badass!”

On the Detroit stand in January, 1995 – where it was lucky to be after being damaged in shipping only days before; then, failed to start up when it was supposed to be driven onto the stand during its reveal – Ford was vague on whether the GT90 would go into production. Still, it suggested an estimated $150,000 price – the price you’ll see it on Gran Turismo II and Need4Speed II: The GT90’s polarizing looks saw it become a gaming legend and 1990s pin-up.

For Ford, it would be a huge risk to apply such a dramatically-different look to critical volume products – such as the Focus – yet the GT90 paved the way for its New Edge design and successful brand reinvention. Hope said: “The GT90 started out, and always remained, basically, a study. One of the main reasons was to test a new design language. You test the market reaction and you get people used to it – the shock or new direction change starts to get adapted and accepted.”

No one at Ford ever asked James Hope if he was working in the right place again. From his controversial sketches, the GT90 set the design direction of one of the world’s largest car companies for the 15 years. From a single concept – the GT90 – to millions of sales, New Edge had arrived in showrooms and driveways across the world. Sadly, the GT90 itself did not.