The mouthwatering technical details of the production-ready Mercedes-AMG One have been released. Just how close is it to Hamilton’s ride?

AMG ONE HYPERCAR WITH F1 TECH

The phrase “F1 car for the road” has been overused through the years and often refers to a stripped-back and spindly looking vehicle that is palpably barely road-legal. Mercedes-AMG went a different route for the One, adopting a hypercar appearance, while asking its development team and engineers “how much of our F1 car can we bring to the road?” Five years after the car was first unveiled, we now have the definitive answer to that question, and it’s an astounding creation. 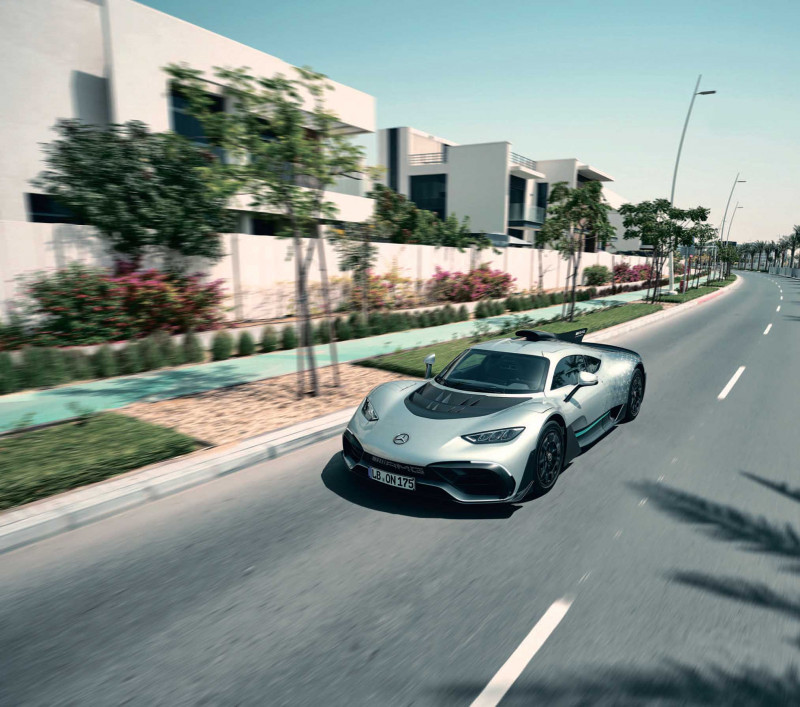 Central to the One’s link with Formula 1 is its engine. Or rather, its hybrid powertrain, as the 1.6-litre V6 is only one part of the equation and responsible for only just over half of the maximum power output. AMG quotes a peak of 1,048bhp when the engine and all four (yes, four) electric motors are working together flat out. And it won’t quote a maximum torque figure, as it’s apparently too complicated.

The body and monocoque chassis are made from carbon fibre

That engine started life in the back of the 2016 Mercedes F1 W07 Hybrid racer, one of the most successful Formula 1 cars ever. Its stats include 19 wins from 21 races at the hands of Lewis Hamilton and Nico Rosberg, so to say the engine has heritage is an understatement. But surely the new One’s powertrain isn’t actually very similar and the link is a marketing one?

It would seem not. The F1 hybrid system was developed by Mercedes-AMG High Performance Powertrains in Northamptonshire and a separate group was established to redevelop the engine for road car use. The intention from the start was to bring as much of the racer’s engine to production as possible. Emissions and sound regulations were some of the biggest challenges the team faced, not to mention building in a little more longevity. And, though the road car is hardly inexpensive, there were elements of the racer’s engine that were deemed prohibitively costly. 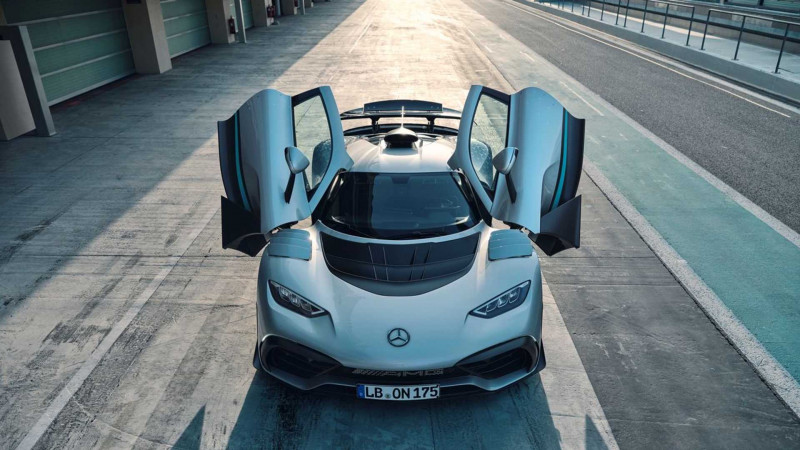 One such example is the sophisticated, finger follower valve gear. In fact, in the process of redesigning and simplifying this system, the AMG One team came up with a lighter design that was then adopted by the race team.

The F1 car’s 15,000rpm limit was never going to make it through to a road car, sadly. We’re told that it’s actually rarely used by the drivers as the engine’s output tails off above about 12,000rpm anyway, but it’s there to allow an over-rev margin. The road car’s engine still manages 11,000rpm, despite using commercially available fuel, while keeping within emissions and noise limits.

To that end, the AMG One features four preheated metal catalytic converters, two ceramic catalytic converters and two petrol particulate filters, along with a titanium silencer. Despite all that, early tests revealed that the car was way too loud for the public road. A good deal of the noise came from the spur gears that drive the four camshafts from the crankshaft, so the geartrain was redeveloped, and much work was carried out on an acoustic enclosure for the engine, too.

A mountain to climb

A little-known factoid is that Formula 1 engines use lead in their big-end bearings, but it’s a toxic material that is banned from road car use, so the Mercedes engineers had to rethink this part of the engine for the One. Another potential challenge arose when it came to the possibility of high revs with low load. In other words, someone revving the engine high when the gearbox was in neutral. In F1, the drivers are coached not to do this, as it quickly leads to connecting rod failure. The sport’s rules on giving the driver as much control as possible means it’s not allowed to use the engine management software to prevent such a situation, but that was easy to overcome for the AMG One, as there are no such roadblocks. 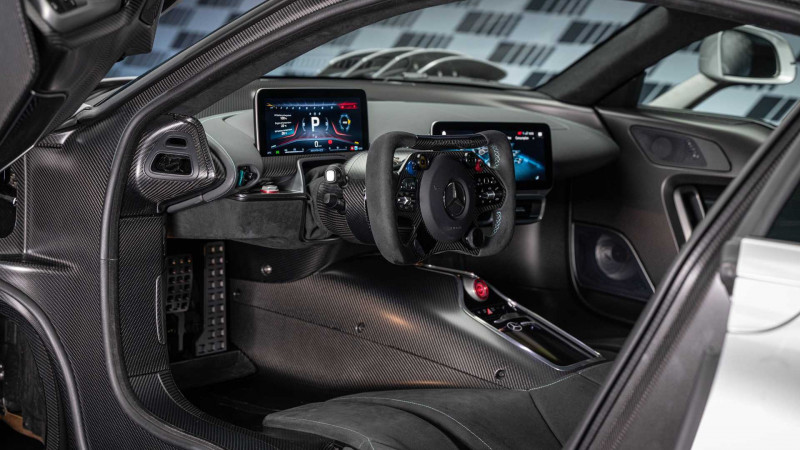 One of the few other changes to the engine comes in the form of the fuel injection system and strategy. Where the F1 car is optimised for wide open throttle driving, the road car must be docile enough to drive at low speeds, tickling along in traffic if needs be without any issue. That prompted a change in the hardware. F1 rules allow for a single injector per cylinder and that injector must spray into the combustion chamber (it’s called direct injection). The AMG One has that, but it also has an inlet port injector for each cylinder. This, in conjunction with unique injection strategies for the direct injector, allows for a wider range of operating conditions.

So where do the four electric motors come in? The first two are easy, as they each turn a front wheel, making the One all-wheel drive, or front-wheel drive in electric mode. There’s even a modest battery pack to allow just over 11 miles of silent, emissions-free driving. Which seems laughable when you look at the thing. The final two motors are closely integrated with the engine itself and are almost identical to what was used in the F1 car. The first is called the MGU-H (Motor Generator Unit Heat) and it sits on the shaft of the turbocharger between the compressor and exhaust-driven turbine.

Not that you’d recognise the turbocharger as one at a glance, as the compressor and turbine wheels are much further apart than usual. When acting as a motor, the MGU-H can turn the turbocharger to create boost, even when the exhaust gas flow through the turbine is relatively weak. Conversely, in generator mode, it can use excess exhaust gas flow to feed energy back into the car’s 8.4kWh lithium-ion battery pack. That’s no ordinary battery, either, as it uses the same fast energy draw, high-power density concept pioneered in the racer – something also found in the Mercedes-AMG GT63 S E Performance.

The last of the four electric motors is referred to as the MGU-K (Motor Generator Unit Kinetic). It’s a 120kW (161bhp) unit that spins to 50,000rpm. It directly drives the engine’s crankshaft via spur gears. In fact, this same unit is used for the front wheel motors. Hopefully you agree that the details of this engine are more fascinating than the headline figures. But they do enable straight-line numbers that include 0-62mph in 2.9 seconds, 0-124mph in 7 seconds, and 0-186mph in just 15.6 seconds.

As in Formula 1, however, a winning car is not made by a powerful engine alone, and the rest of the Mercedes-AMG One package promises to be up to F1 engine billing, too. The body and monocoque chassis are made from carbon fibre, for example, while the engine and its special seven-speed gearbox are load-bearing parts of the structure as well. The suspension is straight out of the motorsport playbook too, with transverse, adjustable push-rod spring struts, though as it’s a road car, it gets adaptive damping. Nonetheless, the ride height can be dropped dramatically – 37mm at the front and 30mm at the rear – depending on the driving mode.

Remarkably, the exterior design of the One hasn’t been radically altered from the 2017 concept vehicle, characterised perhaps by the vertical fi n that runs down its spine, alluding to the shape of the airbox in an F1 car. Apparently, it is functional, aiding high-speed stability and helping to clean up the air fl ow to the rear. Look closer and you’ll see that the design is very much led by the aerodynamic requirements of the car, but Mercedes has also managed to integrate the active aerodynamics in such a way as to create an astoundingly technical and impactful shape.

The louvres over the front wheels open or close, for example, while the front diffuser shape can be altered on the fl y and the intricate rear wing’s profi le and size also adapts to requirements. The operation of the various elements works under three modes – Highway, Track and Race DRS (Drag Reduction System), the latter designed for maximum speed. Mercedes claims that there is downforce produced from as little as 30mph in some cases – presumably when the driver chooses the track-only ‘Strat 2’ setting, inspired by an F1 car’s qualifying mode. In the AMG One, this firms up the suspension, lowers the car and provides maximum power from the engine and motors. That should keep things interesting for the driver, no matter what their level of experience. Like in a single-seater, the driver sits with their feet higher than their hips, and there’s even a bespoke F1-like steering wheel – though some of its labelling will be familiar to drivers of regular Mercedes cars. The main seat bases are integrated with the chassis, but there’s a small amount of adjustment in the backrest, supplemented by a movable steering wheel and pedal box. Though the cabin design is quite minimal, there’s all the expected equipment and technology on board as standard. We can only hope that some of the 275 buyers of this £2.5 million hypercar intend to use it to its fullest capability, as nobody else will have the chance to experience F1 technology on the road to the same degree.