This year, I filled a remarkable chasm in my motoring career: I went to my first ever Le Mans 24 Hours. Shocking, right? This was much so more than a mere box-ticking exercise, though, for Ferrari had laid on a selection of cars for us to drive over from the UK to France.

Two in particular stood out for me. One – the SF90 Spider – I’d not driven yet, while the other – Ferrari’s new 296 GTB Assetto Fiorano demonstrator – was making its debut in an, ahem, striking new livery. Let’s start off by addressing that, as it’s really raised the hackles of the social media commentariat. That, I suspect, is exactly what Ferrari had hoped for: after all, why else would you paint a car in Rosso Corsa with Baby Blue stripes and – yes, really – blue wheels? The look is, of course, inspired by ex-UK Ferrari importer Colonel Ronnie Hoare and his Maranello Concessionaires racing team livery. I say ‘inspired by’ because the Baby Blue isn’t quite the shade of Cambridge Blue than the Colonel deployed so memorably on his racers (yes, including the wheels), but we’ll let Ferrari off. Just be prepared for comments to fly at you from all sides whenever you stop (and occasionally when you’re still in motion). 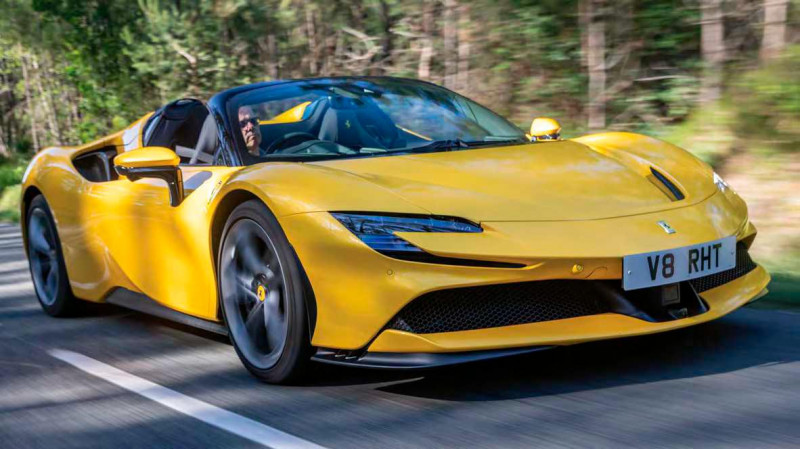 The track-focused Assetto Fiorano pack includes not only the optional stripe package (£14,400 to you, sir) but also firmer dampers, a high-downforce aero package, Lexan rear screen and extra carbonfibre goodies. Can’t say I noticed the 15kg weight saving but I certainly did feel the difference the dampers make. Changes of direction can be marshalled with an even more supernatural precision than standard-spec. The ride doesn’t seem to suffer too much, either, avoiding the crashiness that afflicts so many supercars.

Our car has Michelin Pilot Sport 4S tyres fitted, rather than the Sport Cup2R tyres that can be opted for if, say, you fancy doing a bit of track work. On French roads – which are, incidentally, every bit as iffy as the awful tarmac we suffer in Britain – the Pilots feel the right choice. They’re less darty and nervous than Cup2Rs, while still perfectly matching the 296’s short wheelbase and low centre of gravity. All in all, there’s a stunning sense of connection with the road: ultra-sharp turn-in, predictable flow through S-bends and changes of direction that put pretty much every other supercar in the shade. 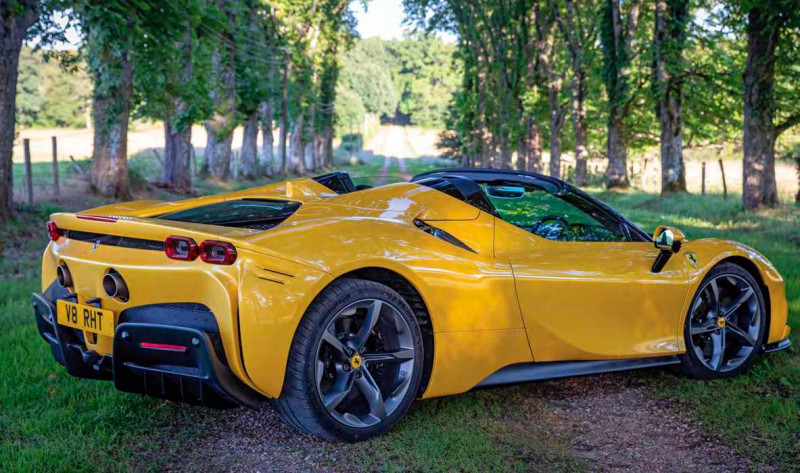 It’s so great to get back behind the wheel of the 296 GTB and revive my love affair with it. Default mode on start-up gives you battery power alone, which is eerily silent but nippy enough with 167hp of electric power. But the all-new 120-degree V6 engine is ever-ready to kick in as soon as you hoof your right foot. You’re instantly rewarded with a guttural growl and, as the revs rise, a gloriously high-pitched wail that’ll make you want to explore the 8500rpm peak as often as you can, with Ferrari’s hot tube resonator system funnelling itsblissful soundscape into the cabin. You’re even treated to pops and crackles every time you lift off.

Not that you need to rev this engine. Despite having a world record specific power output of 221hp per litre, the V6 is not remotely peaky when delivering its 830 horses. Two turbos and a single electric motor fill in any torque gaps like hot wax. There’s effortless low-speed thump when you want it, and phenomenal acceleration, too. The 296 GTB is epically, eye-poppingly fast: 0-62mph in 2.9 seconds, 0-124 in 7.3.

The eight-speed dual-clutch gearbox delivers unbelievably fast gearshifts, although I think the classic-style shift gate looks a bit gimmicky. I find myself using the paddle-shifts as often as possible but even if you stick in auto mode, the changes up and down are rifle-fast when the eManettino is in either ‘Performance’ or ‘Qualify’ mode.

OK, next up: the SF90 Spider. I’ve only recently driven the coupe Stradale version with the optional Assetto Fiorano pack, so the regular road-spec Spider makes a fascinating comparison. I have to say straightaway that the non-AF suspension suits the SF90 Spider much better. Lacking the optional stripes, Multimatic dampers, titanium springs, carbon doors and huge rear wing makes it subtler and better suited to road use.

The ride quality is much improved and you even have a ‘bumpy road’ button to deploy when the potholes appear, which you don’t get with Multimatic. The 1000hp under your right foot still makes this a very extreme machine, though. There’s way more power and torque than you could ever use on French A- and B-roads. The headline figures of 0-62mph in 2.5 seconds and 0-124mph in an astonishing 6.7 seconds tell only part of the story. At street-legal speeds – and let me say that it takes a very brave man to drive to Le Mans at speed camera-triggering speeds – it’s not even waking up. The electric motors – two of them in the SF90, versus only one in the 296 – do a thoroughly convincing job of filling any turbo lag the V8 has, with astonishing acceleration and torque available everywhere. One caveat to the sense-pummelling experience is the soundtrack; the SF90’s V8 lacks the aural splendour of the 296’s V6.

With the gendarmerie apparently lurking around every side street near Le Mans, I’m exercising serious circumspection here. Even deploying only a fraction of its potential, though, the SF90 Spider is exceedingly easy to drive fast. And with the retractable hardtop roof removed, the pleasure levels are – sorry – through the roof. The only serious problem is the complete lack of any – and I mean any – luggage space, meaning our gear for the return journey has to go in a support Peugeot. I suspect that’s how quite a few SF90 owners will be travelling in the real world. Or should that be surreal world? After all, this extreme Ferrari has all the airs of an otherworldly existence.

Just outside Le Mans circuit is the Charles Pozzi dealership, which has opened up to host a private viewing of the forthcoming 296 GTS, the open-top sister to the 296 GTB. The covers come off to reveal a roof-up car, which looks surprisingly like the 296 GTB coupe. Almost immediately, the retractable hardtop is deployed – a procedure that takes 14 seconds – and the 296 magically transforms. OK, not such a dramatic transformation, perhaps: the result is effectively a fancy targa top, although the vertical glass rear screen behind the passengers can now be raised and lowered (in contrast to the GTB’s fixed screen). There’s a natty new transparent panel over the engine cover, too.

The A-pillars, B-pillars and sills have been strengthened to maintain torsional rigidity, adding 70kg to overall weight, but mechanically the GTS is identical to the GTB. Its top speed of 205mph and 0-62mph time of 2.9 seconds are unchanged but the Fiorano lap time (1min 21.8sec) is 0.8sec slower than the coupe.