When Darren and Lucy Arnold bought an early E-type 20 years ago, they didn’t know the car had a fascinating motorsport pedigree. We investigate the newly restored car’s past.

HIDDEN HISTORY: E-TYPE WITH A MOTORSPORT PAST

Not knowing anything is the sweetest life,” wrote the Ancient Greek playwright, Sophocles. I’m sure my maths teacher would disagree with that statement as would Lucy and Darren. Despite owning their early E-type for over two decades, it’s only recently they’ve discovered it has a motorsport history, taking part in the 1964 Malaysian Grand Prix amongst many others. 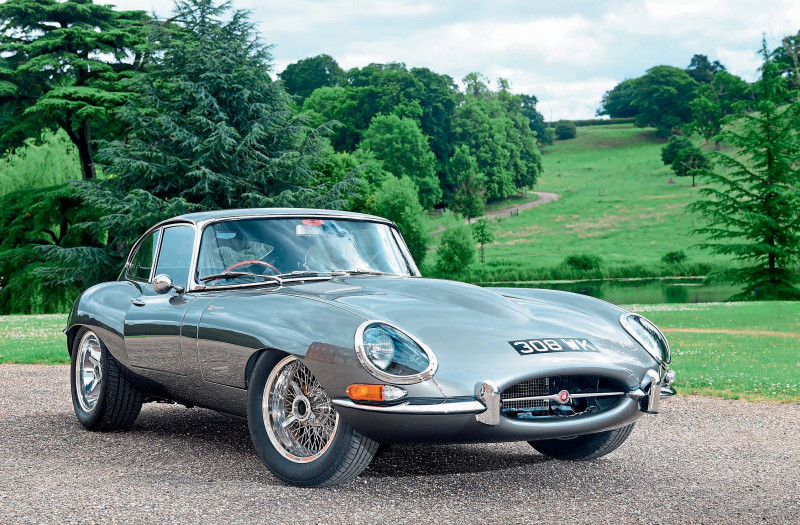 The car – a fixed head coupe with chassis number 860190 in Opalescent Gunmetal Grey – was built on 26 January, 1962 which makes it one of the first right-hand drive examples to have the internal bonnet locks that had arrived the previous winter. Registered 308 WK on 14 March, it was bought directly from Jaguar by a former British army captain, John Walker Wright, who was living in Federation of Malaya (known as Malaysia from 1963). Something of a genuine war hero, he was awarded an MC for courage and leadership at the Battle of Kohima that took part in northeast India between April and June 1944. 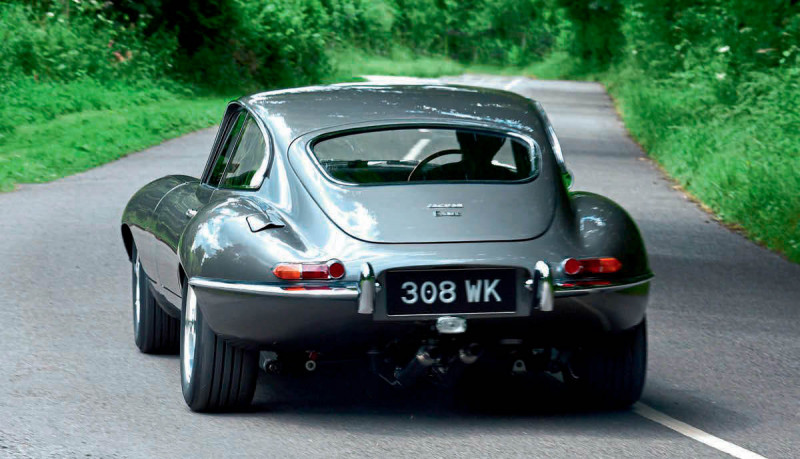 Born in Paignton, Devon on April 12, 1922, Wright was educated at St Paul’s before going to Cambridge University in 1940 to read engineering, signing up to join the army six months later.

Wider rear wings were fitted during the restoration but are in keeping with the car’s competition past.

After being demobilised in 1946, he returned to Cambridge to finish his degree before heading to Malaya to join its Public Works Department as an engineer. He moved to the World Bank 14 years later which would see him travel extensively across Asia. Wright retired to a Gloucester village in 1991, living in a house he’d built himself. 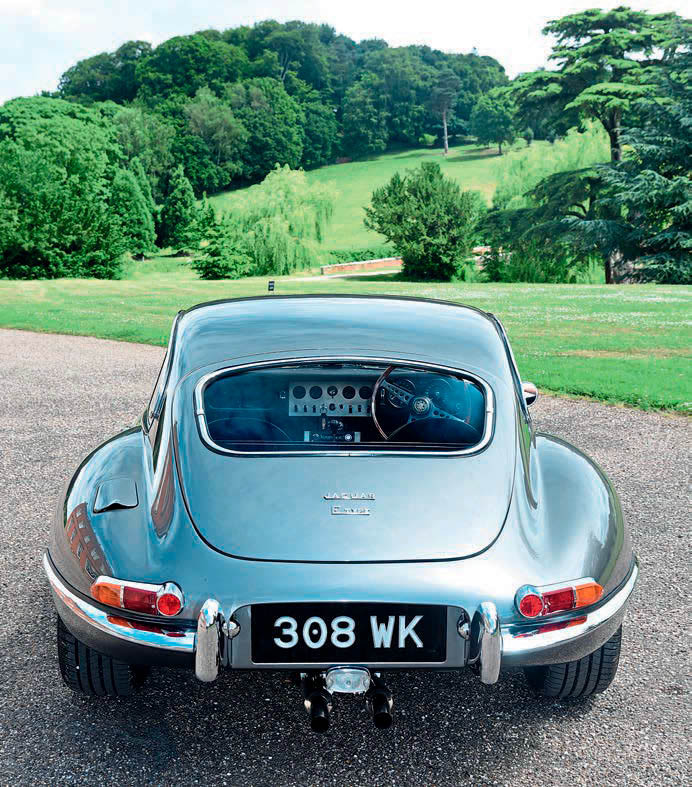 After passing away in June 2002, according to his obituary in The Telegraph, he was often seen driving his elderly Volvo at high speed, often in the middle of the road. “The roof of his convertible model having broken (in the down position), Wright could be seen driving on rainy days with an umbrella at his side which he would erect in heavy traffic, blithely indifferent to the astonishment of other drivers.”

But in his younger days, Wright had been a keen amateur racer and while still in Malaya first competed across the region with a Ford Zephyr which was replaced in 1962 by the E-type.

With Wright always planning to race the car, he had the axle ratio and a wide angle cylinder head with twin DC03 Webers from a D-type fitted, several aluminium panels plus other modifications. The car was finally delivered to Wright via Jaguar’s distributor in Singapore, Cycle&Carrier, when it was locally registered JC7. 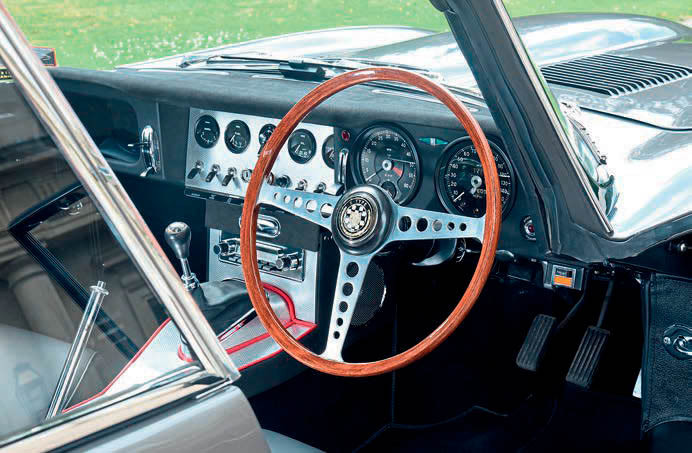 Over the next couple of seasons Wright became a familiar sight at Malayan races when by being occasionally erratic but always fast, he would often finish well. These included second place at a ten-lap Johore Sports Car Race in September plus victory of 35-lap Formula Libre Grand Prix in November the same year.

In 1964 he entered the car into his biggest race so far, the Malaysian Grand Prix held at the Thompson Road street circuit in Singapore which was organised by the county’s Ministry of Culture. As a Formula Libre event, it was open to a wide variety of cars from all over the world. 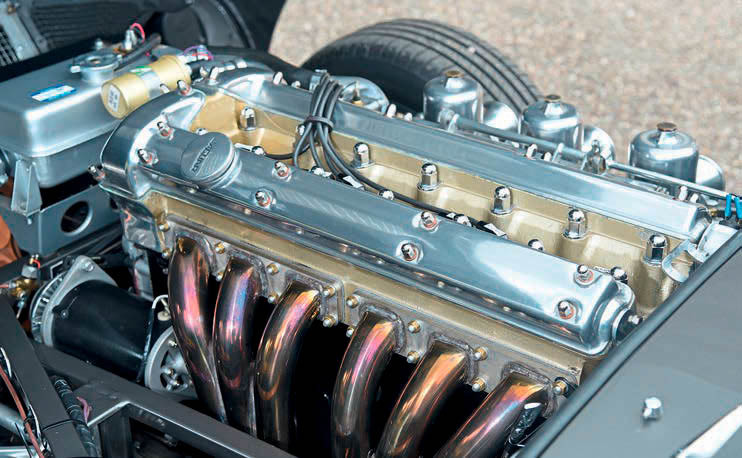 “The formidable challenge from overseas has not deterred local representatives, some of whom are well-known to the racing circle,” said a press statement. “In the racing car section we have, among others, John Wright (Jaguar E-type), Alan Bond (Lotus 23), Wong Whye Hong (Lotus 23) and Mike Hung (AC Cobra.”

Unfortunately, Wright crashed heavily during the race which killed a marshal and damaged the car so badly it needed a new shell. Although it was entered into the following year’s Grand Prix, he pulled out perhaps due to injuries sustained in the accident. The car was advertised in a local Singapore newspaper in July 1965, the advert reading, “E-type Jaguar JC7. Available September 1965 Listed excellent condition. Recently fitted new factory body. Extras aluminium bonnet, door, racing wheels, competition clutch, D-type head, Weber carburetors three axle ratios, 31,000 miles. This potent car goes for reasonable price.”

What happened next isn’t known and the car didn’t reappear until the early 2000s when, still in Malaysia, it was bought at a Singapore auction by the E-type Centre who repatriated it to the UK. The now red coupe soon caught the eye of bodywork specialist and E-type enthusiast, Darren Arnold, while working at E-type Centre’s Warwickshire premises as a contractor.

He tells me that despite looking presentable, it needed huge amounts of work and due to several other projects, he could only justify the purchase if he bought it for his wife, Lucy.

Due to those aforementioned projects, the car wasn’t touched for well over a decade but a looming celebration kickstarted the project.

“When it was the E-type’s 50th anniversary in 2011 we said we’d get it done one day,” Lucy tells me. “Then a couple of years ago Darren said we’d get it ready for the 60th so that’s when he started the restoration. In all honesty I felt it would never get done since it was such a big task!”

Darren did much of the bodywork himself, aided on the mechanical side by his friend, the late Ian Stoker, who had worked for several Jaguar specialists including XK Engineering. It was when the pair began stripping the car that they began to realise it was something different. “I remember the moment when Ian to said to me, ‘Someone has raced this car,’” he says. Although the D-type head was no longer fitted, there was a Borg & Beck twin plate clutch as used in late D-types and the camber of the rear wheels had been altered.

Plus, the rear shock absorbers were original Koni dampers from the Sixties. “When I got in contact with Koni and gave them the serial number they said they were the first of the racing style of shock absorbers the Dutch company had started producing in the late Fifties.” Amazingly, Koni recommissioned the shocks for free meaning the car wears the same dampers that Wright himself had fitted 60 years ago. The front dampers had been changed so Darren replaced these with a pair of modern Konis that were the closest match to the rears.

When it was down to a bare shell, Ian then pointed to two brackets on the bulkhead that hold the centre console in place and explained that Jaguar had changed how the console was mounted in 1963. “Ian said although the log book says it was registered in 1962, this car is from 1963 onwards,” continues Darren. At this point he worried that he’d bought something not quite right. “But when we found out its race history it all started to make sense,” he says. “After crashing in 1964, Wright had bought a new factory shell from Jaguar but of course they didn’t have a 1962 shell; they just took one off the line that had that modification.” Ian then rebuilt the engine as a stock 3.8 while another of Darren’s contacts, Keith Reynolds at Ken’s Customs, did the interior. Darren and Lucy specified black rather than the red leather it would have had originally, plus Alcantara for the dash top and headlining.

Darren did all the bodywork which included fitting new wider rear wings from RJ Panels Ltd to make room for a set of larger custom made wire wheels by Turrino (6x16 at the front and 7.5x16 at the rear). To aid stopping power, Darren specified four-pot calipers and vented discs at the front sourced from Coopercraft.

Darren is quick to pay tribute to the help Jaguar parts specialist Martin Robey Ltd offered. “They gave us detailed information on what the car should and shouldn’t have,” he tells me. “I’m not a specialist in building Jaguars and without the help of Robey’s helpful staff I couldn’t have done it since they were very knowledgeable especially about these early E-types.” When Darren asked Lucy if she wanted a specific colour for the exterior, she suggested Gunmetal Grey despite not knowing that was the car’s original shade!

It was when the restoration was getting close to being finished in early 2020 and Lucy sent off for a Jaguar Heritage certificate that the pair discovered the E-type’s racing past.

“When the car was reimported from Asia in 2000 it received an age-related plate but after we got the Heritage certificate in January, 2020, we saw it was originally registered 308 WK,” explains Lucy. “Since it’s a 3.8-litre, we liked the idea of getting the original registration so I contacted the DVLA but we couldn’t have the original number plate unless we had documentation from when it was first registered in 1962.” In March, Lucy wrote to the Coventry Archives which are housed in the city’s Herbert Museum which replied to say they had Jaguar’s original production ledgers which showed the car’s chassis number together with the 308 WK plate which was enough for the DVLA to reissue the number.

“They also sent the original owner’s details,” she continues, “so I looked up J W Wright on Google and that’s how we found out about the car’s racing history.” With the help of historian Eli Solomon who wrote a book about the history of the Singapore Grand Prix, Snakes&Devils, they’ve managed to trace the history of Wright’s involvement in the car, amazed the battered red coupe they bought 20 years ago has this secret former life. So proud of their car’s racing past are the pair that they have added a hand-painted emblem on the offside front wing that celebrates Wright’s entry into the 1964 Malaysian Grand Prix.

By finishing the Jaguar in May 2021, Darren met his target of getting the car ready for the E-type’s 60th anniversary, attending the E-type Club’s event at Shelsley Walsh hillclimb in June when its condition and history impressed all who saw it.

Thanks to the wider arches and bigger wheels the car has a very aggressive stance but in my eyes the modifications are very much in keeping with its racing history. I can imagine these are the kind of changes Wright himself would have made if he’d carried on racing the car. Plus, the level of Darren’s workmanship is terrific and although he admits it was resprayed in a barn, the metallic grey has a deep, rich lustre.

Even if the car’s history wasn’t known, Lucy’s E-type would still be a good-looking and desirable car. But learning about its previous life on the track at the hands of what sounds like a remarkable man makes ownership for her just that little bit sweeter.

Thanks to: Lucy and Darren

BELOW: XK engine was specified when new with a D-type head and triple Webers. ABOVE: Coopercraft brakes hide behind the wires

RIGHT: Transfer is a nod to the car’s fascinating past life

ABOVE L–R: The car achieved second place in the 1963 Johore Grand Prix. Wright seen in action in Kuala Lumpur in 1963. The 1964 Malaysian Grand Prix sawWright crash so heavily that a new bodyshell was needed.

BELOW: Dash top is trimmed in alcantara