The Huracán has reached the end of the road in series-production form, but it’s going out on an all-time high.

Auto industry convention dictates ageing model lines should be replaced as soon as possible for fear of falling behind competitors. However, it would appear nobody told Lamborghini, who are still cheerfully spinning new models from the Huracán almost nine years after we first saw it, back in the winter of 2013. For once it would appear being last to replace your supercar is a distinct advantage. Not only is the Huracán the last of its kind – that’s to say still using a naturally aspirated, non-hybrid powertrain – but in squeezing the Huracán until its pips squeak, Lamborghini has released a string of driver’s cars blessed with extraordinary ability and irresistible appeal. 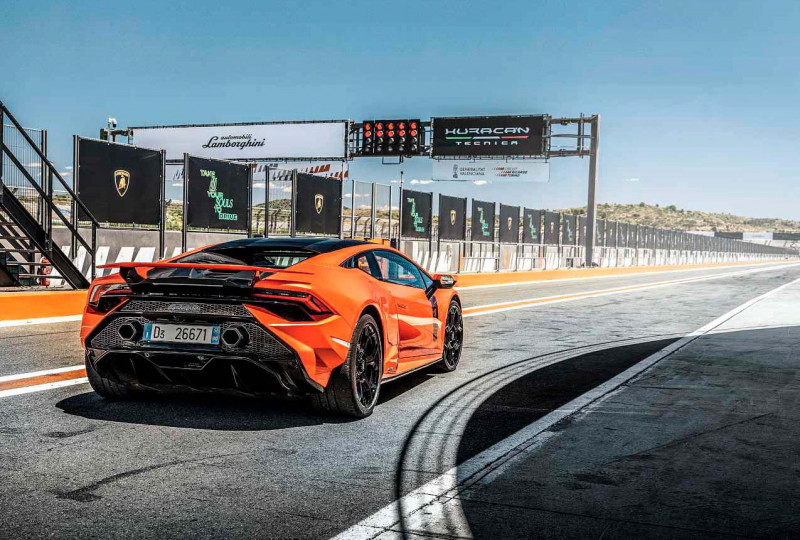 Latest of these is the Huracán Tecnica. With the exception of a promised ‘surprise’ send-off – our money’s on the Safari-style Sterrato making limited production – the Tecnica is the final series-production Huracán to be released before Lamborghini’s best-selling model is replaced by an all-new hybridised supercar.

The omens for the Tecnica are good, it being a mash-up of the sublime Huracán Evo RWD and hardcore STO – cars we have fallen for in a big way over the last 18 months. It would be oversimplifying it to say the Tecnica is Lamborghini’s GT3 Touring, but the notion of a mildly toned-down STO shorn of its track-warrior bodywork is not so far from the mark.

As ever, the devil is in the details. Yes, it takes its howling 631bhp 5.2-litre V10 from the STO, but the styling, chassis set-up, aerodynamics and specifics of each dynamic mode are unique to the Tecnica.

Looks-wise there’s much to take in. The front end has received the most attention, with Y-shaped slots, inspired by those on the Terzo Millennio electric hypercar concept, bursting from each headlight. They help generate drag-reducing ‘air curtains’ along the flanks – a first for the Huracán – while a new front splitter balances the front-end downforce and directs cooling air to the brakes.

The side windows and upper intakes have also been tweaked to resemble those of the Essenza SCV12 track car. A new vertical rear window improves visibility and the new carbonfibre decklid is festooned with gills to allow hot air to escape and give glimpses of the V10 engine beneath. The rear bumper is also new, with cutaways allowing hot, turbulant air to escape. Big-bore exhaust pipes poke from hexagonal surrounds, with the modest fixed spoiler completing a sharp and tidy functional makeover.

Possibly the most impressive thing about the restyle is its efficiency. With 35 per cent more rear downforce, 20 per cent less drag and a better overall aero balance than the Evo RWD, the Tecnica cleaves the air more cleanly yet feels more stable at high speed; considered improvements that are indicative of Lamborghini’s desire for the Huracán to go out on a high.

Chassis-wise the Tecnica occupies the space between the STO and RWD with bespoke recalibrated settings within the LDVI’s (Lamborghini Dinamica Veicolo Integrata) familiar Strada, Sport and Corsa driving modes. These make full use of the Huracán’s adaptive damping (the tune of which is closer to the STO than the RWD), rear-wheel steering, torque vectoring and traction control systems to broaden its dynamic repertoire and bring out different characters. It sounds contrived, but such is the conviction and enthusiasm with which the engineers describe it, getting to know the multi-faceted Tecnica – first up in the hills north of Valencia before attacking the tricky twists and turns of the Circuit Ricardo Tormo – is an intriguing prospect.

The roads that lead away from Valencia up into the hills are rough and sun-baked, so there’s nothing to be gained from immediately jumping into Sport mode. In truth, while Strada may be the softcore dynamic mode it works impressively well with the lumpen road surface, allowing plenty of time to settle in and get comfortable. There was a time when Lamborghinis were uncompromisingly physical machines. The Tecnica might be old-school compared to its Ferrari and McLaren contemporaries, but it’s still a cinch to jump into and drive. I don’t hold any truck with the concept of the so-called daily driveable supercar (why would you want to do that?), but there’s no question this Huracán makes easy work of driving drudgery. What’s more it brings some spice, every mile dusted with a little magic.

It’s when you reach roads that drape themselves across serious topography that the Tecnica comes into its own. In fact, when the opportunity arises, the way you can release its performance is nothing less than sensational. You really shouldn’t be able to so readily exploit a rear-drive, mid-engined supercar with 631bhp, yet the Tecnica is so transparent in its behaviour and so accurate and progressive in its responses that its genuinely playful. Sport mode is perfectly suited to the mountain roads of the test route, allowing enough leeway to let the rear end slip and slide under power, but with reassurance that the traction control is always there in the background ready to catch the car with soft hands.

It doesn’t take long to really get dialled in to how the Huracán reacts. The V10 has tremendous reach combined with a generous spread of torque and instant throttle response. Better still, the fidelity with which you can modulate the throttle is so fine it’s possible to make minute adjustments to get the car balanced just-so. Modern turbocharging is a marvel, but you can’t beat natural aspiration for immediacy or exactness. And the soundtrack is really something. Mellow at low revs and modest throttle openings, Strada mode enables progress with little more than a murmur, the V10 only opening up if you really extend it. Sport and Corsa bring more vocal range and volume, from bassy tones at low rpm through a rousing baritone midrange to the full napeprickling Nessun Dorma when you keep it pinned to the 8500rpm limiter. It really is a noise from the gods.

Don’t for a moment think the Tecnica is all mouth and no trousers. The steering – that most critical point of contact – has terrific clarity with admirable consistency of weight and response. It’s not tingling with feedback, but what you do feel builds an accurate picture of how much grip you have to work with. Crucially, it’s quick-witted but not exaggeratedly so, which means you soon settle into the process of threading the Tecnica down the road.

Gentle curves are taken with a slight squeeze of lock – guided as much by thought as actual steering input – while more meaningful turns are taken with a smooth, accurate roll of the wrists. Hairpins reveal a rare appetite for tight turns; one that’s heightened by the Tecnica’s rear-wheel steering, which has the virtual effect of shortening the car’s wheelbase in low-speed corners. It seems to put more energy into the initial rotation without asking more from the front tyres or making the handling feel nervy or unstable. Conversely, in high-speed corners the rear-wheel steering serves to virtually lengthen the wheelbase, thereby making it feel more stable in situations such as quick direction changes.

Drop the road tester-y-ness and the Tecnica is one of those cars that just makes you buzz. The engine noise and sense of occasion, straightline pace, levels of grip and stopping power and uncanny elasticity of its limits are amongst the best you’ll encounter. Likewise the seven-speed DCT transmission. This is one of those rare supercars that will nurture novices just as readily as it will satisfy seasoned hands.

Having spent half a day hooning through the hills we return to Valencia for our session at the Circuit Ricardo Tormo. Track driving on new car launches often consists of mildly frustrating ducks-and-drakes laps, but thankfully Lambo elects to give us one-on-one runs chasing an STO driven by one of its Squadra Corse instructors. As you can imagine, this basically means you’re driving like your trousers are on fire.

The track session Tecnicas are shod with more aggressive Bridgestone Potenza Race rubber (as developed for the STO) instead of the Potenza Sports fitted to the road route car. It makes a difference in terms of outright grip and lap time, yet the progression and fluidity that makes the Tecnica so approachable on the road are still present, even when pushing straight to and sometimes beyond the limits of the tyre and chassis.

We run laps in Corsa mode, which works just fine. There’s enough slip permitted to just overrotate the rear tyres, but not enough to require anything more than a measured quarter turn of corrective lock. It’s a more precise leash than Sport offers you on the road (Sport is freer in terms of pure traction intervention because you’re not generating the same lateral loads as you would on track), but only ever gets in the way when you’ve misjudged something. Disable the electronics and the Tecnica will drift for days.

Driving done, it’s time to let the Tecnica experience percolate. Criticisms are few and far between. The main one centres upon the overly sharp brake feel and response at the top of the pedal. Outright braking power and stamina are top notch (the Technica uses Lamborghini’s regular CCM brakes and not the fearsomely expensive CCM-Rs fitted to the STO), but there’s a fraction of dead travel that makes your initial input a bit of guesswork. It’s more of an issue at lower speeds, where you just want to breathe on the pedal and gently lose 5 or 10mph. It’s a frustration rather than a deal breaker, but they should be better, especially as the rest of the car is so finely honed.

One other observation is there’s a significant shift in ride stiffness when you switch from Strada to Sport, with another less pronounced step in Corsa. Whether this hobbles the Tecnica on UK roads we’ll have to wait and see, but it did feel a bit sharp on some of the admittedly raggedy Spanish hill roads. Unfortunately, it’s a reminder of the biggest frustration with the Huracán: its lack of ‘Ego’ mode. Being able to mix and match your preferred settings from Strada, Sport and Corsa would really be the cherry on top, but sadly it’s the one sign of ageing the Huracán can’t hide.

This being the last Lamborghini of its kind is naturally a cause for a bit of reflection. The V10 ‘baby’ Lambo and I go back a long way. Right back to 1995, in fact, when I drove the one-off, fully functional Cala concept for Performance Car magazine. It would be seven long years before Lamborghini committed to building the Gallardo. Now, 20 years after that, that bloodline is coming to an end with the last of the Huracáns.

It has taken the bulk of those two decades for Lamborghini to really find the sweet spot with its entry-level supercar. Now that it has, cars like the Tecnica serve as vivid reminders of what we’re losing. Not only in the transition to hybrid, but with the earlier widespread adoption of turbocharging. Whichever way you slice it, you can’t beat a bigcapacity naturally aspirated engine with lots of cylinders and a hunger for revs.

The Tecnica is stunning. In many ways a throwback, yet also proof that technology can be used to enhance the driving experience without intruding. With all the performance you could ever wish for, plus a nuanced delivery that spans everything from the brain-off urban crawl to brainout hot laps, the Tecnica is that rarest of things: a contemporary supercar that doesn’t rely solely on speed to feel special.

Much like stars, some supercars shine brightest right before they die. The Huracán has never burned brighter.

Bottom left: cockpit trim can be tailored towards luxury or sportiness. Below left: unhybridised, naturally aspirated V10 has aged beautifully – we’re going to miss it.