Toyota’s high-performance driver-orientated GR brand has captured the hearts of enthusiast drivers. All hail the return of the three-pedal sportscar

Ten years ago, Toyota caused a stir within the motoring community with the original Toyota GT86. It has sold more than 200 000 units internationally since its launch in 2012. This was thanks to an attainable price, engaging driving dynamics and a lightweight yet usable 2+2 configuration. Its replacement, the now rebranded GR86, aims to remain true to the sportscar character of its rear-wheel-drive predecessor while improving on the recipe with a new, larger-capacity, naturally aspirated engine. We attended the European dynamic press launch for a first drive of the manual-transmission Toyota GR Supra and GR86. 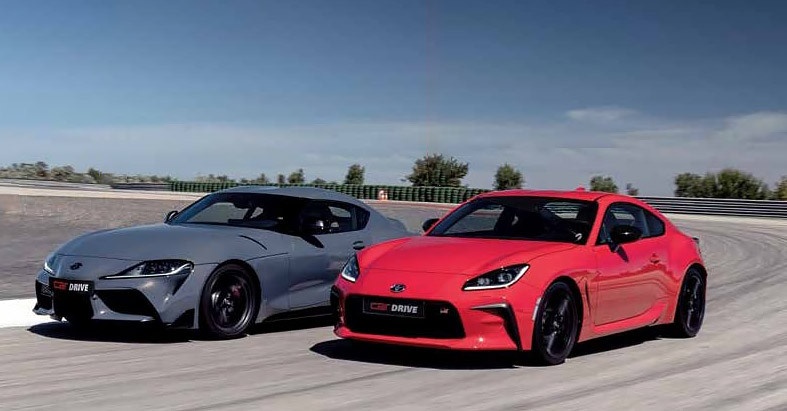 CAR has been following the development of Toyota’s high-performance arm, the Gazoo Racing (GR) brand, closely and no doubt you have, too. Locally, GR initially teased us with the effervescent Yaris GRMN in 2018 to give us a taste of what was to come. This was followed by the return of the legendary Supra nameplate. We tested and enjoyed two versions during our 2020 and 2021 Performance Shootouts. The brand then launched the massively entertaining GR Yaris in 2021 and by the end of this year, both the manual-transmission GR Supra and new GR86 will land on our shores. These two vehicles are rare as they demonstrate Toyota’s dedication to driver engagement despite the clear move towards EVs and the steady decline of three-pedal sportscars.

In terms of exterior design, the GR86 is more of an evolution of its predecessor than a complete overhaul, inspired by elements of the iconic AE86 Corolla (Hachi- Roku to Initial D fans) and the svelte 2000GT. This may be too conservative a design approach for some, but the short overhangs, low-slung look and typical front-engined, rear-wheel-driven proportions should age well.

The new car takes up nearly the same amount of space on the road as the previous one, but sits even lower. Height decreased by 10 mm and its wheelbase is now 5 mm longer. As such, the centre of gravity has notably dropped by 1,6 mm and the driver’s hip-point has been lowered by 5 mm. It offers a satisfying driving position for most.

Step inside and the evolutionary design philosophy continues. The minimalist drivercentric cabin remains and, thankfully, Toyota has retained the satisfying click of physical controls. Being built to a budget, there are hard plastics in the cabin, but low-glare materials on the dashboard, minimal piano black items and soft-touch materials are used on the frequently touched surfaces. Visibility is good, too, thanks to a reasonable amount of glass and narrow A-pillars, while the flanks on the bonnet allow you to easily judge the extremities of the elongated nose.

The Alcantara and leather combination seats are a highlight, offering both comfort and support; you could easily cover longer distances in them. The rear folding chairs are not suitable for adults, but they do add a sense of practicality over a two-seater coupé, while the boot remains usefully proportioned with the seats folded.

One noticeable revision for the interior of the GR86 is it now features a high-definition driver’s display with a central rev counter. The screen is navigated via controls on the steering wheel and it’s customised depending on the drive mode selected. In Track mode, for example – the setting we used while on the Monteblanco in the South of Spain – the display read-out morphs into a central bar focusing on the r/min redline, gear selected, speed and oil temperatures.

Underneath the sculpted bonnet lies the main update for the GR86. A 172 kW2,4-litre boxer engine replaces the previous 147 kW 2,0-litre.

The increase in power is appreciated; however, the figure that makes the most meaningful difference is the additional torque. The GT86 delivered 205 N.m at a lofty 6 600 r/min, whereas this new engine provides peak torque of 250 N.m at 3 700 r/min. By adding more twisting force far lower down in the rev range, the GR86 feels peppier and more responsive at lower speeds. This makes it a deeply satisfying drive at regular speeds, something driving enthusiasts who value their licences will appreciate. The updated engine has all but transformed the feel of the vehicle, offering smooth acceleration.

Faux engine noise is played into the cabin and sounds far better than the previous car. This synthesised sound is the norm these days but I’d like the option to turn it off, as it becomes increasingly evident as the revs build.

We had just three laps to experience the GR86 on the Monteblanco circuit and with Track mode engaged and the traction control dialled back, it was clear at the first sharp right-hander, the new quick-ratio electric steering was alert and precise giving a decent sense of the grip available from the Michelin Pilot Sport 4 tyres. The longer wheelbase provided impressive balance and predictability while the additional performance means with a mid-corner stab at the throttle, the rear will break traction in a manageable fashion.

Out on the road, the suspension felt well damped and admirably dealt with the odd bump and pothole. On tight twisting sections, the body roll was kept in check even when pressing on. The latter is thanks largely to the 50% increase in overall body rigidity. The additional torque enabled swift overtaking manoeuvres while cruising at the indicated 120 km/h speed limit in sixth gear. Around the tight and bustling city streets of Seville, the compact dimensions made it easy to thread through traffic. When combined with good visibility, this is a necessity for a performance car that could be used every day.

After the short track stint and road drive on idyllic Spanish backroads, what is the key takeaway? The GR86 is one of the last naturally aspirated RWD sportscars with a manual ’box. This on its own is enough to be celebrated. Toyota has listened to the comments of owners and enthusiasts and refined the recipe, but has remained true to the original brief. With grippier tyres, a satisfying chassis balance, predictable on-the-limit handling, a functional driver-focused cabin and more torque available earlier in the rev range, the GR86 is a compelling package., The question of local pricing remains, though; we expect it to come in at around R700 000 to R750 000 placing it squarely against some turbocharged front-driven hot-hatch rivals like the BMW 128ti, Hyundai i30N and VW Golf 8 GTI. With the Mazda MX-5 no longer available on the local new-car market, the GR86 should be in a class of its own when it arrives in September. We are keen to drive it extensively and experience it on some of our favourite driving roads.

The opportunity to get a taste of what the new Supra manual was all about was limited to just six laps around the Monteblanco track. It may not sound like much, yet after the first warm-up lap, the car had already made a lasting impression. It has the same recipe: a short wheelbase for agile handling, a connected rear end developed to be easily controlled beyond the limit of grip, and the sonorous BMW-engineered B58 six-cylinder engine. The addition of the six-speed transmission all but transforms the Supra into a fun skid-ready machine. Compared to the 8-speed auto, sure it’s slower, but outright speed isn’t the point here. It’s the little details that make this model stand out. The centre console has been rejigged to accommodate the new shifter while the transmission is a combination of off-the-shelf parts from ZF. Toyota also took the time to tweak gear-knob weights to find the ideal shift feel, beginning with a 68 g unit, moving to a 138 g item and then settling on a hefty 200 g knob. The result is a meaty, slick shift; the added mass provides enough inertia for changes without feeling overly cumbersome through the gate. The clutch is weighted to match with a fuss-free operation and the pedals spaced ideally for heel and toe. The iMT function will rev match automatically, but this can be turned off. After our handful of laps, it became clear the Supra manual will be an instant hit with enthusiasts. The added engagement from the manual gives an already characterful sportscar a deeper sense of personality. It now offers analogue fun and involvement that is increasingly hard to find in modern sportscars and will be available for South Africans on order only.

01 The red Supra badge is the only exterior sign that this Supra is a manual. 02 Low centre of gravity ensures agility and control when exploring the limit.

01 Both the Supra and GR86 have purposeful rear-wheel- drive sportscar proportions. 02 With 173 kW and a lightweight construction, the GR86 is playful, yet intuitive to control. 03 The interior is an evolution of the outgoing design with crucial physical controls remaining. 04 The 86’s shifter is a pleasure to hold and offers a satisfying shift action. 05 Folding rear seats add a pinch of practicality. 06 The new 2,4-litre engine offers greater performance than before and at lower revs.