Porsche Santa Clarita, a member of the Galpin Motors family, unveiled its 1974 911 Carrera Targa ‘Safari’ at the Werks Reunion in Monterey, California, as part of the USA’s latest Porsche Classic Restoration Challenge competition. The entries run the gamut from the 1950s to the 2000s, from 75bhp to 612bhp, and from rear- to mid- and front-engine layouts.

The USA is home to more classic Porsche sports cars than any other territory. After decades on the road, some will inevitably be in need of a little extra care. Enter the Restoration Challenge, where Porsche Classic encourages North American dealerships to acquire a legacy model due expert technical attention. Entrants reside across the whole of the USA, fielding various 356 models, five generations of the 911, transaxle models (924, 944, 968 and 928), as well as modern classics, such as the first-generation Boxster and the Carrera GT. Each vehicle is undergoing restoration in the best possible hands: Porsche-trained technicians who have a portfolio of more than sixty thousand unique Porsche Classic Genuine Parts at their disposal. In fact, eleven of the participating dealerships are designated Porsche Classic Partners, going above and beyond in their commitment to keeping historic Porsches on the road and driving just as well as the moment they left the factory.

A panel of experts from Porsche Cars North America (PCNA) will judge each project’s progress based on criteria including standard of restoration (not limited to engine, suspension, bodywork and interior), but also supporting documentation, like the Porsche Classic Technical Certificate. 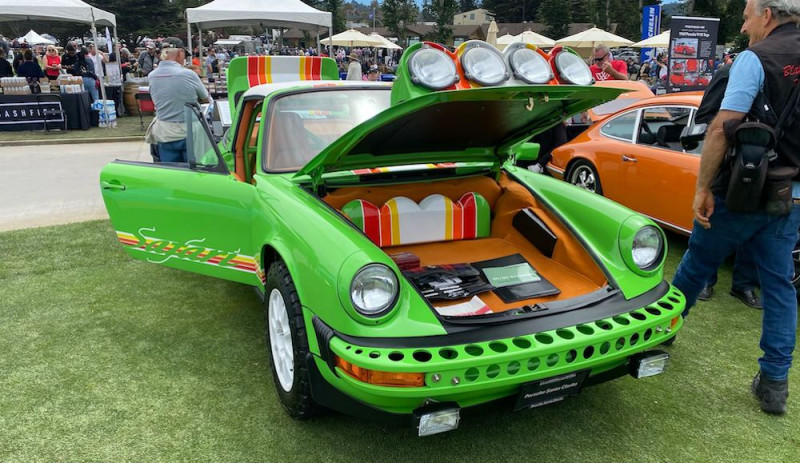 Porsche Santa Clarita’s 911 build started with chassis 161 of only 246 road-going US-spec Targa models for the 1974 model year and is powered by a modified 2.7-litre normally aspirated flat-six. The updated boxer features larger cylinders (92mm, as opposed to the standard 90mm), bumping output to 180bhp. The brakes are from a 986 Boxster, while a rear seat delete saves weight. The steering system was restored with new seals and gaskets.

The car retains its Targa top, but gains a ducktail spoiler. The exterior colour is Lime Green, an iconic Porsche shade from the 1970s. The colour-coded custom-built roll cage adds safety and additional rigidity.

Suspension upgrades include a Stage 4 Elephant Racing Safari System combined with hollow RSR-style anti-roll bars, MCS coilovers and heavy duty BF Goodrich All-Terrain K02 tyres. Lighting has been enhanced by way of a TRE Motorsports lamp pod kit fixed to the front lid. Drilled bumpers feature at both ends of the car, which is decorated in custom decals. 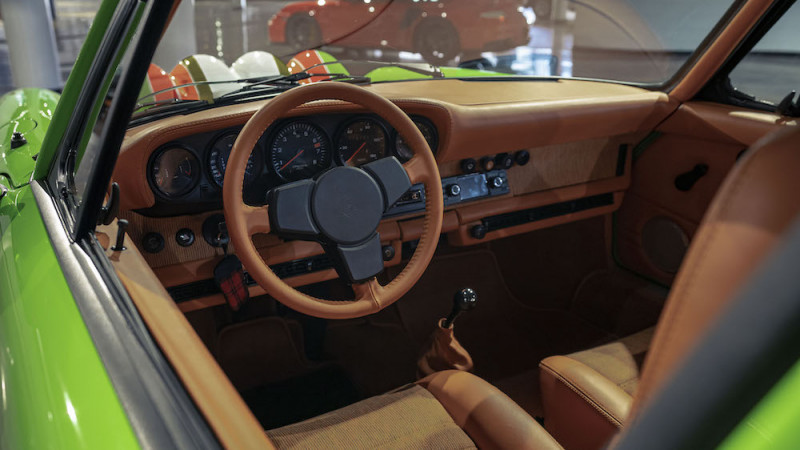 The interior has been kitted-out with orange leather, a fully rebuilt climate control system (using OEM components) and a custom audio system centred around a Porsche Classic Communication Management head unit, complete with integrated satellite navigation. “It’s an honour to once again participate in the Porsche Classic Restoration Challenge,” says Beau Boeckmann, President and Chief Operating Officer for Galpin Motors. “Our goal with this Targa was to build a 911 modified like it might have been in period, when many marque enthusiasts were wowed by the Safaristyle Porsches which raced in East Africa.

Believe me when I say my team can’t wait to spend time in the dirt with this car!” Based in North Hills, California, Galpin Motors has established itself as one of the foremost automotive dealers in the USA. Family-owned and operated since 1946, Galpin’s list of automotive brands includes Volkswagen and Porsche, but also Ford, with which it consecutively held the number-one dealer title for a staggering twenty-nine years. To find out more, visit galpin.com.